“We are excited to welcome the first cohort of the Native American Writers Seminar,” said Jennifer Loren, director of Cherokee Nation Film Office and Original Content. “Each of the selected fellows can serve an integral role in creating and developing indispensable Native American content within television and film. It is an honor for our film office to partner with the Native American Media Alliance to provide necessary resources, mentoring and much more to support our shared endeavor to bring authentic Native representation throughout these industries.”

All participants chosen for the seminar will workshop an existing script with creative executives from Bad Robot and Skydance, agents from Buchwald and Kaplan Stahler, and showrunners from CBS and ABC.

The program provides intensive development workshops as well as rigorous writing sessions. In addition, the seminar will bring in representatives from prestigious fellowships and past participants of Native American Media Alliance writing programs to offer insight into career development, professional growth and new writing opportunities. 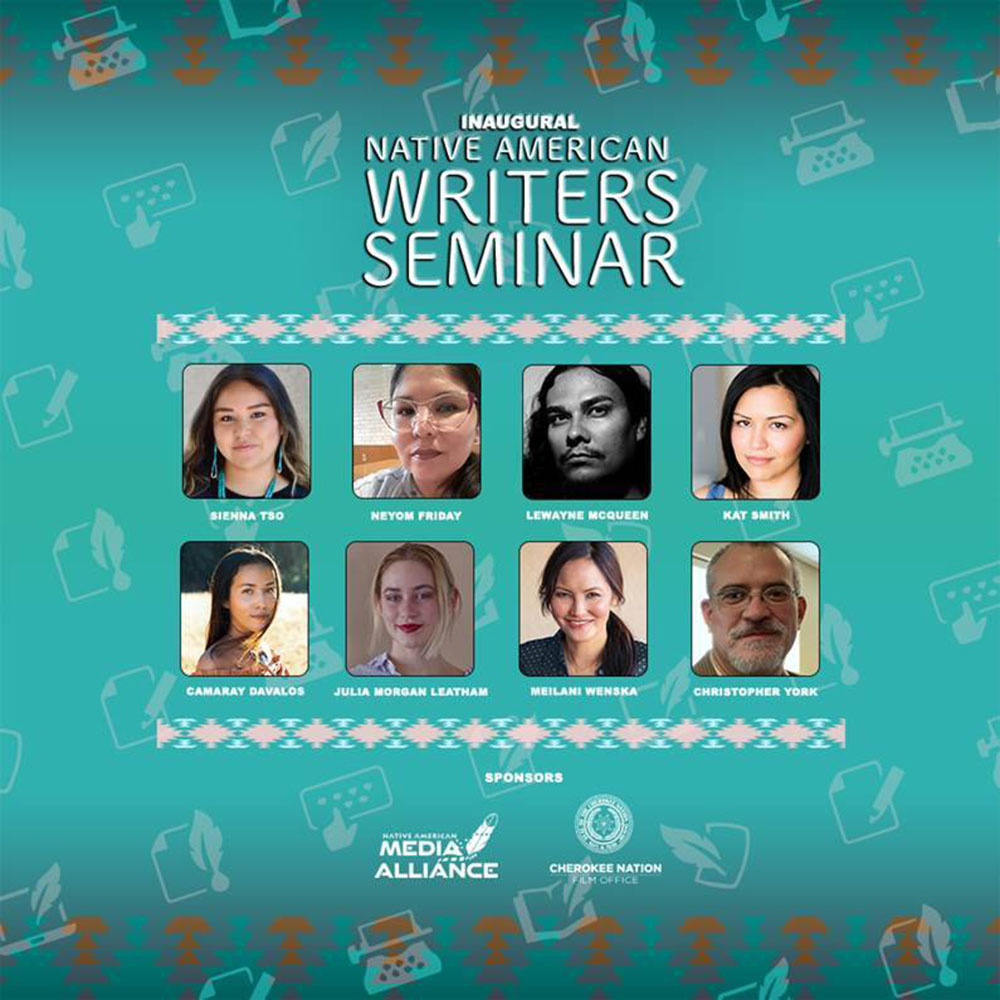 Sienna Tso (Navajo), a writer and actress who has worked as a production assistant on films and TV shows such as Marvel’s Venom II, A24/Apple TV’s The Sky Is Everywhere, and HBO’s Insecure, and recently wrote her first television pilot.

Camaray Davalos (Payómkawichum/Xicana), who wrote and filmed her first short, Woman Who Blooms at Night, in 2021. Davalos has also covered Indigenous social and environmental issues and the complexities of gender roles and identity.

Neyom Friday (Cheyenne & Arapaho Tribes of Oklahoma), a writer who draws upon her youth when she attended several tribal and federally operated Native American boarding schools throughout Oklahoma.

Julia Morgan Leatham (Cherokee Nation of Oklahoma), whose written poetry and visual artwork can be found in the zine Ethel (Summer 2021/Winter 2021) and is out now in The Threepenny Review (Summer 2021), and is also in postproduction on her short film crooked light.

Lewayne “Buddy” McQueen (Ely Shosone Tribe), who was part of the award-winning Alibi the Show in Las Vegas and made it to the semifinals of the Four Directions talent search.

Kat Smith (Eagle Clan of the Tsimshian Tribe), an actress who received a bachelor’s degree in theater under the study of Dr. Terry Converse.

Christopher York (Choctaw/Chickasaw), a writer, teacher and artist who has taught at East Central University as an adjunct English professor since 2016.

The Native American Media Alliance (NAMA) advocates for Native American representation in the entertainment industry. This initiative functions as a resource for industry personnel to work with Native Americans who have an authentic voice for film, television and new media. NAMA is a project of the Barcid Foundation, a nonprofit organization that focuses on multimedia programming in Indigenous communities.

The mission of the Cherokee Nation Film Office is to increase the presence of Native Americans at every level of the film and television industries while creating opportunities for economic development and jobs in the Cherokee Nation.