He loved it so much that the founder and CEO of indie distributor Neon tried to work out a deal with the owner of the Bong Joon Ho movie — streaming behemoth Netflix — to partner on it and let his company put it in theaters. They could even keep all the credit, explained Quinn on Sunday night while speaking on a panel at the Sundance Film Festival presented by The Hollywood Reporter and the National Association of Theatre Owners.

“I spent six months pleading with the heads of Netflix,” explained Quinn. “I don’t want to see (Okja) at home. I want to show it to my daughter in a theater.” He said they thought about it but eventually passed. “The end result is that they didn’t see it the way it was intended to be seen,” Quinn continued. “There is no cultural currency that comes with that film.”

The film, he believes, could’ve figured more prominently in this year’s awards race had it been seen in theaters. Awards and marketing to ticket prices and day-and-date releases were just some of the subjects covered during the panel, which was titled “Made for Each Other” and designed to center around the future of theatrical releases and independent film. It’s a topic that has dominated talk at festivals for quite some time, as filmmakers and distributors try to match the product with consumers’ viewing habits despite the rise in streaming services such as Netflix and Amazon. 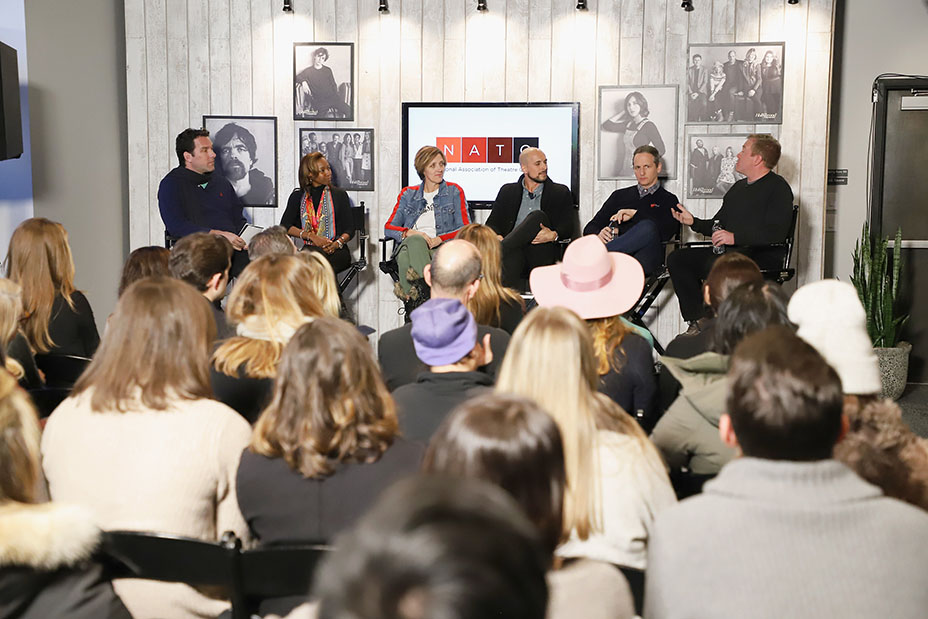 Belloni kicked off the event by announcing that the panelists represented “experts on all sides of the equation” from sellers and buyers to producers and insiders who are in the middle of these discussions “all day and every day.” He then asked Copland to explain how she weighs distribution options with WME clients.

“You start by saying that every model available is mature and very different from the next,” she said. Copland explained that there are a lot of visionary young artist auteurs breaking on to the scene who understand what audiences want. They are “really super smart about distribution,” and so it becomes a “case by case” basis with each deal.

“Everything is coming down to marketing and that’s what we are talking about now more than ever,” she said, before joking about the sheer number of distribution options that exists in today’s market place. “This water bottle could be trying to acquire a movie from me next year at Sundance.”

Plastic aside, Belloni then asked the panel to explain what they have learned about distribution from audiences.

“It’s a big country,” Quinn said. “What I do in New York, in Brooklyn, is different from my aunt in Charlotte, North Carolina.” He then detailed Neon’s strategy for its current hit, I, Tonya, saying that the theatrical release benefited from “tremendous word of mouth” and “subsequent layers of publicity” to heard towards a run of multiple months.

Denson-Randolph said they learn from audiences by checking how films play in certain areas. “We think of our theaters as communal touch points,” she said. “We cater to those communities. … Certain films can get noticed by certain communities. You have to look at each one differently.”

Berger then offered some of the challenges he and his La La Land team faced in packaging the film. “Every contour of that movie was challenging,” he said. “Everything about it was a headwind.” And that included discussions on how the film would be released.

“The theatrical experience is very healthy but you have to be targeted and smart about it,” he said.

Belloni then asked Hanson what the hierarchy is when he looks at the landscape of film distribution. “How do you evaluate choices?” he asked.

“It depends on the film itself and the risk you are taking,” Hanson answered. For some, a wide release makes sense, for others a Netflix day-and-date solution works, too, and for others a partner to share equity risk is the right answer.

Belloni then asked the panelists for their take on whether the movie star system is dead and what impact that has on how films are distributed. Copland said that “we see tremendous reliance on talent to cut through the clutter regardless of platform.”

Also what matters? Story authenticity. “If you’re not satisfied in some way, no one is sharing that with their friends and it wont find a way to break through,” she continued. Also, distributors are taking a closer look at other variables to make their films cut through, such as picking dates to make sure that the coast is clear from “every angle” with other competition such as TV premieres.

“Conversations are eight hours longer because there are 8,000 more factors to come to bear,” she said.

Berger then said that there is a conversation that has yet to die and that is the one in which people say that cinema is dead and theaters are dead. Not true, he said, and he’s willing to wager that the moviegoing experience will continue through the rest of his lifetime and beyond.

“The biggest headline is that quality matters,” he said, before adding that it’s important for movie marketers to keep the experience alive by being honest about what the product is. “Educate people on what the movie is, and not lie about what movie isn’t. Tell people. Be bold in marketing and let people find their way.”

More people are finding their way to the new Movie Pass, and Belloni asked panelists for their take on the new moviegoing experience. Denson-Randolph said it’s known that AMC’s CEO “isn’t a great fan,” but that “everyone can play in the sandbox.”

Quinn said, “Anything that encourages moviegoing, I’m all for it.” Just like he was for Okja.

Held at THR Studio at 692 Main St. on Sunday night, the panel was followed by a private reception for panelists and guests.