Back in the early 2000s, long after Frank Miller had had his fill working in Hollywood post-Robocop 2 and 3, Robert Rodriguez concocted a foolproof plan to convince Miller to relinquish the film rights to Sin City, his hardboiled neo-noir comic book series: take its every defining characteristic and adapt them as literally as possible into cinema. Enter digital backlots. Enter digital cameras and green screens. Enter selective colorization splashing across Miller’s predominantly black-and-white landscape.

Even after 14 years of technological advances in filmmaking, the ultimate product Rodriguez’s beseechment to Miller remains impressive, if not necessarily as a movie, then as a brazen replication of its source material. The differences between Sin City the comic and Sin City the film, not to mention its sequel, 2014’s Sin City: A Dame to Kill For, boil down to the greatest difference, the difference in medium; it’s obvious, but watching the films as companions to the books, it’s also true. Rodriguez keeps the “stuff” of Miller’s work intact, faithful to a fault. Sin City so doggedly mirrors its progenitor property that other than the digital wizardry required to transplant the texture of the comics from page to screen, there’s little separating one from the other.

This week, Netflix begins streaming Jonas Akerlund’s Polar, a full goose bozo neo-noir movie adapted from the Dark Horse comic of the same name, authored by cartoonist and writer Víctor Santos. On a comics level, Polar shares DNA with Sin City: Santos goes with the same black-and-white presentation, occasionally interrupting his design with a sudden pop or burst of orange. But he takes Miller’s stark tone several steps further, eschewing dialogue of any kind, rendering the narrative silent. That choice has the effect of raising tension to unbearable decibels. It’s an experience to savor. You’ll wish, in short order, for someone, anyone, to say something, anything, to shatter the quiet, even with little more than a one-liner, but Santos doesn’t oblige. The hush prevails.

If you haven’t read the comic, you can get a taste below:

It’s natural to assume Akerlund’s adaptation would simply recreate Santos’ artistry on celluloid, just as Rodriguez did for Sin City: black and white and orange all over. That’s what filmmakers do with material as deliberately stylized as Polar. But Akerlund’s Polar and Santos’ Polar look like distant cousins rather than twins; not content with mimicry, Akerlund claims Polar’s narrative for the action genre’s hitman niche, and more specifically the John Wick niche, a movie that exists within an over-the-top pocket world that revolves around assassin culture. There’s a strict code of conduct, an assassin hierarchy and apparently a high-fashion standard, because every single character looks like they’ve wandered into the frame from a Fashion for Men or Elle shoot. 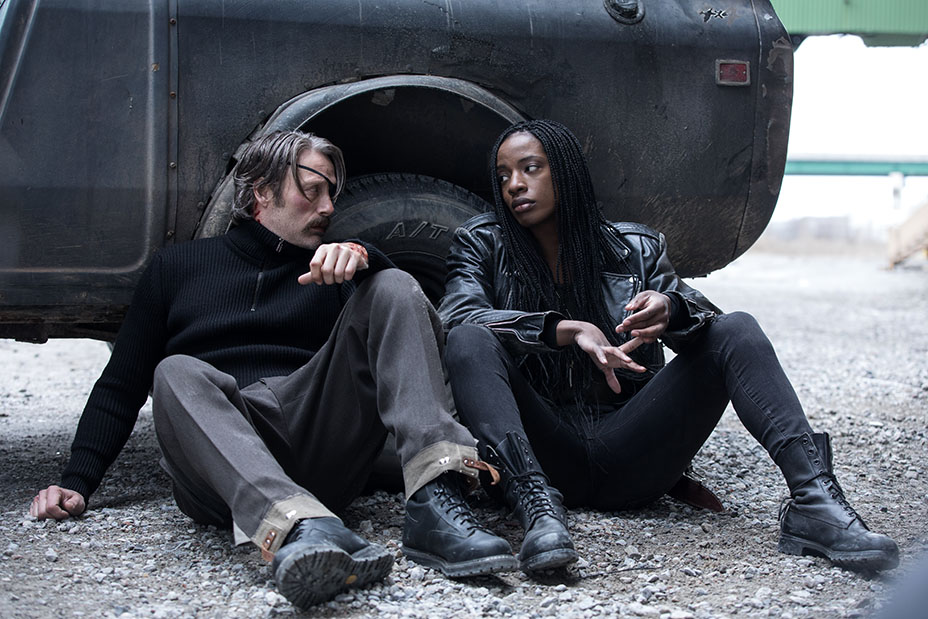 Why the hard break from Santos’ original style? Maybe Akerlund didn’t have the funds to get it done, or maybe, crazy as it sounds, he wanted to do his own thing with Polar. Whether the former or the latter, the change is welcome; Netflix’s Polar isn’t Santos’ Polar, which lets the film stand on its own and also preserves Santos’ vision by keeping it separate from Åkerlund’s. If anything, the family resemblance between Polar and John Wick, and to a lesser extent Smokin’ Aces with a little Leon thrown in for good measure, actively clangs against it more so than Åkerlund’s decision to forgo Santos’ style. Comparisons to John Wick, a la “John Wick with Mads Mikkelsen,” help word of mouth, but they also set up expectations on the high side of unreasonable.

“Don’t write checks you can’t cash,” goes the abridged idiom. Put simply, Polar ain’t John Wick, but it’s still a pretty smart alteration on Santos’ comic blended around Mikkelsen’s immense but understated leading-man presence. Marrying the basic conceit of Polar with the basic conceit of John Wick gives Åkerlund the freedom to pick and choose how, and when, to deploy the elements of the former versus the latter, which in turn lets their union calcify into work that’s uniquely Åkerlund’s.

It helps that Mikkelsen is one of the best actors out there today, and that he’s remarkably well-suited to play Polar’s protagonist, Duncan Vizla, a reticent retired assassin known as the Black Kaiser. From dramas like Thomas Vinterberg’s The Hunt, neo-Westerns like Kristian Levring’s The Salvation, and even big-hearted, off-kilter weirdness like Anders Thomas Jensen’s Men & Chicken, Mikkelsen’s filmography is littered with bits and pieces of the particularities and peculiarities that make up Polar’s personality. When the movie needs gravity, Mikkelsen summons forth solemnity; when the movie calls for gleeful violence, he kicks enough ass to give Keanu Reeves competition; when the movie calls for wry comedy, he can do that, too, glib and casual-like. As always, he’s a treat. Any Mikkelsen, as a rule, is good Mikkelsen. Polar is good Mikkelsen.

But it’s also an object lesson in how, for better and for worse, comic book adaptations function, and style’s role in shaping comic books on paper and in theaters. In the case of Polar, rejecting one aesthetic opens the film up to comparisons to another aesthetic, and so trades away one problem for a new problem. Akerlund finds solutions, ways around the challenge, but the challenge is ultimately self-imposed. Granted, there’s a challenge inherent in attempting to pull a Rodriguez and put Polar the comic onto television sets. There’s also inescapable tension in determining how best to adapt Polar in the first place. It’s to Akerlund’s credit that he, and the film, manage to find the middle ground between knockoff and lifeless reproduction.

Mads Mikkelsen Faces Other Side of Torture After 'Casino Royale'