As with a number of horror franchises, the Halloween series has taken various twists and turns since John Carpenter’s 1978 original introduced audiences to Laurie Strode and Michael Myers. Now, after seven sequels to that first film and a 2007 reboot from Rob Zombie that had its own sequel, director David Gordon Green and co-writer Danny McBride bring it back to the Laurie/Michael dynamic with the simply-titled Halloween.

This new installment takes an approach that’s common in the last decade, effectively ignoring not just the reboot but all the sequels to the first movie as well. Forty years after the events of that film, Laurie (Jamie Lee Curtis) has been preparing for the day Myers returns. That day finally comes when the killer escapes from prison and returns to threaten Laurie and her family on, coincidentally, Halloween night.

The new reboot is powered by a marketing campaign that has embraced the title’s legacy without falling too deeply into nostalgia.

All we see on the teaser poster is Myers’ mask, looking down as it it’s forlorn. It’s cracked and chipped and has clearly seen better days, a nice way to acknowledge the passage of time.

Michael Myers looms over the camera on the first poster, a bit of promotional artwork released at San Diego Comic-Con. There’s nothing else there, this is simply meant to communicate that the villain is back and counts on that being enough to get fans excited.

The theatrical one-sheet once more uses Myers’ mask, but this time it looms in the background while we see Laurie looking determined in the foreground.

Someone is reopening the story of what Michael did 40 years ago as June’s first trailer (21.8 million views on YouTube) begins, including visiting him in prison and showing him the mask he wore while committing those crimes. That’s suitably creepy, but the attention then shifts to the family of Laurie Strode, which is still dealing with her paranoia over those events. She’s spent the years preparing in case he ever returns, which he does after the prison bus he and other inmates are on crashes. Of course that happens right at Halloween, meaning it’s time for him to return to his murderous ways and for Laurie to see if she truly can protect her family.

The second trailer (7.2 million views on YouTube) from just last month starts with Myers out and about on Halloween night, quickly getting back to his old habits. Laurie is explaining that she’s been preparing for this to happen ever since the first time. He’s not going to go out without racking up a fresh body count, though, as we see him wreaking havoc on those around and helping her. 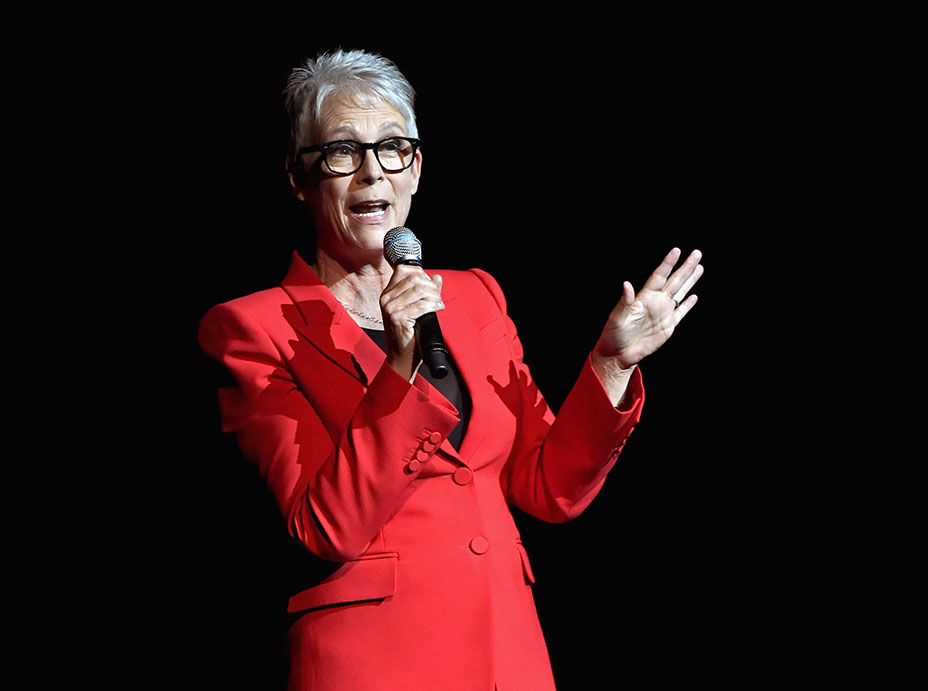 In April, Curtis showed up onstage during Universal’s CinemaCon presentation to talk about returning to the character after so many years and what audiences might expect. The movie was also part of the later CineEurope presentation from the studio.

TV, online and social ads used a mix of short videos and elements from the key art to drive traffic to the movie’s official website where people could buy tickets and find out more.

As mentioned, Blumhouse brought the cast and crew as well as footage and promotional poster both to San Diego Comic-Con in July and New York Comic-Con earlier this month.

It was announced in mid-August the movie would screen at the Toronto Film Festival as a “Midnight Madness” selection and later as one of those appearing at Fantastic Fest. A Beyond Fest screening was also announced.

Promotions for the new movie were among the material included in a new podcast series from Bill Simmons that explored the making and history of the first Halloween.

The movie’s score wound up coming up fairly frequently because Carpenter was involved in composing it. That was the subject of a featurette released by Universal in the last couple weeks before the movie came out.

The weekend before the movie hit theaters, Pasadena, Calif. hosted the Halloween 40 fan convention. While not an official event from the studio, it was well-timed to mark not only the anniversary of the original film but also promote the new one, with cast and crew from the new movie as well as all those that had come before in attendance for panels and autograph sessions.

It’s notable that for as big a presence as Curtis was on the promotional circuit, she isn’t as prominent in the poster campaign. For that part of the marketing, it was obviously decided the stronger audience appeal was to use the cracked, damaged mask Michael Myers sports to communicate the brand message.

Blumhouse has made a name for itself in the horror fandom community in the last several years and this is a big swing for the production house, resetting continuity to only include what fans are really looking for as they seek to bring the series back to basics. That’s included putting Curtis front and center to talk about how she — and the character she plays — have evolved and grown in the four decades since the original.

If it can turn out those fans and attract a new generation who have come to see the studio as a source of quality terrors, it could succeed in breathing new life into a franchise with huge brand awareness.