Something quite incredible happened at D23.

Some 13 years after the original Incredibles hit theaters, director Brad Bird revealed new details for The Incredibles 2, the long-awaited sequel to the 2004 film that introduced the superfamily made up of husband and wife Mr. Incredible (Craig T. Nelson) and Elastigirl (Holly Hunter) and their children, Violet (Sarah Vowell), Dashiell (Spencer Fox) and baby Jack Jack.

Bird revealed that Elastigirl, not Mr. Incredible, will be the star of this film, as she will be off adventuring and her husband will be home with the baby. And this time around, Huck Milner will be voicing Dash. Samuel L. Jackson is back as Frozone, and Bird is reprising his role as Edna Mode.

Bird also showed off the first footage of the film to the eager crowd. The first clip (a work in progress), showed Jack Jack as he wanders outdoors after his dad falls asleep. There, he shows off his newfound superpowers as he gets into a confrontation with a raccoon. His trick? He can multiply.

“It’s fundamentally a story about family,” Bird said, adding that the latest technology is allowing them to enhance the animation. “The technology has gotten so much better; we can get them close to what we wanted to do in the [original]. It’s like driving a better car.”

He also showed new animation tests of the family, as well as concept art that revealed that the Incredibles have a new house — and it’s a super lair. The downside? It’s “made up of sharp corners, which is not ideal for a baby.” Luckily, Jack Jack is pretty tough.

Nicole Paradis Grindle and John Walker are producing Incredibles 2, which is set for release on June 15, 2018. Check out some new concept art below.

Next up was Toy Story 4, and the panel revealed Josh Cooley has been upped to full director (he previously had been announced as co-director with John Lasseter, who will remain on as a producer). Toy Story 4 opens June 21, 2019.

Pixar also unveiled a new project from Monsters University director Dan Scanlon. The project had no title, but Scanlon, who was onstage in the main exposition wing that housed upward of 7,000 rapt fans, said it was a very personal story for him, as it’s based on him not knowing his father, who passed away when he was 1 year old. One day, he heard a recording of his late father saying two words: “Hi, bye.”

The film will be a mix of fantasy and the mundane, a world where unicorns will be so prevalent that they are the rodents in that world.

Next, Pixar unveiled new footage from the Nov. 22 release Coco, its Day of the Dead-themed film directed by Lee Unkrich (Toy Story 3) and produced by Darla Anderson.

Unkrich, Anderson and co-director and writer Adrian Molina were on hand to preview the clip. They said that the film’s music will include the talents of songwriter Germaine Franco and Frozen‘s Robert Lopez and Kristen Anderson-Lopez. Michael Giacchino (Up) is composing the score.

The presentation ended with an elaborate musical number from Coco, with Gonzalez and Bratt participating.

The team also shared a new photo from Coco (see below). 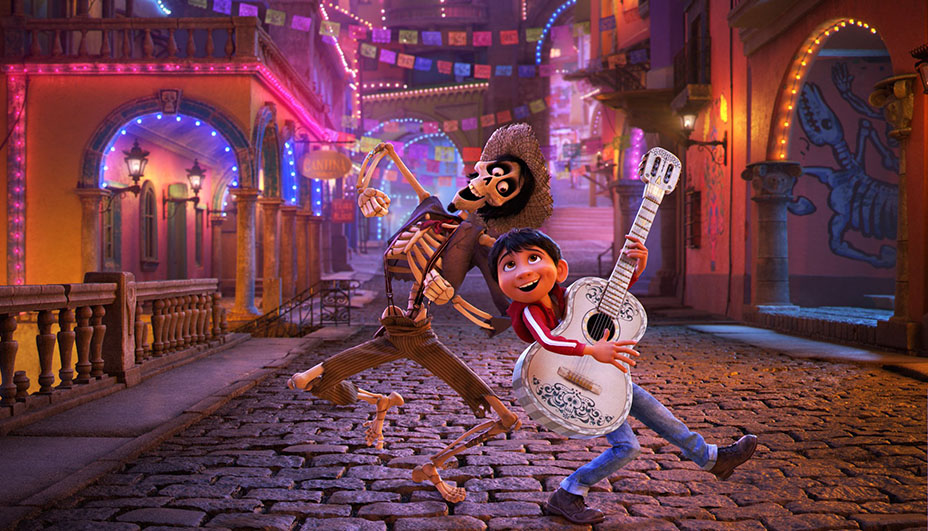 Stay tuned to Heat Vision for more from D23.