Over the past 12 months, Hollywood’s posture toward China has gone from desperate embrace to awkward wariness and hand-wringing. After several years of fervid courtship were followed by a succession of megadeal disappointments in 2017, many in the U.S. entertainment industry now seem to wish they simply could wash their hands of the whole China quandary altogether. “I’ve sensed that this is a very real feeling that has grown over the last few months,” says Jonah Greenberg, president of motion pictures at CAA China.

On some level, Hollywood’s hot-and-cold attitude toward the Middle Kingdom is easy to understand — it closely tracks one of the key underlying economic realities. Chinese capital flow into the U.S. entertainment industry exploded from $1.13 billion in 2015 to $4.78 billion last year; but it has plunged 90 percent in 2017, totaling just $489 million as of Sept. 30.

Still, industry leaders closest to the Chinese market caution that not only is the temptation to disengage misguided — for what globally minded entertainment concern can afford to spurn the world’s soon-to-be-biggest market? — but the gloomy prognostication about the boom cycle’s early demise also has obscured the subtle and ultimately more important signs that the two industries have been evolving toward a more sustainable and mutually beneficial footing. “I can understand some of the fatigue, but it’s a much bigger and more exciting opportunity than what [the skeptics] are looking at,” says Greenberg. “The way we see things, this has only been the beginning.”

And yet, the landscape couldn’t have looked more different a year ago, when China was a major presence in Tinseltown and anyone with a bold-faced name and a little international savvy was set to get rich. At the time, every major studio, save Disney, had a Chinese financier or joint-venture relationship in place — or else was scurrying to secure one. And China’s then-richest man, Wang Jianlin, was swooping into Los Angeles aboard his Gulfstream 550 to boast about plans to inject billions into the slates of all six major U.S. studios. All they had to do was take his money — and it was easy to believe him: He had paid $3.5 billion for Legendary Entertainment in a January 2016 deal that came shortly after fellow conglomerate Fosun bankrolled Jeff Robinov’s Studio 8 and Jack Ma’s Alibaba Group injected millions into Steven Spielberg’s Amblin Entertainment.

But then the unthinkable happened: Beijing regulators turned off the tap, ordering state banks to stop financing the conglomerates’ overseas buying sprees and labeling the entertainment sector an officially restricted industry for outbound investment. The big-ticket Hollywood deals were quick to fall: Wanda’s $1 billion purchase of Dick Clark Productions, Huahua Media’s $1 billion investment at Paramount, $345 million for Voltage Pictures, Avi Lerner’s $100 million sale of Millennium to China’s Recon Group — all of them dead. This sent Hollywood’s moneymen and moneywomen into the paroxysm of hand-wringing that has yet to fully subside.

But if you ask the Chinese industry’s top film executives what they make of the clampdown and its aftermath, most will contend that the regulators did both sides a favor — and they aren’t just toeing the political line. “In general, we had gone backward regarding how we cooperate,” says James Wang, CEO of Huayi Brothers Entertainment. “The recent activity gave Hollywood the misunderstanding that China has only two things to contribute: money and the market.”

Drunk on the allure of China’s fast and easy cash, the thinking goes, Hollywood studios and prominent independents had grown distracted by dreams of fast exits at high multiples or generously structured slate financing deals — neither of which were ultimately sustainable. “The current restrictions have caused some companies to drop out, but I don’t think that’s a bad thing for the cooperation between China and Hollywood because those left in the market will be people who want to cooperate on producing good films rather than money speculators,” adds Wang.

So while the studios struggle to adapt to China’s new regulatory environment, other players are beginning to put forward promising solutions to the challenge of how the two culturally distinct industries can come together to produce commercially successful content. “In the past, many tried to co-produce a film that can work in all markets, but it is very difficult to bridge Chinese and Western cultures,” says Song Ge, chairman of Beijing Culture Media, currently one of the hottest studios in Beijing. “Now we are taking a more targeted approach and thinking more strategically about how we collaborate.”

Action star Wu Jing’s smash hit Wolf Warrior 2, which Song’s Beijing Culture co-produced, could be the box-office phenomenon that launches the new model. The film blends a story of emphatically Chinese patriotic appeal — the tagline: “Whoever attacks China will be killed no matter how far the target is” — with a level of action-flick proficiency previously unseen.

Hollywood and China: How to Push a Deal to Actually Close

The Hollywood dazzle came courtesy of Marvel mainstays Joe and Anthony Russo (the duo is at work on the next Avengers film), who consulted on the project via a deal with Beijing Culture.

“The American team helped Wu Jing make a stronger film,” says Song. This proved to be a winning formula: Although it did limited business overseas, Wolf Warrior 2 grossed $854 million in China alone, the second-biggest single-market gross ever behind only J.J. Abrams’ Star Wars: The Force Awakens ($936.7 million in North America). Song says this type of project-specific, piecemeal collaboration will be a feature of the Chinese film industry going forward — the company recently hired Oscar-winning producer Barrie M. Osborne (The Lord of the Rings) and a U.S. stunt team to consult on its forthcoming fantasy epic The Creation of Gods.

Even the official co-production model — which many producers had soured on after the spectacular disappointment of Legendary Entertainment’s The Great Wall — received encouraging proof of concept this year. STX Films’ gritty Jackie Chan action-thriller The Foreigner, a U.K.-China co-production made with Chan’s SparkleRoll Media, cost $35 million to produce. It earned $81 million in China, $34 million in North America and had a worldwide total of $135 million.

“This wasn’t about trying to push a project through the system to get favorable terms,” says Noah Fogelson, executive vp corporate strategy at STX Entertainment (official co-productions are entitled to a 45 percent share of box-office revenue in China compared with the 25 percent cut that imported titles receive). “It was about using the model in the way that it was intended, to create an international film that would be well received and profitable in both markets — to show that this can be done.”

Meanwhile, China’s overall box office has bounced back from 2016, when growth plummeted to 3.7 percent after a 48 percent expansion the previous year. This year, total ticket revenue is projected to hit $8.2 billion, with the market soaring past North America to become the largest in the world by at least 2020.

Given the enormous upside of breakout Chinese films — Never Say Die, a slickly produced comedy, earned $334 million in October on an estimated budget of around $30 million — many insiders have come to conclude that the Hollywood majors are missing a huge opportunity by failing to pursue the local-language space with greater urgency.

“I think it’s probably arrogance,” says Endeavor partner Alexis Garcia. “What the studios have often done is stick somebody from the main company there and try to do things the same way they are done at headquarters — that’s been the failure in becoming really productive.”

How China Consumes Movies: Breaking Down the Data

Most of the major studios have had local-language development teams in China for years, but their output has been halting at best. Disney, which has been in the market for decades, signed a co-production agreement with the state-owned Shanghai Media Group back in early 2014. But only one fictional film has emerged from the partnership, romantic comedy The Dreaming Man, which will be released on Dec. 8. Warner Bros. has been the most active, releasing four local titles so far via its Chinese joint venture studio Flagship Entertainment. But the company’s CEO, Warner Bros. veteran Richard Fox, retired in May after just a year and half in the role. Universal and Paramount, meanwhile, have yet to release a single Chinese-language film.

“It was historically easy for them to say “We should be doing this,” but when it came to actually managing [Chinese development and production], it required entirely different processes and thinking,” adds Garcia. “You would then see them either do nothing — which is the case with a bunch of them — or they would take some shots here and there, but not strategically and not nearly enough.”

Perhaps sensing the opportunity, the U.S. mega-agencies are investing. WME-IMG China, Endeavor’s Beijing-based joint venture, partnered in June with Village Roadshow and China’s Perfect World to launch Perfect Village, which Garcia describes as evidence of the company’s “strong desire and drive to be in the local content space.” Perfect Village is at work on a slate of Chinese-language projects, including the Chan-starring sci-fi thriller Bleeding Steel and the Zhang Yimou-helmed martial arts period film Shadow.

“You know that myth about how the human brain only uses 7 percent of its actual processing power? It’s a good analogy for the Chinese box office,” notes CAA’s Greenberg, whose Beijing office has begun taking equity positions in Chinese projects in addition to packaging them. “If the robust growth we see right now is being generated by many average-quality Chinese films and U.S. imports that are entirely in English, movies like Wolf Warrior 2 show us what the market can deliver when the audience is given what it really wants.”

Ultimately, M&A activity will have an important role to play in the two industries’ ongoing integration; and the most connected industry leaders in Beijing believe some big cross-border investments are still possible — but next time around, the approach will have to be about more than quick cash injections.

“It wasn’t normal — it was like a fever,” says Li Ruigang, chairman of China Media Capital, the venture capital fund that executed China’s only successful major Hollywood investment this year, buying a minority stake in CAA and co-establishing the Beijing joint venture CAA China (Li also assumed a seat on the Los Angeles agency’s board).

“The government was concerned that people were doing big overseas investments funded by heavy debt in the domestic market, which could create the potential for a financial crisis,” Li explains. “However, if you try to do a long-term, solid investment, which will eventually upgrade the local sector, the government is still positive and will support you.”

“There has to be long-term operational strategy and commitment,” he adds. “This is what will create value and build the industry of tomorrow.” 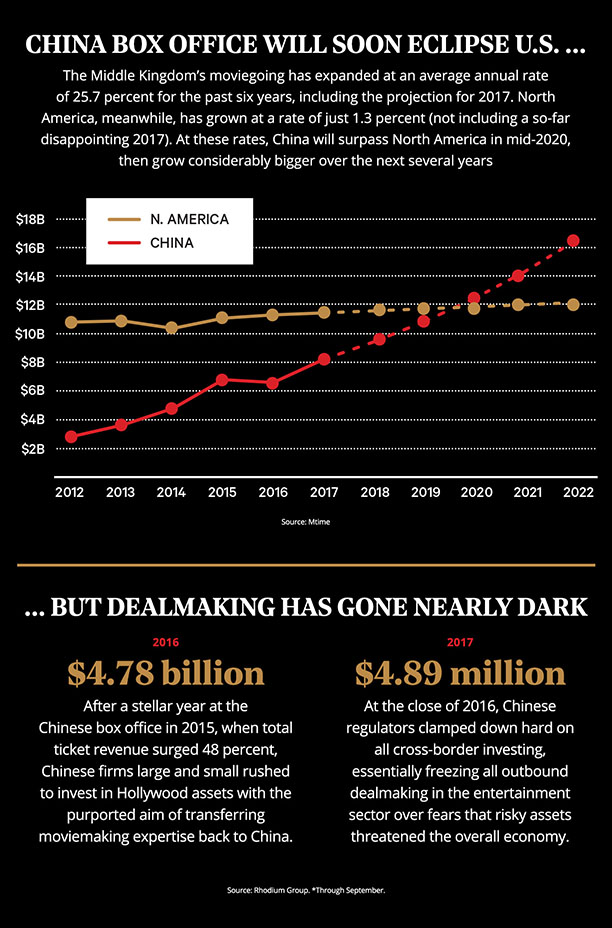