“Beware that his shadow doth not burden your dreams with horrible fears.” For nearly as long as we’ve been making movies, we’ve been using them to explore our darkest fears and desires, to drain the imitations of life from actors so that willing audiences may feed on those experiences. It should come as no surprise then that the vampire is one of cinema’s most utilized beings, with the character Dracula being the second-most frequently appearing character onscreen (Sherlock Holmes is the first). Death and mystery make likely bedfellows and it undoubtedly says something about humanity that these two characters are returned to again and again. With this being the Halloween season, we’ll turn away from the detective for now and focus on the devil, Dracula, who transfixed the world when he first appeared in Bram Stoker’s 1897 novel and again 25 years later in F.W. Murnau’s unauthorized adaptation, Nosferatu: A Symphony of Horror.

The first Dracula film pre-dated Nosferatu by a year. The Hungarian film, Dracula’s Death (1921) marked the first onscreen appearance of Count Dracula, though it did not follow the plot of Stoker’s novel. Instead, Karoly Lajthay’s film focuses on the visions of a woman in an insane asylum who meets a fellow inmate, Count Dracula, who may be real or just another nightmare. Murnau’s Nosferatu (1922) is the first adaptation of Stoker’s novel, though when refused permission by Stoker’s estate to make the film, the names of characters were changed. Count Dracula became Count Orlock (Max Schreck), Jonathan Harker became Thomas Hutter (Gustav von Wangenheim), Mina Harker became Ellen Hutter (Greta Schröder), Renfield became Knock (Alexander Granach) and Abraham Van Helsing became Professor Bulwer (John Gottowt).

Despite the changes made to the names, Nosferatu is a mostly accurate, though truncated, adaptation of Stoker’s novel, with the notable exception being that Butler/Van Helsing plays much less of a role in defeating the vampire than Ellen/Mina does. But it wasn’t simply the accuracy to the novel that made Nosferatu so noteworthy. 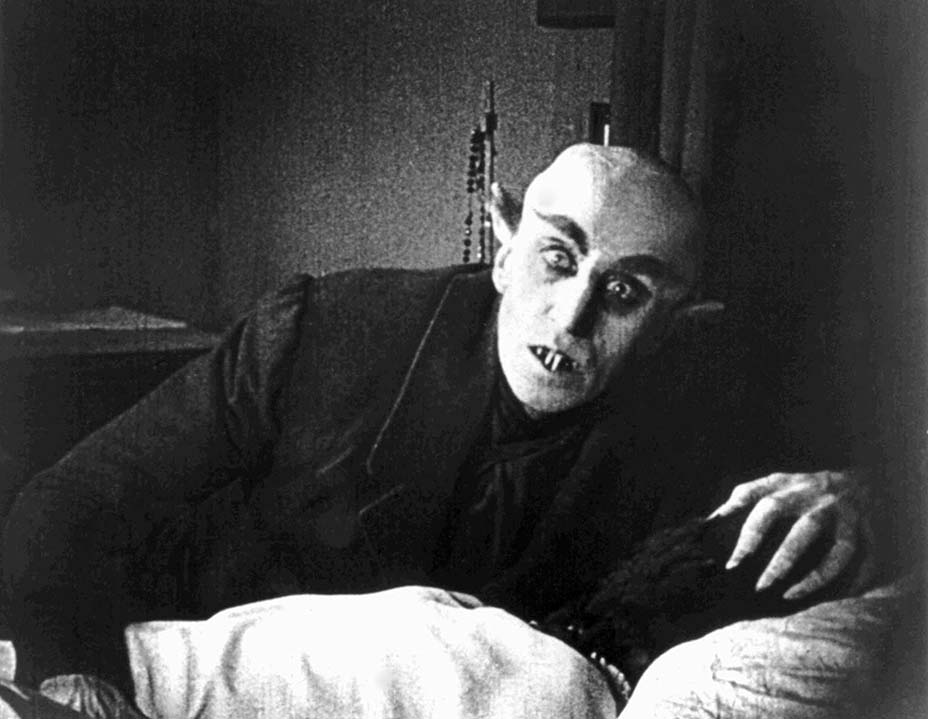 Murnau’s film stands as one of the defining examples of German Expressionism with its employment of strange architecture, such as the ruins of Orlock’s castle, heavy use of shadow and its preference for emotional, perspective-driven reality rather than grounded objective reality. There’s a stillness to Murnau’s film, making it distinct to other silent films of the era from Britain and the U.S. Nearly every frame is punctuated by an overwhelming sense of mood and foreboding that sometimes works against Hans Erdmann’s score in eerie fashion, allowing the film’s horror, like Nosferatu’s presence, to sneak up on the unsuspecting. But what was most impactful about the film was the presentation of the vampire himself. Although Bela Lugosi would popularize Dracula in Universal’s 1931 film as a refined sex figure, Max Schreck and art director Abel Grau brought out the monstrous nature of the vampire with Orlock’s rat-like teeth and obscenely long fingernails. Schreck’s vampire is hunched and drawn into himself, pantomiming a hunger bordering on starvation. His portrayal was so convincing that during the time of the film’s release and afterwards, rumors circulated that Schreck — who was little known and of which little information about his life was public — was a pseudonym for another actor, or perhaps even a vampire himself. This latter theory, as implausible as it seems, suggests the unreality circling the film. This urban legend was later used as the concept for  E. Elias Merhige’s Oscar-nominated Shadow of the Vampire (2000), which starred John Malkovich as Murnau and Willem Dafoe as Count Orlock under the guise of Max Schreck. Schreck’s surreal ability to convey inhumanity, an otherness through his form, is comparable to modern performers Doug Jones, Javier Botet and Troy James, who use their own bodies as the canvases through which to create monsters. 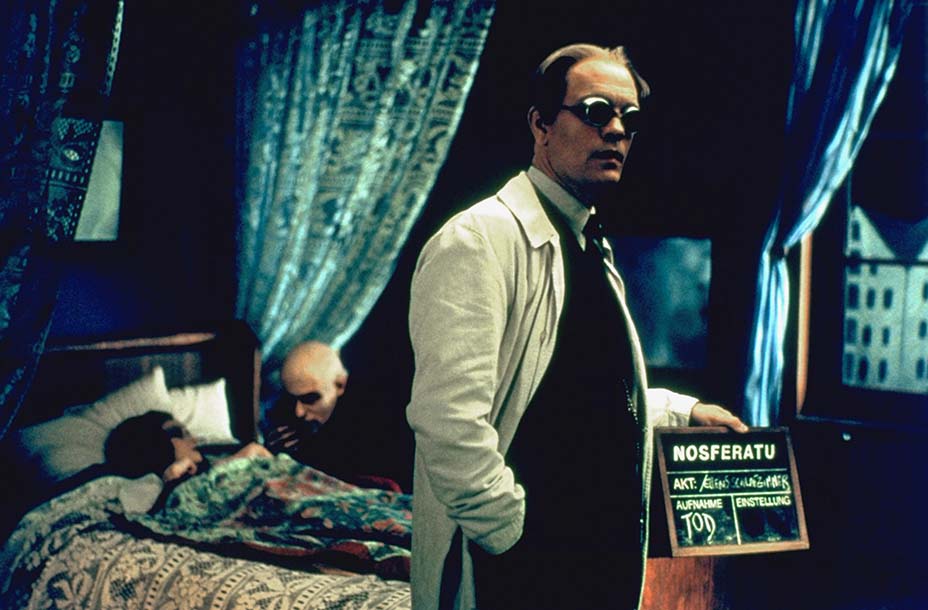 Nosferatu‘s powerful ability to conjure up nightmares that bled out of the film and into our real world, shaping urban legends and the very foundation of the horror film genre, is a testament to its legacy. There is scarcely a horror film that exists that doesn’t seem impacted by Nosferatu in some way. There are the obvious ones like the elder vampires in Tobe Hooper’s Salem’s Lot (1979) and Jemaine Clement and Taika Waititi’s What We Do in the Shadows (2014) who share an unmistakable resemblance to Count Orlock. But there are also the more subtle connections like Ellen’s role as a proto final girl, destroying Count Orlock when the expectation and pre-existing material of the novel suggest it will be Hutton and Bulwer who save the day.

The wide, unblinking eyes and stiff, stilted movements of Red (Lupita Nyong’o) in Jordan Peele’s Us (2019) also recall Schreck’s performance. And then there are the presences of figures in the darkness, and texts taken as fiction and later given credibility that make audiences question the reality of what they’re seeing, the mental state of the characters, and ultimately create an emotional dread that may be far harder to move past than a jump scare. These are horror elements used in countless films but were recently employed to great effect in Ari Aster’s Hereditary (2018) and Midsommar (2019).

In a 1997 publication of The Great Movies, Roger Ebert had this to say of Nosferatu, “Here is the story of Dracula before it was buried alive in clichés, jokes, TV skits, cartoons and more than 30 other films. The film is in awe of its material. It seems to really believe in vampires … It doesn’t scare us, but it haunts us.” It wasn’t just audience members who were haunted by Nosferatu, but also filmmakers like Alfred Hitchcock, Tim Burton, Alex Proyas and Werner Herzog, who remade Nosferatu as Nosferatu the Vampyre in 1979. Like Murnau, Herzog approached the material with awe. Herzog’s film restored the character’s names to those of the original novel, though Mina and Lucy’s roles are switched. His film expands on a number of the visual and narrative themes of Muranu’s film, resulting in what is arguably the greatest adaptation of Dracula.

Klaus Kinski’s Dracula in the 1979 film comes across with a level of exhaustion and existential misery that isn’t superior to Schreck’s portrayal but offers a different lens through which to see the character, now stripped of the sexuality that had been built over the past 48 years. There’s a measure of dreamlike predestination in Herzog’s film, not simply because it is a remake, but because Nosferatu’s encounter with the Harkers is played with a kind of inevitability that supposes their respective deaths and rebirths are part of a larger story that has been happening across the endless sands of time, as suggested by the film’s final images. While Herzog is still very much operating within the realm of German Expressionism, there is a lushness to his film, at least early on, with its wide nature shots. But little by little the life is drained from the picture and the events become confined to stone structures that plague wary citizens hopelessly seclude themselves behind.

With two excellent adaptations of Dracula in the form of Nosferatu, a third might be tempting fate. But Robert Eggers, director of The Witch (2015) and The Lighthouse (2019) has in the past circled a remake of the film, in order to bring yet another perspective to the story. If there’s anyone who once again provide a means for the vampire to haunt us, it is Eggers. If it does come to fruition, then perhaps there’s an argument to be made that Nosferatu has become its own entity, distinct, or perhaps evolved from Dracula in a way that suggests the character still remains dangerous, and not entirely knowable. Whether we get the next Nosferatu film from Eggers are another up and coming horror filmmaker, his presence is certain and unavoidable. Regardless of how synonymous the figure is with Dracula, his return under that name, Nosferatu, sets a different expectation than any other vampire film, one that scratches at the boundary between reality and surrealism.