Despite two overtly timely lines spoken by Sandra Bullock’s character, Ocean’s 8 is not a “message film.”

That sentiment was made clear by the cast and screenwriters when the all-star crew descended upon Lincoln Center’s Alice Tully Hall for the Warner Bros. film’s New York premiere earlier this week.

“It’s not a message film — it’s a fun film,” star Cate Blanchett tells The Hollywood Reporter. “You’re watching this bunch of women pull off an insane and impossible heist. That’s always thrilling when people you are rooting for do something impossible, which is a bit apposite from what’s going on in the world with women at the moment: Women encouraging other women to reach big, to dig deep.”

She then added for clarity: “But it’s a tentpole film, so we don’t get too deep.”

Ocean’s 8, a spinoff to Steven Soderbergh’s Ocean’s trilogy that starred George Clooney and Brad Pitt, sees Bullock leading an all-female crew on a con that proves she and brother Danny Ocean (Clooney) are truly thick as thieves. Shortly after being let out of prison on parole, she assembles a team that includes her former partner and co-mastermind Lou (Blanchett), fashion designer Rose (Helena Bonham Carter), hacker Nine Ball (Rihanna), fence Tammy (Sarah Paulson), jeweler Amita (Mindy Kaling) and pickpocket Constance (Awkwafina) for a job. The con? Swiping a $150 million-dollar Cartier necklace off the neck of Hollywood star Daphne Kluger (Anne Hathaway) during the annual and exclusive Met Gala event.

The “dream team” ensemble is what drew Blanchett to the film. When Soderbergh told her that his friend Gary Ross — who directed and co-wrote the movie along with Olivia Milch — had an idea to put Bullock in the center of an Ocean’s film, Blanchett recalls saying, “Well, if you can get those women, I am totally in.” She now adds, “And, they got them.”

When speaking to THR at the premiere, the cast described the on-set energy as playful, relaxed and at times as “hysteria” — depending on how many of the actresses were in the room. A common favorite were the group scenes filmed in the Brooklyn loft that served as home base for the crew (pictured, below). “If you think about it, to each actor there were three people to check them before they turned over the camera — hair, makeup and costume,” Carter says, going behind-the-scenes. “That’s 28 people and suddenly, it’s like a cocktail party.” 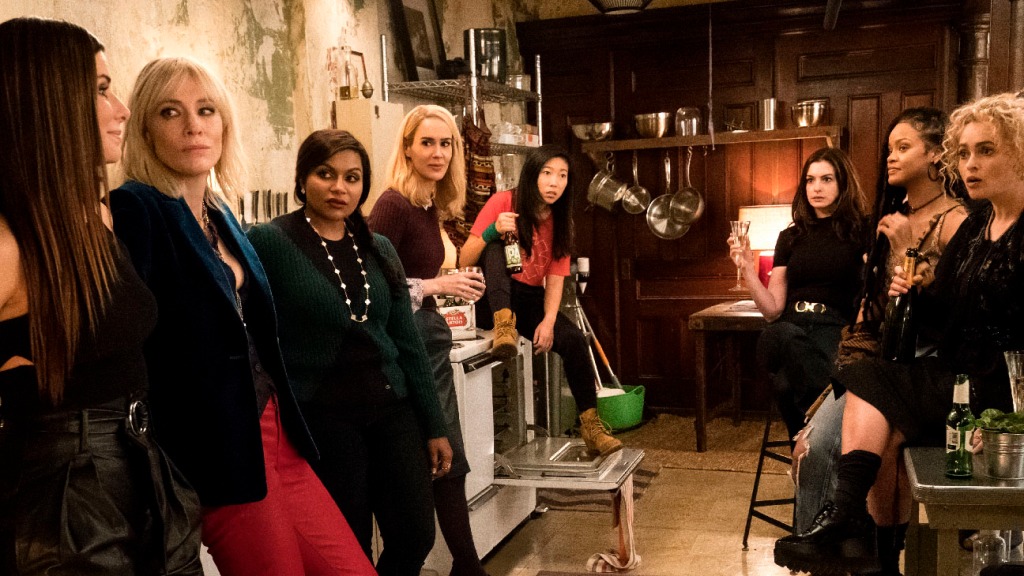 What stood out entirely was the sheer number of women on the callsheet. “I was on set with Cate Blanchett and Sandy Bullock and Mindy Kaling and Awkwafina and Rihanna and Helena Bonham Carter and Annie Hathaway — what did you do today?” Paulson says. “I’ve never been in a movie with this many women. You’re lucky if you have one female co-star who has any scenes with you. So to be with eight powerful women who are so extraordinary, it’s very special and very rare.”

Paulson, who filmed three movies this year around her American Horror Story and upcoming TV roles, says it would also be “extraordinary if this became part of the norm and then we didn’t even have to qualify it by gender.”

As widely evidenced by the backlash that surrounded 2016’s Ghostbusters reboot, female-starring films and gender-swapping remakes come under a higher level of scrutiny at the box office. While Awkwafina doesn’t anticpate Ocean’s 8 will reform any trolls, she and Paulson both agree that the movie proves that society, and Hollywood, are moving in the right direction.

“I don’t think this movie will help to end small-mindedness. Small-minded people will always be small-minded,” says Awkwafina, who will also be starring in Crazy Rich Asians this summer. “I want people to watch the movie and then form the opinion. [But] whether you like it or not, there’s more to come. Hollywood has been making a direction right now. These are the stories that we need and these are the stories that need to be told, so it’s going to be happen.”

In addition to plucking an all-female crew, Ross and his casting department chose characters that represent a diverse set of not only skills, but also backgrounds and NYC boroughs. James Corden, who arrives later in the film as an insurance fraud detective, hopes the eclectic cast influences more projects to come.

“This film should be judged alongside any other movie,” says the host of CBS’ The Late Late Show. “The sooner that we embrace that the world we live in is one we want to be of equality, and it absolutely shouldn’t matter your gender, your sexuality, your color of skin, religion, country — none of those things should matter. What should matter is: Here’s a great story that has an incredible cast of actors.”

As for the future of the franchise, Awkwafina says there are ideas being bandied about within the cast. The cast’s all-around interest in reprising their characters is high if there were to be a sequel, with Paulson being the most optimistic. “They got three. We should get at least another one,” she says of the Ocean’s trilogy.

But Blanchett is looking to the moviegoers: “When the guys did the initial one, I don’t think they were planning to make the others. You have to see how it lands with an audience and take it from there. I hope they have as much fun watching it as we did making it, because you don’t want to jump the gun.”

Box-office estimates say Ocean’s 8 will have no trouble toppling holdover Solo: A Star Wars Story to win the weekend. Warner Bros. has high hopes for the spinoff, which is debuting a decade after the studio made box-office history when Sex and the City galvanized female moviegoers.

Ocean’s 8 brings with it plenty of glamour and glitz, as it orbits around the recreation of the biggest fashion event of the year, the Met Gala. To film the event in Manhattan’s Metropolitan Museum of Art, the cast — and its rotating door of celebrity cameos, from Kim Kardashian and Katie Holmes to Anna Wintour herself — filmed at night for two weeks. But playing the one fictitious ego-centric Hollywood star in the bunch was even more fun for Hathaway than donning the con’s sparkly target, or her Valentino gown and cape (both were on display at the premiere afterparty, fittingly held at The Met).

“I’m always hyper-aware of how not to be a you-know-what,” says Hathaway, crediting her Philadelphia upbringing for keeping her grounded — and insisting her self-absorbed actress is not based on anyone in particular. “So to actually let it go and to lean into all the ridiculous fame nonsense that I’ve been trying to side-step for all of these years just felt really, really fun. It just felt great and to play someone who had such an enormous ego and someone who takes herself so seriously, and is so insufferable, came very naturally to me.”

Indeed, director-screenwriter Ross hopes people walk out of the film saying, “I want to steal some stuff!” (Though he clarifies that he doesn’t actually encourage any real-life thievery.) Milch echoes her partner, summing up her hope for what moviegoers should leave thinking to THR: “I want to go get a group of friends and make something happen in the world.”

What the Stars of 'Ocean's 8' Wore to the Premiere

Ocean’s 8 is now in theaters. Watch the videos below to see what else the cast — including Elliot Gould, who reprises his Ocean’s character Reuben Tishkoff — had to say at the premiere. 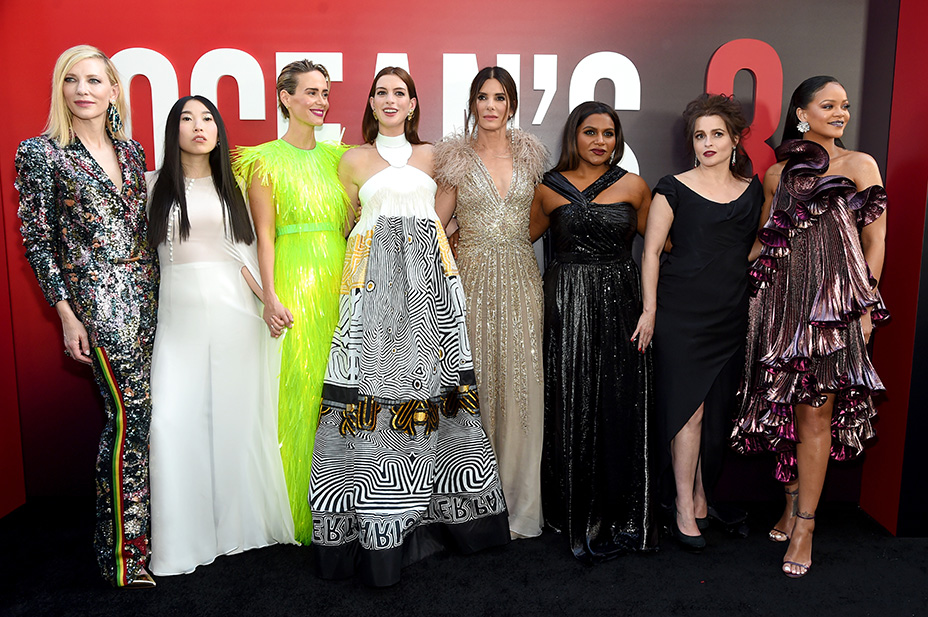