For Riverdale producer and writer Roberto Aguirre-Sacasa, having anything to do with Archie Comics — let alone creating multiple storylines with LGBTQ characters — is a dream come true.

After receiving a cease-and-desist letter from the company for writing a play about Archie in which he was a gay man, Aguirre-Sacasa said he took the opportunity to tell them how much he wanted to write for them.

“I said, ‘Hey, you have to understand, I love these characters,'” Aguirre-Sacasa said. “‘And this is a love letter to them. And it’s my dream to work for Archie Comics and write Archie comic books. And I want to make an Archie Broadway musical, and I want to make a TV show.’ Could I ever have imagined it? Absolutely not.”

Just over a decade later, the writer joined Riverdale actress Madelaine Petsch on stage at the GLSEN Respect Awards to accept the Gamechanger Award on behalf of the show for its LGBTQ storylines.

“I remember when the Cheryl coming-out storyline was coming up and how important it was to all of us to make sure it was as authentic as possible, and that it really brought this person to life,” Petsch, whose character, Cheryl Blossom, comes out in season two, told The Hollywood Reporter. “To be able to bring, I think, one of the few female-female relationships on screen right now is really incredible.”

According to Aguirre-Sacasa, Petsch was the driving force behind the decision to make Cheryl gay.

“Before we writers ever thought that Cheryl might be gay, I remember that [Madelaine] called me out of the blue one day and said, ‘I think Cheryl should start dating someone, and I think it would be really great if she started dating a girl. I think that would mean a lot to a lot of people,'” he remembered on stage while accepting the award.

“Thank you for making that call,” he told the actress. 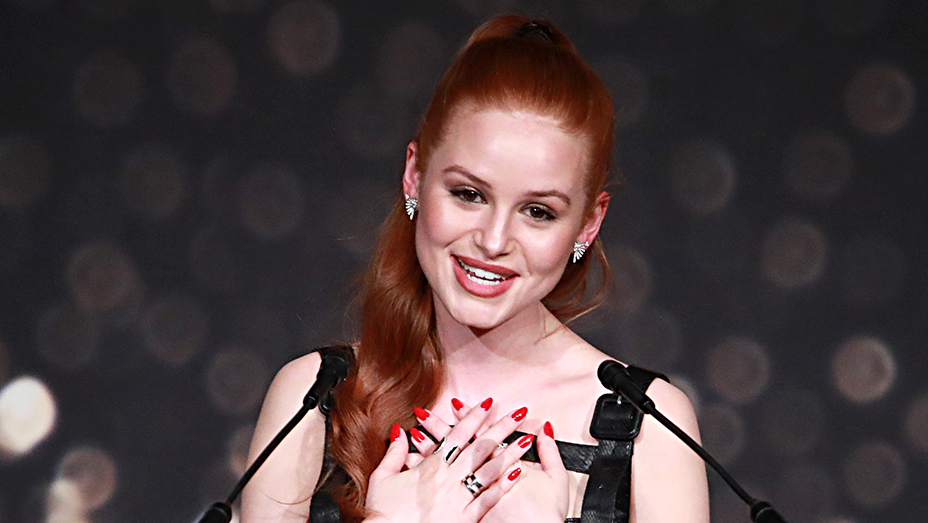 Spencer, who received the Inspiration Award, said that having growing up in Montgomery, Alabama, she understands feeling overlooked in school and wants to make sure that no other children feel that way.

“School should be a place where you can be yourself, make friends, and learn about the world,” she told the audience while accepting her award. “Where you shouldn’t have to worry that the bathroom you use or who you take to prom will somehow get you bullied, or that you’ll never see yourself in the books you’re reading or the history you’re learning.”

The night’s celebration drew other celebrity guests, including Jonathan Bennett, Judith Light, Connor Franta and Glen Powell. The lively room was full of encouraging cheers as members of GLSEN’s national student council told stories about how the organization has impacted their lives.