Swinton, echoing her heart-stamped Schiaparelli smock and heels from the Netflix film’s Cannes premiere, stressed to The Hollywood Reporter that though the Bong Joon-ho comedy centers on a girl who aims to save her six-ton pet pig from becoming a corporate food product, its direct intention isn’t to transform viewers into vegetarians.

“Absolutely not — it’s about being conscious and awake while we’re here on the planet, keeping our eyes open and not sleepwalking through life,” the actress explained. However, if that were to happen, “I would feel for the meat industry. Let’s see!”

Like their director, the pic’s castmembers found themselves craving less meat throughout production, though it was repeatedly served on the set. Ahn Seo Hyun completely lost her appetite during the slaughterhouse scenes, and has eaten less pork products since wrapping the shoot.

“I don’t think I was as conscious of an eater before,” said Devon Bostick, who plays a member of an animal rights rebel group alongside Dano, Collins and Yeun. “Though I’m not a full vegetarian, I’m much more aware of my intake and how big that footprint is.”

Producers Jeremy Kleiner, Dede Gardner, Christina Oh and Dooho Choi joined fellow producer Pitt and director Bong at the premiere, which was introduced by Netflix film chief Scott Stuber. A special thanks was made to Okja’s late location manager Kat Donahue, whose family was in attendance.

Zoe Kazan, Denis O’Hare, John Cameron Mitchell, Noah Baumbach, Greta Gerwig, Finn Wittrock, TJ Miller, Julie Taymor and Donna Karan were among those at the screening, which was followed by a party at the Top of the Standard. Unlike the Cannes bash, which uncomfortably greeted moviegoers with prosciutto, the New York event was specifically free of burgers, bacon and ham, and instead served lobster rolls, salmon tartare, king crab bites and various veggie-filled offerings, paired with champagne and a soju-based “Seoul Sister” cocktail.

Okja, which also stars Jake Gyllenhaal, is set to bow in limited theaters and on Netflix on June 28. 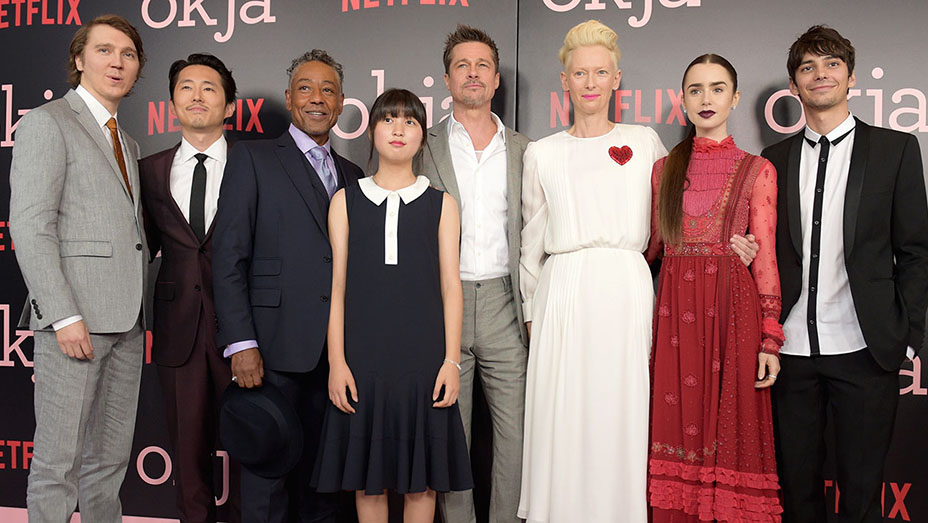