You first met during a workshop of the Lost in Translation script, yes?

SOFIA COPPOLA Oh my God. It’s hard to imagine. I don’t even know when Lost in Translation came out, but it was a long time ago.

Were you able to build much of a rapport back then?

COPPOLA Rashida and some other actors were doing an acting workshop where they would improv scenes out. I don’t know how much of it was actually written at that point. It helped me see the scenes start to come together and was really helpful in finishing the script. And my favorite thing, if Rashida remembers, I had someone babysitting my phone in case Bill Murray called …

JONES All day, like for all of our rehearsals, there was just somebody sitting outside reading a book, waiting for Bill to call.

COPPOLA I’m so glad you remember that, because I blocked it all out — the trauma of hunting down Bill.

It can’t be that traumatic, since you’ve collaborated multiple times since. All three of you worked on A Very Murray Christmas together. Obviously, there are parallels in On the Rocks — seeing Rashida and Bill in the Carlyle. Was that a point of inspiration?

COPPOLA That was the first time I saw Bill and Rashida together, and I thought they had such a cute rapport — a chemistry. When I was working on On the Rocks, I thought of that duo. It helped me a lot to have them in mind. And then I reached out to Rashida. But definitely seeing them together, I thought, “Oh, I would love to do something with the two of them.”

So much of the pleasure of watching this movie now is that it’s this romp through a New York that we all used to know. Did you have a favorite filming location?

JONES I loved that house on Long Island, it was so beautiful. There were miniature ponies and dogs, but there were so many great locations in the city, too.

COPPOLA I felt like we ate and drank our way through New York.

JONES We did. I wrote a list down of every single meal that we ate during production. Coppola We should make a little guide.

I’m so glad that we matched each other’s enthusiasm for that. It was fun to be at all these old places that we have gone to over the years, like Rao’s and Indochine. All these real classic places, they just have an energy about them. It’s so different from trying to re-create that on a stage. 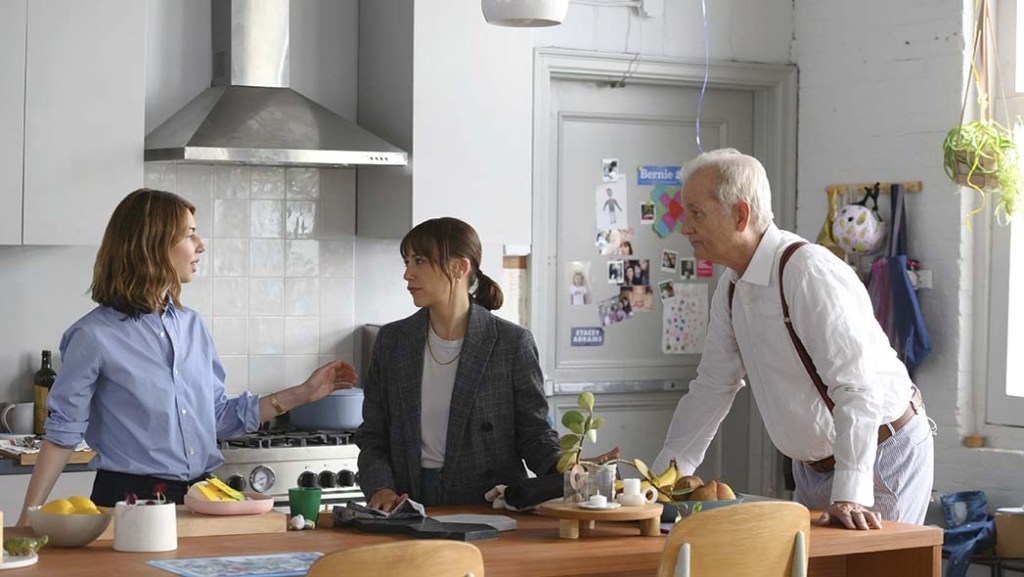 Alcohol is the silent co-star here.

JONES Or not. On the Rocks. Pretty loud. (Laughs.)

COPPOLA We weren’t really drinking when we were filming. (Laughs.) We had a lot to do. I love the Thin Man movies. They just sit around and drink martini after martini and ponder life and solve mysteries. So it was an homage to that.

Obviously, Bill is a big presence, but it is very much a vehicle for Rashida. What was the conversation like between the two of you about you agreeing to star, and can you describe the collaboration that you found along the way?

COPPOLA Rashida had to really carry the whole film, and I’m glad you were up for it. I respect you as a writer, so I could send you the script and get feedback. You were always there to help along the way and jump in there with Bill and help me figure it out.

JONES In very Sofia fashion, we kept in touch while she was writing the script. She called and said, “I was thinking about you for this part,” which is a dream phone call for anybody to get. I was like, “Yes, yes, 100 percent. I’m in, whatever you need. But I am secretly very, very pregnant right now, so can we do it after that? (Laughs.) It might not work for this character, for me to be this size. But that gave us some time to talk about the script and read through it with Bill. Obviously, the final product is Sofia’s baby. But she was incredibly generous and let us participate in crafting our characters and their dynamic.

The film moves along at a rather gentle, intimate pace — the exception being that car chase. Can you speak a little about filming it?

COPPOLA I like to call that my action sequence. It’s funny, because my brother Roman came in to help with that — and I was saying, “Roman’s coming for the action scene!” He was like, “It’s … a car chase sequence.”

JONES For us, it was action.

COPPOLA For me, you don’t stick with one mood. I wanted it to have that energy and hecticness. But I have never worked with so many car rigs and stunt drivers. Bill was driving a lot himself. And Rashida was in the car with Bill driving, which I think was very brave.

JONES Bill fancies himself an amateur stunt driver. So he wanted to do as much of the driving as anybody would let him. And to be honest, he is a very good driver … but it was not comfortable. There was one time where he zoomed off and you guys couldn’t find him.

COPPOLA Out of the filming zone! The cops were yelling.

JONES We got lights flashed on us, but I don’t know if we got pulled over. It’s Bill, he got away with it.

Speaking of cops, the scene where Bill’s character talks himself out of a ticket carries a different weight in light of the year we’ve had. Did you have any second thoughts about how it would fit in the film now that so many Americans have woken up to the relationship between police and people of color?

COPPOLA We talked about it when we were shooting. It’s obviously so different now. I mean, it’s always an issue — but it’s been brought so to the forefront of our culture that I don’t think I would’ve written that scene … something comedic around such a grave, violent moment that is so in our face. Felix is the epitome of that kind of privilege, and he uses it.

JONES It has always been happening. It’s the history of this country. And I think in a way it makes it even more pointed. It is every level of privilege: older white man privilege, money privilege, charm privilege. All these things that are coming to this moment to conspire to really understand that character and also her relationship with that character. We talked about, like, “What does she say? She has to say something. You don’t have a Black family at home and see that moment happen and think, “Oh that was fun.” You think, “If my family was in this car, that would go down in a completely different way.”

You both have high-profile fathers. [Jones’ dad is record producer and Hollywood legend Quincy Jones, and Coppola’s is The Godfather auteur Francis Ford Coppola.] I’m wondering how they have received the father-daughter dynamics at play in the film?

JONES They’ve disowned us, both of them. It’s been very painful. (Laughs.) No, they loved it. My dad loved it.

COPPOLA I think they’re proud and they appreciate that father-daughter dynamics are an important topic in our lives.

JONES And they’re both like, “That character is based on … the other dad.”

This is off-topic, Rashida, but with Kenya Barris leaving his Netflix deal, do you know what’s going on with season two of #blackAF, where you play his wife?

JONES No! I wish I did. No, we’re going to do it, we’re just trying to figure out a lot of things. There’s a lot of things that need to be figured out, but I really want to do it. I miss that very morally questionable character, and I can’t wait to play her again. (Laughs.)