Sharon Tate (Margot Robbie) is watching herself on a movie theater screen, her feet resting on the seats in front of her as she takes in her performance. At first there’s a bashful hesitance in her gaze, the question of “Am I good?” residing in the corner of her eye. But then the audience reacts to her presence on film; they laugh, and she sinks into that praise, enjoying herself being enjoyed — a moment mirrored twice again later by Rick Dalton (Leonardo DiCaprio) on set, and Rick and Cliff Booth (Brad Pitt) watching his guest TV appearance on FBI. But in this moment, there’s more to Robbie’s performance than the character’s affirmation.

Robbie’s Sharon Tate is watching the actual Sharon Tate onscreen, her real performance in The Wrecking Crew (1968). It’s a tribute to the woman, not as a victim, but as an actress, a talented one on the rise. Within this meta moment of an actress playing Tate watching the real Sharon Tate resides the soul of Quentin Tarantino’s latest film. The legacy of a filmmaker, and all the jobs that entails, goes beyond the art they make and we consume. Their real legacy suggests a usefulness that lives beyond the roles they are expected to play. There’s an effervescent quality to this scene, one that permits the heart to skip a beat in elation while simultaneously feeling the pangs of sadness for the reality in which we exist, one removed from the fairy tale of Once Upon a Time in Hollywood.

There’s something different driving Tarantino’s ninth film, especially when taken in the context of his filmography. It feels as though his entire filmography, predicated on his relationship to the past and the pop culture that shaped him, has ultimately led to Once Upon a Time. Many of his signatures are still present. The deep-cut pop culture references, the dynamic soundtrack, the sharp dialogue that permits no imitators or substitutes, the narrative deviations, the flexibility of time, appearances by numerous prior collaborators and, of course, a heaping dose of ultraviolence. But Tarantino subverts them in ways that result in a film that feels like his most personal and introspective. We find closeness through absence. There’s silence when we expect a back-and-forth dialogue, noticed in the car rides Rick and Cliff share. Tarantino’s car ride scenes are usually punctuated by almost nonstop back-and-forth, but here the two characters have developed such a shorthand and comfort with each other that silence is all they need to communicate. 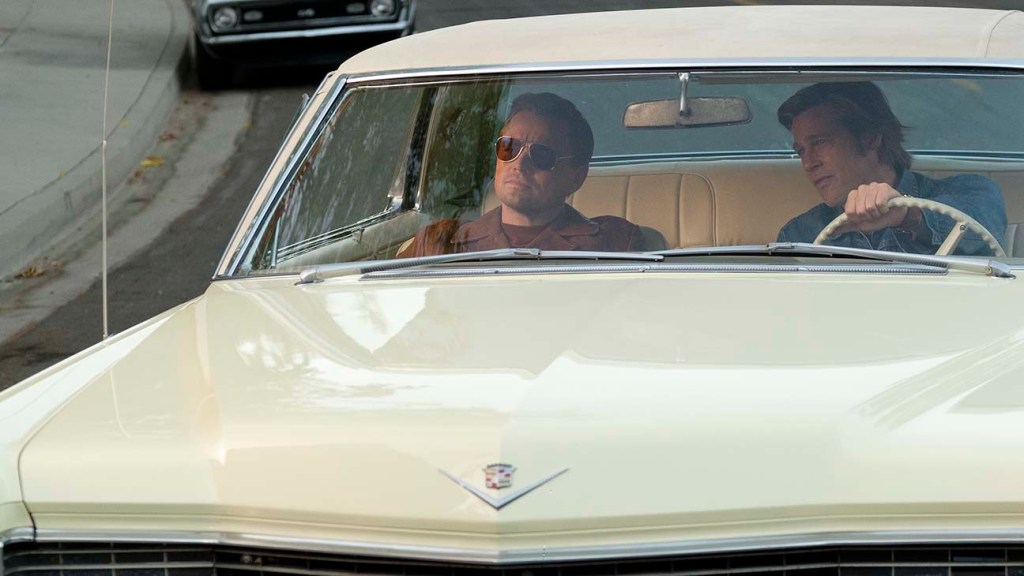 Likewise, silence becomes crucial when Cliff strolls through Spahn Ranch. Music, both diegetic and non-diegetic, drops out in order to suggest a complete lack of life within that space, except for a fuzzy black-and-white television owned by a blind man, and watched by a cult deaf to the real concerns of the outside world. Once a set for movies and television, Spahn Ranch is a pop culture black hole in the midst of a cult consumed by, and succeeding in, becoming part of pop culture. And on that continued subject of absence, there’s also no trunk shot, though a moment revolving around a tire change allows the space for one. It’s a small deviation, but also perhaps essential. There’s no moment in which a character looks down on something we can’t see, as if gazing into a reality filled with essentials we aren’t entirely privy to. Instead, the entire film takes place inside that reality, allowing us as audience members to exist within that sacred trunk space and get as close to Tarantino through his work as we’ll ever be.

It’s not that Tarantino hasn’t proven to be introspective before. Jackie Brown (1997) makes one of the strongest cases for the director’s most empathetic work, and The Hateful Eight (2015) is maybe as bold of a political statement as the filmmaker has ever made. But there is a certain level of harshness even when considering the heightened reality in which these movies take place that suggests a world in which happenstance and karma are given equal weight. Take Pulp Fiction (1994), for example, in which Vincent Vega (John Travolta), the pic’s lead, is surprisingly shot dead mid-film, not because he deserved it but because he was at the wrong place at the wrong time. Jules Winnfield (Samuel L Jackson) clings to his faith, reciting Bible passages, but it’s arguably not divine intervention that keeps him or anyone else alive — it’s chance, and it’s chaos that can’t be contained by the order of Tarantino’s chapters and verse. Yet, in Once Upon a Time, there is a divine presence, a karmic justice that finds everyone getting what they deserve. 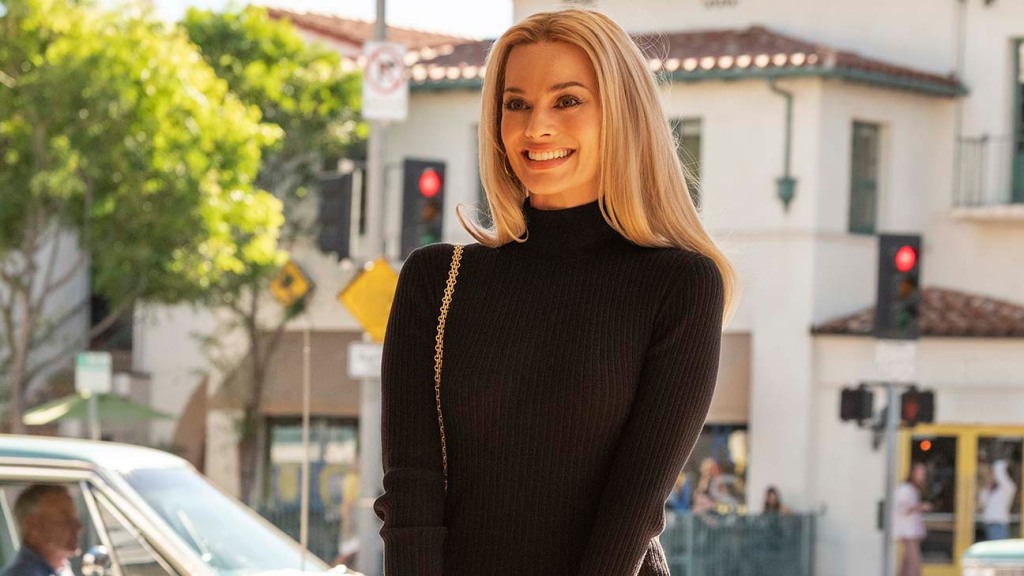 Rick Dalton and Cliff Booth’s drowning optimism concerning their careers in the rapidly changing Hollywood are kept buoyant by Tate’s brief though important appearances throughout the film as a kind of manifestation of the Hollywood dream. She’s the divine spirit within the hills, and Rick and Cliff ultimately need her as much as she needs them. The pic repeatedly goes back to the idea of usefulness. What does that mean? Dalton’s leading TV star days are over and he is resigned to playing villainous guest roles. Dalton feels his usefulness is at an end. He’s one of many, replaceable, and his hacking cough becomes equally symptomatic of the cigarettes he smokes as he suffocates from a system of expectations. Booth’s usefulness is attached to Dalton’s. A stuntman/gofer whose career, upended by age and rumors that he killed his wife, is kept alive only by his friendship with Dalton and Dalton’s ability to still get work. There’s a usefulness within their industry that drives their primary concerns and the loose plot that makes up the film. But there’s also a usefulness beyond that — an awareness that Dalton in particular has of playing a role within a Western frontier already claimed and no longer in need of cowboys of the variety he portrays. The only manifest destiny left to chase after is stardom, and with that exploited for all it’s worth, there comes the sobering reality of facing what else you have to offer the world as a person.

When we think of Tarantino, we often think of him through the lens of exploitation cinema. It’s this factor that has perhaps led some viewers to refer to Once Upon a Time as Tarantino’s least Tarantino film. Yet that is a limited window through which to view the filmmaker, and if anything, the latest Tarantino is the most Tarantino. Undoubtedly he’s heavily influenced by exploitation cinema, spaghetti Westerns, cult movies and gems so hidden that you’d be hard-pressed to find a copy unless it’s at Tarantino’s New Beverly Cinema in Los Angeles. But those who were concerned about Tarantino exploiting the atrocity of Tate’s murder by the Manson Family failed to recognize that while style and language are exploited throughout his filmography, people aren’t. They may die in awful ways, and suffer through some of the worst that life has to offer, but Tarantino’s filmography is evidence that he loves people all the way down to their smallest tics. We’re thrilled by the way he can remix familiar aspects of our pop culture past, and that we can recognize his directorial trademarks, but the question Tarantino faces as a director that seems to come through in this film is not unlike the questions facing Rick, Cliff and Sharon. Am I useful? Am I good? As Tarantino nears the end of his directorial career and his self-imposed retirement at 10 films (though maybe nine now), there’s undoubtedly a desire to leave behind something useful and a filmography defined by more than recognizable stylistic choices that also exist in the movies that influenced him. 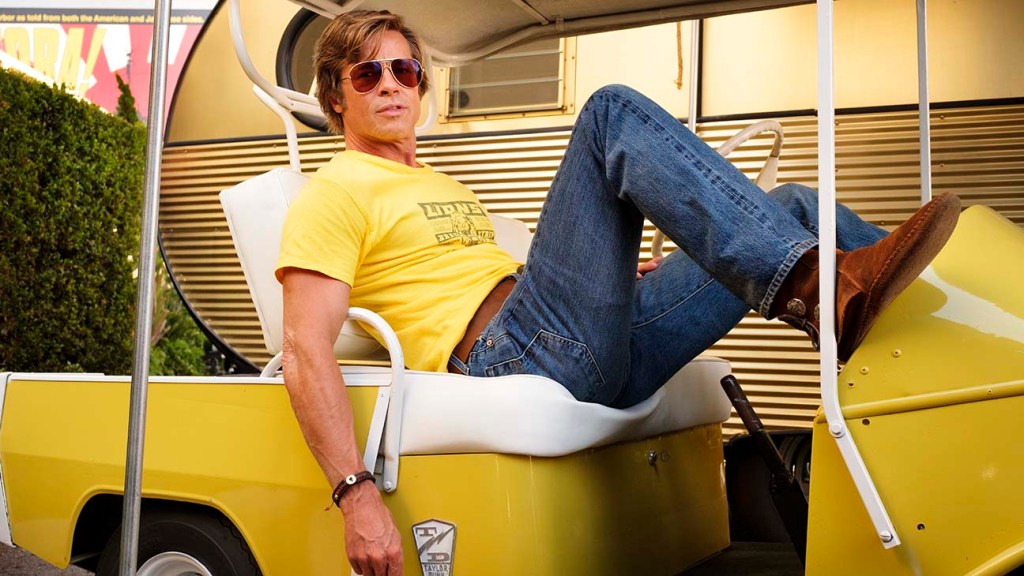 Media isn’t simply observational. It’s participatory. Our relationship with media affects our relationship with each other. And I emphasize media rather than film, because as much as Tarantino has gone to bat for film, Once Upon a Time gives equal weight to movies, television, music and books. Each one useful in creating a relationship, be it the TV series and films Rick and Cliff work on, the music that works as a siren call drawing Cliff to Pussycat (Margaret Qualley) or the book Sharon buys Roman (Rafal Zawierucha) for his birthday. And it is media that changes the world, both on a large scale, and in terms of the personal.

At the end of the movie, the course of history is changed. Rick and Cliff decide to have one last hurrah as Rick’s expenses filming spaghetti Westerns in Rome have crippled his finances. And Sadie (Mikey Madison) decides that Rick would make a better target than Sharon because his work on violent TV shows have made her and society violent. Both of these decisions result in Cliff and Rick (with a movie prop no less) killing Tex (Austin Butler), Sadie and Patricia (Madisen Beaty) and inadvertently saving Sharon and her houseguests. This isn’t the first time Tarantino has used his films to take a participatory approach to history. He did it first in Inglourious Basterds (2009), and then again in Django Unchained (2012). Like Once Upon a Time in Hollywood, each of those films ended with the evil being defeated by flames as the filmmaker literally burns away the atrocities of our past — the Holocaust, slavery, the Manson murders — the effects and aftereffects of which shaped America in the 20th century. But the historical deviation of Tarantino’s latest feels the most useful, the most lasting, perhaps because it is centered on one person.

Rick and Cliff prove their usefulness, and so does Tarantino, but none of them in the ways we expect them to. Rick and Cliff’s usefulness doesn’t come down to their deaths, though the director’s history suggested it would. Instead it’s their lives, their survival that proves the most useful, not only in saving Sharon but in becoming living examples that life still has promise and potential even when the roles they thought defined them are over. In this neo-Western, it’s not cowboys and bounty hunters who save the day, but filmmakers whose human flaws allow them not only redemption, but connection.

We’re left with Sharon asking Rick, “Is everyone OK?” and then “Are you OK?” It’s just the thing Rick needed to hear, from someone other than Cliff, an awareness of his personhood granted by someone within the circle of Hollywood’s elite, and for us someone decades of pop culture have stripped that very personhood away from. Tarantino grants it back and in the absence of strict reality, and the invitation of fantasy, there is the creation of myth. Although we can’t help but mourn the absence of the Sharon Tate who could’ve been, there is solace found in the fact that her legacy drives this work of art and is therefore irreplaceable, useful and transformative, all things that Hollywood, at its best, can be.

Universal, Fortnite Team to Reimagine Classic Monsters With 'We Will Be Monsters' (Exclusive)