Since 2016, Julia Butters had been flying relatively low on the Hollywood radar, playing Anna-Kat, the youngest daughter on the ABC sitcom American Housewife. But her quiet intensity on the show caught the attention of Quentin Tarantino, who was so impressed with Butters that he wrote a part for her in his period Tinseltown saga Once Upon a Time in Hollywood. Butters, age 10, stole scenes playing Trudi Fraser, the straight-shooting child actor who shares the screen with Leonardo DiCaprio’s Rick Dalton in a TV Western called Lancer. She talked to The Hollywood Reporter about her new cachet as muse to a director who makes movies she’s still too young to see.

I understand Quentin Tarantino discovered you by seeing you on TV.

That’s right. I was telling a scary story to other kids on American Housewife. It was called “Bloody Becky,” and it was about a witch who would come out of the mirror and grab them and eat their faces off if they didn’t give [my character] all their candy.

That sounds right up his alley. Did you audition?

I auditioned once, and then I had a callback. Then he just invited me and my mom over to his office. I was so nervous. I was thinking my heart could be broken at any moment. And he told me that he’d like me to play Trudi Fraser in his movie! I was totally in shock. I didn’t know what to say.

Had you seen his movies before?

One day you’ll be old enough. But you saw this one — you went to the premiere.

I didn’t watch all of it. I stepped out at parts when it wasn’t suitable. I watched every scene except for two — which were the hitchhiking scene and the finale. 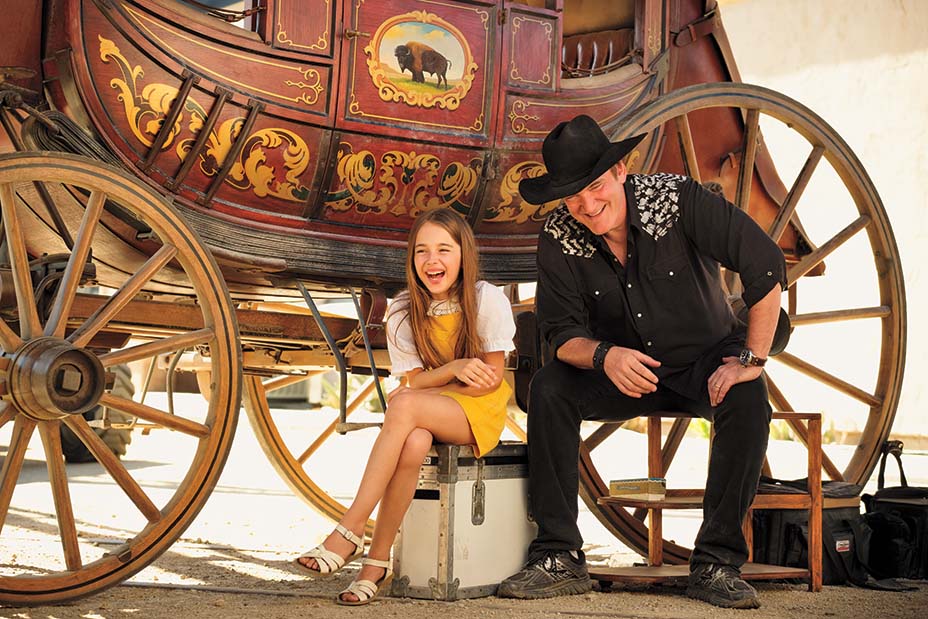 Did you know Leonardo DiCaprio would be your scene partner when you got the part?

Yes. And this is the weird way I found out: I told my math tutor that I was going up for the part, and he said, “Oh, that’s the movie with Brad Pitt and Leonardo DiCaprio!” I didn’t know who they were. As far as I was concerned, Leonardo DiCaprio was Leonardo da Vinci.

Yeah. I’m not as starstruck as most adults would be.

How did you rehearse your big scene with Leo when you meet on the set of Lancer?

Quentin actually gave me 21 pages of the audition script, which were really all of my scenes in the film. So I really knew my lines from the start. I came to the table read and was off-book.

I tried to be. Leo was even more of a pro, though. He was really quiet and invested in the reality. In between scenes, he’d invite me to come talk.

What did you discuss?

Many things. We talked about his experiences as a child actor. He told me to always be professional and focused when you’re working. He said, “You’ve clearly aced that already.”