“Honestly, it was her idea, and we’re celebrating it in an unabashed way,” said Garcia, the more Hollywood focused of the two designers, giving the Sex and the City actress due credit. “Oscar wasn’t comfortable with it, he didn’t want his name on [the Met Gala dress],” added Kim, who worked with him for more than a decade before he died in 2014. 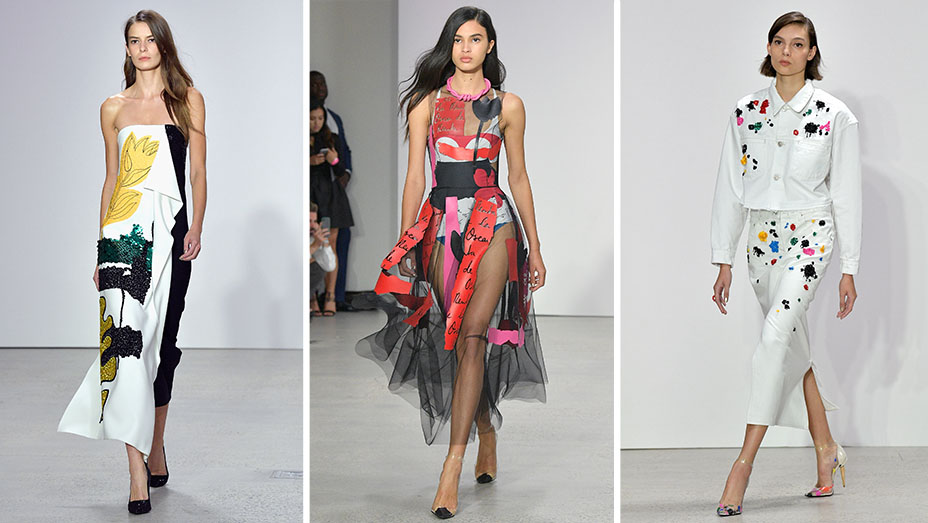 The art auction house Sotheby’s was the backdrop for the arty spring 2018 collection, which started off on a casual note, with rainbow-splatter embroidered button-down shirts and denim — yes denim, at Oscar de la Renta, whose stately, gentleman designer dressed every first lady from Jackie Kennedy to Michelle Obama.

“We’re trying to open the house to a new type of customer,” Garcia explained in between greeting runway show guests Nicki Minaj, who made a splash at the designers’ Monse show over the weekend, and Nicki and Paris Hilton. In recent days, both Rihanna and Nicole Kidman have worn designs by the ODLR, too.

Mission accomplished. This collection was a winner, balancing a desirable everyday sportiness with offbeat elegance, and just the right nod to ‘80s era logo-mania (isn’t it about time to bring back bold gold signature belts and oversized earrings?).

It was also full of the kind of clothes Hollywood will be dying to wear, not only on the red carpet (vivid dip-dye tulle gowns in every color of the paintbox; an ivory cocktail dress with “Oscar” jumbled letter sequin embroidery), but also for daytime events (brushstroke fur coats; pantsuits in electric hues with oversized blazers and cropped, full pants, worn over T-shirts emblazoned with the new script “Oscar” logo — a truer version of his signature, launched just weeks ago on Instagram).

“The logo to us no longer felt fresh, because all the signatures on the notes he left were much more illegible and true to his handwriting,” Garcia explained. “We decided to refresh it with the new fall ad campaign, so we are celebrating that. Then we started looking at all the handwritten notes people left to the house, which were always very personal,” he added, including notes from such stars as Elle Fanning and Emma Watson, thanking Oscar for dressing them on the red carpet. Those notes inspired a whole scribble motif than ran throughout the collection.

“It’s connecting back to who he was and who we remember him as. It’s like signing your canvas with your name,” Kim added. The designers even turned their creative vision to shoes, she explained, pulling off her own paint-splattered canvas pump to show off a distinctive paintbrush-shaped heel.

Here’s hoping this season was the first of many more masterpieces.