Can’t wait for Oscar’s big announcement Tuesday morning? Need to know right away who’s going to get nominated? Allow me to help, with an assist from the math.

Every year, I use a statistical model to predict the chances that each film, director and actor will receive an Academy Award nomination in the six major categories. My model uses other film awards and critics’ scores, weighting each input based on how well it has predicted Oscar nominations in the past. This has nothing to do with my personal preferences or hunches. 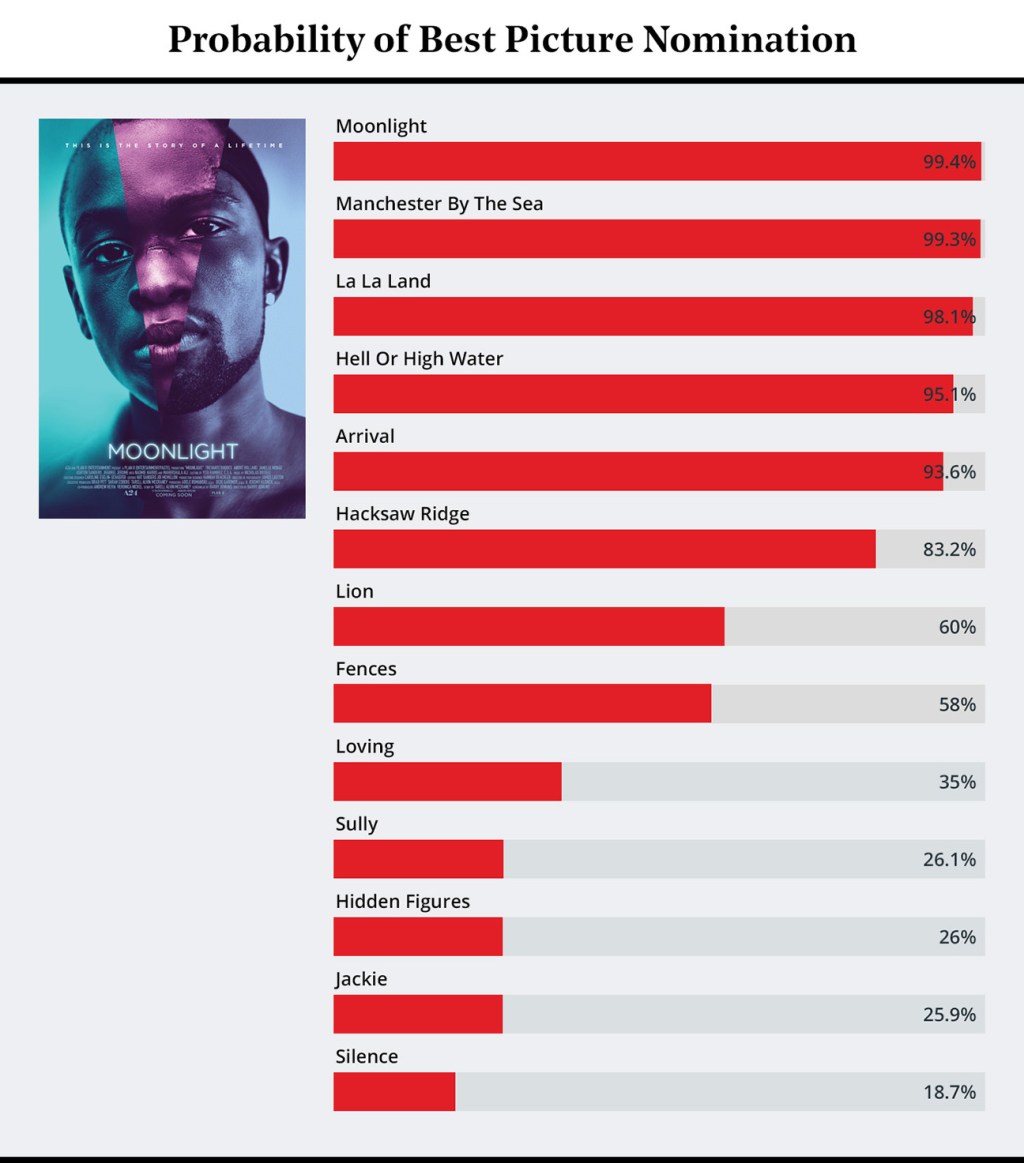 Right at the top, the big three are locks: Moonlight, Manchester by the Sea and La La Land have all done more than enough in the early awards and nominations to virtually guarantee best picture noms.

The next tier is comprised of three films with plenty of early nominations, including mentions from the American Film Institute, Producers Guild of America and American Cinema Editors, but no significant wins: Hell or High Water, Arrival and Hacksaw Ridge. None are locks, but it would be a surprise if any of these three missed out.

Tier three is Lion and Fences. Lion skyrocketed in the standings because of its Directors Guild of America nomination. After that, we have the movies praying for as large a pool of nominees as possible. If the Academy maxes out and allows the full 10, there is space for at least two of the bottom five, or perhaps even a true dark horse (Deadpool, anyone?) to sneak its way in. 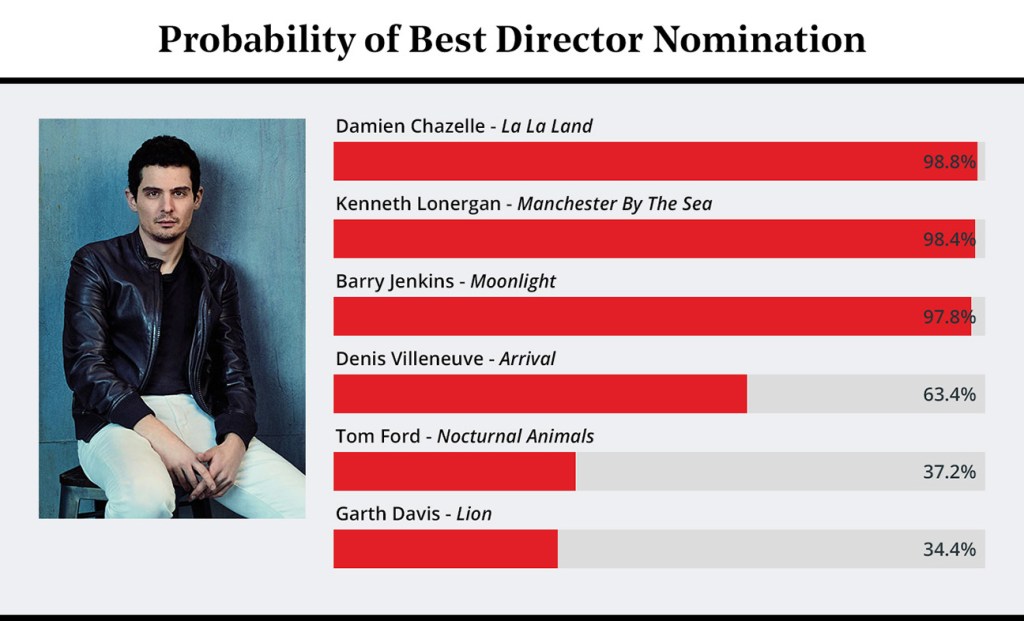 Just like for best picture, the same big three — La La Land, Manchester by the Sea and Moonlight — are sitting pretty for best director nominations. The best predictor of this category is the DGA, and it chose Dennis Villeneuve (Arrival) and Garth Davis (Lion) to round out the top five. But Tom Ford’s BAFTA and Golden Globe nominations for Nocturnal Animals actually put him just a hair above Davis, who received relatively few major nominations outside of the DGA. 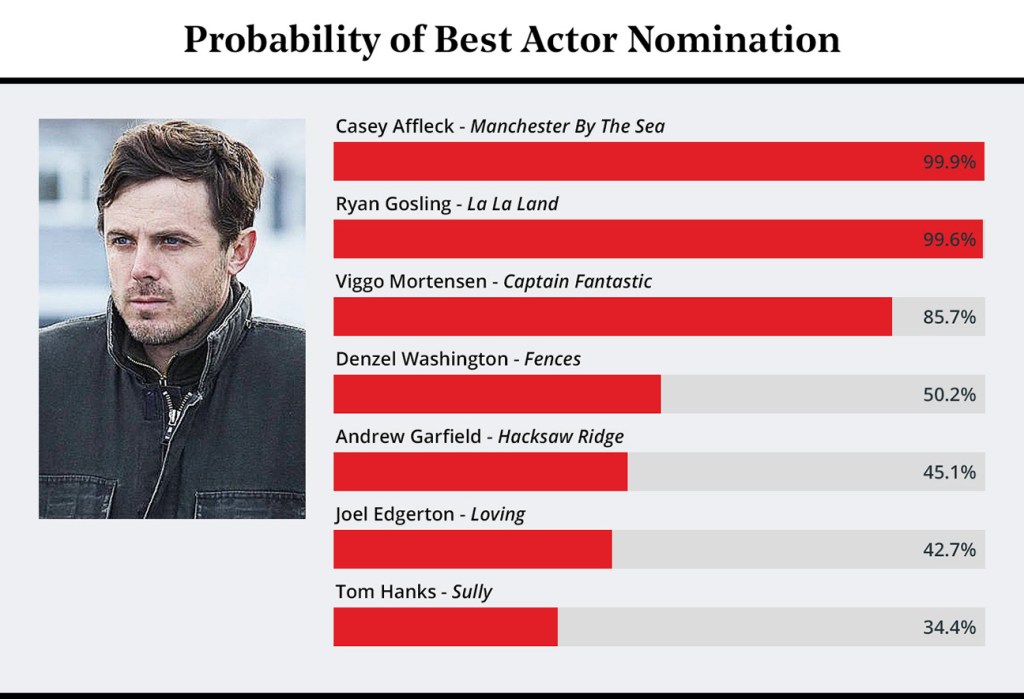 You can pencil in Golden Globe winners Casey Affleck (Manchester by the Sea) and Ryan Gosling (La La Land). As the Screen Actors Guild has predicted 81 percent of best actor nominees since its founding, the math looks most kindly upon the three remaining SAG contenders: Viggo Mortensen (Captain Fantastic), Denzel Washington (Fences) and Andrew Garfield (Hacksaw Ridge). But don’t count out Joel Edgerton (Loving) or Tom Hanks (Sully) just yet. 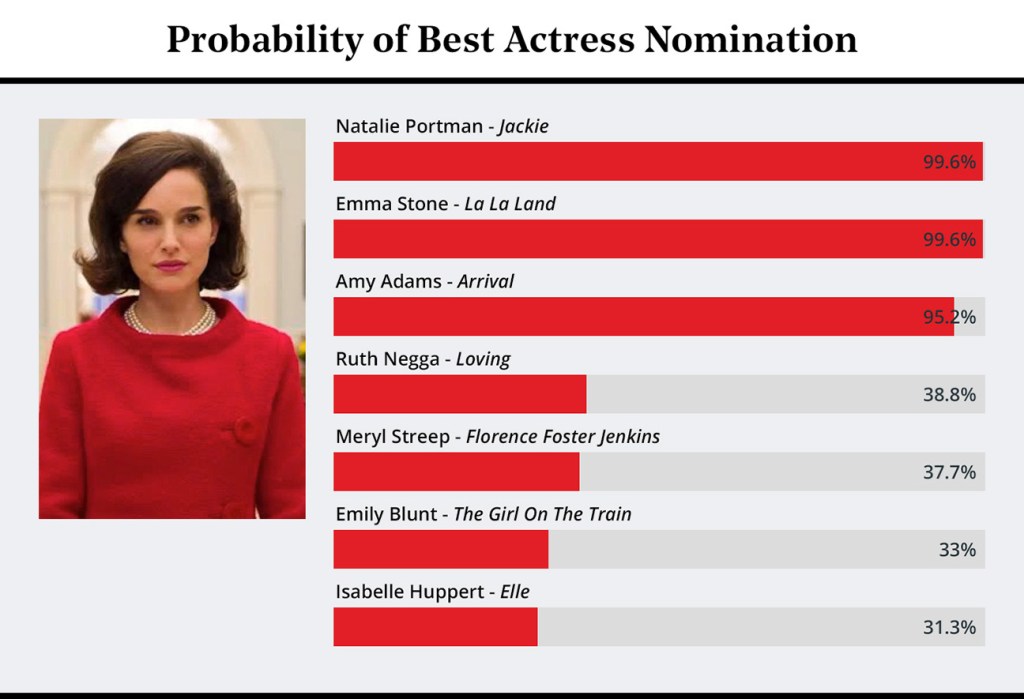 Oscars: New Format to Be Used for Nominations Announcement

Natalie Portman, Emma Stone and Amy Adams have been sufficiently lauded by SAG, BAFTA and others, so they have very clear paths to the nomination. Then, the race gets tight. From Ruth Negga, who has earned key critics’ nominations for her work in Loving, to SAG/BAFTA nominees Meryl Streep (Florence Foster Jenkins) and Emily Blunt (The Girl on the Train) to Golden Globe winner Isabelle Huppert (Elle), we’ve got ourselves a very tight race for those last two slots. 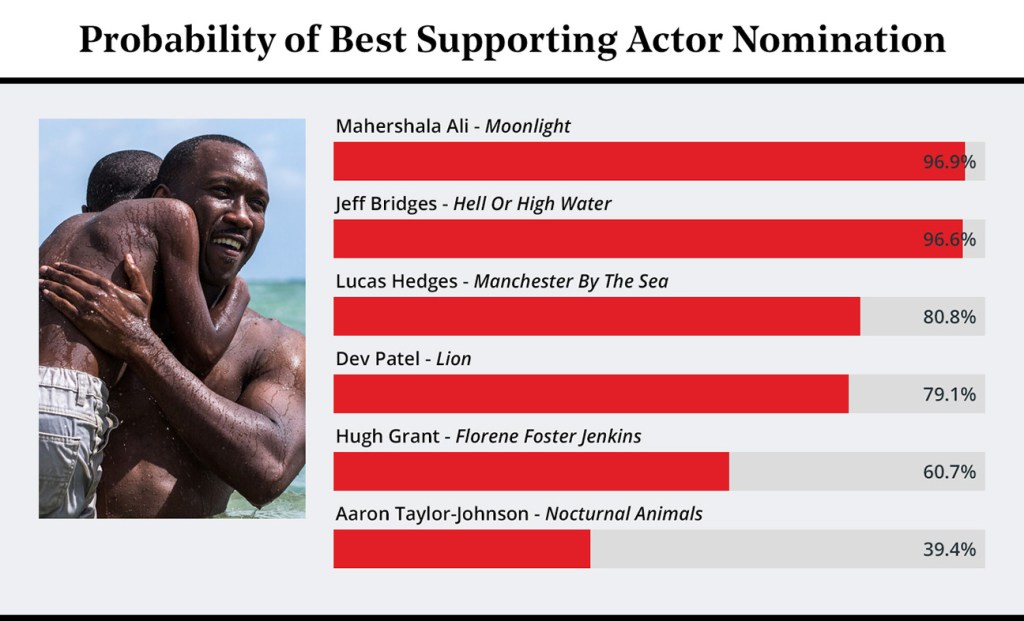 Why does Aaron Taylor-Johnson, fresh off his win at the Golden Globes, sit in sixth place? That’s because of the power of SAG, which did not nominate the Nocturnal Animals star, instead choosing the five actors listed above Taylor-Johnson. 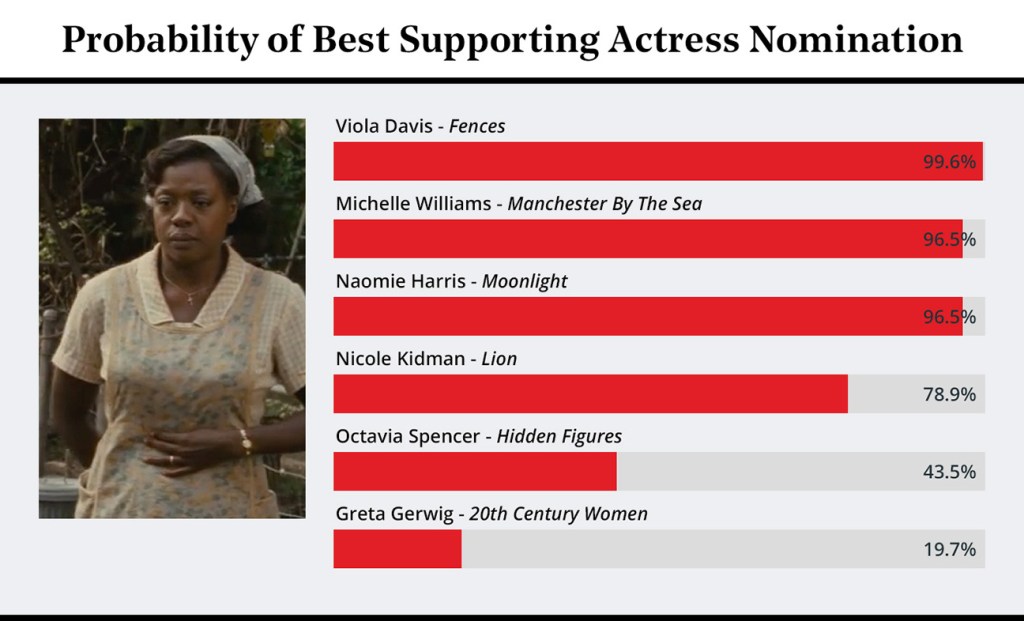 Viola Davis (Fences), Michelle Williams (Manchester by the Sea), Naomie Harris (Moonlight) and Nicole Kidman (Lion) have sailed through the first stretch of awards season, and seem like fairly safe bets according to the math. Right now, it looks like a battle between SAG nominee Octavia Spencer (Hidden Figures), Critics’ Choice nominee Greta Gerwig (20th Century Women) and perhaps a mystery outsider for the last slot.

Ben Zauzmer (@BensOscarMath) uses math to predict and write about the Oscars for The Hollywood Reporter. He recently graduated from Harvard with a degree in applied math, and he now works as a baseball analyst for the Los Angeles Dodgers.

Oscars: New Format to Be Used for Nominations Announcement