A host-less affair for the first time in decades, the cameras at Sunday’s 2019 Oscars had a lot to keep up with during the star-studded event. But beyond all the hilarious, shocking and emotional moments the camera’s caught, there were plenty more memorable moments happening off-screen. The Hollywood Reporter was on the carpet, in the audience and backstage to catch all the best award show moments that weren’t on TV.

Here’s a list of things the cameras missed during the 2019 Oscars.

Rami Malek Fell Off the Stage: After the ceremony ended, the best actor winner fell off the stage and was tended to by paramedics. The Bohemian Rhapsody star was photographed slipping near the Oscars stage with his statuette still in hand and was treated in the nearby front row. He quickly appeared to be physically fine, still participating in interviews backstage and later appearing to be in good spirits at the Governors Ball. 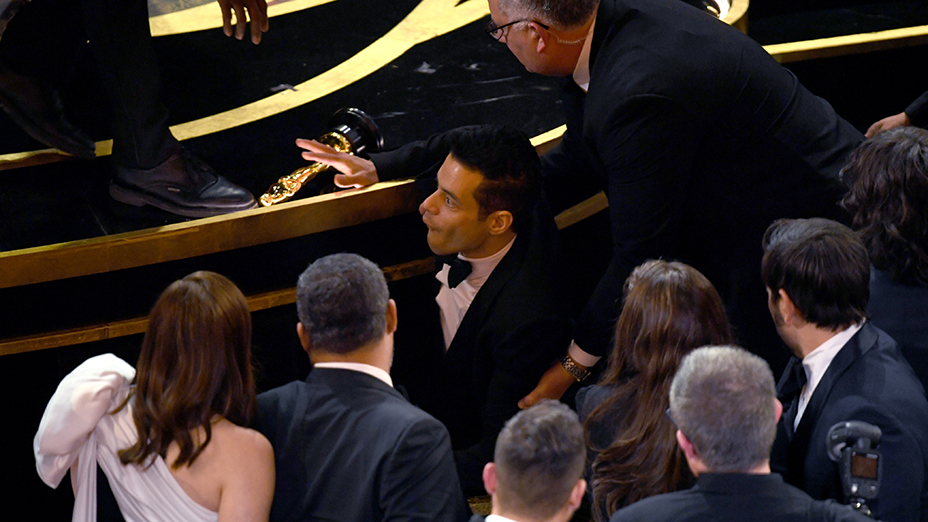 Spike Lee Was Visibly Upset After Green Book Win: One of just a few upsets during the 2019 Oscars, the first-time Oscar winner and BlacKkKlansman director was less than pleased after Green Book‘s best picture win was announced. The director sat with his back turned to the stage as the film’s cast and crew accepted the award.

Spike Lee just came backstage with a glass of champagne: “This is my sixth glass. And you know why.” #Oscars

SZA was the 2019 Oscars last carpet arrival: Though Kendrick Lamar and SZA did not perform their hit from the Black Panther soundtrack, “All the Stars,” which was up for best original song, SZA still managed to make a red carpet impact. While A Star Is Born actress Lady Gaga was initially thought to be the person to earn the illustrious ‘last person to walk the carpet’ honor, it ended up being the Grammy and Oscar-nominated singer, SZA.

Jkjk SZA is the last down the carpet pic.twitter.com/PZPMIV5Irq

James McAvoy’s one-of-a-kind Oscars shirt: While most attendees of the Academy Awards want to walk away with the iconic golden statue, James McAvoy walked away with something a little bit different. Snapping a photo in the Dolby Theatre, the Glass actor and Oscars 2019 presenter captured a white button-up covered in the signatures of fellow celebrities.

Went to the Oscars. Presented. Got mugged by sharpie wielding celebrities. #thuglebrity I’m sure my shirt is going to be defaced by more of these entitled graffiti mentalists as the night goes on.

Lady Gaga had a night full of hugs and a second standing ovation: Not only did best actress nominee Lady Gaga perform and win for her A Star Is Born single “Shallow,” but she spent the night celebrating it and others’ wins with celebrity guests and nominees. The singer could be seen throughout the night hugging various attendees in the front row, from Glenn Close and Melissa McCarthy to Rami Malek and Green Book‘s Nick Vallelonga.

Now it feels like the #Oscars. @ladygaga has arrived and is graciously going down front row saying hi to nearly every single person starting with Rami Malek. Spike Lee comes over, almost trips, but recovers to hang with Rami for a minute. pic.twitter.com/xBH4e72ExC

Gaga, along with her A Star Is Born co-star and director Bradley Cooper, also stepped out to a second standing ovation after receiving their award for best original song.

Something major just happened. After “Shallow” perf, @ladygaga & Bradley Cooper exited stage for commercial break. During break, they came back to their seats from stage then audience gave them another standing o. I’ve never seen that happen for any performers. Cue embrace#Oscars pic.twitter.com/k9wNh66tn1

Constance Wu and Awkwafina Reunited: Comedian and star of Crazy Rich Asians Awkwafina made her presenting monologue all about her first time attending the Oscars before going to to celebrate the moment even further with her Crazy Rich Asians co-star Constance Wu. The two snapped a playful photo during the ceremony celebrating their hosting duties.

We presented at the Oscars! I love @awkwafina so much ?? @crazyrichasians photo by @jonmchu

Jason Momoa’s diaried his experience presenting with Helen Mirren: The Aquaman actor is known for getting boisterous, and he was no different during this year’s 2019 Oscars. While visibly giddy on stage, he was even more so backstage as he prepared to present with actress Helen Mirren.

Despite his excitement, Momoa didn’t miss a chance to have a small Game of Thrones reunion with co-star Emilia Clarke.

Chris Evans helped Regina King walk on stage: Oscars dresses are often feats of fashion, which can make navigating the theater and stage particularly tricky. But at the 2019 Oscars, best supporting actress winner Regina King had Chris Evans to assist her and her dress with getting up the stage stairs so she could accept her award. After King briefly stumbled on her dress while approaching the stage, the Avengers actor politely offered a helping hand.

This gets my vote for best #Oscars moment of the night: #BGNOscarWatchParty #Oscars2019 pic.twitter.com/LbzWPxiMoH

Black Panther and Green Book stars hugged it out: The carpet is the the first and one of the easiest places to catch stars interacting and the 2019 Oscars were no exception. Before the evening delivered a best supporting actor and best picture win for Green Brook, its star Mahershala Ali and Black Panther actor Winston Duke could be seen chatting it up and hugging before they made their way inside the auditorium.

On the Oscar red carpet: Mahershala Ali and ?@Winston_Duke? meet and hug it out. pic.twitter.com/yaXjjBI254

Oscars’ 2019 drink menu: Each year the Oscar’s delivers a specialty cocktail along with a slew of drink offerings for its A-list attendees. This year’s cocktail was the Columba, which guests were privy to, along with wine offerings from the Francis Ford Coppola Winery.

Here’s what the #Oscars bar is serving up today in this super packed lobby bar situation. pic.twitter.com/OLSxsKVoCo

Spike Lee’s cut-off acceptance speech: BlacKkKlansman director and first time Oscar winner Spike Lee raced onto the stage after he found out that he had won for best adapted screenplay. After sharing an excited embrace with long-time collaborator Samuel L. Jackson, the writer and director turned to the microphone to begin a speech that would touch on slavery, black success and the 2020 election. But before the speech had even started, part of it was censored out Speaking directly into the mic, Spike Lee told the room, “Do not turn that motherfucking clock on!”

It was a speech that comedian and Daily Show host Trevor Noah captured being written in real time.

While walking around backstage, I noticed a small figure hunched in a corner writing something. I got closer and realized it was Spike Lee writing an acceptance speech for his Oscar nominations. I asked him if I could take this picture to remember the moment and he said yes and “I hope I get to use this” Well you got to use the speech @officialspikelee and it was a long time coming! Ladies and gentlemen Oscar Award Winner- Spike Lee #Legend #Oscar #blackklansman