The 93rd annual Oscars are being handed out Sunday night. In case you missed the action, here are some of the biggest moments.

During the opening of the Oscars on Sunday, Regina King made mention of the recent Derek Chauvin verdict. “It has been quite a year, and we are still smack-dab in the middle of it,” began King (pictured above). “And I have to be honest: If things had come differently this past week in Minneapolis, I may have traded in my heels for marching boots.” Chauvin was found guilty on all counts Tuesday for causing George Floyd’s death. The disgraced former Minneapolis police officer could be sent to prison for the rest of his life.She also addressed those who say Hollywood should just stick to entertainment. “Now I know a lot of your people at home want to reach for your remote when you feel like Hollywood is preaching to you. But as the mother of a Black son, I know the fear that so many live with. And no amount of fame or fortune changes that, OK? But, tonight, we are here to celebrate.” — Ryan Parker

During a game of “guess that song,” Questlove played music and guest-host Lil Rel Howery asked if attendees could guess if the song was nominated for an Oscar, won an Oscar, or none of the above. Andra Day guessed that “Purple Rain” wasn’t even nominated “like some bulls***,” while Oscar winner Daniel Kaluuya joked with Howery about being “saved” in Get Out. Glenn Close correctly guessed the song “Da Butt” from School Daze, also getting bleeped before showing off her dancing skills. — Jennifer Konerman 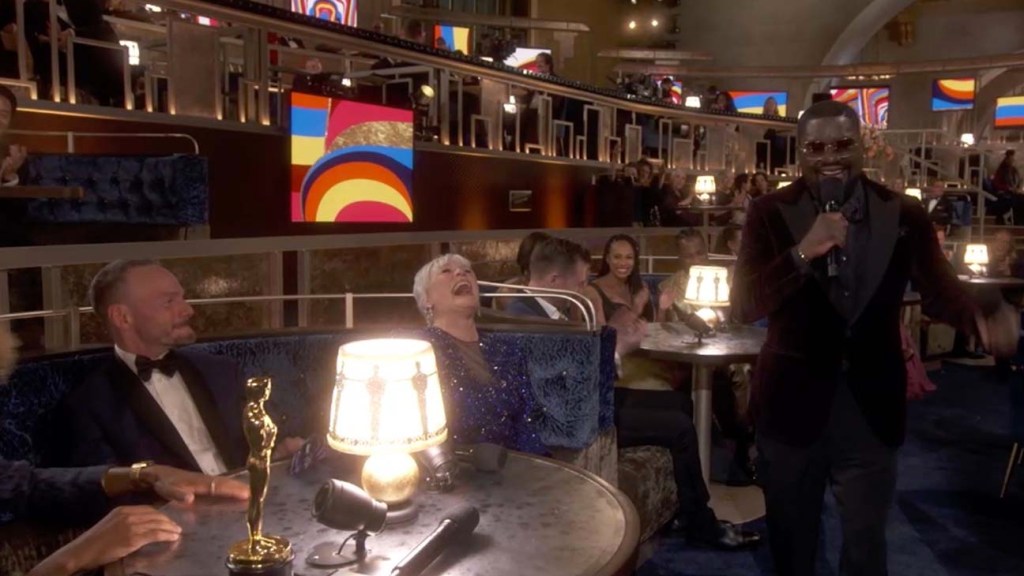 Daniel Kaluuya Says “There’s So Much Work to Do”

Daniel Kaluuya won best supporting actor for his role in Judas and the Black Messiah. In his speech, Kaluuya took a moment to honor Black Panther Chairman Fred Hampton, whom he portrayed in the film. “What a man. How blessed that we lived in a lifetime that he existed,” he said. “He was on this earth for 21 years and he found a way to feed kids breakfast, educate kids, give free medical care against all the odds.” Of the Black Panther party, the actor said “they showed me how to love myself and with that love they overflowed it to the Black community and then to other communities” and showed “the power of union, the power of unity.” Kaluuya also told the audience that there’s “so much work to do” and everyone must celebrate life. “We’re breathing, we’re walking. It’s incredible.” Though he said he would “get back to work Tuesday morning,” he quipped, “tonight I’m going up!” — Lexy Perez

Emerald Fennell accepted the best original screenplay award for Promising Young Woman. “So the only speech I ever wrote is when I was 20 and I looked to see if there would be anything useful from it, but unfortunately I only thanked Zack Morris from Saved by the Bell, who was my very supportive husband,” joked Fennell at the podium. “Unfortunately he hasn’t been as much a part of my life as I’d hoped, and so that speech is not that useful.” Fennell continued, “All I can say is, trying hard not to cry which is difficult as an English person because we don’t cry ever. This film was made by the most incredible people in the world who made it in 23 days, and just brought their complete genius and love and humor to it.”She said at one point, “Lucky chap, focus!” to herself, before continuing her speech. Fennell thanked the film’s producers for “standing behind this film always, and for never giving up.” She went on to thank the cast and crew, “the kindest in the world, and the greatest in the world.” — Trilby Beresford

Mia Neal and Jamika Wilson became the first Black winners of the Oscar in makeup and hairstyling, on the strength of their work on Ma Rainey’s Black Bottom, the Netflix drama based on August Wilson’s play of the same name that follows the titular blues singer (Viola Davis) during a recording session in 1920s Chicago.” Thank you to our ancestors who put the work in, who were denied, and never gave up,” said Neal, who spoke as she accepting the award on stage with Wilson and Sergio Lopez-Rivera. “I stand here as Jamika and I break this glass ceiling with so much excitement for the future — because I can picture Black trans women standing up here, and Asian sisters, our Latino sisters and indigenous women. I know one day it won’t be unusual or groundbreaking it will just be normal.” — Carolyn Giardina

Frances McDorman Howls Like a WolfNomadland was named best picture at the 2021 Oscars on Sunday.”We thank the Academy and we thank our brilliant fellow nominees,” said director and producer Chloe Zhao, as she stepped up to the podium with producers Mollye Asher, Dan Janvey, Frances McDormand and Peter Spears. McDormand, who also won best actress for the film, added that when it is possible to return to the movies, “Please watch our movie on the largest screen possible.” She also encouraged Oscar attendees to watch every film that was nominated, in a dark theater. “We give this film to our wolf,” said the actress and producer, before going into a short howl, a reference to Nomadland sound mixer Michael Wolf Snyder, who died in March. — Trilby Beresford 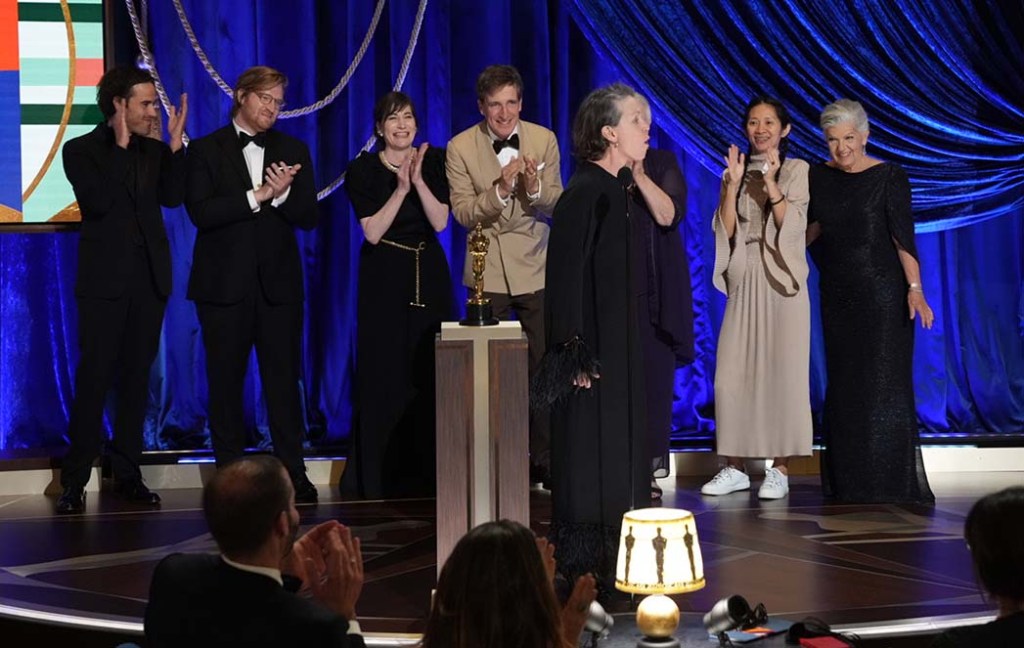 Sound of Metal won the Oscar in sound, a new category introduced by the Motion Picture Academy this year that combines the former sound editing and mixing categories. Starring Oscar-nominated Riz Ahmed as a drummer who is losing his hearing, the film deftly uses sound — and the absence of sound — to give the audience his aural point of view. This marked the first Academy Award for supervising sound editor/designer Nicolas Becker, production sound mixer Phillip Bladh and rerecording mixers Jaime Baksht, Carlos Cortés, and Michelle Couttolenc, who was one of just two women nominated in the category this year. Speaking backstage about the combined category, Becker described the “deep collaboration” of the sound editing and mixing team, saying the combined award is “amazing because we are a team. I believe you have to work in close collaboration. … I really like it. This makes sense to be all together.” — Carolyn Giardina

Pixar’s jazz-infused Soul won the Academy Award for best animated feature, delivering a record third Oscar in the category to director Pete Docter, and the first Oscar to producer Dana Murray. The Academy Award for best animated feature was first presented in 2002, and since then a film from Pixar has now received this honor 11 times. Docter, who was named Pixar’s chief creative officer in 2018, previously accepted Oscars in this category for Inside Out and best picture nominee Up. — Carolyn Giardina

Chloé Zhao became only the second woman to ever win the Academy Award for best director, following since Kathryn Bigelow, who won for The Hurt Locker in 2010. The first line of Three Character Classics, Zhao recalled, translates to “People at birth are inherently good,” she said in her speech. “I still truly believe that today,” Zhao said. “I have always found goodness in the people I met everywhere in the world. This is for anyone who has the faith and courage to hold on to the goodness in themselves and each other and to you, you inspire me to keep going.” Zhao previously became the first woman since Bigelow to win the BAFTA Award for best director, Directors Guild award for outstanding achievement in motion pictures. She also won the Golden Globe for best director, where she became the first woman to win that prize since Streisand. With her win, the Chinese Zhao also becomes the first non-white woman to win best director. — Hilary Lewis

Tyler Perry shared a powerful message about people not hating one another when he accepted the Jean Hersholt Humanitarian Award honor. “I hope that we would refuse hate,” he said before dedicating the award “to those who want to stand in the middle, no matter what is around the walls; that’s where healing happens. That’s where conversation happens. That’s where change happens.” — Ryan Parker

The Minari star won best supporting actress and, in doing so, became the first Korean actor or actress to win an Oscar in the show’s 93-year history. “Usually, when I’m living in the other part of the world, I just watch the television and there is the Oscar,” said the 73-year-old actress in her acceptance speech. “But me, being here, myself. I cannot believe I’m here. OK, let me pull myself together.” In thanking her Minari “family,” she called director Lee Isaac Chung “my captain,” and joked of her fellow nominees, “I’m luckier than you,” crediting “American hospitality” for her win, to big laughs. She then held up her trophy — which she dedicated to her first director — and spoke of her two sons, who “made me work,” adding, “This is the result. Because mommy works so hard.”When first taking the stage, Youn shared the proper pronunciation of her name (“Tonight, you are all forgiven,” she noted) and thanked presenter Brad Pitt, whose Plan B produced A24 film Minari. “Mr. Pitt, finally. Nice to meet you. Where were you while we were filming in person?” — Jackie Strause

H.E.R. Promises “I’m Always Going to Fight for My People”

H.E.R.’s “Fight For You” from Judas and the Black Messiah took home the Academy Award for best original song. H.E.R. — whose real name is Gabriella Sarmiento Wilson — collaborated with D’Mile and Tiara Thomas for the “Fight for You” anthem. During her acceptance speech, the singer was quick to thank her collaborators: “The song wouldn’t be what it was without them.”The singer later took a moment to express the power music and film has to “tell the truth.” “Musicians, filmmakers I believe we have an opportunity and responsibility, to me, to tell the truth and to write history the way that it was and how it connects us to today and what we see going on in the world today,” she said.She added, “Knowledge is power, music is power and as long as I’m standing I’m always going to fight for us, I’m always going to fight for my people and fight for what’s right and I think that’s what music does and that’s what storytelling does.” — Lexy Perez