In 1938, World War I drama The Grand Illusion became the first foreign-language film ever nominated for best picture. Jean Renoir’s movie, which follows a blue-collar French soldier imprisoned by the Germans, is widely considered a masterpiece — but that was only one factor in its selection: The story tapped into a raging anti-war spirit then rampant in America, amid fears the country would be sucked into World War II. In the end, however, this wasn’t enough to land it the top prize, and it lost to the now-forgotten Life of Emile Zola.

Decades later, only nine foreign films (as the Academy defines them) have been nominated for best picture, three directed by Hollywood veterans — Clint Eastwood’s Letters From Iwo Jima, Ang Lee’s Crouching Tiger, Hidden Dragon and Alfonso Cuarón’s Roma. None has won. Will this year break with tradition?

The answer, most insiders say, is it’s a long shot. Last season, Roma seemed poised to win after earning 10 noms, only for Green Book to snatch away the best picture prize. In hindsight, pundits were quick to list the reasons for Roma’s defeat, ranging from its slow pace to its black-and-white photography to its funding by a streamer (Netflix) to vote-splitting between the best picture and foreign-language categories.

This season, one entry has emerged with a serious chance: Bong Joon Ho’s Parasite, a surreal fantasy about a dirt-poor family that slowly insinuates itself into the life of a wealthy young couple, only to turn against them. Hailed by critics in the most lavish terms — “[It] obliterates the tired distinctions between art films and popcorn movies,” wrote The New York Times — the film has earned $14.4 million in North America and $112 million worldwide.

Since May, when the South Korean drama won the Cannes Film Festival’s Palme d’Or in a unanimous vote, it has steadily gained ground with Academy members. A top screenwriter tells THR it’s his favorite movie of the year, while a comedy producer says the film’s parable of rich-versus-poor could not be better timed for Hollywood liberals sick of social injustice.

A significant number of voters appear inclined to rank Parasite No. 1 on their nomination ballots. Whether that’s enough to qualify it for a nom or whether it will also need to pick up some second- and third-place votes in the preferential-vote system is the question.

A bigger hurdle for Parasite is likely to come in phase two, when it has to cross the line from a nomination to a win.

Unlike the other best picture contenders this year, Parasite is also likely to be nominated for the international feature film Oscar, leaving Academy members with a quandary: Do they split their votes between the two awards, thereby diminishing Parasite‘s chances of winning either — or do they choose it in both categories, thus positioning it for an unprecedented double victory?

Many insiders think that dilemma cost Roma the top Oscar. But one Parasite supporter argues the comparison is false: “Roma was a beautiful film, but it never had that ‘Oh my God!’ feeling. Parasite is a passion vote.”

If so, how can Parasite solidify its chances? Here’s how:

First and foremost, obviously it needs to land the best picture nomination. That means persuading enough people to see a movie with subtitles (often a barrier) and campaigning in places where the feature is likely to do well: among indie and international members. The Parasite team is traveling to London in December ahead of the BAFTAs and the pic’s February U.K. opening.

Second, voters must be convinced the film has a legitimate chance. Netflix may have shaken the walls with its Roma campaign, says one strategist. “It allowed people to consider this could be done” — that a foreign entry could become a key contender for best picture. Now Parasite must publicize its critical raves and audience exit scores to prove it’s no ordinary film.

Third, the movie needs to boost its actors. Given how few pictures win the ultimate Oscar without acting noms, campaigners should work to ensure that at least one of the cast gets recognized. (Another largely foreign-language film, The Farewell, is heavily promoting Awkwafina and Chinese actress Zhao Shuzhen.) That’s underway: Parasite‘s Park So-dam attended October’s Governors Awards with Bong, while Song Kang-ho will join him in London.

Fourth, the film has to remind voters of its relevance. Phase two will heat up as the Democratic Party primaries gather steam and there’s no better time to promote this message: In an age of nationalism, think international. So far, however, there are no plans to connect the movie more directly to politics, and campaigners are wary of seeming exploitative.

Parasite may have missed its best chance of improving its odds: by avoiding the international feature category. Now, paradoxically, as Korea’s official submission, it faces an embarrassment of riches. 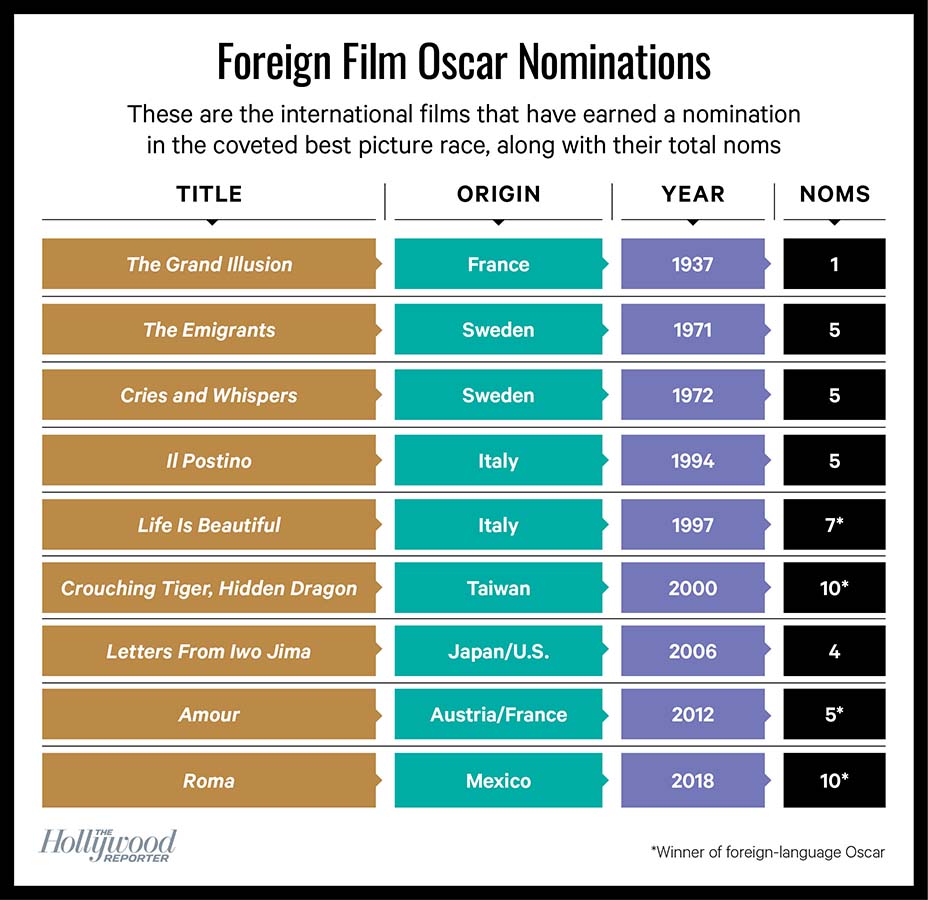