The process of making Fences into a film began back in the 1980s, when August Wilson initially adapted his Pulitzer Prize-winning play for the screen, then stalled due to his insistence that the movie be directed by a black filmmaker.

Thirty years later (and more than a decade after Wilson’s death), that director ended up being Denzel Washington, who also starred in the 2010 Broadway revival of the play, winning a Tony Award for his portrayal of Troy Maxson, a frustrated middle-aged former Negro League ballplayer who’s having trouble accepting change in 1950s Pittsburgh.

With the help of Todd Black, his longtime producing partner, and Scott Rudin, Washington made a film that was true to the emotional intensity of the play yet cinematic. It has been recognized by the Oscars with a nomination for best picture, acting noms for Washington and Viola Davis, and a posthumous nomination for Wilson for adapted screenplay.

How did you first get involved with this project?

I produced the two other films Denzel directed — Antwone Fisher and The Great Debaters. He did the play six years ago on Broadway. Scott Rudin had given him the screenplay, the way August [Wilson] had written it, but Denzel didn’t want to direct it then and wanted to do the play instead. Last summer, when we were shooting Magnificent Seven in Baton Rouge, he told me he was ready. One weekend during the Magnificent shoot, we went to Paramount, which had held the rights for 20 years, and Scott and I got all the financing together along with Paramount. We moved into J.J. Abrams’ empty office and got the script to where it needed to be, expanding on the play. It all happened super quickly — an A-plus experience. I wouldn’t change anything about it. 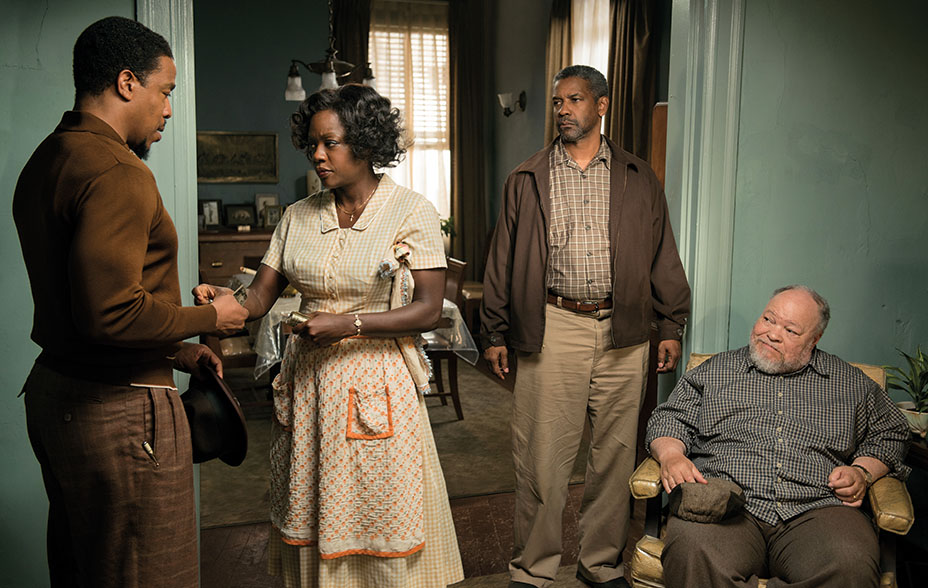 There weren’t really any. We knew what the budget was and that we were going to shoot all practicals in August Wilson’s old neighborhood in Pittsburgh. A lot of it still looks the same as it did in the ‘50s; that house is real.

What approach did you take to casting the film?

We only had to recast the kids, since Denzel wanted to bring back everyone from the Broadway play. These kids never felt like outsiders because the cast really embraced them. Jovan Adepo from The Leftovers played Cory; it’s his first film. The other actors already knew the material so well because they did it on Broadway, even though it was six years ago, so [Jovan] had to catch up and hold his own. Denzel shot two scenes with each of the four or five actors there and even had them improv a little bit. Jovan might have been shaking on the inside, but he went toe-to-toe with Denzel; he didn’t back down. He wasn’t afraid of Denzel’s character.

Oscars: Denzel Washington Says "We, as Americans, Need to Unite"

What was the toughest aspect of making this film?

Trying to open up the movie. We didn’t want to just film a play, so we had to figure out how to stay true to August Wilson’s brilliant dialogue, but also make it so your eyes can move and not stay in the same place the whole time. We tried to find the balance of movement versus stillness — making it come alive while keeping it intimate.

How will attending this year’s Oscars compare to other times you’ve gone?

Last time I brought my mom, and I wasn’t nominated. This time, I’m taking my wife, and I am nominated! We’re happy just to be invited to the party. If we had a song-and-dance musical number in it, we’d maybe be in real competition with La La Land, but we don’t. I know everyone says this, but it’s true: Just to get invited is so cool. Everyone thinks La La Land is going to win best picture, so I can go, relax and enjoy myself, instead of worrying about winning for three and a half hours. Our movie has gotten a lot of nominations and awards already, and our box office is nice and big — it’s cliche, but we’ve already won.

What other movies have been your favorites this awards season?

Sing Street and The Edge of Seventeen. I love the spirit and energy of these two movies and that they had fresh actors. Also, Moonlight.

How tricky has it been balancing your celebration for this film and the Oscar nominations when there is so much turmoil going on in the news here and abroad?

I’m grateful because our film is exactly what’s happening in the world right now. We couldn’t be more topical: It’s about changes in the world and which ones Troy Maxson could and couldn’t accept. The world moves on, and you have to either fight the change or effect the change. What’s happening in our world right now is beyond frightening — I think our president is completely the wrong guy to be implementing changes and I do not support or believe in anything he’s doing. He’s completely embarrassing our country right now. We all have red blood, and I don’t understand how you can tell people that they can’t come into our country when that’s what our country stands for.

Any advice for host Jimmy Kimmel?

He’s f—ing brilliant. I love him. He’s going to add a super light touch. If anything, just be fearless. Don’t censor yourself.

What are your thoughts on people giving politically charged speeches at awards shows?

I’m absolutely for them. You get the biggest audience you can get. If I get a chance to get up there, it’s my job as an American citizen to say to [Trump], “You have to stop the nonsense and be a much more thought-out, dignified president than you’ve been.” I believe in our country and I don’t believe in our president.