In the late 1990s, shortly before his death in August 2000, Sir Alec Guinness incurred the wrath of legions of Star Wars fans when he admitted he had concerns about the movie’s long-term impact.

“A refurbished Star Wars is on somewhere or everywhere,” he wrote in his memoir, A Positively Final Appearance. “I have no intention of revisiting any galaxy. I shrivel inside each time it is mentioned. Twenty years ago, when the film was first shown, it had a freshness, also a sense of moral good and fun. Then I began to be uneasy at the influence it might be having. The bad penny first dropped in San Francisco when a sweet-faced boy of twelve told me proudly that he had seen Star Wars over a hundred times. His elegant mother nodded with approval. Looking into the boy’s eyes I thought I detected little star-shells of madness beginning to form and I guessed that one day they would explode.

“He burst into tears. His mother drew herself up to an immense height. ‘What a dreadful thing to say to a child!’ she barked, and dragged the poor kid away. Maybe she was right but I just hope the lad, now in his thirties, is not living in a fantasy world of secondhand, childish banalities.”

“Secondhand, childish banalities.” That may well be the unkindest cut any actor has ever inflicted on his picture. But it’s hard to deny Guinness’ thesis: that movies have become all about a “fantasy world” in which real people and real problems, perhaps even reality itself, have essentially vanished from the screen.

The success of Logan this weekend is further proof of that. Its $88.4 million domestic opening trounced every other film, reinforcing studios’ desire to cater to their audience. Even with Moonlight fresh off an Oscar win, its earnings were a mere flea bite compared to the latest Wolverine chomp.

The Oscars, in fact, marked the end of reality as we know it, at least until the next awards season kicks into life. Even then, only a dozen or so reality-based dramas will raise their heads above the fray, moles gasping for oxygen in an atmosphere made toxic by the unreal.

Sure, there are exceptions that keep serious-minded enthusiasts hoping for more: La La Land has earned nearly $400 million at the global box office, and Hidden Figures has already made half that amount — both proof that people-centric dramas can still break through, given a shove and a prayer. But they remain outliers, pilot fish swimming in the slipstream of the box-office sharks, or remoras sucking on the flesh of a $38 billion narwhal.

Think I’m exaggerating? Consider this: Among the top 15 domestic box-office hits of films released in 2016, as Producers Guild president Gary Lucchesi pointed out to me last month, not one was about a real human being. I don’t mean a human being who’s existed in real life; I mean one who wasn’t animated, endowed with superhuman powers or preternaturally gifted at dodging bullets or the martial arts — a flesh-and-blood mortal, like us.

Look at the international box office, and the picture’s even bleaker. Among the top box-office hits, you have to go all the way down to La La Land (currently ranked number 20 globally) to find a film remotely centered on life as we know it. Before La La began its surge, the only realistic movie was Sully, now ranked at number 33.

And it’s becoming harder and harder to make pictures like these. Just ask Bill Mechanic, the producer who spent 15 years getting Hacksaw Ridge off the ground, or La La Land‘s Damien Chazelle — as of last month the youngest director to win an Oscar — who wrote that way back in his student days, but only got a green light after Whiplash proved such a success.

I harbor no illusion that Hollywood past was ever idyllic, ever an oasis for the kind of film that’s gone MIA. The dream factory was built on the notion of escape, and founded by people who themselves had escaped the pogroms — a reality that made the dream world much more inviting. They had no truck with artists whose sole desire was to put people’s problems on the screen. Preston Sturges spoofed that very concept in Sullivan’s Travels, the 1941 comedy about a director who, after a voyage through the down-and-out, comes to see that escapism counts for something, too.

“If you want to send a message,” quipped Samuel Goldwyn, “try Western Union.”

Western Union’s looking awfully good, given the dearth of message movies these days.

Fifty years ago, the top 10 was teeming with movies about serious subjects: The Graduate, The Jungle Book, Guess Who’s Coming to Dinner, Bonnie and Clyde, The Dirty Dozen, Valley of the Dolls, You Only Live Twice and Thoroughly Modern Millie.

But now reality is like an endangered species, the artistic equivalent of the Javan rhinoceros or the leatherback turtle. How ironic that Hollywood insiders are at the forefront of decrying our president’s disconnect from the real world, when their own disconnect is almost as profound.

The more Hollywood disengages from reality, the more the public will, too. Unless executives, producers, writers and directors realize they’re part of the problem, there’ll be no solution. That may mean giving up the perks that come with massive global hits, but more spiritual and intellectual rewards will follow.

We’ve addicted audiences to the opium of the unreal; and worse, we’ve become addicted to it, too.

For more Galloway on Film, please check out the archive. 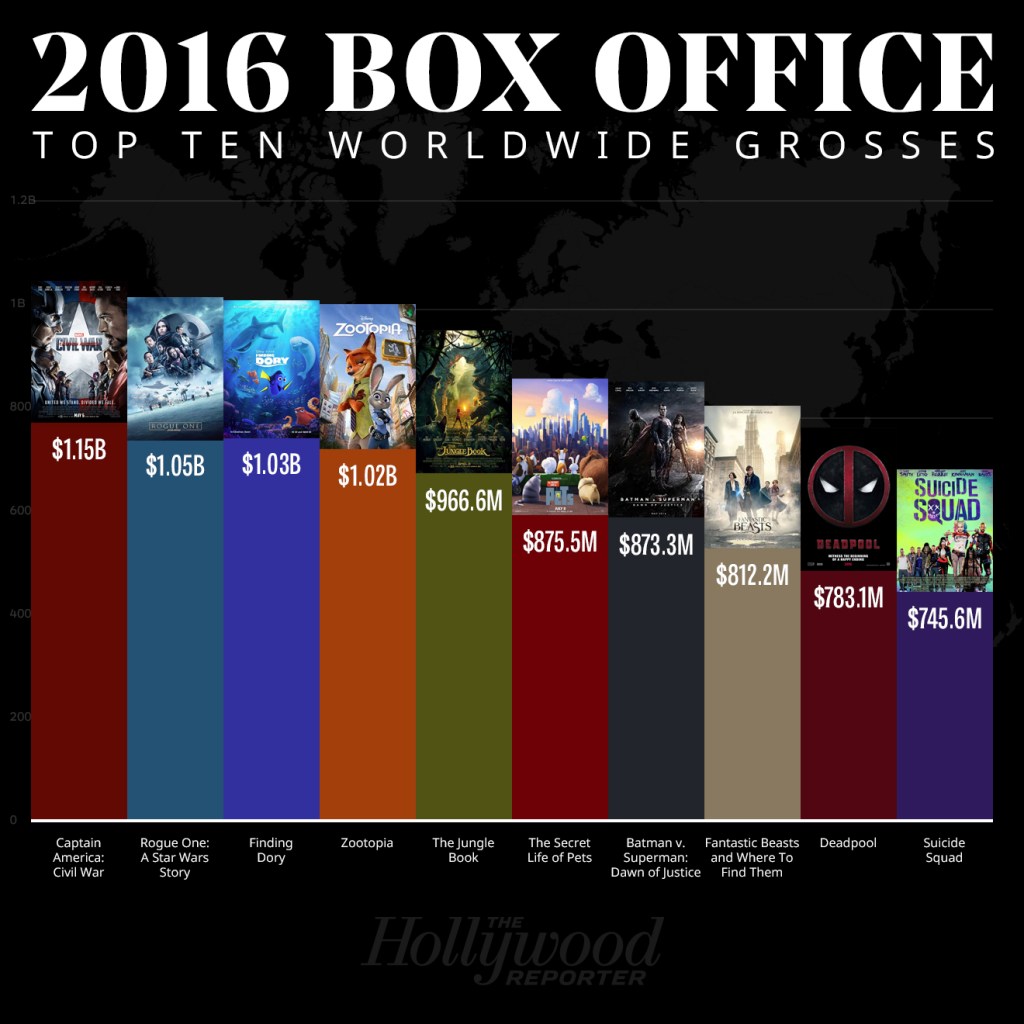