As nominees hit their Hail-Mary cleanses and agents lay the groundwork for post-Oscar quote hikes, the town’s army of shrinks is soothing the roiling emotions that lie beneath the just-glad-to-be-nominated miens of Oscar hopefuls. Dennis Palumbo, a Sherman Oaks-based licensed psychotherapist who specializes in treating Hollywood creatives, recalls one memorable Oscar session: “I had one patient, a big-name director nominated for an Oscar, whose psychic predicted he’d win. The day before the show, he told me that another nominated director — a friend of his — was told by his psychic that he’d win. Turned out to be the same psychic. And neither man won. My patient’s response? ‘Now I don’t know who to trust.’ ” He continues: “We all know that thing where you see the five nominees and then watch the frozen plastic smiles on the faces of the losers,” says a sympathetic Palumbo. “I’ve had patients with that frozen smile and thought, ‘It’s going to be about six weeks here in the office with this guy.’ ”

Working in Hollywood is stressful, but when Oscar season rolls around, a heightened wave of anxiety sets in for even the most seasoned veterans. “I have been to a lot of these ceremonies, and each time it feels like I had never done it before. The flashes seem brighter, the carpet seems crazier,” says best supporting actor nominee Jeff Bridges (Hell or High Water), who took home the Oscar for best actor for 2010’s Crazy Heart. “I still get stressed out at the idea of saying something. My mind overloads.”

Bridges is not alone. Whether you’re an actor or an agent, the Oscars can bring on a set of anxiety-ridden behaviors, starting with nomination announcements and continuing through campaigning, awards shows and the aftermath. “I have tremendous compassion for people both nominated and not nominated, because it’s like getting a report card when you’re a kid,” says Palumbo. “Some people find that [the Oscars] is the arbiter of how they can feel about themselves.”

HOW OSCARS STRESS MANIFESTS IN HOLLYWOOD

‘The most common form of anxiety across the board at this time of year is insomnia, says Philip Pierce, a clinical psychologist with Oscar winners among his patients who sees them “waking up in the middle of the night and not being able to get back to sleep over the uncertainty and the stakes.” Other symptoms include substance abuse, low-grade depression, disturbed appetite and spending sprees — which can simulate a low-grade version of the adrenaline rush that comes with winning an award. “There’s this thing where they just zone out, and it’s all across the board — it could be producers, actors, directors — they sit there in front of their computer and just go shopping,” says psychotherapist Larry Shaw, who treats patients across the industry spectrum. “[It gives them] control. Whether it’s on eBay or Amazon, you stick it in the cart and you’ve ‘won.’ “ 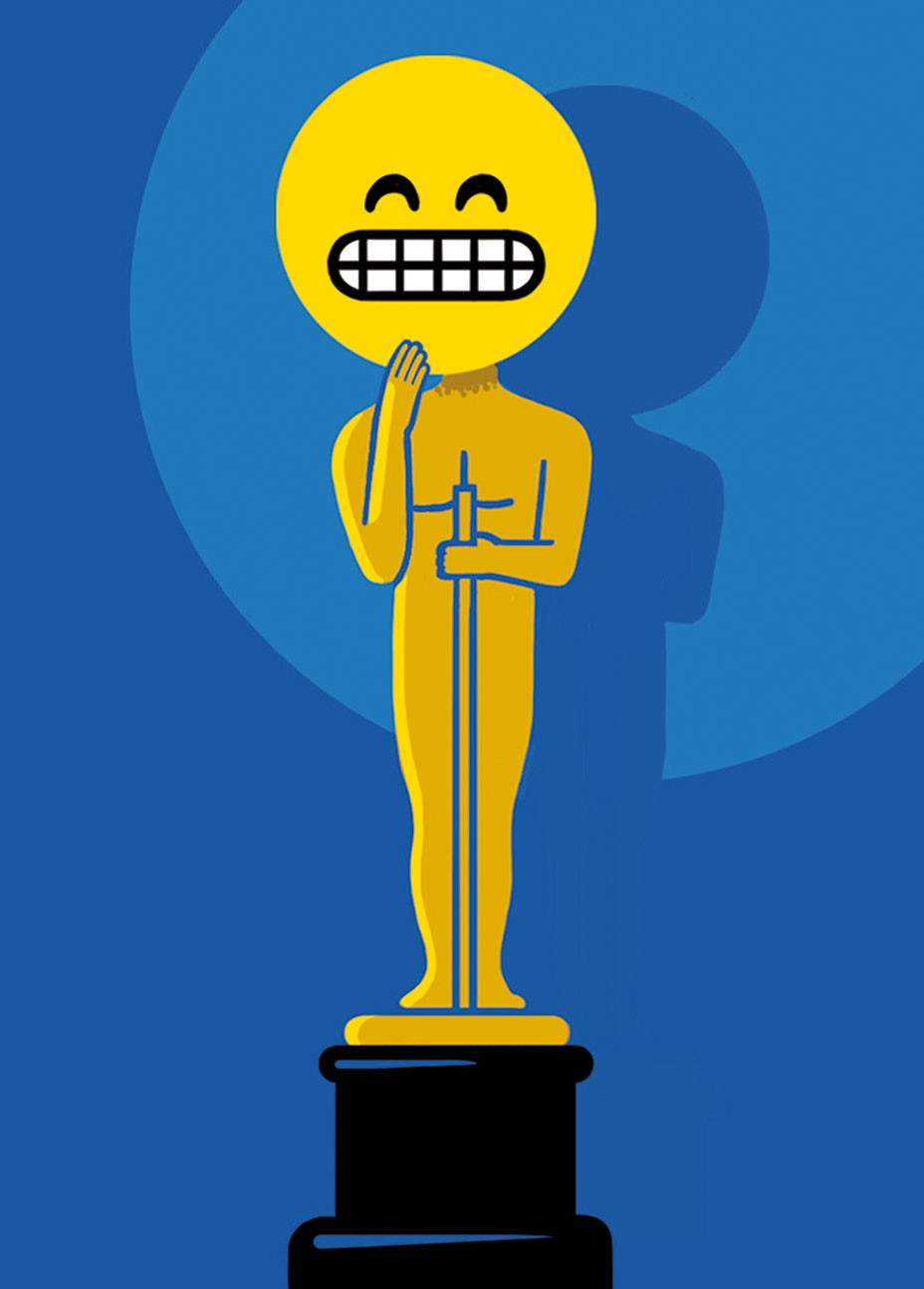 THE BIG PSYCHE DIVIDE: ACTORS, AGENTS AND EVERYBODY ELSE

Nominees who don’t spend time in front of cameras, including writers and producers, are typically the most anxious about awards season, according to Pierce. “They’re very much worried about the public aspects, talking to people they don’t know and being in a strange situation,” he says. “My directors, on the other hand, just assume they’re going to win.”

Actors generally are less stressed about campaigning, though there is the sheer physical exhaustion involved with engaging in endless red carpets, awards shows, junkets and photo shoots. “It seems like there is a lot more campaigning these days,” says Bridges. “There ought to be a special award for the best campaigner.” But high visibility also puts talent at a greater risk for emotional distress, according to David Levy, a professor of psychology at Pepperdine University. “When you’re the actor, you are the product. If you’ve written a screenplay, you’re attached to your baby. If you’ve directed a film, it’s your product. But when you’re a performer, you are the commodity. So when you get rejected, it’s you.” For some talent, “ironically, they have conflicting feelings about being in the spotlight,” adds Mari Murao, a Beverly Hills psychotherapist with nominated patients. “A part of them seeks it out, and often nothing terrifies them more.”

Nervous About the Oscars? 4 Tips for Dealing With Panic Attacks

Even agents and managers have their issues. “It would surprise my creative patients to know how much fear reps have, fear that their client is going to leave them if they become successful,” says Palumbo. “Creative types never see their reps as fear-driven. They transfer parental feelings on to them. I can’t tell you how many times I’ve had to say to a patient, ‘She’s your agent, not your mother.’ “

Levy also sees some reps taking their clients’ nominations personally. “Part of it is financial. If they’re an agent or a manager and their client wins an award, it means more work and a higher asking price, and they’re going to make more percentage on the next job.” But it’s ego-driven, too: “They feel personally let down if things don’t work out the way they want them to.”

THE AGONY OF DEFEAT

When it comes to Oscar night, Palumbo says some patients ask their families not to watch the broadcast because they can’t bear to have them see their reaction if they lose. One A-list patient, nominated for best supporting actress, asked him to “let us use our session to practice her ‘good loser’ face in case the camera was on her when one of the other actresses won,” says Palumbo. (A new low-downtime surgery is also an option; see page 102.) “I suggested we concentrate on her self-esteem issues instead.”

Losing sets off feelings of failure and lack of self-worth — “a lot of negative self-talk,” says Shaw. But “most of this stuff is beyond your control,” cautions Levy. “A lot of this is luck, happenstance. And some of it is politics.” Levy encourages his losing clients to talk about feelings, “but certainly not in the public arena.” It’s an ego issue, he says, “and that’s what I try to help them reduce,” using therapy to get his patients to not take things personally. “They’re too attached to the winning and losing.”

THE ANXIETY — AND GUILT — OF VICTORY

Winning a coveted statuette comes with its own unique stresses. The acceptance speech is the star of many a session on the couch. Even confident directors ask, “What if I win and I’ve got to go up?” says Jeffrey Blume, a licensed psychologist in Beverly Hills who has worked with creative talent for 25 years, adding that he deploys hypnotherapy or deep relaxation to “try to help them imagine going up onstage and practicing while they’re relaxed. So when they actually get up there, they can be relaxed.”

Some people feel survivor’s guilt, that they won and deserving others didn’t. “It’s hard sometimes for people to take in success and they feel guilty. Their friend or colleague didn’t win,” says Blume. Adds Pierce, “Many very successful people in the business have the deep-seated fear that they’re a fraud,” he says, adding that these patients often see their anxiety increasing after an Oscar triumph, “as they believe now they will surely be exposed.”

After all the excitement and celebration, post-Oscar blues can be common, followed by stress over ever measuring up again. “I had a writer come in a year ago with their award,” says Blume. “He had the anxiety of, ‘Now I’m supposed to write another masterpiece and I don’t have any ideas.’ ” Directors might apply extra pressure to themselves “because of the auteur theory — if you are nominated or win an Oscar for best director, you’re in the company of Billy Wilder, John Ford, Steven Spielberg, Stanley Kubrick, the real heavyweight pantheon,” says Palumbo. The sentiment that you’re only as good as your last Oscar, says Levy, and the expectations can be tremendous: “How do you top that? For most people, you can’t.” Levy suggests clients look to past winners and losers to see how they conducted themselves. “This is uncharted territory for most people, but if you look at who has been in that situation, they all have similar struggles, so the commonality in that is helpful.” In fact, says Palumbo: “I think it’s better to be nominated than to win. When you force the town to up your fee because you’ve won an Oscar, the expectation is, the next project better be great, or we’re being taken advantage of. You’re setting yourself up for failure.”