When the nominees were announced for this year’s makeup and hairstyling Oscar contenders, there was a surprise: Alongside box-office tentpoles Star Trek Beyond and Suicide Squad, there was an unassuming Swedish film, A Man Called Ove, which, as it happens, also earned a nomination in the foreign-language film category.

But maybe it shouldn’t have been so surprising, for it’s the second consecutive year that Ove‘s makeup and hairstyling nominees, Eva Von Bahr and Love Larson, found themselves nominated alongside two high-profile films. A year ago, their work on The 100-Year-Old Man Who Climbed Out the Window and Disappeared was nominated alongside Mad Max: Fury Road (the eventual winner) and The Revenant.

Director Hannes Holm’s film follows the emotional transformation of a grumpy widower named Ove, played by Rolf Lassgard, who was 59 when the film was shot. But despite the fact that his character also is 59, the actor’s relative youthfulness just didn’t fit the role. “Rolf looks much younger,” explains Von Bahr, “and you don’t get that grumpy-old-man feeling.”

So the makeup artists chose to create a silicone prosthetic to age their actor by covering his hair. Von Bahr personally “punched” the hair into the prosthetics employed, a laborious process since it involved single-use prosthetics — meaning a new one was used for each day of the 30-day shoot. Using a prosthetic wasn’t part of the original plan, but because the actor had another acting commitment, shaving his head wasn’t an option.

As a result, Lassgard spent two and a half hours each day being transformed into his character.

“It also is complicated to do a prosthetic where half the actor’s skin is his own and the rest is silicone, since Rolf’s face could turn red while the silicone didn’t,” adds Larson. “It would have been so much easier to paint Rolf the same color as the prosthetic because then we would have been safe. But since we wanted everything as natural-looking as possible, we matched the prosthetic to Rolf’s own skin.” 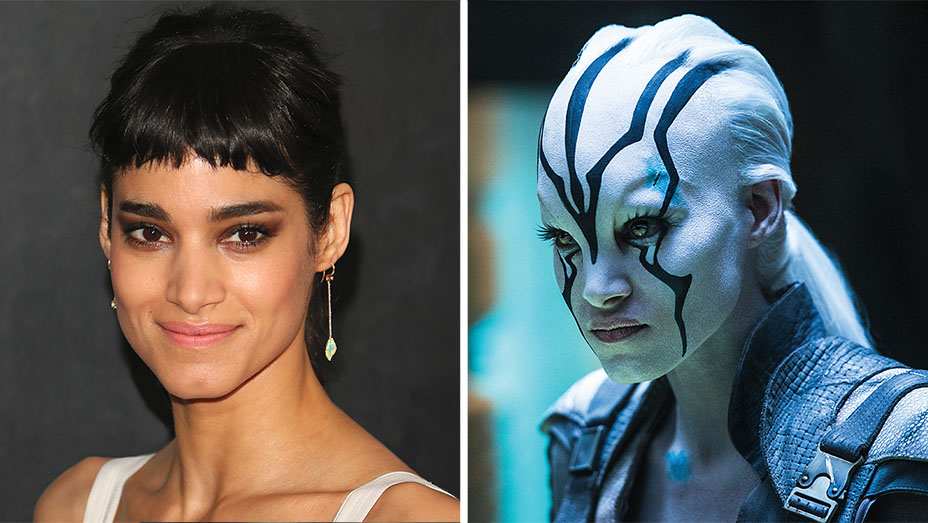 Out of the 56 individual, complex prosthetic makeup characters that Harlow (who won a hair/makeup Oscar in 2010 for the first Star Trek reboot), Alonzo and their team created for Star Trek Beyond, they most enjoyed transforming Sofia Boutella (Kingsman) into alien scavenger Jaylah. The process took two and a half to three hours every morning. “Jaylah was a favorite because of the precision and beauty that Alonzo brought to her on a daily basis. Keeping her clean through fighting and atmosphere was no easy task,” Harlow says. “That makeup, however, wouldn’t be a character without the performance of Sophia to bring it to life, which she did with incredible skill.” The process started months before the team even met the actress. In consultation with the film’s director, Justin Lin, they tested four variations of their design on a body double to see them in the three-dimensional world. Once they settled on a design, they built molds in silicone based on Boutella’s facial structure. Then the hair team stepped in, creating a prosthetic forehead that would be applied to Boutella’s head after it had been covered with a bald cap. “This prosthetic had a subtle raised demarcation,” Harlow continues. “Once the prosthetic was applied, we painted it. The color palette, though appearing white, is actually five separate colors. This creates a realistic skin impression, as opposed to just a flat white color, which would have read as clown-like. After this pass, the black line work on her face was done, painstakingly carefully, since any overlap of black onto the ‘white’ skin would be impossible to paint over.” After Boutella’s prosthetics were in place, then eyelashes, eye makeup, contact lenses, dentures and a wig were applied and installed, completing the transformation. 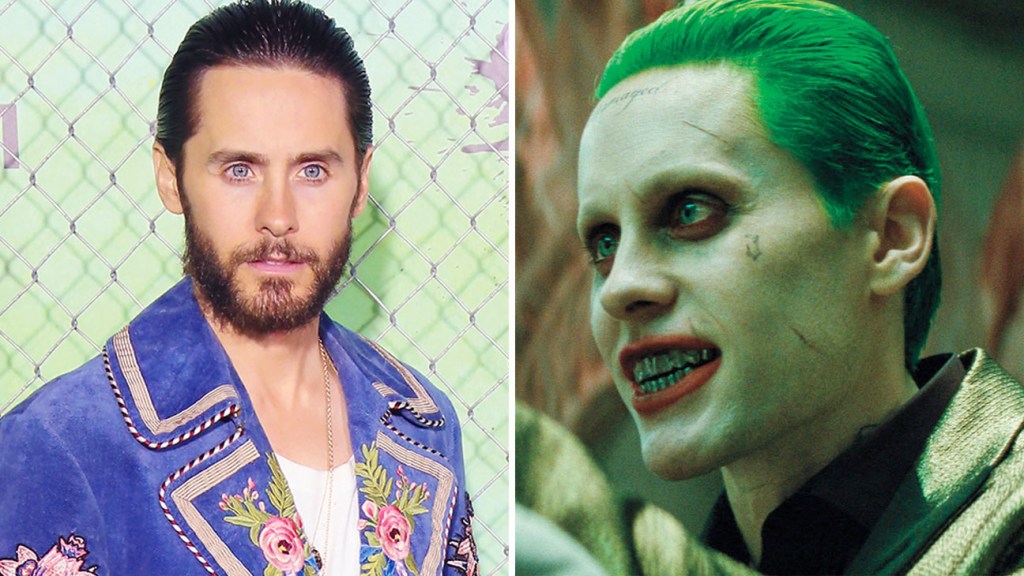 Speaking on behalf of the first-time Oscar-nominated hair/makeup team from Suicide Squad, makeup effects artist Bertolazzi says that re-creating the Joker (Jared Leto) was one of the biggest challenges, mainly because he’s a character audiences have seen in so many iterations on film and in TV. “There have been many previous, amazing Jokers,” Bertolazzi says. “There were great expectations from everyone, so I was a little nervous. The makeup has many layers — veins, bruises, scars, so much of everything. It was like a copy of a Francis Bacon painting, but really exciting to create.”

A version of this story first appeared in a February standalone issue of The Hollywood Reporter magazine. To receive the magazine, click here to subscribe.