La La Land, which arrives at Sunday night’s Oscar ceremony with 14 nominations, proudly pays homage to the classic movie musicals of the genre’s golden age. It’s hard to watch Damien Chazelle’s jazzy work without hearkening back to the films of Fred Astaire, Ginger Rogers and Gene Kelly. But La La Land differs from its ancestors in one notable way: It contains fewer instances of characters singing songs than most musicals in history.

Using the soundtrack listing, and disregarding reprises and instrumental-only songs, La La Land has just six unique numbers: “Another Day of Sun,” “Someone in the Crowd,” “A Lovely Night,” “City of Stars,” “Start a Fire” and “Audition (The Fools Who Dream).”

By way of comparison, the only post-1968 musical to win best picture, 2002’s Chicago, had 12 songs with lyrics, from “All That Jazz” at the top of the film to “I Move On” during the credits. Here are all 10 musicals to win best picture, along with La La Land on the far right. The higher the image on the chart, the more songs a film had:

In total, 43 musicals have been nominated for best picture, from a pair in 1929 — The Broadway Melody and Hollywood Revue — to one this year. The distribution of their song counts follows, with best picture-winning films marked in green and films that did not win marked in red. 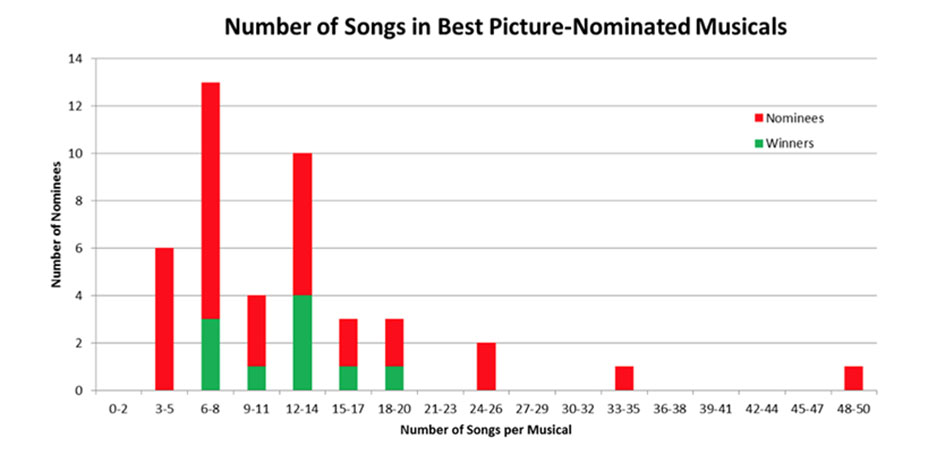 At the far left, those six losing nominees with three to five songs are all from the pre-1940 era. Since 1956, out of 20 best picture-nominated musicals, only two had fewer than eight unique songs: 1991’s Beauty and the Beast and 2016’s La La Land, each with six.

In fairness, defining this dataset is admittedly a bit subjective. I went through all 43 of these musicals one song at a time, judging which songs were distinct (are “Follow the Yellow Brick Road” and “We’re Off to See the Wizard” from The Wizard of Oz one song or two?), which songs are reprises (is “Tonight Quintet” sufficiently different from “Tonight” in West Side Story?) and what even counts as a song (should we count the “Overture & Preludium” at the start of The Sound of Music, which is mostly instrumental but contains a small segment of Latin lyrics?).

For Moulin Rouge!, a jukebox musical that’s quite different from the other 42 on this list, there were so many ambiguities that I chose to watch the entire film with a stopwatch in hand (piecing apart the “Elephant Love Medley” was particularly fun).

Why the stopwatch? I also decided to take a look at song runtimes. That is, how much time do each of these movie musicals spend on lyric-based songs? It turns out that, once again, La La Land is at the extreme low end of the spectrum. The entire film had a 132-minute runtime, but only 23 minutes and 23 seconds were devoted to singing, or 18% of the movie. Looking at the 25 best picture-nominated musicals since 1940, that’s the second-lowest mark: 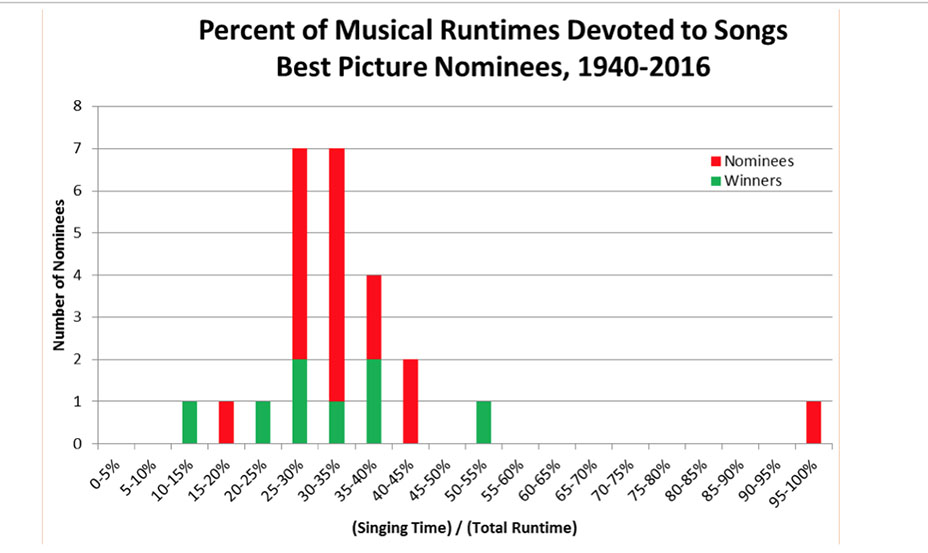 The bar on the far right, once again, belongs to Les Miserables, which is entirely in song.

Only 1944’s Oscar champion Going My Way, just 14 percent in song (the green bar at the far left), had a smaller percentage than La La Land (the short red bar on the left). Even if I had elected to include more of La La Land (specifically, the two 1980s hits sung at the pool party: “Take on Me” and “I Ran”), it still would be second-lowest, not catching up to the 1951 best picture, An American in Paris, which sits at 24 percent.

Speaking of that Gershwin classic, none of this is intended as a criticism of musicals like An American in Paris or its modern derivative, La La Land. The former features some of the greatest ballet ever captured on film, while the latter is a gorgeous tribute to the power of jazz. Adding in unnecessary lyrics to either ballet or jazz, two mediums which are often used to tell stories without words, would cheapen the experience for the audience. We should never confuse quantity of songs with quality of music.

Difficult as it is to define the dividing line between musical and non-musical, it turns out the Academy has tried to do just that. Unbeknownst to some casual Oscar fans, there technically is a category on the books for best original musical. It was awarded from 1941-1956, 1958-1979, and 1982-1984. The last recipient was Prince’s Purple Rain. However, the Academy reserves the right to exclude this category if there are not enough worthy musicals in a given year, a right it has exercised each of the past 32 years.

The rules of that hidden category state that a musical must have at least five songs, so La La Land would have made the cut with six. That may be fewer than any previous best picture winning musical, but it’s unlikely this hurts the film’s chances of claiming the year’s top prize. We’ve come a long way since the days of The Hollywood Revue of 1929 (the film debut of “Singin’ in the Rain”), and musicals are now far more than just a series of songs loosely strewn together with a thin plot. It’s everything around the music, in addition to the song-and-dance numbers, that might just put La La Land over the top.

Ben Zauzmer (@BensOscarMath) uses math to predict and write about the Oscars for The Hollywood Reporter. He recently graduated from Harvard with a degree in applied math, and he now works as a baseball analyst for the Los Angeles Dodgers.