Fred Berger and producer Jordan Horowitz believed in Damien Chazelle’s vision and talent long before the director made the 2014 Sundance breakout Whiplash. Back in 2011, Chazelle was just a New York transplant with Hollywood hopes of creating a modern musical with original music — a commercially risky proposition that seemed overly ambitious for a young director with only one movie (2009’s Guy and Madeline on a Park Bench) under his belt. But Berger, Horowitz and fellow producers Marc Platt and Gary Gilbert stuck with Chazelle and his dream, which eventually became La La Land, starring Emma Stone as aspiring actress Mia and Ryan Gosling as jazz musician Sebastian, and nabbed a record-tying 14 Oscar nominations. Berger, 35, spoke to THR about crane malfunctions, the pact he made to protect the film’s story and the rewards of jumping off a cliff.

When did you know that this film actually was going to get made?

This movie has been a six-year ride with really low lows and bleak points along the way. We were sure it would never get made, and then there were other times when we were off to the races. There were two tipping-point moments: One was when we got the green light from Lionsgate saying, “Congratulations, you’re making this film.” But that was with the previous cast [Emma Watson and Miles Teller]. Then timing issues happened and we lost the leads, and we went back to being a film that was never going to happen because the list of actors who have that type of chemistry — that old movie-star quality who sing and dance and also justify getting a movie like this made — was very short. When Emma and Ryan came on, that was more exciting than I can describe because they were our dream duo from the beginning. We were suddenly making it with our dream crew, our dream cast, all in L.A. Every day after that was the most challenging shoot — but also the most joyous production I think any of us have ever worked on.

What was the toughest day on set?

The scenes that terrified us the most were the single-shot, magic-hour dance numbers. So when Ryan and Emma do their duet up at Griffith Park, we had two or three takes that could be viable in that light. The scenes that ended up being the most challenging were the dialogue scenes that had to have almost a set-piece quality to them. If you look at their dinner conversation or the scene outside of her house in Nevada, those had been the source of so much discussion during prep and even during the shooting on exactly how to calibrate them. It was just so cramped, and we tried to put a crane in there — it took hours to build a crane — and then it didn’t work. So that day ended up really being the hardest.

There was pressure along the way to change several parts of the story, including the ending. How did you push back against that?

The moment you meet Damien, you feel two things very strongly: an unbelievable amount of confidence and an immense responsibility to protect that vision because it’s so clear, so powerful. From day one — this was well before Whiplash — we knew he was the real deal and felt very strongly that his vision for the movie, while potentially challenging, should get made. Jordan, Damien and myself made a pact that under no circumstances will [Emma and Ryan’s characters] end up together in the end. He will always play jazz and not a more acceptable form of music; she will always be an actress, this will always be a love letter to L.A. — we’re not relocating to Paris. We felt confident, but the things that people were pressuring us to change were the things that would make it connect and feel original and new. What we were very open to was calibrating it in a way that felt honest. Earlier versions had Ryan’s character in a much worse place — he was driving a Honda and unemployed and broke. So it was Ryan’s idea to want something more concrete than just success as a jazz musician, but actually [to have his own] club. And it was Emma’s idea for her character to do [Sebastian’s club] sign, which gets me in my throat every time I see her with the Seb’s sign. That’s what the ending is about: They’ll always have each other, they needed each other to get to this place, they’re better off for having known each other, and that to me is something that’s really satisfying. 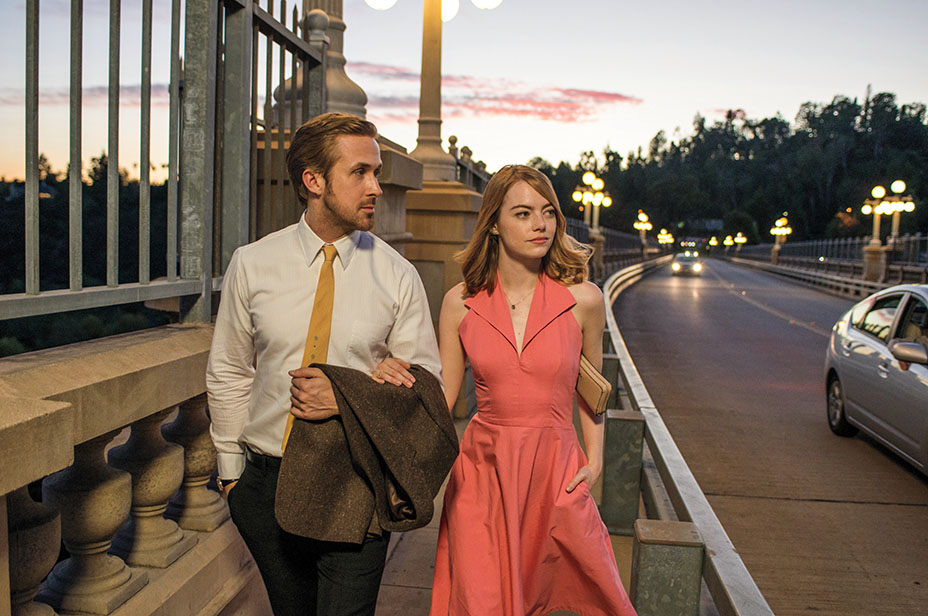 What types of challenges did you face when it came to budget?

It was an interesting thing when you’re an independent producer and most of the boulders you’re pushing are tough to get over the hill — that’s challenging. And then there’s a moment where Whiplash premieres and suddenly the boulder is a piece of gold that everyone wants. And so we had a lot of attention, a lot of suitors and a lot of different ideas of how to get this movie made, which was a different type of battle. When we ultimately partnered with Lionsgate, they had to convince us to take a bit more resources than we were asking for. We never wanted to give up the contours that made it special — which also made it risky — and we never wanted to be in a place to have to give those up to connect with a broader audience.

Besides your film, what’s been your favorite movie this awards season?

I adore Moonlight, and I love Manchester by the Sea and a million other movies. Maybe my favorite this year is Nocturnal Animals; it displays the power of storytelling in a way that’s so bold. It’s Amy Adams playing a character reading a fake book written by another fake character — it’s so damn visceral when you’re in those flashbacks. It speaks to what we do: Somehow you go in a dark room and you feel so compelled and riveted and moved by stories that you know are being played by actors. It honors our craft in a very subtle way.

Has making La La Land changed the type of projects you want to work on in the future?

One easy answer is that I loved the process of making a music-driven movie so much that I’m looking for more projects that involve music — very different stylistically. Just working with [La La Land composer] Justin Hurwitz definitely expanded my desire to make musical movies. And I’ve always been inspired to make movies that maybe feel a bit less obvious and are execution-dependent, which is to say they’re not protected by their concepts, but if you nail them, the sky’s the limit. That’s always been what Damien and I are drawn to. What this movie allows me to do is actually say that much more convincingly to people: “You know what? Trust me. Let’s jump off a cliff and make something that if we miss, we’ll miss big, but if we succeed, it’s not just something that just goes to a festival but could break out in a very big way.”