This year’s Oscar acting hopefuls include a mix of roles based on historical figures, such as Renée Zellweger as Judy Garland in Judy and Cynthia Erivo as Harriet Tubman in Harriet, as well as fictional roles, such as Joaquin Phoenix’s Arthur Fleck in Joker. As they vie for the statuettes, it begs the question: Does one group have an advantage over the other?

Before going through all 1,708 acting nominees over 91 years in four categories (lead and supporting actor and actress) and using historical data to calculate the answer, I laid out the following criteria for what constitutes a real-life person versus a fictional character:

1. A historical figure is any character based on a real-life person. That includes not only famous people — like Ben Kingsley’s Oscar-winning portrayal of Mahatma Gandhi in Gandhi (1982) or Greer Garson’s Oscar-nominated performance as Marie Curie in Madame Curie (1943) — but also lesser-known individuals: Albert Finney as Edward Masry in Erin Brockovich (2000) and Lupita Nyong’o as Patsey in 12 Years a Slave (2013).

2. Historical figures also include characters based on real people whose names or details were changed. There was never a governor of Louisiana named Willie Stark, but it’s widely known that the fictional politician played by Oscar winner Broderick Crawford in All the King’s Men (1949) was based on real-life Gov. Huey Long. I drew the line at composite characters, which I count as fictional.

Although best supporting actress is the least likely of the four acting categories to have a nominee based on a real person, it also played host to the longest streak of consecutive winning historical roles. From 1998 to 2002, all five winners played actual people: Judi Dench as Queen Elizabeth I in Shakespeare in Love (1998); Angelina Jolie as sociopath Lisa Rowe in Girl, Interrupted (1999); Marcia Gay Harden as painter Lee Krasner in Pollock (2000); Jennifer Connelly as mathematician John Nash’s wife, Alicia, in A Beautiful Mind (2001); and Catherine Zeta-Jones as murderer Velma Kelly, based on nightclub singer Belva Gaertner, in Chicago (2002).

The longest streak for fictional champions in one category is 15 years, thanks to a 1961 to 1975 run in best supporting actor in which every winner — from George Chakiris as a gang leader in West Side Story (1961) to George Burns as an aging comic in The Sunshine Boys (1975) — played a made-up character.

In the 91-year history of the Oscars, there were 28 nonconsecutive years in which no acting winner played a real-life character. In only one year — 2002 — did all four winners portray real-life individuals: Adrien Brody as Holocaust survivor Wladyslaw Szpilman in The Pianist, Nicole Kidman as author Virginia Woolf in The Hours, Chris Cooper as poacher John Laroche in Adaptation and Zeta-Jones’ Velma Kelly in Chicago.

The fact that this didn’t occur until 2002 isn’t too surprising, given that the Oscars have witnessed a marked increase in the frequency of historical nominees.

The black curve in the chart shows the trend here, which is rising over the decades. The only two Oscar ceremonies where more than half of all acting nominees were nonfiction occurred quite recently, in 2013 and 2015, at 60 percent (those two points in the top right of the graph).

Across all years, 96 historical roles have gone on to win Oscars. But if we examine the number of historical nominees by year and assume that every nominee has an equal chance of winning, the data predicts that only 85.9 winners would be portraying real-life characters. Those extra 10.1 trophies suggest a real advantage to playing an actual person.

So, for all you actors: Many considerations go into choosing which role is most likely to win you that Oscar. But all else being equal, choosing a role modeled on a historical figure is a bit more likely to put your performance in the Oscar history books. 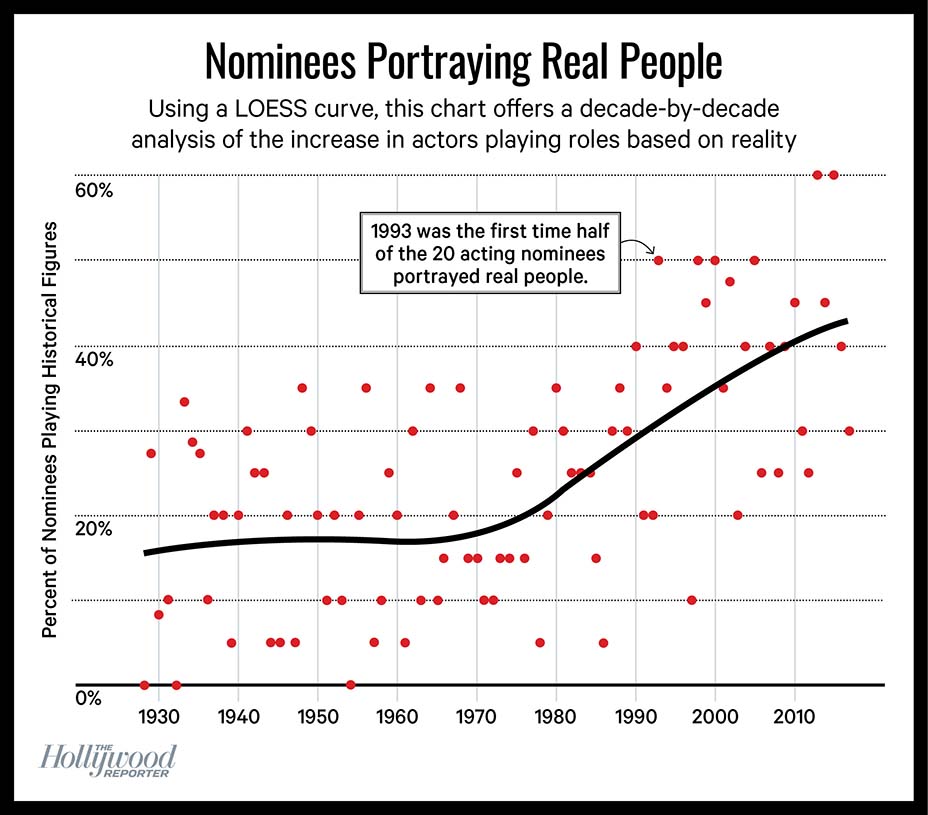 Ben Zauzmer is the author of the new book Oscarmetrics, from which this is adapted.