Happy End, the latest film from Austrian director Michael Haneke is, in many ways, exactly what we’ve come to expect from the 75-year-old auteur who has made a career out of upsetting and infuriating his audience.

Austria’s entry for the 2018 foreign-language Oscar is in some ways the ultimate Haneke movie. The story of the misanthropic Laurent family, once-wealthy industrialists living in Calais whose construction business has fallen on hard times, touches on themes — inter-generational revenge, the distorting impact of technology on relationships, Europe’s treatment of immigrants and the dispossessed — that haunted the director’s earlier work, from 1992’s Benny’s Video to 2005’s Cache and his 2013 Oscar winner Amour.

Amour leads Isabelle Huppert and Jean-Louis Trintignant return alongside Mathieu Kassovitz, Franz Rogowski and the 12-year-old Fantine Harduin in the French-language drama, which had its debut at the Cannes Film Festival in May.

What’s new, for Haneke, is the humor. Happy End actually delivers some laughs, albeit of the awkward, uncomfortable variety.

Haneke spoke to The Hollywood Reporter about discovering his funny side, why he feels Europe hasn’t earned the right to tragedy and why, despite the despairing message of his movies, he hasn’t given up hope.

Happy End has to be the first time I can remember laughing during a Michael Haneke film.

Well, I see the film as a farce. It’s a heightened reality. Because I think the subject matter — the fate of this well-to-do European family — doesn’t deserve a serious approach. I think the stories of our little fears and hardships are more suitable to farce than a tragedy. The movie is about our own autism, our own self-centeredness, our cold-hardheartedness toward others. That’s pitiful, but it’s not tragic. 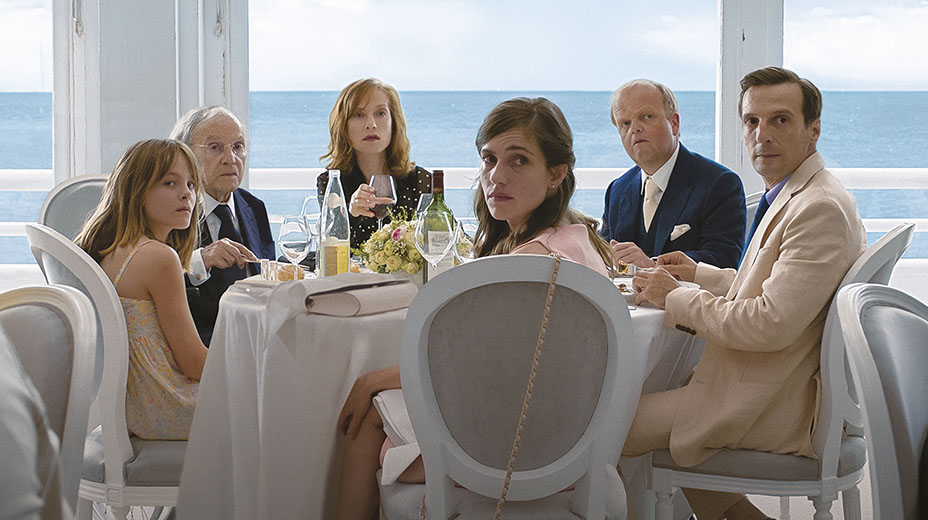 Why do you see it that way? On the surface the issues — a dysfunctional family, the plight of refugees in Europe — seem pretty tragic.

But the perspective is absurd — all the petty fears of these people who are just dancing around the golden calf. We (in the West) don’t seem to care if the world lies in ruin as long as we’re still doing fine. That’s the real theme of the film: our ignorance toward the other. It starts in the family: the ignorance between members of the same family. Then within business life. Then it continues with ignorance towards foreigners and the others outside. They are all different aspects of the same thing. And this cold-heartedness is a bourgeois, a middle-class, phenomenon. We’re all middle class now, all petit-bourgeois. What used to be called the “educated bourgeois” no longer exists. There are just richer and poorer forms of the petit-bourgeois. (The Laurent family) are a bit richer, but they are on the way to becoming poorer. And they will do anything to do prevent that.

What can you do in comedy that you can’t do in tragedy?

I don’t know. When I thought up the story, I just thought comedy was the proper form to tell it. It doesn’t mean I’m only going to do farces from now on. But with every new film, I try to do something different, to set a different formal challenge. This time it was farce.

You seem to be revisiting themes and settings from previous movies, particularly with Jean-Louis Trintignant’s character, who is remarkably similar to his figure from Amour.

That’s the only direct reference. The old man who has killed his wife because he couldn’t stand watching her degenerate before his eyes. That’s a continuation of the story of Amour. I did that because Amour had an ending that was more metaphoric and symbolic and I wanted to try out a more realistic ending. What is it like when you kill someone you’ve loved? That interested me and so I picked it up again. As to the other references people see to my previous films, I can only say that wasn’t my intention. Of course it is the same brain making all these movies. They say a writer always writes the same book. And a film writer always writes the same script. I can only write what I know.

Can I ask about the title: is Happy End a reference to Samuel Beckett’s Happy Days? The ending of the film seems to echo that.

People have told me that but that wasn’t my intention. It was more the connection to Funny Games. The games in that film were just as funny as the ending here is happy. It was a bit of a wink on my part. But I don’t think the title is just ironic. Because the characters in the film actually are happy to be heading toward their end.

The film is set in Calais, but the refugees — who in news reports on Calais are always front-and-center — are here pushed to the margins. We barely notice them.

Yes, because I think I can’t do a film about migrants. I’ve never lived with migrants and I’ve never experienced their situation. Those kinds of films that take a subject and then construct a film around them — I don’t like those. I only want to make movies about what I know. I know, I live, this middle-class situation, where the migrants are only on the margins. You don’t really encounter them. At best, you donate money to an institution to assuage your guilty conscience.

The thing about much of the media coverage of refugees (in Europe) is that, at their worst, those reports feed the fears that populists can capitalize on. All of Europe is lurching to the right. It’s a very unpleasant phenomenon. It’s already happened in America: You don’t have the refugees in the same manner but the fact that you have the president you have has to do with this same kind of ignorance.

Is the Laurent family a stand-in for Fortress Europe, defending its material privilege even as refugees starve?

You can interpret it however you like. I don’t like to give a users’ manual for my films. Every viewer should figure out the film for themselves.

Are you ever surprised at how your films are received?

Sure, sometimes I’m surprised that people see things in the films I didn’t put there. But that’s a good thing. I try to make my movies so the audience has a lot of different possibilities of interpretation. Because that’s what real life is like. It’s contradictory and never unambiguous. Only bad films are unambiguous. I try to tell the stories the way life tells them, namely conflicting and contradictory. Reality is always irritating. And that’s what I try to bring to my films.

There are dozens of dissertations and academic papers on me and my work and I always read the first few pages and then I put them aside because they are always writing about some other film, not about mine. I never recognize my own films in those papers. But that’s fine, that’s part of it.

But you like it when a viewer leaves one of your film irritated?

Yes, that’s good. Irritation is productive. It gets you thinking.

Do you have any hope for humanity?

The Writers: Michael Haneke on 'Downfall'