Based on Saroo Brierley’s memoir A Long Way Home, first-time director Garth Davis’ Lion follows the journey of a man (Dev Patel) trying to find his birth mother in India 20-plus years after getting lost at a train station there and being adopted by a family in Tasmania.

To get the film made, 37-year-old Englishman Iain Canning and his See-Saw Films partner, Emile Sherman — both are nominated with Angie Fielder — embarked on their own epic odyssey: It began in Park City, Utah, and will end at the Dolby Theatre in Hollywood, after stops in Kolkata, India; Sydney; Hobart, Tasmania; and Toronto, where the film premiered at the Toronto Film Festival. Canning spoke with THR about putting Patel through the wringer and commandeering Kolkata’s busiest bridge.

How did you secure the rights to Brierley’s book?

Emile and I were at Sundance screening Top of the Lake, Jane Campion’s TV series. Garth [Davis] had directed three episodes of the series, so we were talking to him, desperate to produce his first feature and find a project that would suit his talent. We started to become aware, from afar, of all this interest in Australia for Saroo’s story and for his soon-to-be-finished memoir. So Emile, who is normally Sydney-based but was in Utah, looked at me and said, “I’m in the wrong place.” He needed to get back to Sydney and meet with the rights holders and with Saroo and his family to pitch us as being the best possible home for the project. So he hotfooted it back to Sydney.

What were budget negotiations like with a project to be filmed on location in India, Australia and Tasmania?

We thought, “My God, no one’s going to want to finance this film. There’s an hour in a non-English language. And the first hour or so is all about a 5-year-old boy.” We were pretty locked into a very particular budget because we knew we needed to shoot, weatherwise, during a particular time in India. It’s a more well-trod process for us shooting in Australia and Tasmania, and shooting in India was a whole new experience. So we went out and financed the film before we had any actors involved. Luckily, we were able to make the film for that money and also make the money work across Australia and India.

Dev Patel has spoken a lot about the extensive audition process he went through in order to land the part of Saroo.

[Garth] was very democratic, which is rare in film. And in a way, I’m sure, that was very complicated to Dev. We were very concerned about how we were going to get [Lion] made, and when there was so much interest in the project, we were able to have absolute freedom on whom we cast. There was no pressure on us to cast anyone with a profile, so there were a lot of people taped for the role of Saroo. We didn’t want to just cast Dev Patel because he had the profile; we wanted Dev Patel to be the best person to play the role. And so he did go through this process like everybody else. And he was open to that because he so desperately wanted to prove himself to Garth.

Were there any particularly hard days on set?

Clearing one of the most significant bridges in Kolkata and having your 5-year-old [star] in that space was one. It is such an important place for Indian life, so it was kind of extraordinary. In India, we had an incredible production services company. They’ve done Slumdog Millionaire and the Marvel films. They were able to pull off this miracle, which was to give us four hours on one of the main bridges in one of the biggest cities in India to be able to play out our scene. Another big challenge is organizing — this is the most boring story — all of those trains. But it was organizing all of those trains to do exactly what we needed them to in order to create that dynamic of Sunny [Pawar, who plays the young Saroo] being trapped. In most countries, you would get a flat-out “no.” There wouldn’t be a supportive framework in order to be able to help you get all of that stuff to work. India, the same place where [Lion‘s] incredible story actually happened, ended up being the only place we’d be able to physically do the story. 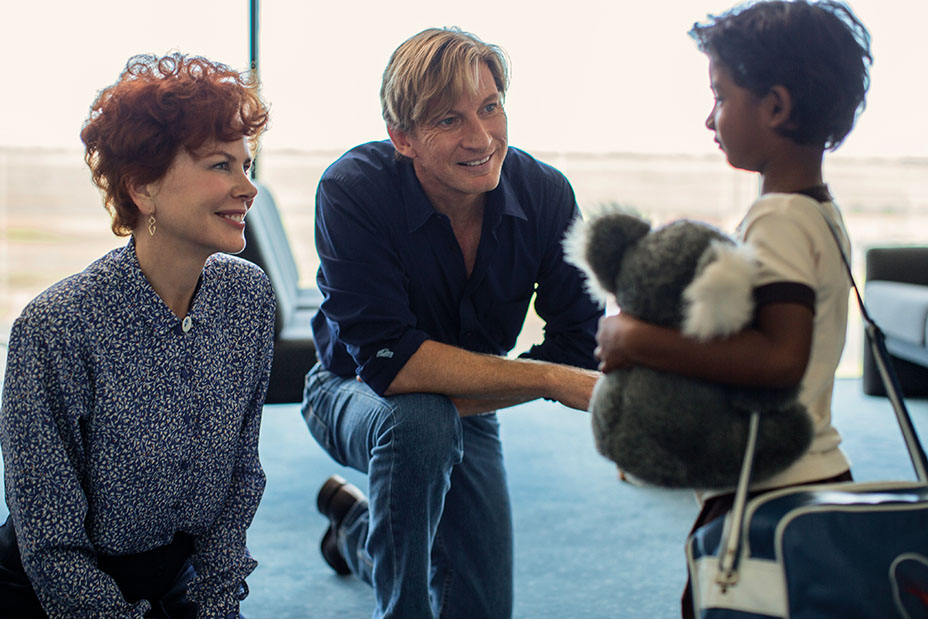 Were there any tough decisions you had to make as a producer?

There was a section of the film that, in the end, we didn’t have the running length for. We wanted to spend a little more time with the family in Tasmania when Saroo first gets there as a small child, as a 5-year-old. [Saroo’s adoptive mother] Sue Brierley [played by Nicole Kidman] had put up a map of India in his bedroom, and she would point to India and say, “This is where you’re from, and this is where you’ve traveled to,” so Saroo would have that link visually to where he was born. There were lovely moments that unfortunately, due to the running time, we couldn’t include. We had to pick some and say goodbye to others. But there were other challenges. Because this was based on a true story, one of the biggest emotional challenges was screening it for the family once we finished the cut. Them falling in love with it was in some ways our greatest test. They’ve been so supportive of this film.

What other movie has been your favorite this awards season?

I found Ava DuVernay’s 13th really striking and incredibly powerful. I felt that it in some ways just pulled together so much information that was already in the back of our minds but reminded us that it should be at the front. It painted a picture of where we are now. Having worked with Colin [Firth] on The King’s Speech, I thought the film he produced, Loving, was very special.

How does this awards season with Lion differ from your experience with The King’s Speech?