“Owen Wilson is doing great, thanks.”

That’s the cover line from Esquire’s September issue, which features an in-depth profile of the popular yet press-shy actor who, for years, has not sat for such a revealing magazine piece. Written by Ryan D’Agostino with photographs by Mark Seliger and styling by Bill Mullen, the story follows Wilson over three separate interviews during which he opens up on his life and career as well as a role as a father.

The feature arrives at a busy time for the 52-year-old. He charmed fans and critics with a role on this summer’s Disney+ series Loki. He recently traveled to the Cannes Film Festival for the world premiere of Fox Searchlight’s The French Dispatch (in theaters Oct. 22) and is prepping for the Valentine’s Day bow of his collaboration with Jennifer Lopez, Marry Me. The Hollywood Reporter got an early preview of the Esquire cover story, and there are highlights below.

The actor turned heads in a well-received turn as Mobius on the Disney+ series Loki opposite Tom Hiddleston. When D’Agostino asked him about “the smart, fun Marvel series,” Wilson took the chance to correct some misinformation. “We did a press junket for that yesterday. They asked me a lot about — ‘It sounds like you had to be convinced to do this.’ I don’t know where they’re getting that. That isn’t true. The director just called me and told me the idea, and I wanted to work on it. But somehow what seems to be in their press notes, maybe, is that I know zero about the MCU. I don’t know a ton about it, but I know … actually, yeah, I probably don’t know that much about it. I kind of know about Iron Man. I’ve seen Aquaman. He’s swimming in jeans. No one can swim in jeans! That was my argument with the kids about Aquaman.” [Aquaman is part of the DC Universe.]

His Brother Andrew Supported Him After a 2007 Suicide Attempt

Wilson, who has battled depression, tells the magazine that the concept of death “landed with me when I was about eleven.” He recalled a conversation he had with his father, a TV executive, about it when he was young. “I remember exactly where in the house — saying, ‘I worry about dying,’ and seeing my dad turn away and catch himself. And I was surprised to see that reaction. But who knows, maybe that was part of why I said it.”

The revelation carries extra weight considering Wilson had his own brush with death during a 2007 suicide attempt, which he has declined to speak about publicly. D’Agostino writes that Wilson does not choose to do that for this story, but he did say that after the experience, his brother Andrew came to stay at his house to provide support by helping him with schedules for each day as a tool for recovery.

He Got Booted From Private School

Due to “various incidents of prankery, wisecracking, and charming but irritating insubordination,” Wilson was expelled from private school. He then enrolled in a New Mexico military school based on a recommendation from his brother Andrew. Says famous brother Luke Wilson: “After he’d been expelled from our high school and he went to New Mexico Military Institute, my dad and I went to visit him. It’s just barren desert and this fortress out there, and to me it seemed like The Lords of Discipline. But then seeing Owen out there — buzz cut, uniform, his room and his locker, and how they had to walk in straight lines — he embraced all that. The last thing you’d think he would have taken to.”

Wilson confides that while he and Wes Anderson were writing The Royal Tenenbaums — the 2001 film that landed them an Oscar nomination for best original screenplay — they went so far as to dream up a restaurant called Sloppy Huck’s, a favored hang for Gene Hackman’s character and his kids, that never made it into the finished film. “It was this place with peanut shells on the floor and an odd menu with stuff like rhubarb pie and corn-fritter casserole,” he tells the mag. “There were those jukeboxes at each booth, right on the table, that you could flip through. And bullet holes in the window, because bad guys had tried to rob the cash register a couple of times, so Sloppy was always alert.”

Wilson Is Adored by Famous Friends

Anderson, a longtime friend and collaborator with whom he reteams on French Dispatch, praised Wilson’s mind, saying, “He’s deceptively intelligent and sometimes even hides his intelligence and how well-read he is.” He added: “People are drawn to him. If kids were picking teams, he might be good at whatever the sport is, but I think he’d be picked even quicker than his talent at the sport would suggest, just because people want him on their team.”

Marley & Me co-star Jennifer Aniston called him “disarming,” and said that during their time shooting the hit film, “Owen and I volleyed back and forth really well together. I remember laughing a lot, and I love nothing more than someone who can make me laugh. It’s the key to my heart.” His most frequent collaborator, Ben Stiller, said that despite their many projects together (14 in total), “He lives this life that’s kind of mysterious in a way. I find it mysterious. I don’t think you could ever fully know him.”

Wilson Opens Up About Being a Father

The article states that his sons are ages 10 and 7, children he shares with two different former partners, both of whom, the article notes, he is on good terms with. He shares custody and spends time with them at sporting events and telling tales. Like this one: “’Sometimes telling the stories at night, you do take a little pride that these guys are into this story! One of them even said, “Dad, you should do something with this. This is a really good story!” It was about this little pack of boys in a post-apocalyptic world, and there’s a pack of dogs — I play to my audience. There was a moment in the story where the girl that the one boy likes, he sees her with another boy, and he thinks they’re holding hands’ — he’s speaking slowly now, and in his distinct accent the word hands is hee-yands — ‘but they’re just playing that game, you know that game? You hold your palms out face up, and the other person puts their palms on yours, and you have to slap the top hand really fast. And the kid sees that from afar and thinks they’re holding hands, but it’s actually the game. So sometimes, little things like that, you think, “That’s a pretty good little element for a story. A good little detail.”‘”

Maybe it’s the work or the way his family life has sorted itself out, but it’s got Wilson feeling sunny. “I’ve been in sort of a lucky place of feeling pretty appreciative of things,” Wilson tells D’Agostino. “I know everything’s kind of up and down, but when you get on one of these waves, you’ve gotta ride it as long as you can. … Feeling pretty grateful. Well, grateful’s one of those words that get used all the time. Appreciative. Of, you know, stuff.” 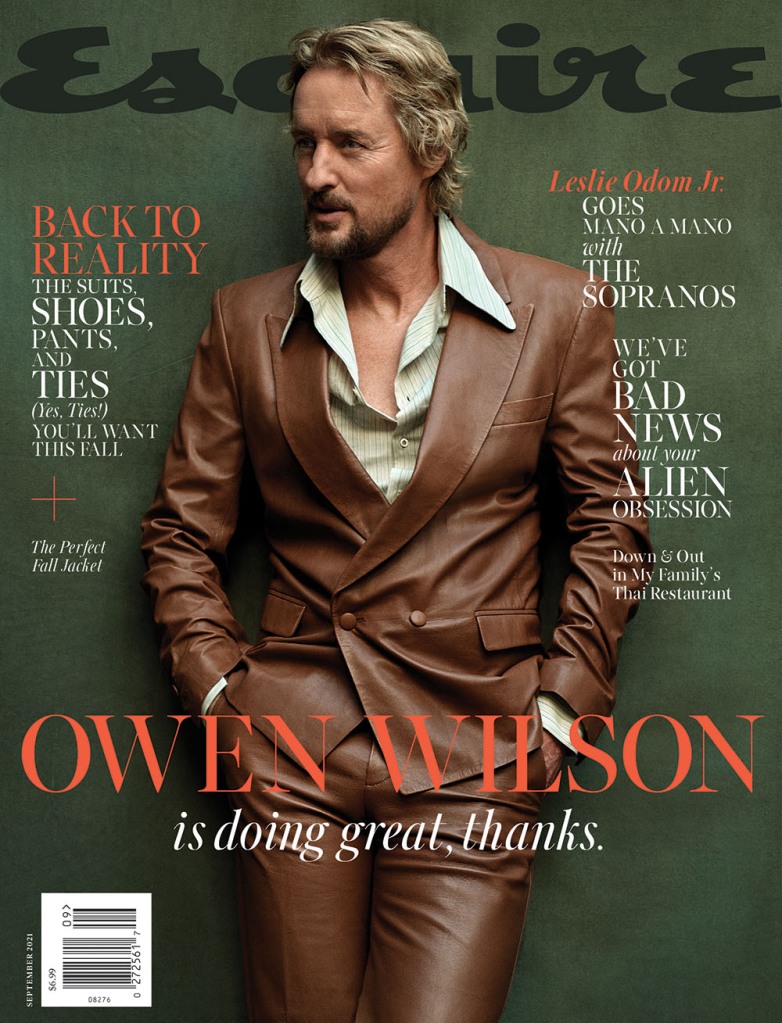 The full Esquire cover story can be found here.