Pacific Rim: Uprising is a movie full of father-son baggage.

While Boyega fleshes out Jake by channeling Elba’s lionhearted spirit as occasion demands, Eastwood fleshes out Nate simply by being his father’s kid. He lacks Boyega’s easy charisma, but makes up for it with family resemblance; maybe he doesn’t mean to, or maybe he can’t help it, but his every line read in the film, his every expression, echoes of his father’s grizzled, tough guy swagger, which is guaranteed entertainment for anyone with an abiding love of Clint’s work. (If you didn’t know Scott is an Eastwood going into Pacific Rim Uprising, you’d figure it out pretty quickly.)

The father-son dynamics Boyega and Eastwood work through here are the most interesting elements of Steven S. DeKnight’s sequel to the 2013 Guillermo del Toro original. As Jake, Boyega has to balance his best qualities as an actor — his charming roguishness, his smartass sense of humor and his irrepressible goodness — with a low-key impression of Elba, one of the best actors working today. That impression has to fly under the radar to work; direct imitation would be too on-the-nose and undercut Jake’s arc. But as roles go, playing Elba’s kid in a big dumb blockbuster about giant robots fighting giant monsters sounds inviting. It’s not that Boyega has an easier job than Eastwood (He doesn’t. Boyega has significantly more screen time and also produces the film), but the pressure on Boyega’s performance isn’t personal in the same way.

No actor likes being pigeonholed or typecast. No actor with a famous parent wants to be repeatedly compared to them. 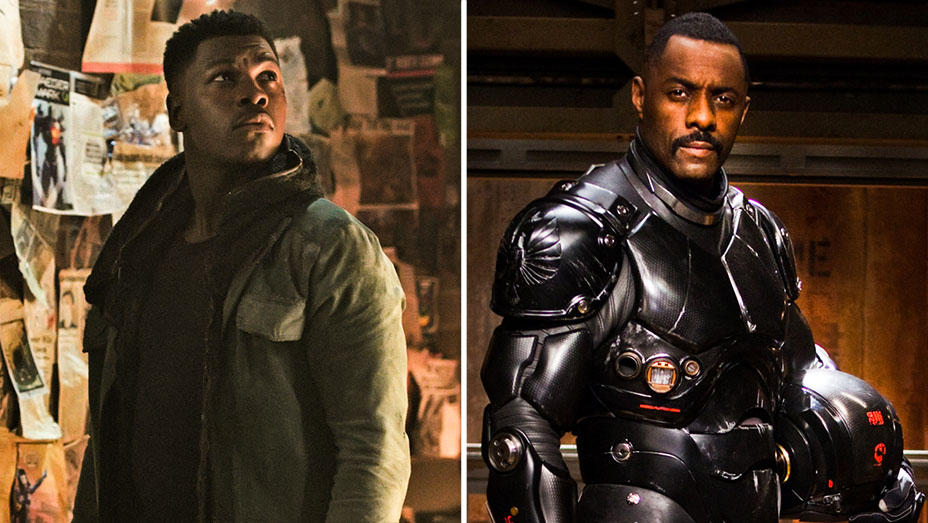 For most actors, a comparison to Clint in terms of performance in an action film would be flattering. This is Preacher we’re talking about here, Harry Callahan, the Man with No Name, Josey Wales, Will Munny; Clint is an all-timer in the Macho Movie Hall of Fame, a guy whose one-liners are as dangerous as the bullets lobbed from his revolver. There aren’t many leading men who can destabilize your security in your masculinity in just five words.

So take that into consideration and think about the burden of legacy resting on the junior Eastwood’s shoulders, playing a character concerned with others’ legacies rather than his own.

Nate and Jake don’t especially get along, not at first; Nate’s still grouchy that Jake left the Pan Pacific Defense Corps, and they spend the bulk of Pacific Rim Uprising trying to tolerate each other instead of repairing the rift between them (which is pretty typical as chafed male relationships go). Eventually the rift is healed and they learn to work together and kick Kaiju butt once again. Until that point, though, Nate invokes Jake’s heritage and laments what he sees as Jake’s wasted potential, sire-shaming him for abandoning his surrogate Jaeger pilot family and for falling short of his name.

It’s hard to imagine Eastwood, who entered another action franchise with last year’s Fate of the Furious, rasping his lines without thinking about how legacy applies to his own budding career. Asking anybody to play the same kind of character their parents are well known for playing seems an awful lot like asking a cat to swim a river. It’s not that they’re ill-suited to it, but they’d rather not if at all possible. Consider, say, Domhnall Gleeson, the eldest of the great Brendan Gleeson’s four sons, who nearly opted out of acting in favor of the opposite side of the camera. The pair appeared together in Calvary in 2014, a film about a priest under threat of death from an unknown parishioner, Brendan playing a priest called Father James, Domhnall playing a cannibal serial killer James visits in prison. Speaking to The Irish Independent, Domhnall described the scene as “a real battle with my dad, a proper battle,” noting that “You’ve got to step up to stand with him.” Being a child of a decorated thespian means taking the stairs two at a time to step out of their shadow.

Grant that we’re talking about a completely different setup than Pacific Rim: Uprising, where Eastwood doesn’t have to worry about sharing the screen with his dad. Grant also that he has the Eastwood name to worry about, and the unavoidable Eastwood looks and ticks to go with it; even the way his jaw clenches when he speaks conjures up images of Clint in his prime, talking down anyone fool enough to get in his way. It’s not like he’s unaware of his background, or unwilling to talk about it, and it’s not as if the media doesn’t press him on the matter of birthright, either. In an interview with Collider, for instance, Scott talked about watching his dad’s films without seeing him as “dad.” Whether he sees his dad when he watches his own films is another question entirely.

What’s less questionable is how Eastwood’s real-life legacy quietly shapes Pacific Rim: Uprising‘s fictional legacy. Pacific Rim: Uprising is a dopey movie riddled with plot holes so chasmal you can feel a breeze flitting through them; it’s a good time at the multiplex as long as the plot isn’t in focus. But in its unintended way it’s a sharp reflection on what it means to live up to your father when your father is a titan in his field.