The new Star Wars films have not only been creatively exciting, but they’ve helped introduce some young actors to the world in ways that most people could only dream of. Though the latest trilogy has a number of younger stars, both Oscar Isaac and Adam Driver were relatively recognizable from previous films and TV shows; however, the heroic leads Rey and Finn were played by Daisy Ridley and John Boyega, relative newcomers taking center stage in two of the biggest, most popular films ever made. Ridley’s non-Star Wars career got off to a decent start last fall with her co-starring role in Murder on the Orient Express. For Boyega, his biggest non-Star Wars platform yet occurs this weekend, as he stars in Pacific Rim Uprising. The good news is that Boyega’s innate charisma and charm are undeniable, even if the film surrounding it isn’t up to his level.

In Pacific Rim Uprising, set 10 years after the end of the first film directed and co-written by Guillermo Del Toro, Boyega plays Jake Pentecost, the son of Idris Elba’s Stacker Pentecost. Since his father died over the course of the first film, Jake has spent the intervening decade partying and committing petty crimes to get by. One day, he gets roped back into working with the Pan Pacific Defense Corps, having previously been a pilot of one of the giant robots called Jaegers when they fought aliens called Kaiju. Though Jake is reticent to return to piloting Jaegers with his old comrade Nate (Scott Eastwood), he eventually doesn’t have much of a choice, as humans have to face off against mutated Jaegers with Kaiju brains and even worse, larger threats.

The setup of each of the Pacific Rim movies is, essentially, goofy nonsense straight out of the mind of a hyperactive eight-year old: robots fighting monsters throughout major cities! Robots with monster brains! Humans inside the robots, and mind-melding with other humans to take down the bad guys! Pacific Rim Uprising doesn’t hold back on that kind of nonsense, and fortunately has a charming center in Boyega. Jake’s character arc does feel a bit overdone and familiar, as he struggles with trying to live in the shadow of his world-renowned and long-dead father. At least the way that Boyega brings life and wit to his interactions with his co-stars is both refreshing and unsurprising.

Even fairly basic scenes, such as an early conversation between Jake and Nate where the more uptight and humorless latter soldier tries to convince the former to embrace his destiny as a Jaeger pilot and ranger, are livened up less by the dialogue than by a randomly odd bit of business. In the conversation, Jake is not only dressed in a gaudy robe but is piling on topping after topping on a late-night bowl of ice cream. It is, in its own way, nonsensical, but daffy and charming all the same, and seems very much like a choice on Boyega’s part. (While the film surrounding him isn’t humorless, specifically in the form of returning actors Burn Gorman and Charlie Day, it’s rarely as playful.) 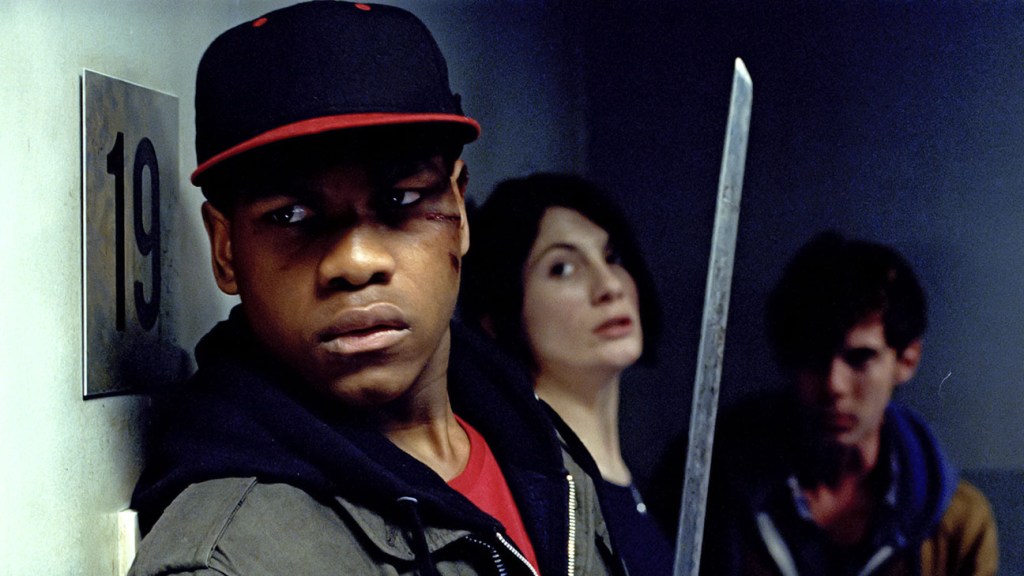 Though this isn’t John Boyega’s first non-Star Wars film over the last few years — he had a major role in Kathryn Bigelow’s Detroit last year — it hearkens back to the role that first put him on the map for a lot of genre buffs. The indie sci-fi comedy Attack the Block was first known for having been produced by Edgar Wright, but the delightfully spiky British blend of comedy, horror, and dark science fiction was Boyega’s first lead role. As Moses, the leader of a lower-class gang of teenagers, Boyega believably sold his character’s transformation into a heroic badass by the end, just as he sells the goofy notion that Jake Pentecost would go from shifty thief to committed leader by the end of Pacific Rim Uprising. The difference is that Attack the Block surrounded the young actor with a fine ensemble, a suitably spooky atmosphere, and a sharp script. Much of why Pacific Rim Uprising works at all lies entirely with the loose and cheerful Boyega.

Just as Murder on the Orient Express suggested that Daisy Ridley’s career outside of playing the scavenger-turned-Jedi Rey will be full and exciting, so too does Pacific Rim Uprising portend a good future for John Boyega. The downside is that Pacific Rim Uprising, in spite of being silly and easy enough to watch, isn’t nearly as deserving of his talents as the Star Wars films are. Ever since his breakout role in Attack the Block, Boyega has seemed like a movie star in the making. Even if Pacific Rim Uprising isn’t as entertaining or viscerally exciting as Star Wars: The Last Jedi, it suggests an encouraging next step for the young star.

'Prey' Nabs Record Viewership on Hulu, According to the Streamer