Continue to The Hollywood Reporter SKIP AD
You will be redirected back to your article in seconds
Skip to main content
March 23, 2018 9:00am
Logo text

He’s adding a second franchise to his resume while still in the midst of completing his Star Wars trilogy. He’s playing the fictional son of Idris Elba, one of his acting heroes. And he’s also producing a big-budget feature for the first time via his UpperRoom Productions.

“After Star Wars, I took my money and reinvested it back into a company and built up a team of people who obviously wanted to find a project to dip our feet into,” Boyega told Heat Vision. “I knew it would be sci-fi, because I love the genre.”

The film is eying a No. 1 opening in the U.S., though with a relatively modest $25 million expected haul. But like it’s 2013 predecessor, Pacific Rim is expected to be much larger overseas.

In a roundtable discussion with Heat Vision at New York Comic Con, Boyega was joined by director Steven DeKnight and Burn Gorman, who reprises his role as Dr. Herman Gottlieb from the Guillermo del Toro film. The trio discussed fan expectations, the future of the franchise and Boyega’s experience producing for the first time.

The first Pacific Rim is one of those movies that has such a passionate following and such a specific sense of what it is. Was there anxiety about stepping up to do a second one?

Steven DeKnight: I was really nervous! I was stepping into some pretty big shoes, but Guillermo was incredibly supportive. You just gotta tackle it and try your hardest and do your best.

Burn Gorman: Because the tone felt the same and the script is whip smart, from the beginning, the first page, you hit the ground running. It was a joy to come back. It’s very rare to say that and mean it, but on this one it felt effortless. The creative team had a very clear and strong idea, and it felt great. It really did.

John, you already have experience of stepping into franchises that have lots of expectations… Why did you choose to add Pacific Rim to a resume that already has Star Wars on it? You talked during the panel about your love of the original movie, was this something where you were such a fan of the first movie you couldn’t say no?

John Boyega: It made sense. I first heard about Pacific Rim on a shabby newspaper in the back of a 171 bus in Waterloo, and the reason I heard about it was Idris Elba had been cast in it. At the time, to a young actor, Idris was the guy who went to the States and showed everyone that you could do it. I just saw him standing there with a jet black armored suit, and it said, “There’s a new movie called Pacific Rim.” I was automatically just entranced by it, and this opportunity made sense. I wanted to do another franchise, I wanted to do another sci-fi. I’m just benefiting off the opportunity — movie stars of old, they’ve all done this, and I’m just following in that path.

Like I said, it’s clear that the fandom for this property is so strong and that these people have strong feelings about what should go into a new movie. Is that something you’re conscious of?

DeKnight: Oh, sure. Especially with social media — they have direct access tell you what they think should come next, and what they like and what they don’t like. I remember when I was working with Joss Whedon on Buffy he said, very wisely, you have to give the fans what they need, not necessarily what they want. You really have to sort through the noise. Especially on the internet, some of the most vocal people may not represent the majority. I always feel like, you just have to tell a damn good story.

Gorman: On the first film, the DNA — the design — was so important, and I think that’s what people have responded to. Working with Guillermo, the detail, the minute detail, working on the set it was like being in a unique new world. And it was like that coming back, it really was. There was a care and attention taken to even the smallest things. That’s quite intoxicating, actually. A lot of people who really loved Pacific Rim love it on a deep visual level, as well as the story and the characters, and that has continued with this one.

DeKnight: We had a lot of talks — designing the Jaegers, you know, concept art, and then it gets into the hands of the visual effects team — we had many talks about James Cameron, that many times when you’d show him the design, I was told by the production team that he’d say, “Oh, this is great, but what does this do, what does that do?” He wants to know exactly what is does. I’d do exactly the same thing with the Jaegers. They’d give me these great designs, and I’d be, “This is good, but what does that do? Is that a vent? What does it do?” It’s that attention of detail that makes all the difference. 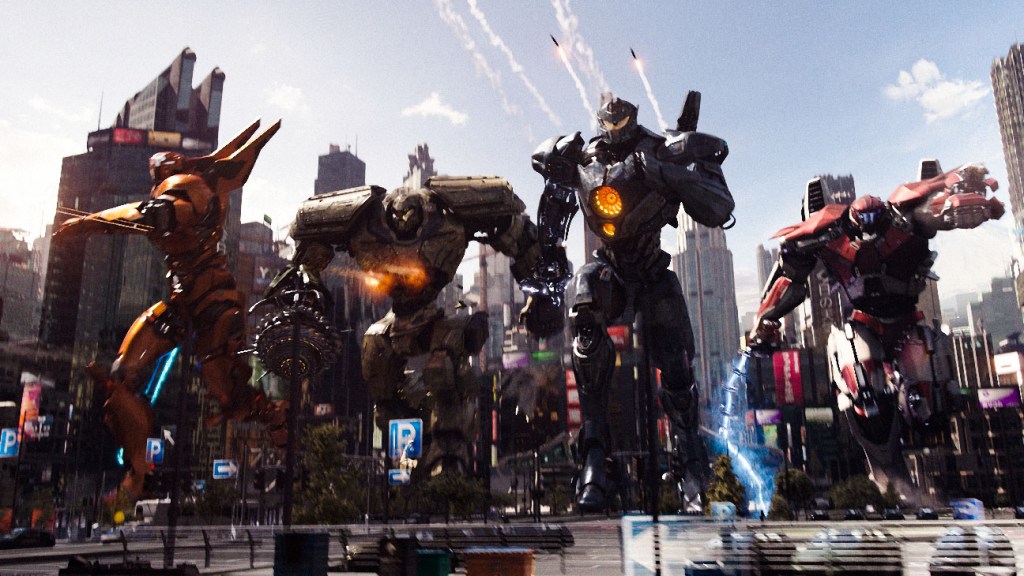 I think the fans have that same attention to detail.

DeKnight: I remember the first I saw the almost-completed effect for Amara’s [Cailee Spaeny] screen inside of Scrapper, and there were so many little things going on that I was delighted to see. It’s so detailed and layered, and I think fans will respond to that.

John, you have talked about serving the old fans and the new fans. Did you have to separate your own fandom from actually doing the work on this film? Were you going to work every day thinking, “I’m Idris Elba’s son!”

Boyega: It pumps the whole thing up. It’s a motivating factor to get up every morning and wear those suits and do what you need to do. It’s a huge motivating factor, and something that we all used as energy on the set, being a fan of the first. We had moments on the set, especially in Australia, where we’d look around and go, “Huh, this is kind of a cool job to have.” [Laughs] It’s good to make a movie that is fun. I don’t want to go to the cinema all the time and be manipulated emotionally, sometimes I just want to have fun.

DeKnight: That’s something that really interests me about this world. I tried to do the same with Spartacus when I was doing that, but this — sometimes it’s forced to try and make something diverse, but in this one, it’s the entire point of it. It’s the entire world coming together to fight a common threat. It was exciting to be able to cast with a wide range, to show everybody. It’s the theme we’re always talking about: it doesn’t matter where you’re from, who your parents are, none of that. Everyone can make a difference.

And it’s a movie that, as you say, is fun, that can be read on a surface level of, “It’s giant robots versus giant monsters,” but it also has this other meaning.

Gorman: It’s a smart script too, you know. It’s pithy, witty and fast. Sometimes when I hear people say, “Oh, it’s fun,” I think, oh, it’s pretty but doesn’t really push things. You can take your kids to it. You can do that with this, but the script really whips along.

Steven, you have talked about resetting the franchise. Is there already a plan to build out the franchise, beyond this movie?

DeKnight: We have talked about it, yes. Part of building this movie was not wanting to paint ourselves into a corner, like, “wow, this thing was hugely popular, what now?” There is a big plan, and discussions about spinoffs. We’ve talked things we could do in the comics, things we could do in an animated series — we’re hoping to blow this thing wide open and go in many directions.

Was the new status quo of Uprising — not only the ten years of unexplored story between the first movie and this one, but also establishing that other people have access to the Jaeger technology and are building their own Jaegers like Scrapper — part of the future planning for expanding the franchise?

DeKnight: It was partly that, and partly wanting to give humanity a chance to recover from the first movie. It’s the perfect time to reset the world, especially with John playing Jake and Scott [Eastwood] playing Nate. I wanted these guys to have been close when they were cadets, and then they were broken apart. I wanted the audience to really feel that, two guys who had been best buddies and were now trying to find their way back to that. Besides the spectacle, which is amazing, I think it’s the characters who are going to push this movie over the top. The characters and the relationships.

What was the shoot like? John, you mentioned being on set in Australia…

Boyega: I think I had many moments of shock and surprise. I mean, the way I’ve always related to the movie has been quite distant, as an audience member, but being heavily involved in this one, was something that every day you appreciate. Being on these sets, with a lot of things that were actually physical sets and things that were built, was a nice surprise. In a CG world, it’s nice to have practical references.

Gorman: I was very impressed by the sense of calm — especially because John was producing, it was Steven’s first time directing something of this scale. As a producer, John, your worlds never ever seemed to bleed. It always seemed like there was a sense of calm and discipline and freedom and fun, which I was really impressed by. You know, when you work on things, and there are producer/actors, sometimes it can become difficult. It was never, ever apparent. It was a real, great set to work on.

Boyega: It was fantastic. I’ve always had high ambitions of being a producer. After Star Wars, I took my money and reinvested it back into a company and built up a team of people who obviously wanted to find a project to dip our feet into. I knew it would be sci-fi, because I love the genre. It was great fun to be part of a producing team that had a great working relationship, so that those worlds didn’t collide. I found it was quite easy to separate those two hats, and we were all sharing ideas, constantly, going back and forth. It’s what it’s about, man. I loved it.

DeKnight: Like Burn said, you never know what you’re going to get. “John’s producing, too?” [Laughs]

DeKnight: I feel so lucky, and Mary [Parent, executive producer] tells me every day, we were so lucky with that cast. Everyone was so wonderful.

Can 'Pacific Rim' Support Its Own Cinematic Universe?