Emily Carmichael is a filmmaker on the rise. She’s enjoying her first opening weekend as a big-budget screenwriter with Pacific Rim: Uprising, but she already has her sights set on what’s next.

In addition to writing a remake of the 1979 film The Black Hole for Disney and penning Jurassic World 3 (due out June 11, 2021), she’s set to write and direct a superhero-family comedy entitled Powerhouse for Steven Spielberg.

It’s a project that could see her reteam with her Pacific Rim star John Boyega, who plays Jaeger pilot Jake Pentecost in Uprising.

“Powerhouse takes place entirely in England with all British characters. We are, in fact, courting John to maybe come aboard and be a part of that project,” Carmichael tells Heat Vision of the project, which is based on a treatment by Jurassic World director Colin Trevorrow.

She met Trevorrow in 2015 through her friend Anna Kerrigan, the creator of the web series The Impossibilities. Trevorrow has since become a key collaborator and mentor for Carmichael, who credits the filmmaker for giving her career a major boost when he passed along her sci-fi script Eon to Steven Spielberg, who liked the script.

“That is what changed everything, but it all started with me just reaching out to a fellow creative [Kerrigan] whose work I enjoyed,” says Carmichael, who, at the time, was best known for her short films that were recognized across the festival circuit.

In a conversation with Heat Vision, Carmichael also discusses the writing process behind Pacific Rim: Uprising following the exit of Charlie Hunnam and goes in depth on her working relationships with Spielberg and Trevorrow.

Charlie Hunnam’s unavailability affected your finished script (which you co-wrote with Kira Snyder and director Steven S. DeKnight). How did you handle the news that your first major studio script would have to be rewritten?

Well, obviously having John Boyega in the film is amazing. He is such a great movie star. It’s great to have him in a leading role in a franchise film. He can obviously carry a film, and he really makes this film. So, all in all, it worked out. On a film like this, it’s so collaborative, and you’re sort of a piece of a machine. I didn’t feel any sense of personal betrayal [laughs] that the draft I had worked on personally wasn’t gonna be the shooting draft. 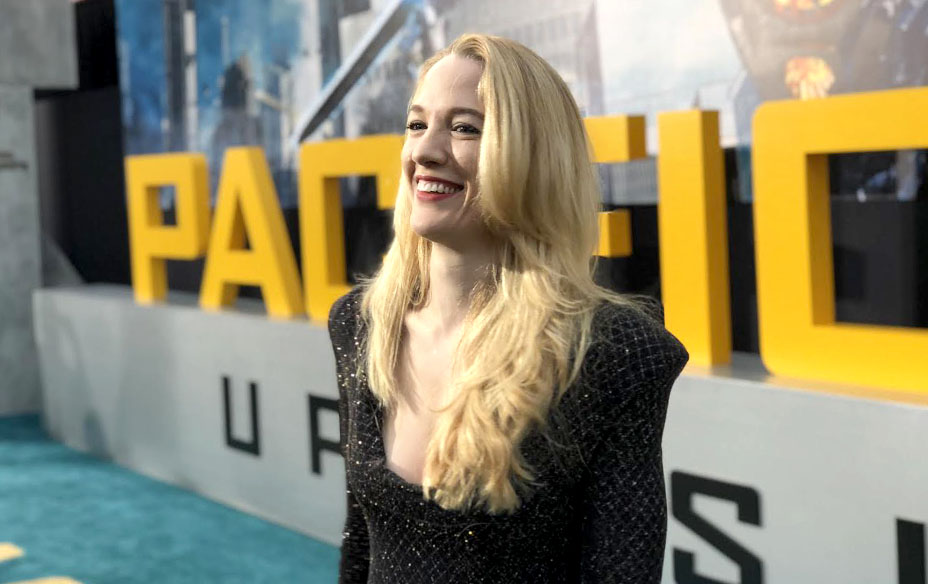 Once Pacific Rim: Uprising recalibrated from Charlie Hunnam’s Raleigh Becket to John Boyega’s Jake Pentecost (an idea that stemmed from producers Guillermo del Toro and Mary Parent), you were no longer available to work on the John Boyega-led script. But did any of your “darlings” carry over from your Raleigh Becket/Charlie Hunnam script to the Jake Pentecost/John Boyega shooting script?

Yes, there are a couple of lines in there that I typed on my computer, and now they’re in the film. Also, as the person who wrote the very first draft of the first half of the movie, there’s a part where a Jaeger has to catch a helipad and prevent the helipad from falling on a bunch of protestors (as well as Jing Tian’s Liwen Shao). It was a chunk of masonry at the time; it actually got upgraded to be a falling helipad which I feel is an improvement. But, dealing with the mechanics of that situation is just something I remember from writing that action sequence. It’s a tense situation because there’s a big crowd that’s gathered, and Gypsy Avenger is there to be an honor guard and to protect everyone. So, it’s kind of a stressful situation and into that situation, comes this rogue Jaeger.

At Pacific Rim: Uprising’s Hollywood premiere, you told Heat Vision that you love writing action. What’s your general approach to writing action in a way that the general viewer can understand?

I have evolved in my approach to screen directions. I try to keep my screen directions to single lines when possible. I focus my screen directions on the most obvious thing that’s happening in a scene, and not begin sentences with modifying clauses — just to go straight to the heart of the matter. A lot of people, when they read a screenplay — especially in an early development stage — they will skip through the action. I’m trying to get them to not do that. I’m trying to write action in a way that really grabs your attention, that’s visual to you as you read the movie’s screenplay, and that’s exciting (on the page). 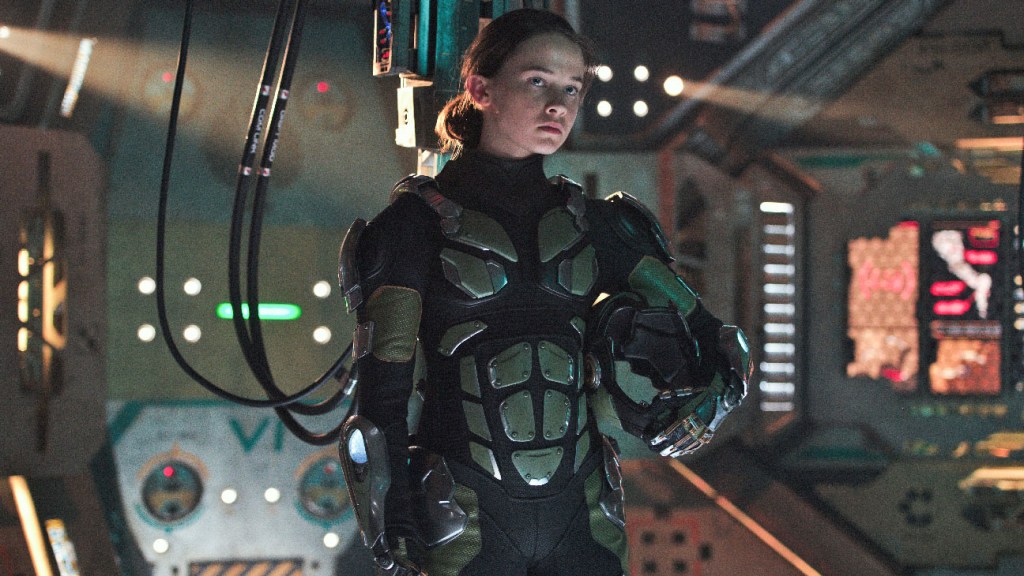 Out of curiosity, was the Amara Namani character played by Cailee Spaeny in your original script?

Yes! She’s a huge part of that script. Her throughline certainly changed, but she was very much a part of the draft I wrote.

Spaeny’s Namani was my favorite character in the movie!

She [Spaeny] is really great! Personally, I’m very excited about Namani’s rivalry with her fellow pilot Vik [Ivanna Sakhno]. That’s always been a really fun part of the script to me.

I think writers rooms can be beneficial if somebody is directing the process with a clear vision, and has a lot of authority to reject any ideas that they don’t like. I think that’s a crucial ingredient. Writers’ rooms are fun, but I most prefer to be writing by myself or with one or two other people.

Hollywood is finally evolving via the various movements that came to light last fall. While it’s well publicized that women and people of color are underrepresented in terms of director hires and lead roles onscreen, we seldom hear about screenwriters who also endure similar adversity. That being said, when you consider recent hires such as Geneva Robertson-Dworet (Tomb Raider, Captain Marvel), Christina Hodson (Bumblebee), Lindsey Beer (Godzilla vs. Kong, Dungeons and Dragons), Jac Schaeffer (Black Widow) and Amanda Silver (Jurassic World, Avatar 3), there appears to be some progress as a growing number of women, including you, are writing major studio genre and/or tentpole films. As a woman screenwriter-director, can you feel or sense that the tide is beginning to turn?

Rather than relying on one writer-director’s subjective and anecdotal opinion about whether the tide is turning, I really encourage people to look up the numbers themselves because those numbers are readily available. If you’re thinking and caring about the world that you live in, and want to know how entertainment is made — google those numbers. [Editors note: see them here.]

You listed some wonderful writers, and I’m very excited for all of those writers. However, we’ll have a situation of equality when the list is half of all working writers.

Since most blockbusters are helmed by men, what is something that a woman screenwriter-director’s perspective can add to genre filmmaking, or any genre based on spectacle, that is lacking so far?

Personally, I pride myself on writing and directing great characters of all genders and numerous characters of genders that are not my own. If all male storytellers could say the same thing, honestly, I think the quality of men’s storytelling would really improve, and we would live in a better world.

What lesson did you learn from Pacific Rim: Uprising that you’ll apply to Jurassic World 3, The Black Hole or Powerhouse?

Pacific Rim: Uprising is me, as part of a team, with corporate influence, while making a movie really quickly. Jurassic World 3 has a much longer timeline which is a luxury, something I’m going to really enjoy and take advantage of. Similarly, Powerhouse is a personal story that I’m writing based on a treatment by Colin. So, it’s a much more self-determined writing process where I can make my voice a little more clear.

Well, Powerhouse takes place entirely in England with all British characters. We are, in fact, courting John to maybe come aboard and be a part of that project. I think, if anything, the English characters in Powerhouse speak in a way that’s too English. But, I would never have one of my English characters use the word “awesome.” [Laughs]

Jurassic World 3 was announced in late February 2018 with you writing alongside Colin Trevorrow. Since you’re writing the follow-up, I presume you’ve already seen Jurassic World: Fallen Kingdom. However, we’re seeing more and more massive sequels and threequels being written (and/or produced) before their predecessors have even been released. Do you prefer to write in a vacuum like this before the onslaught of praise, criticism and fan theories potentially creep into mind?

I think it’s great to have all the time that we can. And certainly, having seen Fallen Kingdom, that gives me a lot of the information that I want to have as a writer when I think about writing the third one. But, I know the reactions to Fallen Kingdom will shape my feelings and opinions in an undefined way. I don’t know what that’s going to be like yet, but I imagine that it will have an influence on me, even if it’s difficult to describe what that influence is.