Over the last decade, Hugh Grant has not so much eschewed the cinematic spotlight as he has fully attempted to embrace the character-actor status he desired to achieve even during his super-popular period in the 1990s. Grant’s shift away from leading-man parts means that he has appeared only in a handful of films in the last few years, from Cloud Atlas (2012) to Florence Foster Jenkins (2016). His latest project, Paddington 2, features the British star in villainous mode, indulging in what may be his favorite type of acting: playful self-mockery.

Grant appears in the utterly delightful Paddington 2 as the new antagonist, a self-involved theater actor named Phoenix Buchanan whose glory days are long since behind him. (When the sequel begins, Buchanan is best known for a terribly cheesy commercial in which he wore a full-body animal costume and extolled the virtues of canned dog food.) Early in the film, the heroic and kind bear Paddington inadvertently alerts Buchanan to his recent discovery of a pop-up book that functions as a secret treasure map and also features heavily in Buchanan’s ancestry. The arrogant thespian steals the book and manages to frame Paddington for the crime. As the bear tries to break out of prison, Buchanan keeps dressing up in various disguises derived from costumes he once wore on the West End stage to get closer to the treasure.

For an actor who has professed before that his personality doesn’t line up with the rakish and charming roles he played in the ‘90s, Grant may have found one of the best possible parts to play in Phoenix Buchanan. From his first scene, Buchanan is portrayed as a foolish and vain ex-star whose confidence in his own abilities is such that he refuses to work with anyone else. Instead, he’s trying to get a vainglorious one-man show off the ground in which he would play everyone from Macbeth to Ebenezer Scrooge, and even get a chance to show off his tap-dancing abilities.

Grant, as well-known as he is, rarely appears in truly family-friendly fare. Before Paddington 2, he provided the voice of the lead character in Aardman’s The Pirates! in an Adventure With Scientists! (2012), but he is otherwise at home in romantic comedies like Four Weddings and a Funeral (1994) and Love Actually (2003), or more dramatic fare like Sense and Sensibility (1995) or Florence Foster Jenkins. However, his comic sensibilities, which always lean toward sarcasm (arguably, Grant’s best performance is as the acidic lead in the 2002 dramedy About a Boy), fit in squarely with Paddington 2‘s sly tone.

Phoenix Buchanan, as brought to life by Grant, desperately thrives on validation; he’s first seen opening up a local carnival and gets far more pleasure from reminding the mostly adoring crowd of his past than the fact that he’s essentially emceeing a ribbon-cutting ceremony. In some ways, Buchanan’s various criminal acts are a more satisfying one-man show than a real stage show could ever be; he’s able to convince a distracted security guard that he’s in disguise as an “unusually attractive” nun, and otherwise fools his neighbors as to his evil deeds until they get up close to him. Mr. Brown (Hugh Bonneville), for one, believes that Phoenix is an upstanding citizen until his wife breaks into the actor’s house and they discover stage disguises in his attic. “Oh my God, he’s a weirdo!” blurts Mr. Brown upon the sight. 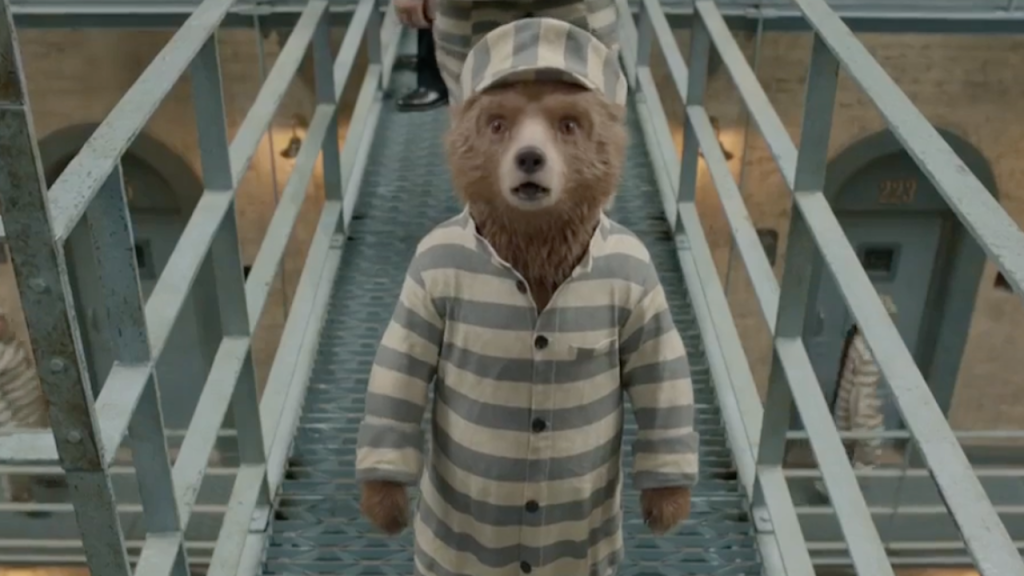 Grant’s performance is, unlike the character he’s playing, completely bereft of vanity; it takes a fully committed actor to don a dog suit, as he does in one of the film’s best gags, and not look utterly depressed. Phoenix is, from the character’s design in the script by Simon Farnaby and director Paul King, an over-the-top creation — at one point, he looks at himself outside in a passing window, gasps and shouts “Ah! Cravat!” realizing what he forgot to wear — but Grant does not hesitate to leap as far over the top in his performance, culminating in a post-credits moment where, with unfettered brio, he leads a song-and-dance number with brightly clad prisoners.

Hugh Grant has become much more selective over the last decade about what films he’ll appear in, let alone how often. Paddington 2 fits his sensibilities in more ways than one. As with its predecessor, this is a very, very British film —producer David Heyman also ushered the Harry Potter films to life, and it feels like, if this series keeps going, it could create a similarly vast ensemble of famous U.K. performers. Few actors have embodied utter Britishness in the last 30 years like Hugh Grant, so Phoenix Buchanan is a part he seems born to play. Though the nefarious thespian he plays is up to no good, Grant’s versatility and self-mockery come out in full force, in a rich performance that serves as a fine reminder of the depth of his comic chops.