If you’ve passed through the gates of Walt Disney World’s Animal Kingdom Park, you’re familiar with the signposts pointing toward exotic locales like Africa and Asia. Enter the Florida park now, though, and you’ll notice those signs have added a new directional arrow, one leading to the fictional land of Pandora.

Based on James Cameron’s record-breaking blockbuster,  Pandora — The World of Avatar opens Saturday and is the largest expansion in the park’s near-twenty-year history. The sci-fi fantasy world transports visitors to the native home of the Na’vi, but doesn’t retell the film’s tale. According to the project’s principal manager Tim Warzecha, Pandora serves as neither a prequel nor sequel to the 2009 movie, but rather is a more standalone experience.

Rather than having guests relive the conflict between humans and Na’vi, Warzecha said the land is “all about the people, the environment, the culture, the animals and the beauty of the world.” Of course, as anyone who’s ever tried the Grey Stuff at Fantasyland’s Be Our Guest restaurant can imagine, Disney has delivered on this vision with unparalleled detail and incomparable immersion.

As I crossed into the Valley of Mo’ara — a new part of Pandora specifically envisioned for the expansion — I was transported into “a whole new world” even Jasmine and Aladdin would envy. Floating mountains filled the sky, Sturmbeest roared from the surrounding rainforest, and an Alpha Centauri Expeditions’ field guide (park employees who stay in character at all times) warned visitors not to get too close to the Chalice Plants; as lethal as they are lovely to look at, the carnivorous flora are apparently capable of swallowing their prey before digesting them with an acidic enzyme.

Blessed by a Shaman

After snapping a pic of the “planimals”, as the guide playfully called them, from a safe distance, I found my way to the Na’vi River Journey. Sort of Pandora’s take on It’s a Small World, the boat ride is one of the land’s two major attractions. Described by Warzecha as “a lyrical journey in a sacred cave,” the indoor ride takes passengers through a breathtaking bioluminescent rainforest populated by majestic alien wildlife. 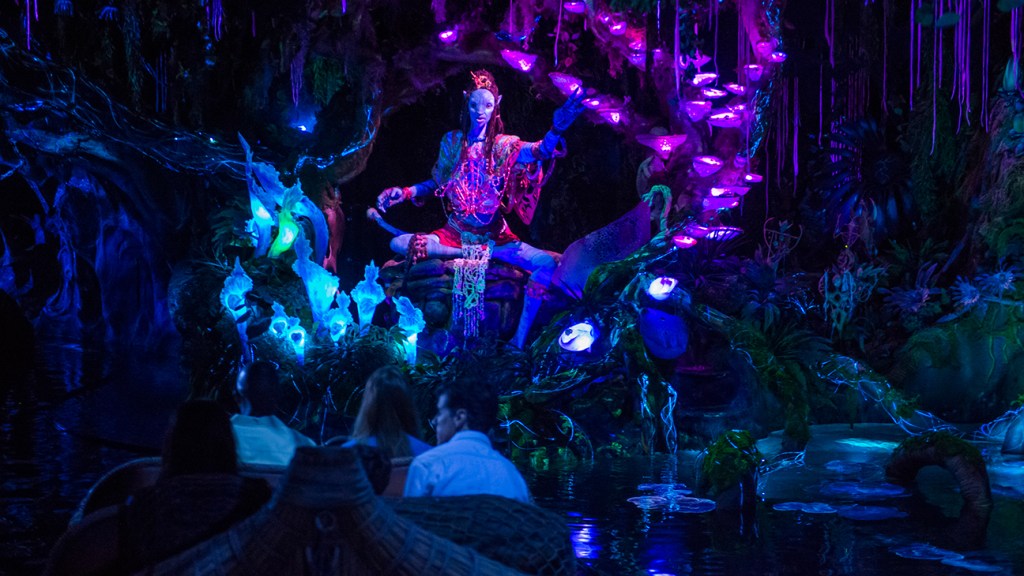 During my journey, I spotted a number of native species, all brought to life by technology that seems to be pushing the envelope even past Disney’s previous efforts. Among the lush, glowing environment, a Viperwolf pushed her pups forward, a deer-like creature called a Hexapede suddenly stopped to stare at me like, well, a Hexapede in headlights and six-legged reptiles leapt on large leaves hanging above. The latter yielded an especially cool effect, as I didn’t actually see the lizard-like critters, but rather the shadows of their many limbs through the bouncing foliage they played on.

As I soon discovered, all these exotic creatures, as well as some Na’vi seen in the distance, were headed to the Shaman of Songs. The river journey begins relatively dark and quiet, but both the bioluminescence and music increases as the gap is closed between passengers and this spiritual character. Drenched in detail and incredibly expressive, the female Shaman — which Warzecha later described as Disney’s “most advanced audioanimatronic” — closed the journey by blessing me with a rousing song and dance ritual. 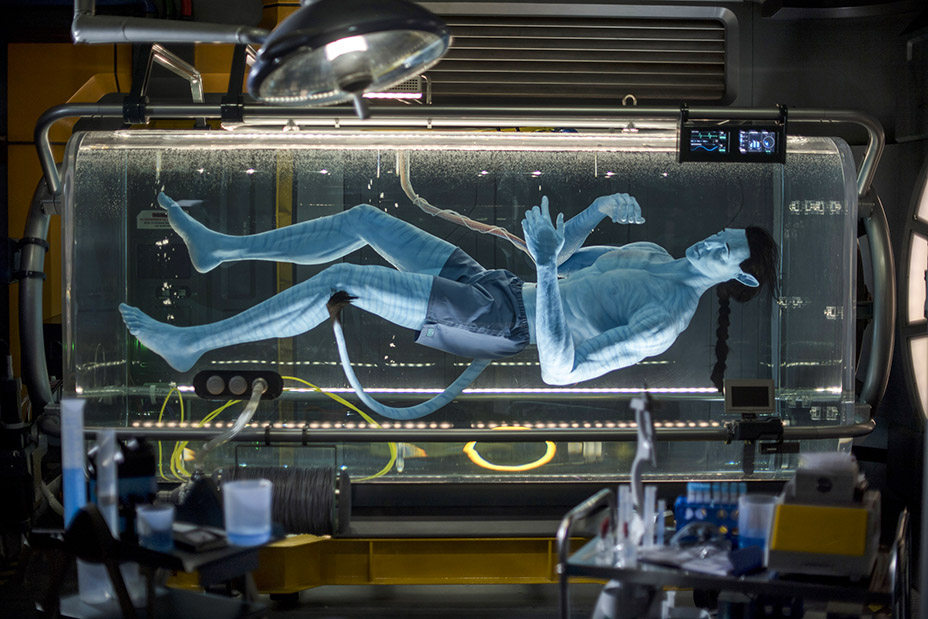 If the serene, soothing Na’vi River Journey stirred my emotions, then my next Pandora destination, Flight of Passage, took them on a pulse-pounding roller coaster ride. While not a literal coaster, this 3D motion simulation packs more thrills than any loop-de-loop I’ve ever had the pleasure of screaming through. Blending elements that will be familiar to fans of Disney’s Soarin‘ and Star Tours rides, the E-ticket attraction puts patrons on the backs of enormous flying beasts called Banshees.

Before mounting the winged monsters, which requires donning a pair of 3D specs and straddling what looks like a stationary bike, Flight of Passage leads visitors through a stunningly realized, story-driven queue. Observant participants will notice a series of in-progress lab experiments, see the oversized skull of a Banshee and watch a Na’vi peacefully float in a water-filled chamber. As the fiction — entertainingly described in training videos — goes, riders are then neurologically linked to a Na’vi that’s already soaring through the skies.

That might sound like a lot to swallow, but I had little trouble suspending my disbelief once the wind literally hit my face. Sitting before an enormous, enveloping screen, visitors are whisked away on a seat-of-the-pants adventure. On top of delivering an incredible sense of speed and flight, the immersive attraction incorporates a number of effects to realistically sting the senses. As my Banshee barreled over the ocean, for example, a whale-like beast breached the surface and sprayed me with water; following a near collision with the sea behemoth, I then found myself clutching the ride vehicle as I narrowly escaped a crushing rip curl.

Seat vibration effects realistically simulate the Banshee’s breathing, while various fragrances — like the distinct smell of dirt kicked up by stampeding beasts — further fuel the fantasy. The attraction isn’t without its quieter moments, like a surprisingly emotional pause taken in a beautiful cave, but between its hair-raising dips and dives and a pulse-quickening encounter with a rival Banshee, it leaves little time to catch your breath. Exiting the ride, I heard a number of enthusiastic reactions, from “It gave me goosebumps” to “I have tears in my eyes.” After experiencing one of Disney’s most moving, thrilling attractions though, my only thought was “When can I ride again?” 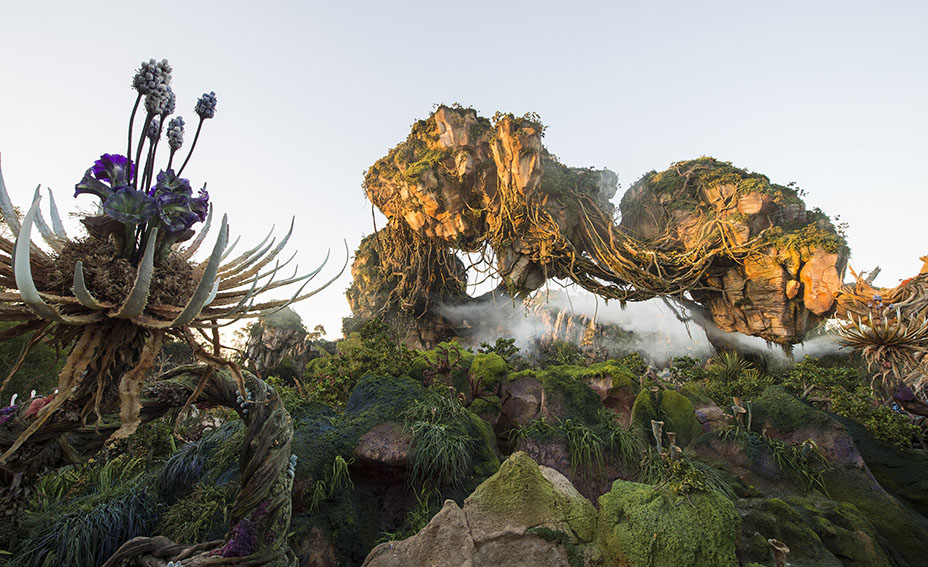 This same sentiment extends to the entire park expansion. I spent nearly a day-and-a-half in Pandora, but felt I only scratched the surface of what it has to offer. While I wound up riding both attractions multiple times, I wish I’d spent more time leisurely exploring the park in the evening, when it transforms into a bioluminescent feast for the eyes. I also would’ve enjoyed speaking further with the Alpha Centauri Expeditions’ field guides, and learning more of the land’s mysteries from its chatty ex-pats (quirky humans who used to live on Earth and share stories about Pandora with park guests). And while I enjoyed my green-tinged Hawke’s Grog Ale from the local Pongu Pongu watering hole, I’m kind of kicking myself for not sampling the Mo’ara Margarita. More than that though, I’m beginning to miss the Banshee I bonded with and almost adopted (for $49.95) from the Rookery in Pandora’s Windtraders shop.

I look forward to doing all these things and more on my next trip to Pandora, but my advice to first-time visitors is to stop and smell the flora. Except for the Chalice Plants, of course, as they may eat you whole before you have the chance to ride a Banshee. 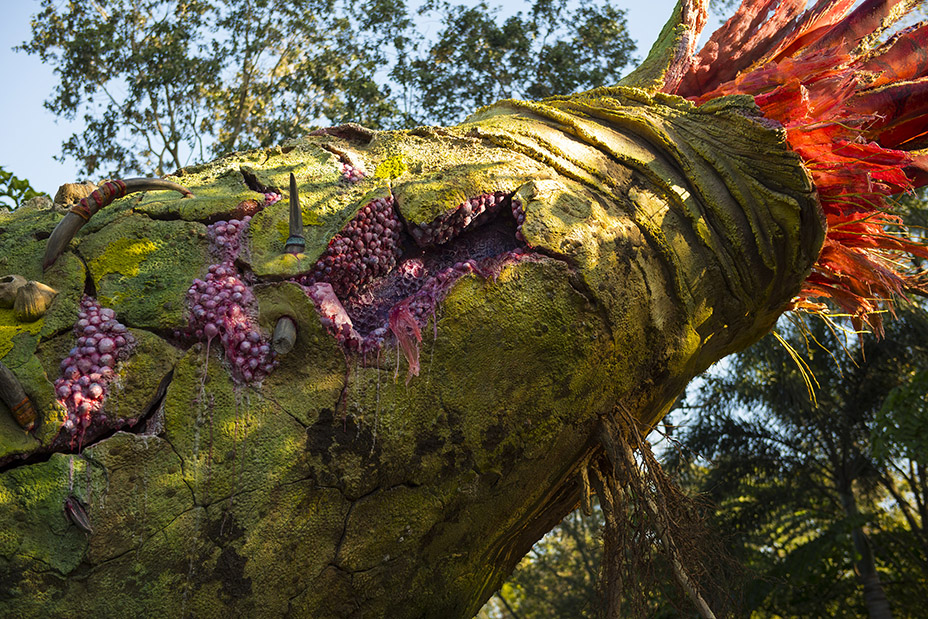