The woman with the last word at the Oscars had many viewers turning to Google and Twitter as the telecast drew to a close Sunday night, but anyone knowledgeable about the Korean media industry already knew exactly who she was: Miky Lee, vice chair of the powerful conglomerate CJ Group, and the de facto godmother of Korean entertainment.

As an executive producer on Parasite, Lee is not a named recipient of the genre-bending movie’s groundbreaking best picture award, but as a leading champion and patron of Korean film for the past quarter century, she is credited by Bong Joon Ho and much of the country’s artist class for propelling Korean cinema (and music and television) into the global marketplace.

The Hollywood Reporter profiled Lee in its Feb. 5 issue on the eve of the Oscars, and two days after the ceremony, THR spoke to her again to reflect on her most memorable moments of the night, the Oscar outfit she customized in honor of Parasite and how the film’s four historic wins will shape the Academy’s – and Americans’ – embrace of international content in the future.

You created an additional unprecedented Oscars moment when Tom Hanks, Charlize Theron and other guests got the producers to turn the lights and microphone back on for you. Had you already planned to speak in case Parasite won best picture?

To tell you the truth, when the microphone was down, I really didn’t know that meant get off the stage. When you are on the stage, you don’t know whether the lighting is on you or someone else. You cannot see the whole picture. They had told me they usually let the producers and the directors speak, usually three people. Bong Joon Ho said, “I’ve been talking too much, so you have to.” So I thought we had some time. I thought it was a technical error that the microphone went down. And then I saw Tom Hanks and Charlize say, “Go for it, up up up!” If I had known that meant get off the stage, I don’t think I could have said that speech. (Laughs) I should have been telling myself, “Get off the stage, get off the stage!”

Please tell me a little bit more about your custom Parasite outfit from that night! You added a bunch of quotes and phrases from the movie to your top, right?

It’s Comme des Garcons vintage that I’ve had for a long time. It’s a collection of all different bands, and I immediately thought, “The Parasite poster has the black bands over the eyes, and it’d be really fun if I could say something from the movie [on the jacket].” 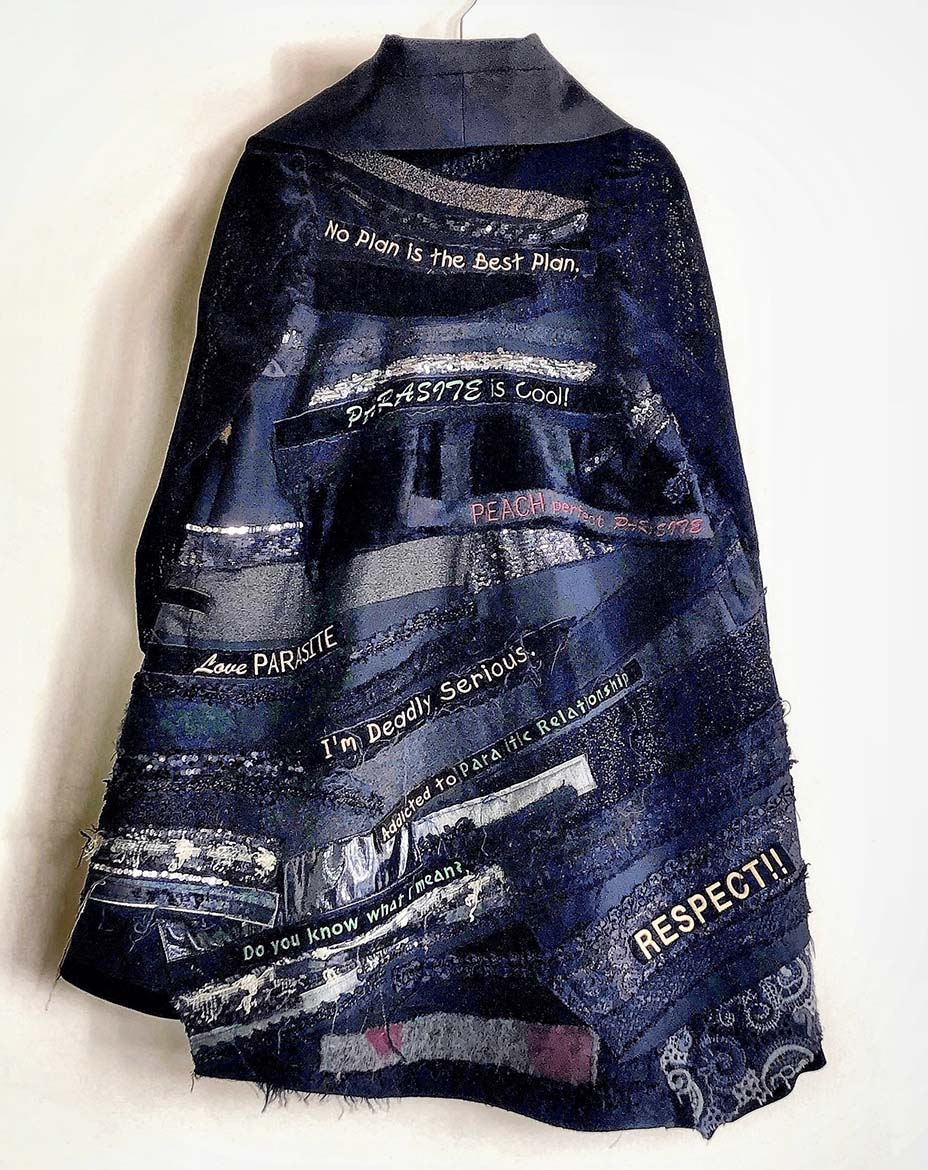 Any favorite moment or memory from CJ and Neon’s afterparty at Soho House?

I was really honored to have Quincy Jones there because he’s been my mentor for a long time, and he’s the one who kept telling me, “When you are true to yourself, that’s when you can embrace all different cultures, all different types of people.” He really loves Korean K-pop, traditional food, Asian music. He knows music and movies all over the world, from Morocco to Indonesia, China, Japan, you name it, and he’s always encouraged me to stay true to myself and take things and work hard. So it really meant a lot to me [to have him there]. 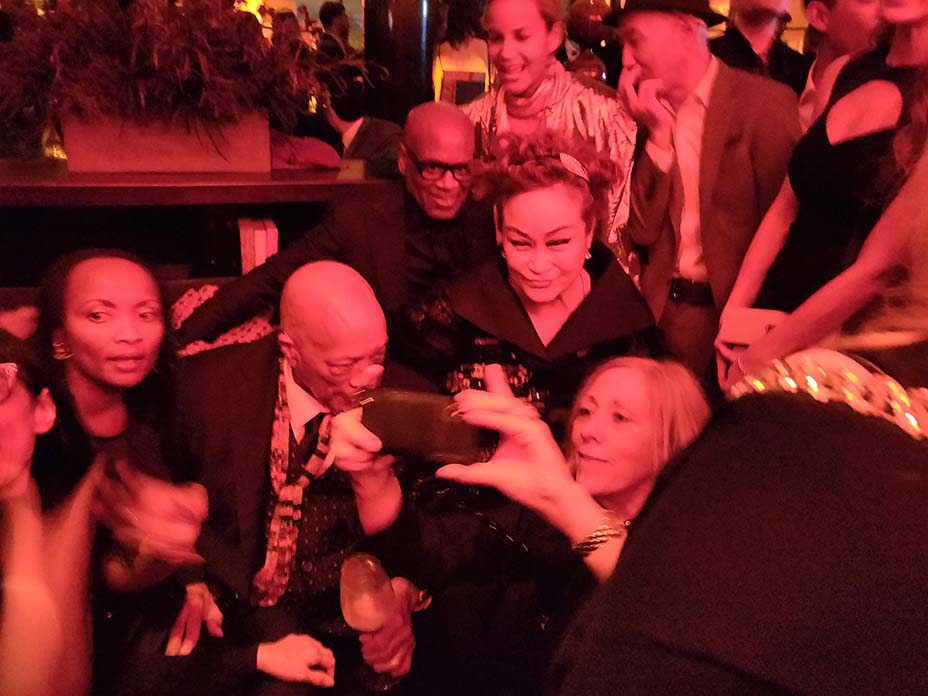 I always worried that there is going to be that discontinuation between the ’90s and now, because this generation doesn’t have enough opportunity to listen to oldies because there is so much current content. But these days, ’90s music is kind of trendy in Korea. Kids are learning more about H.O.T [and fellow ’90s K-pop groups] g.o.d, Shinhwa. So when A.C.E was singing H.O.T, I was like, “Wow, H.O.T is being introduced to Soho House by these new generation kids.”

And a throwback for the real Koreans in the audience! H/t ’90s K-pop aficionado @ForLaDolceVita for ID’ing this cover of H.O.T.’s “Hope.”

’90s hip hop at Soho House?! Only a world in which #Parasite is the #Oscars2020 Best Picture! pic.twitter.com/RZ6nSyRAsE

Parasite‘s historic win has felt like a victory shared among Asians and Asian Americans, as THR critic Inkoo Kang wrote.

I’m so happy to hear that. Living in L.A. for 10 years, I’ve seen so many Asians working all over the place. Press, studios, productions, we really work hard. And it’s really time for Asians to be recognized and our hard work finally to get to be seen, so I think this is really hooray for the whole Asian American community.

Years ago when you were knocking on studio doors with DVDs trying to get Hollywood to consider Korean film, did you ever seriously imagine that a Korean movie would one day win best picture — becoming the first non-English language movie to do so — and that you would witness it and be a part of it?

Not specifically the Academy Awards. I grew up in the ’60s, and all I watched on TV and in movie theaters was shows like Bonanza and The Donna Rich Show and movies like Giant, The Godfather, The Sound of Music. The reason why we didn’t grow up watching Korean content was because we didn’t have our own. So I was concentrating on how to make the best exposure of all kinds of Korean content. “Someday, people will consume Korean content.” That’s all I was thinking.

But to have the right content, you have to create an environment where all our Korean creators can create various kinds of content, from comedy to arthouse to commercial to TV to movies. CJ has been trying to create that ecosystem for the creatives to be able to express their desire, their passion, their creativity. That’s what we were focusing on. You have to have this foundation where you keep creating edgy, diversified content. That’s what I have in mind, constantly. If you look at CJ films, it’s a very wide range from arthouse films to commercial films. TV content [includes] music, nonscripted, scripted, very artsy content. So we just try to support all the creators in Korea. And each time we get recognition, we get more confidence and we get more excited, so I think that’s how we got here now.

It’s going to inspire a lot of international creators and filmmakers. Over the years the Academy has been widening its international membership, and Parasite winning really shows the voters are ready to embrace new culture, new content. It opens the door not just for Korean films but international films as a whole.

CJ has 17 English-language films currently in development, including a Universal and Kevin Hart remake of your hit comedy Extreme Job. How do Parasite‘s awards accomplishments impact CJ’s Hollywood strategy?

You really have to identify the travel-able content and localize it. You cannot just remake it. You have to find the right local director who believes in it. We’ve done it with all different directors from different countries. We’ve been doing all these things, and now we have to have a more specific, elaborate strategy. It’s more about prioritizing than doing new things. This Academy moment is getting people really interested in Korean content. People say, “My friends always talk about this Korean TV drama on Netflix or somewhere. This is why he or she was talking about it so passionately.” Now they’re gonna look into all this content that they’ve been hearing about. This is a really good opportunity right now. We have to strategize and prioritize.

Are you going to aim to make more awards contenders?

With creativity or creation, you cannot do it deliberately. We’ve been encouraging a lot of creators, filmmakers, film directors in Korea, and all we have to do is do it more. Spend more money. [CJ’s multiplex chain] CGV supports arthouse films in Korea [through a filmmaking fund and dedicated screens]. That’s where all these young up-and-coming directors start their career. You have to create a better environment for them. We cannot create a film for the Academy. We have to watch over and really encourage people to go forward. That’s our job. And a lot of people are inspired right now.

Director Bong has said that he is currently writing two projects, one in Korean and one in English. Are you officially a part of any of that?

We are always talking, so we will work together, [but there’s nothing] to announce yet. “I have to write and I have to direct and I have to produce. It takes a long time, so bear with me.” That’s what he says.

From 'Parasite' to BTS: Meet the Most Important Mogul in South Korean Entertainment