If Walt Disney Studios cochairmen Alan Horn and Alan Bergman were in a Las Vegas casino, they’d be accused of card counting. The company’s jaw-dropping hand in 2019 resulted in record-shattering winnings: an estimated $11.1 billion worldwide — including six films that soared past $1 billion, and a soon-to-be seventh, Star Wars: The Rise of Skywalker (the count grows to eight when factoring in Spider-Man: Far From Home, which Marvel Studios produced for Sony).

That’s north of $13.1 billion when accounting for the Fox and Fox Searchlight titles it inherited in the March merger (Disney set the previous industry record of $7.6 billion in 2016 and has been No. 1 since).

'Strange World' Box Office: Why the Disney Animated Pic Spun Out of Orbit

The 2019 deck was carefully engineered to coincide with the November launch of Disney+, CEO Bob Iger’s top priority. What better value proposition than to offer streaming customers access to a bevy of branded blockbusters, including Avengers: Endgame, the top-grossing title of all time ($2.79 billion)?

The question now: Can Disney, or any other studio, ever replicate this feat? Barring mass consolidation or a reinvention of the theatrical experience, most experts believe Disney’s 2019 is the high-water mark.

“Clearly, there was an alignment of stars across all our brands. Movies don’t get to a billion dollars without being good,” says Disney distribution chief Cathleen Taff. “It’s going to be hard to duplicate this year, but I’m an eternal optimist.”

Adds analyst Eric Handler, “It was a perfect storm for Disney, and an embarrassment of riches. Next year is going to be tough in terms of comparisons.” In 2020, there’s no Star Wars movie (the franchise is in reset mode), one live-action remake instead of three, and unproven Marvel pics (Black Widow and Eternals), while Pixar is releasing two original films (Disney had Toy Story 4 and Frozen 2 in 2019).

The lopsided landscape meant that Disney commanded more than 33 percent of market share domestically — the next closest studio was Warners at 14 percent. The international box office hit a record $30 billion-plus, according to Comscore, up from $29.2 billion in 2018.

Final domestic or international numbers are not yet available, but global revenue will likely hit an all-time high of $41.3 billion.

“The biggest challenge is theatricality and making films that demand to be seen in theaters,” says Sony Pictures Motion Picture Group chairman Tom Rothman, whose studio made a notable comeback in 2019 with such films as Jumanji: The Next Level, Spider-Man: Far From Home and Once Upon a Time in Hollywood — which grossed nearly $373 million worldwide, the top original pic of the year. “The death of originality has been greatly exaggerated,” says Rothman.

Sony posted domestic revenue of $1.35 billion — its best showing since 2012. And it beat Universal when excluding Focus Features to come in third in domestic market share.

Warners released a flurry of smaller adult dramas in 2019 that badly misfired (including a near-career worst $4.6 million debut for Clint Eastwood’s Richard Jewell). Still, the studio placed No. 2 in market share worldwide, thanks to stunning performances by Joker and It: Chapter 2.

“The discrepancy between the movies that work and those that don’t is greater than ever,” says Warner Bros. domestic distribution president Jeff Goldstein. “What we see very clearly are the clutterbuster opportunities that a fresh and different film like Joker can deliver.”

Box office analysts predict that 2020 could result in a much closer race between Disney, Warners and Universal, at least in terms of market share, while Paramount hopes for a major comeback on the wings of Top Gun: Maverick and A Quiet Place: Part II.

As Disney returns from the stratosphere this year, studios will have to collectively make a stronger stand if moviegoing isn’t to decline again, particularly as more join the streaming race. Wall Street analyst Richard Greenfield says it’s only a matter of time before one of the majors breaks theatrical windows (there’s renewed talk of a shortened 60-day window, down from the current 90 days). “The bigger you get in streaming, the less important the window becomes,” says Greenfield, a Netflix bull. “I think The Irishman and Marriage Story got seen by far more people on Netflix than they would have in theaters.” 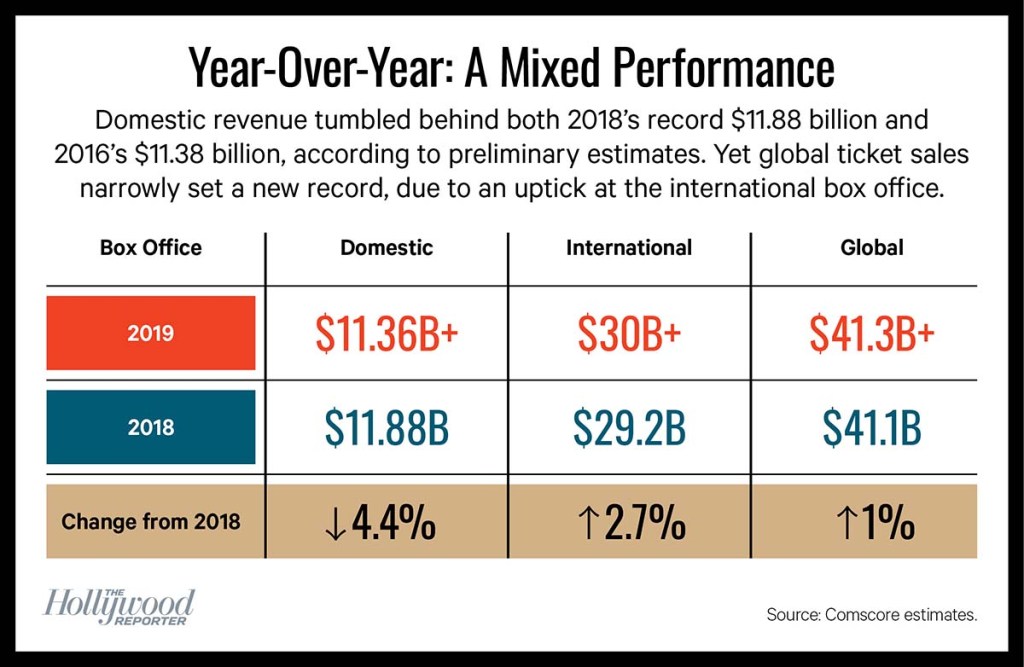 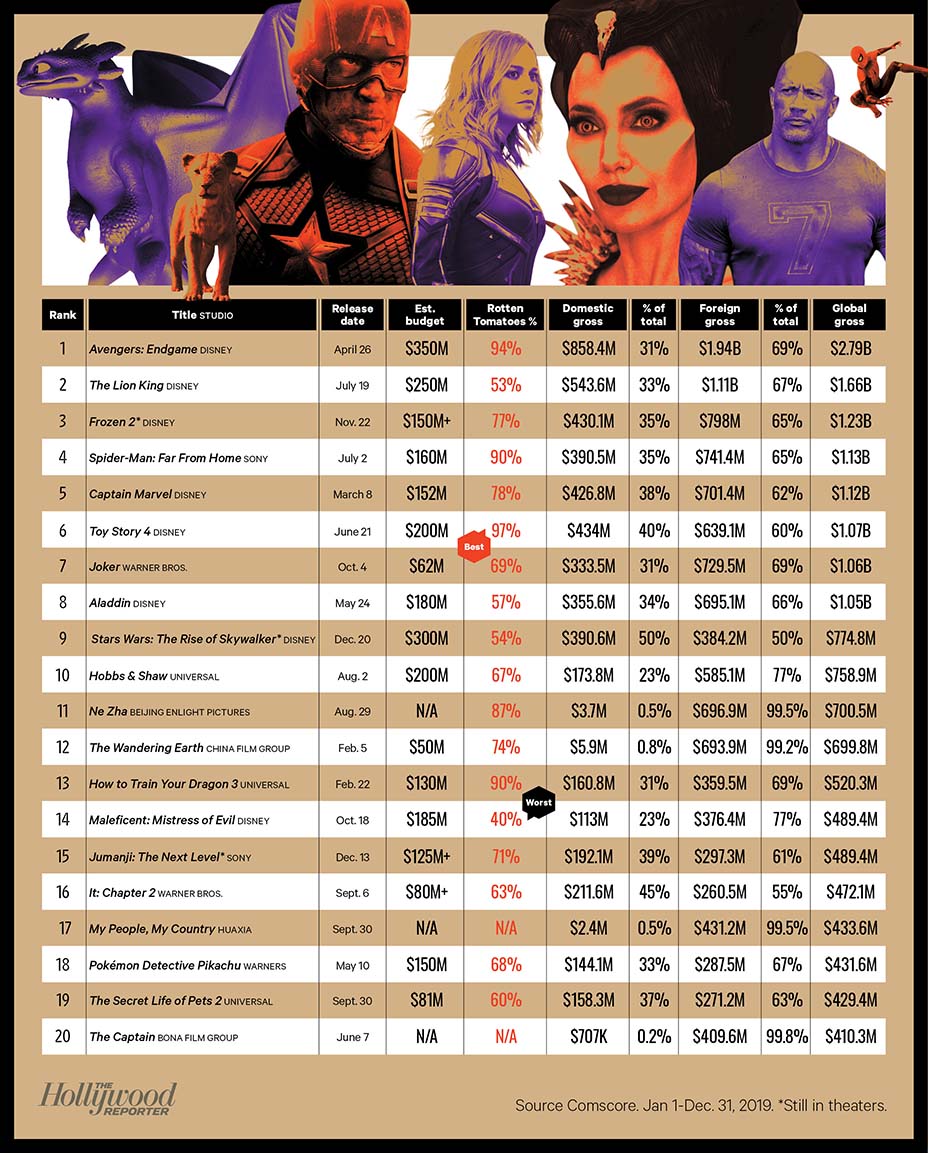 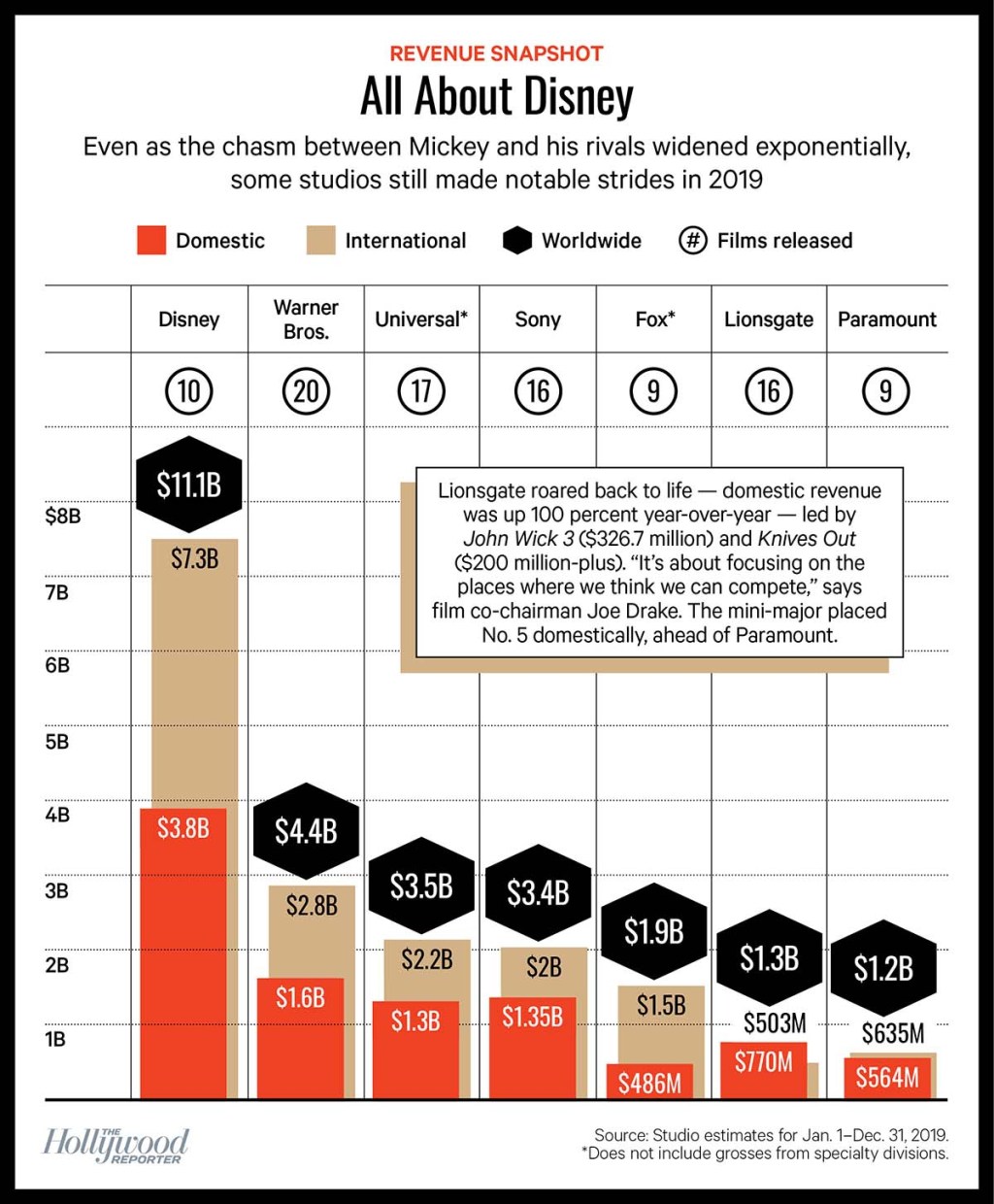