Even by Hollywood standards, they were an odd couple: the sitcom star with a famously nasal voice who became the first female director to gross $100 million and the NBA bad boy with wacky hair who would one day help introduce Donald Trump to Kim Jong Un. But somehow Penny Marshall and Dennis Rodman became the best of friends, hanging out at basketball games and sharing Thanksgiving dinners at her Hollywood home.

In fact, until Dec. 17, the day she died at 75, Marshall was working on a film about Rodman, a documentary that could still become the closing entry to a groundbreaking filmography that includes Big and A League of Their Own. “She phoned that morning,” says Matthew Conlan, Marshall’s son-in-law, a producer on the film. “She said, ‘What are we doing with Rodman? We’ve got work to do!’?”

Marshall had been making the movie since 2012, after Rodman, who had been sporadically shooting a doc with another filmmaker, asked her to take over. A longtime NBA?fan, she had struck up a courtside friendship with the former power forward in the 1990s, while Rodman was playing with the Chicago Bulls (he used to call her “Miss Marshall”) and she was making films like The Preacher’s Wife. But by 2012, she had all but given up on directing. Her last turn behind the camera had been the 2001 Drew Barrymore rom-com Riding in Cars With Boys. Marshall was supposed to have directed 2005’s Cinderella Man, a boxing movie she’d planned for 10 years, but her friend Ron Howard ended up making it after she threw her hands up over casting disagreements with Universal. “She really wanted Russell Crowe but the studio kept telling her Ben Affleck,” recalls Conlan. “Then, of course, after Ron Howard becomes director, Gladiator comes out and all of a sudden the studio wants Russell Crowe.”

But Marshall was worried about her friend — during that period, Rodman, now 57, had been drinking heavily and showing up for TV appearances intoxicated — and decided to accept the offer to direct?his doc, if for no other reason than to keep an eye on him. “She always said she was addicted to crazy,” says Russell LaFreniere, the film’s first director, who became?a producer after Marshall took over. “I think she saw a little of herself in Dennis — she’d been through difficult times, too. She really cared about him. And once she came onto the movie, it opened doors. She could call Mark Cuban and he’d come over for an interview — that wasn’t something I could do.” 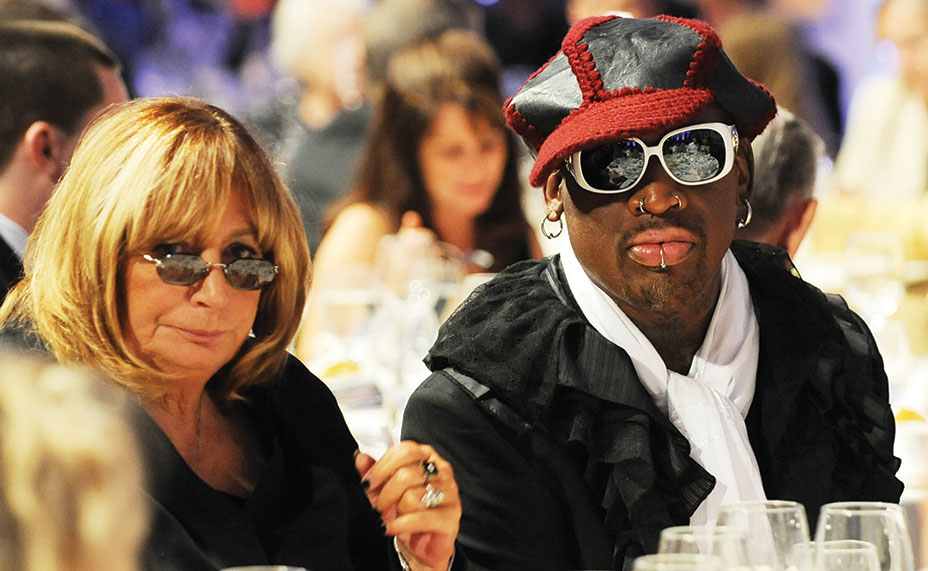 Off and on over the next four years, Marshall shot?hundreds of hours of interviews with scores of Rodman friends and associates — along with Cuban, she corralled Jay Leno, Isiah Thomas, Phil Jackson, even Donald Trump (“before he was commander in chief,” notes Conlan) — with her inimitable off-camera voice asking questions like, “If you could say one thing to Dennis, what would you tell him?” She brought in editor Keita Ideno, who waded through mountains of footage. “Penny didn’t want to just make a movie about this crazy guy who flew to North Korea,” he recalls. “She wanted people to know who Dennis Rodman really was. But then, at a certain point, they couldn’t pay us anymore. So they put the movie on hold.”

Conlan had raised hundreds of thousands of dollars to keep his mother-in-law’s cameras turning, but the project would require a lot more (at one point, its projected budget was $2.5 million). And the deaths in 2016 of her brother, Garry Marshall, and best friend, Carrie Fisher, slowed progress. Then Marshall’s own health began to turn in her battle with diabetes and cardiovascular disease.

According to Conlan, Marshall’s last film will get finished, maybe in time for the September release listed on?IMDb. Interest in the project spiked in the days following her death. As for Rodman — who did not respond to THR‘s?interview requests — being the subject of Marshall’s final film could be his biggest break since his other pal became president. “Icon to the world,” Rodman posted on Twitter the day Marshall died, “but a good friend to me.”

Penny Marshall: 11 of Her Most Memorable Films and TV Shows

This story appears in the Jan. 4 issue of The Hollywood Reporter magazine. To receive the magazine, click here to subscribe.