The Philipp Plein show — the third that the German designer has staged at New York Fashion Week — has come and gone, and luckily all have survived.

Staged as what might be interpreted as a bougie alternative to the Winter Olympics Opening Ceremony (models carried skis and snowboards down the “snow”-covered runway), the show certainly left us with a lot to ponder, but not necessarily in a cerebral way.

Read on for the full rundown.

The first thing that greeted guests at Philipp Plein’s fall 2018 fashion blowout, held inside a hangar at the Brooklyn Navy Yard on Saturday night, was a massive blue neon sign bearing the designer’s name.

The second assault on the senses was the heap of tin foil lumps, piled like so many discarded Chipotle burrito wrappers, stacked at least 20 feet tall in the shape of a faux mountain range. Scattered on the ground at the base of said foil mountain as well as across the rest of the venue, was a powdery white “snow” that was cast blue under the black lights and felt spongy underfoot. 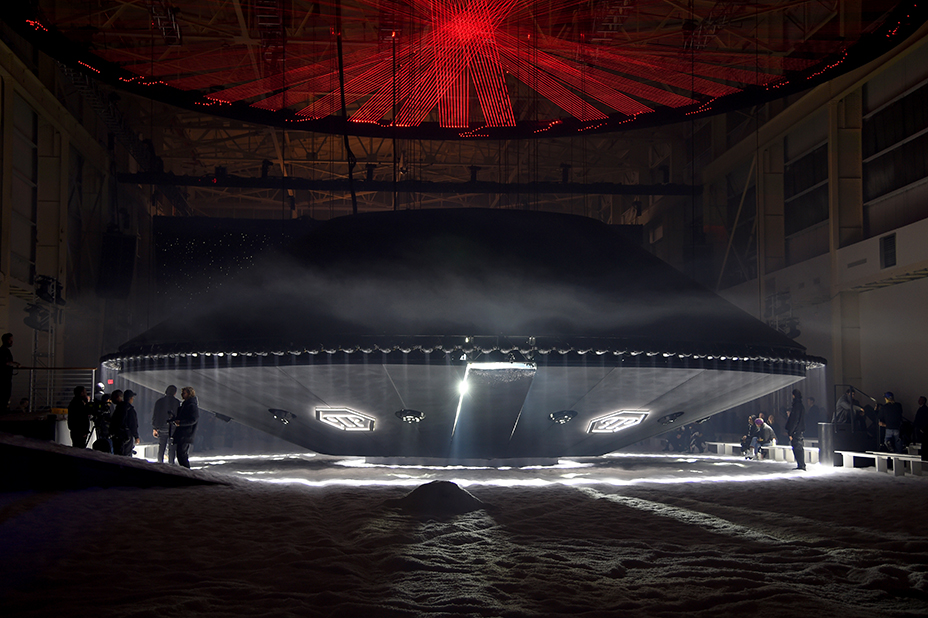 Ah, yes. For fall 2018, it seemed, Plein was taking us on a ski trip — but this was not your typical winter wonderland. That much was made clear when, looking up, I realized a full-scale UFO saucer (or what I’m assuming is full-scale, as I’ve never seen a UFO IRL that I’m aware of) suspended from the ceiling. This installation is what I’d like to call curious object No. 1. What did a UFO have to do with our snow vacay? Had we arrived not in Aspen or the Swiss Alps but another planet altogether? Who knows!

No Madonna, Tiffany Trump or Kylie Jenner this time. After the obligatory B-list celebrities (Kate Upton, Victoria Justice, Kim K groupie — er, bestie — Jonathan Cheban) filed in and took their seats, and the other reported 1,500 guests also settled in, the, um, fun began.

The Worst Fake Snow Is Any Fake Snow

First came more “snow,” which was just suds falling from the ceiling and landing ungracefully on clothing and handbags which I’m sure were not snow-machine proofed prior to this evening. The crowd (but especially me) was not enthused. A few guests popped their umbrellas, which were still wet from the evening’s drizzle, while another diffused the soured mood by yelling, “It’s tide pods!” Soon, the audience ceased griping and conceded to the fact that the price for the impending show was to be coated in sticky white film.

Next, a “snow plow” burst through the tin foil — I mean, mountain — making way for two “snowmobiles” (motorcycles covered in the Plein logo) that raced out of the gate in circles. In case you’re wondering, yes, Rihanna did it better.

If we embrace the idea that we had indeed landed on Philipp Plein’s planet, then the first sign of life encountered was suave musical trio Migos, who burst out of the hole created by the plow and dazzled the crowd by running and skipping and jumping, attempting to give each corner of the vast space a picture-perfect moment. The black light, unfortunately ruined most quality photo ops.

When Migos filed back into the hole from whence they came, the crowd was treated to curious object No. 2: a Transformer-like robot who trotted out onto the runway while an animatronic voice regaled, “Are you wearing Philipp Plein? You look great.”

Just when we thought the robot’s victory lap was over, model Irina Shayk, clad in a black catsuit and stilettos, grabbed him (could have been a “her,” just projecting here) by the “arm” and led him on yet another tour across the hangar. This time, the chorus to Frank Sinatra’s “Fly Me to the Moon” played on a loop. (Are we on the moon?? Are there robots and snow on the moon?? What’s going on??) 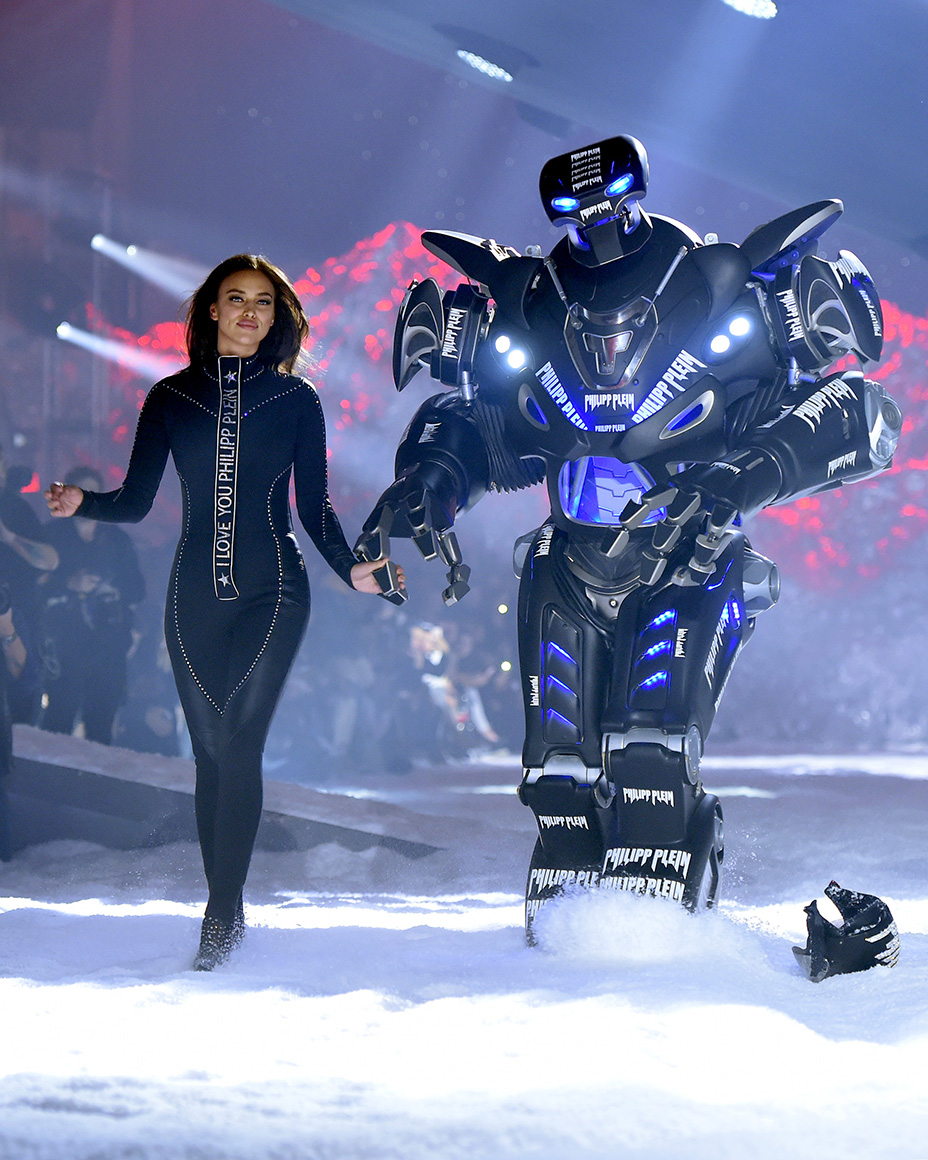 Meanwhile, the UFO began spitting steam as it lowered from the ceiling. Lights flashed about the perimeter and red lasers shot across the room.

Finally, after the Plein bot and its escort finished the tour de Navy Yard hangar and the UFO was suspended roughly 12 feet from the ground, the models began their parade. 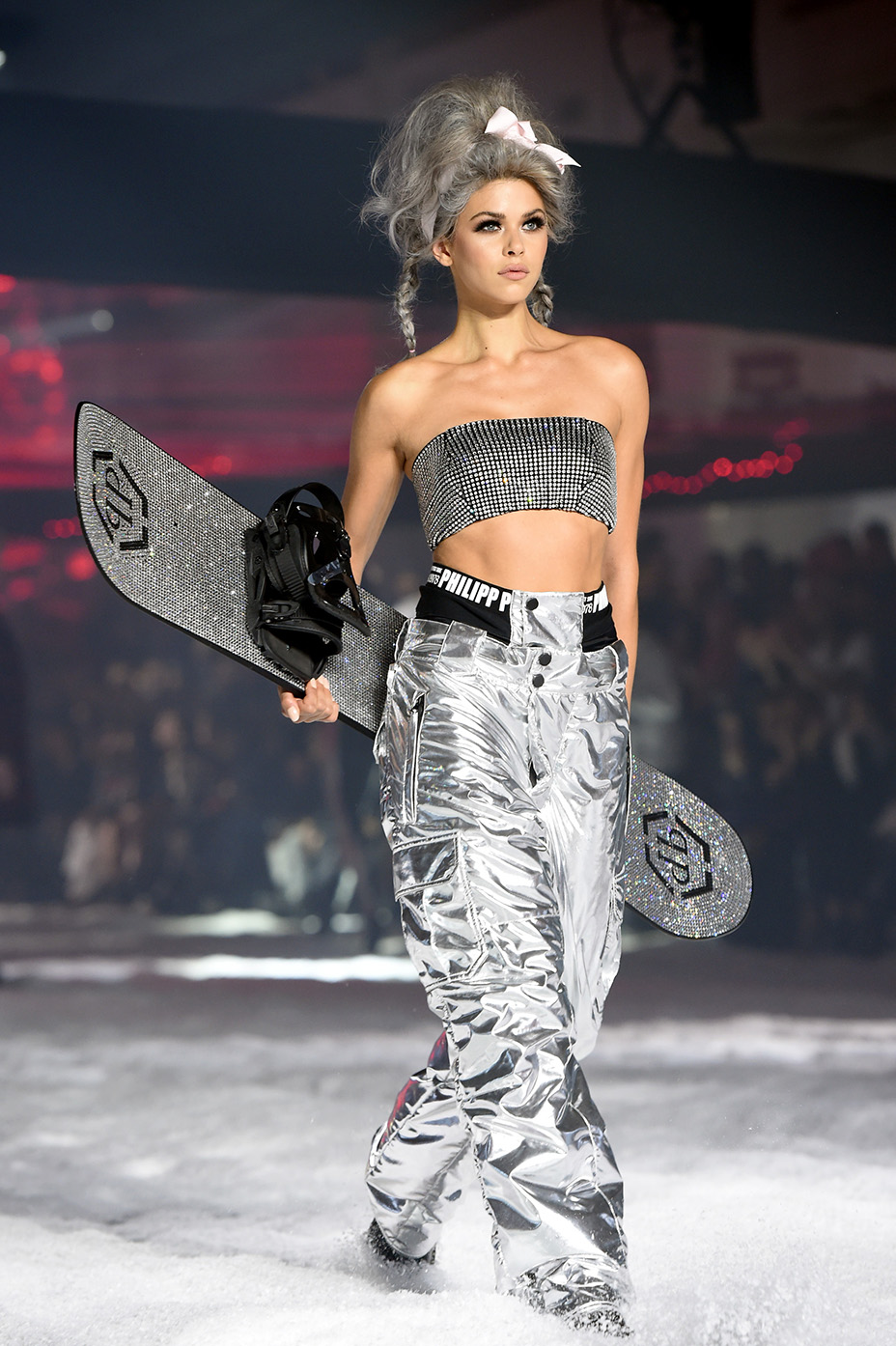 Men were also subjected to an inordinate amount of crystals, which covered track suits and saggy ski pants. Some ensembles were accessorized with actual skis and snowboards and styled sans shirt, because maybe it’s not actually that cold on Planet Plein.

Curious object No. 3 came by way of a Playboy homage, with vintage covers plastered on hoodies, while the bunny logo was printed on puffer coats and bedazzled face masks. 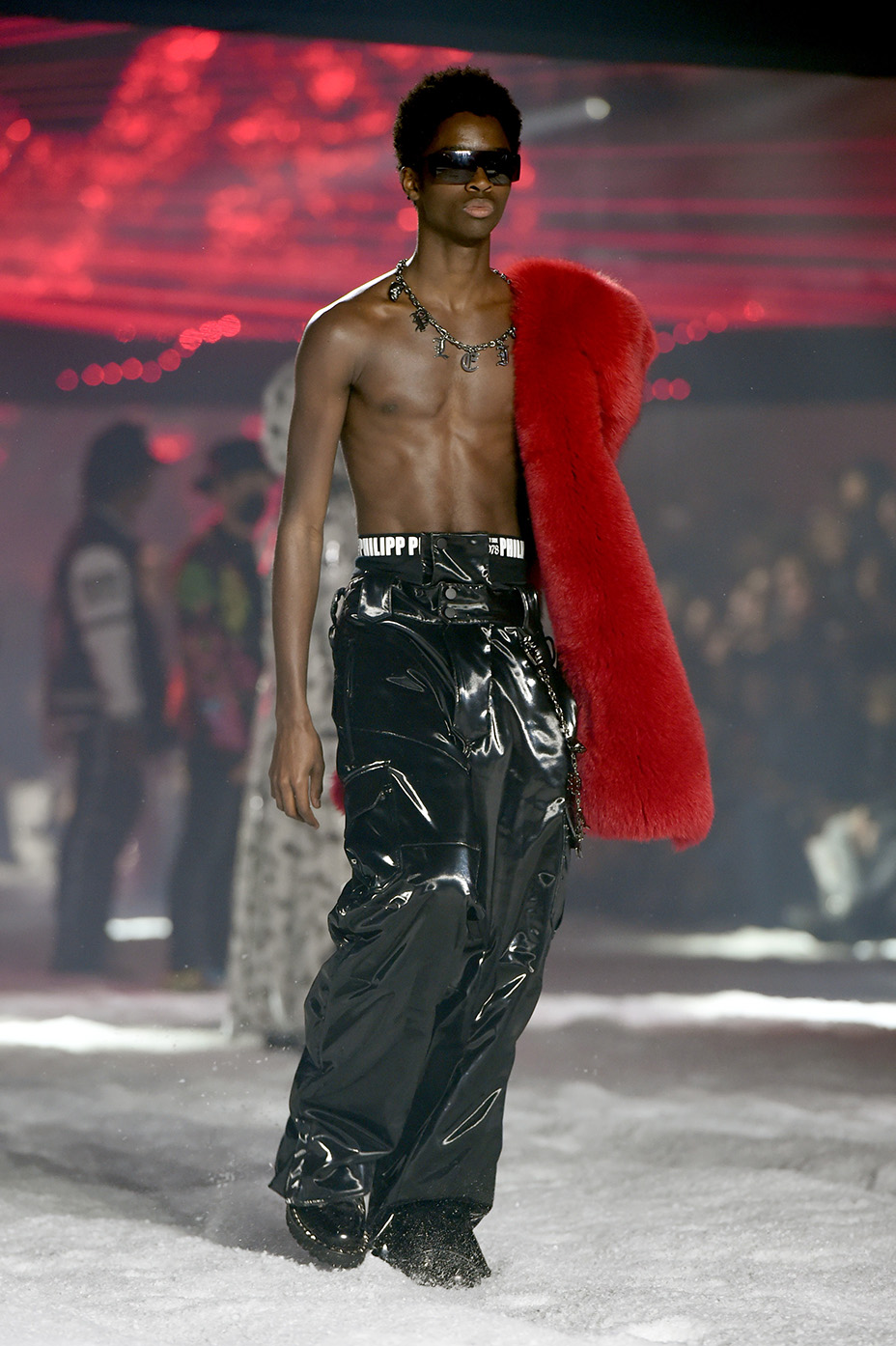 Models (aka Snoop Dogg’s Son Was There)

After all the models — including Soo Joo Park, Snoop Dogg’s son Cordell Broadus and hijab-wearing model Halima Aden — completed their walks, the models all gathered under the UFO, Plein emerged on the arm of Shayk for his bow, and Migos returned to sing their classic, “Bad and Boujee.”

Before the show began, whispers of the cost were floated around. “For spending $10 million dollars on the show, you’d think they’d have bathrooms indoors,” griped one unidentified front row guest for all to hear. “The last show was $7 [million],” he added, noting the popular guesstimate floated by several outlets. “That [points to UFO] was not cheap.”

The snow plows, snowmobiles, set and afterparty supplies certainly contributed to the cost, as did the celeb-heavy front row, Migos‘ performance and the hefty security detail employed to keep guests in line and uninvited crashers (who arrived fewer in number than at last year’s show in Midtown, but in hordes nonetheless) out.

My chariot to the Philipp Plein show pic.twitter.com/VVYgDf6KcU

Transportation by way of complementary ferry rides and a bus shuttle also likely added a few zeros to the cost, as did curious object No. 4: an unexplained display of Bugattis parked outside in the rain under a spotlight. I’ve run out of guesses for that one, to be honest.

All in all, for a Plein show at least, the experience was relatively tame. The event kicked off roughly an hour after the scheduled 9 p.m. call time, and wrapped up quickly sans grand speeches from Plein or models getting lost on the runway, which really did happen when the designer showed his collection at the New York Public Library last winter.

That being said, the celebrity crowd and modeling ensemble was noticeably thinner than years past, and I have to take off extra points for the foam, which should be absolutely outlawed, in my opinion.

Oh, and the clothes only reminded me of the ancient male-female power dynamic which feminists are trying to deconstruct. But no one goes to a Plein show for the clothes anyway, right?