Italian director Matteo Garrone’s Pinocchio is not the sunny, cheery cartoon tale of your childhood memories. The Gomorrah auteur’s darker, yet thrillingly fantastical adaptation remains true to Carlo Collodi’s The Adventures of Pinocchio, which began as a weekly series of cautionary children’s tales set in the impoverished Tuscan countryside. Costume designer Massimo Cantini Parrini, who just received his first Academy Award nomination for the film, also walks the line of spectacular realism for the age-old story of the mischievous sentient puppet (Federico Ielapi), carved by lonely carpenter Geppetto (Roberto Benigni).

“The watchword was ‘truth,’ ” explains Rome-based Cantini Parrini, over email, about Garrone’s vision for the film. For inspiration, the costume designer began by studying the novel’s first-edition illustrations by Enrico Mazzanti and the 1901 iterations by Florentine designer Carlo Chiostri, whose drawings portrayed the economic realities of late 19th century Tuscany. A museum buff, Cantini Parrini also researched photographs capturing the era’s quotidian life and the mid-1800s Macchiaioli artistic movement, which focused on natural color, light and shadow. The costume designer’s “very long and complex” historical documentation process also involved sources close to home (and his heart): his private collection of vintage dating back to 1630. “I own more than 4,000 antique clothes.”

Pinocchio set holiday box office records in Italy, while debuting quietly in the U.S. on Dec. 25 to critical acclaim. The Academy costume design branch took notice, recognizing Cantini Parrini’s work alongside such multiple Oscar-nominated and -winning designers as Alexandra Byrne for Emma and Ann Roth for Ma Rainey’s Black Bottom. The nod was a surprise to the designer, especially because he didn’t realize the nominations were being announced until a barrage of texts blew up his phone, along with an unknown caller screaming, “Oscar! Oscar!” “For us Italians, it is very important,” says a still stunned Cantini Parrini. “It is the most coveted film award in the world.” 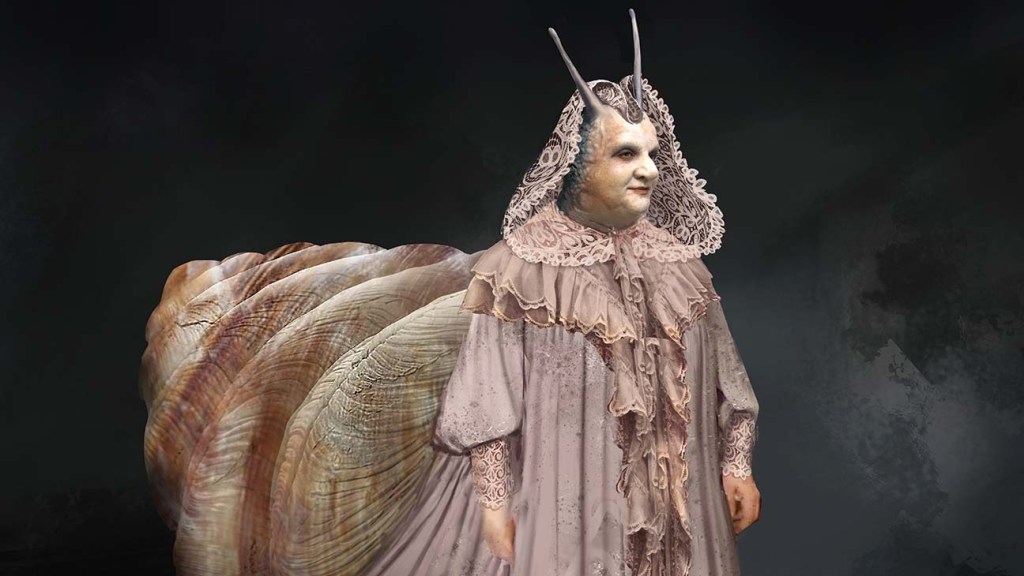 After barely escaping from the clutches of a scam, Pinocchio finds sanctuary in the “ghost house,” presided over by the grandmotherly Lumaca. She’s a specter existing in a timeless purgatory, but her puff-sleeve and lace-trimmed house dress, embroidered bonnet and fringed shawl reflect the “chamber clothes” worn in the 19th century. Cantini Parrini designed the knit wrap from recycled materials found in Prato, Tuscany. “There are so many pieces of fabric assembled together that I wanted to look like they were crocheted,” he says. “For me the three-dimensionality in a costume is very imposing. I don’t like fabrics without a soul.” The layered robe illustrates Lumaca’s weariness of infinite afterlife existence. Her soft mauve palette conveys “calm and serenity” that Pinocchio seeks. For ease and efficiency for the actor, Cantini Parrini designed Lumaca’s robe as a single piece, but with “a lot of hooks” to nimbly affix to the shell.

“I dressed Geppetto with very old clothes to underline the fact of his poverty. As if he had found everything in old chests — thrown away or forgotten — and didn’t have the economic possibilities to afford a fashionable tailor,” explains Cantini Parrini. He designed Geppetto’s distressed tailcoat and threadbare linen vest based on 18th century pieces from his own archives.

In exchange for a schoolbook for the unruly Pinocchio, a penniless Geppetto offers the jacket and waistcoat, which are supposedly hundreds of years old and passed down from “marchesa’s grandpa’s grandpa” — or so the carpenter hustles. “A story naturally invented by Geppetto to make the clothes acquire even more value,” says Cantini Parrini, also pointing out the historical style accuracy. “Popular Tuscan costumes in the 1800s still strongly reflect the style of 18th century dress.” 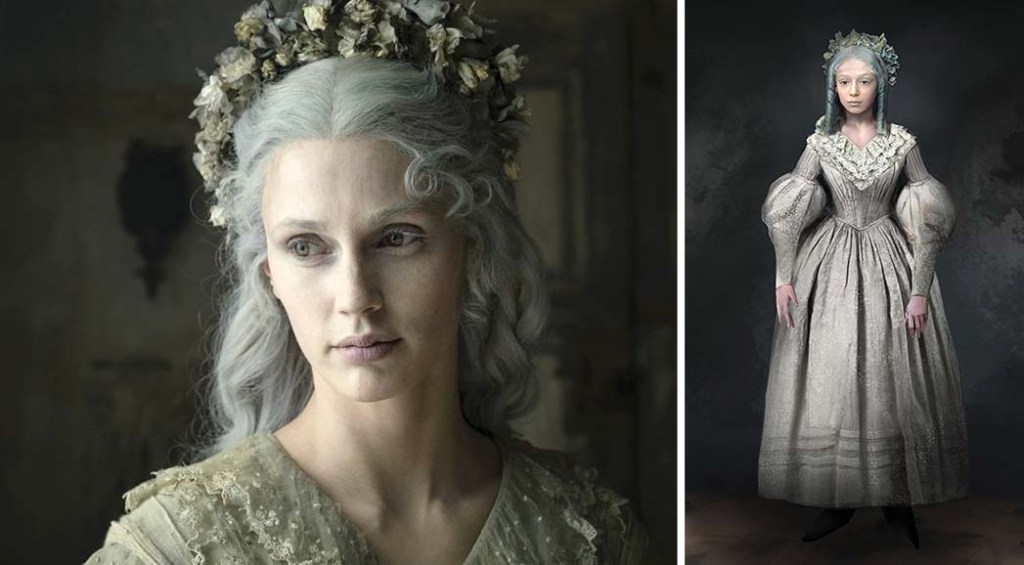 Along with the Lumaca, the Fata Turchina (Fairy With the Turquoise Hair) helps Pinocchio along the way — first as a young girl (Alida Baldari Calabria) and later as a grown woman (Marine Vacth). Both versions of the Lumaca are recognizable to Pinocchio and viewers; she wears the same wilted flower crown, framing her tumbling blue curls, and a hauntingly time-worn gown in a specific, yet also vague, hue. “The world of the Fairy is a suspended world, between the living and the dead,” explains Cantini Parrini. “This silvery and translucent color that I gave to the Fata Turchina’s costumes represented the limbo where the Fairy and Pinocchio meet.” Her uncertain state also allowed Cantini Parrini a bit of creative license. He stepped back from late 19th century style into the early Romantic Period “of 1830 to 1835” with details, such as, the billowing gigot sleeves, sculptural wide skirt hemline and V-shape neckline. He also innovatively incorporated medical cotton gauze with lace, sourced in London, to create the ethereally battered trims. “She was not fashionable because she was long dead,” says Cantini Parrini. “Also, because, as you know, fashion marks the passage of time.”

Pinocchio ditches school for a traveling theater show and is enchanted by his fellow puppets performing. Cantini Parrini designed the marionette costumes based on stock characters in commedia dell’arte, Italian masked comedy theater popular in the 18th century. The lively crew, including the colorful, clownish Arlecchino (Harlequin) and the captivating Rosaura invite Pinocchio onto the stage — kicking off one of his many misadventures. “A lot of work has been done on these costumes,” says Cantini Parrini, who imaginatively established a backstory: Marionette theater costume designers sewed fabric from “vintage dresses” to create the elaborate ensembles.

Garrone employed minimal CG and preferred prosthetics and physical special effects, including for real actors playing the puppets. So Cantini Parrini’s costume design required seamless coordination with two-time Oscar-winning special effects makeup artist Mark Coulier, who also received a nomination. “We all did a lot of work together to decide on styles and colors,” says Cantini Parrini. With Garrone, he visited Coulier’s London studio to study the prosthetic work in progress, capture all the dimensions and understand the mechanics of the neck and hand attachments. “I had to make the costumes by measuring the actors with the prosthetics on, otherwise they would never fit into the costumes,” says Cantini Parrini. 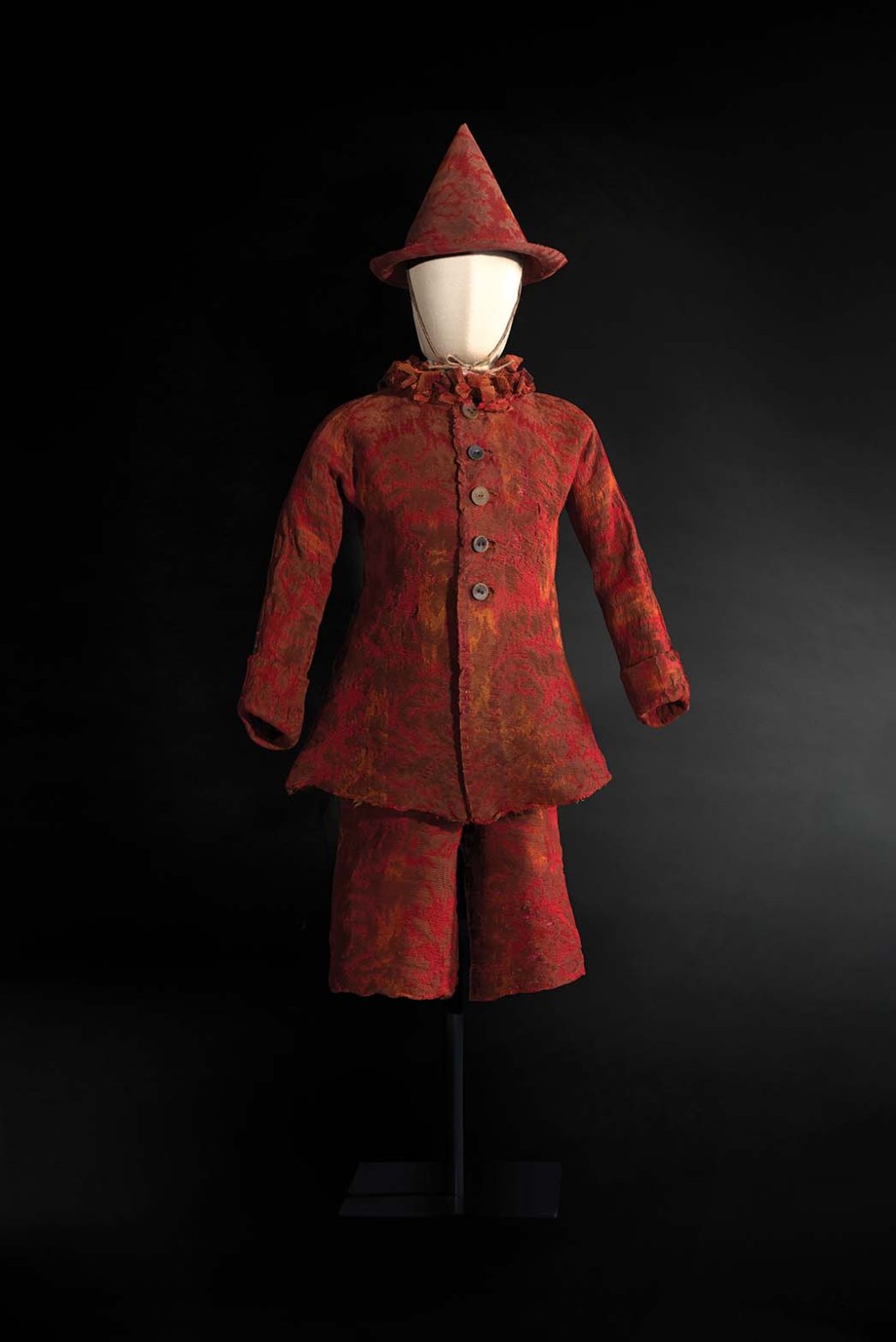 Collodi wrote that Geppetto fashioned Pinocchio’s suit from paper and his pointed cap out of bread crumbs. But Garrone diverged from the source material for practical shooting needs — and logic. “Because Geppetto, being so poor, maybe he would have eaten [the hat],” says Cantini Parrini. “In the end, we decided that Geppetto would sacrifice the only blanket he has on the bed to make the suit for his ‘baby.’ ” The faded autumnal jacquard bed cover emphasizes Geppetto’s frugality. “An ancient blanket, also found who knows where,” says Cantini Parrini. The red palette catches the audience’s eye and contrasts with the muted earth tones worn by the villagers. The bold color also “encompasses all the feelings of the world: love, anger, jealousy, envy, hope, wickedness, lies, etc,” he continues. “Feelings that are hidden in the soul of Pinocchio.”

“The work on the costume and the blanket was very long,” says Cantini Parrini. “The aging and the mending required many weeks of work, also because we had three multiple blankets to make and eight multiples for the clothes.”