The Pitches are returning for another riff-off in Pitch Perfect 3.

Much like the previous two installments, Pitch Perfect 3 is just as glittery and sparkly as you’d expect. Costume designer Salvador Perez, who has been part of the crew since the original 2012 film, was once again tasked with bringing out the bling.

“I’ve been working with these girls for seven years, so I know their likes and dislikes. I was able to play into that in dressing them,” Perez tells The Hollywood Reporter, adding that Sie’s vision included having “color everywhere.” 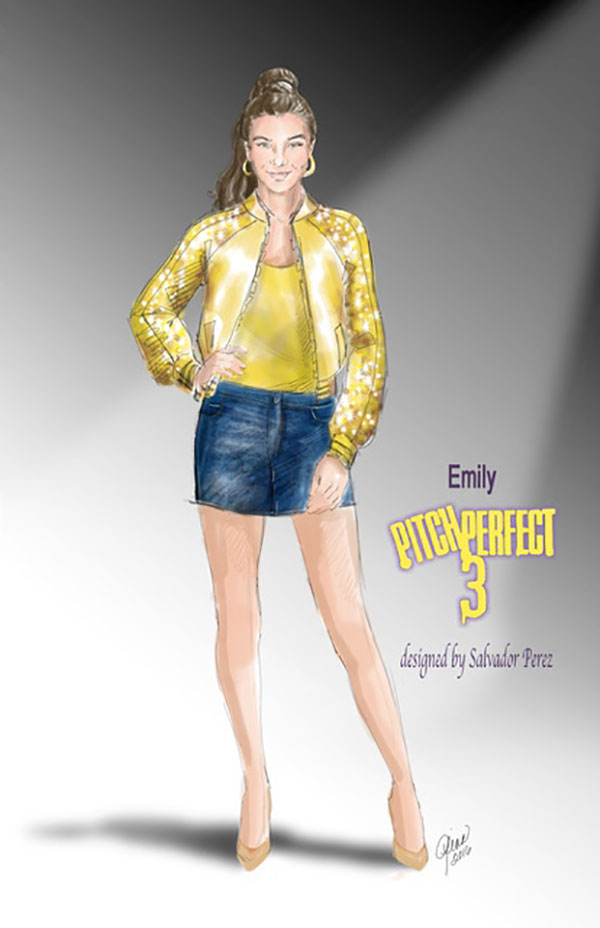 The new film sees the Bellas reuniting in their original uniforms, thinking they’re getting together to sing again, but as it turns out, they’ve only been invited to watch Emily and her vibrant new a capella group, who are all decked out in glittery gold outfits, perform.

“We wanted to them to look differently than the old Bellas, and also we were shooting in that really dark blue aquarium, so there needed to be more color and sparkle,” says Perez. “I found that gold fabric with sequins and made those jackets. For the t-shirts, I was shopping in the clearance section at Guess and they had those matching t-shirts, so I was like this is perfect.” Perez paired the shimmery outfit with Ann Taylor chain belts, Paige denim and glitter gold shoes from Kate Spade for Keds.

Rather than create new uniforms for the Bellas, “all those girls are wearing their original Bella suits from Pitch Perfect, and they were a little sad and beat up, but I thought, ‘That’s OK,’ because they’re supposed to be five years old,” says Perez, who adds that he screamed when he realized that the studio had saved the clothes. 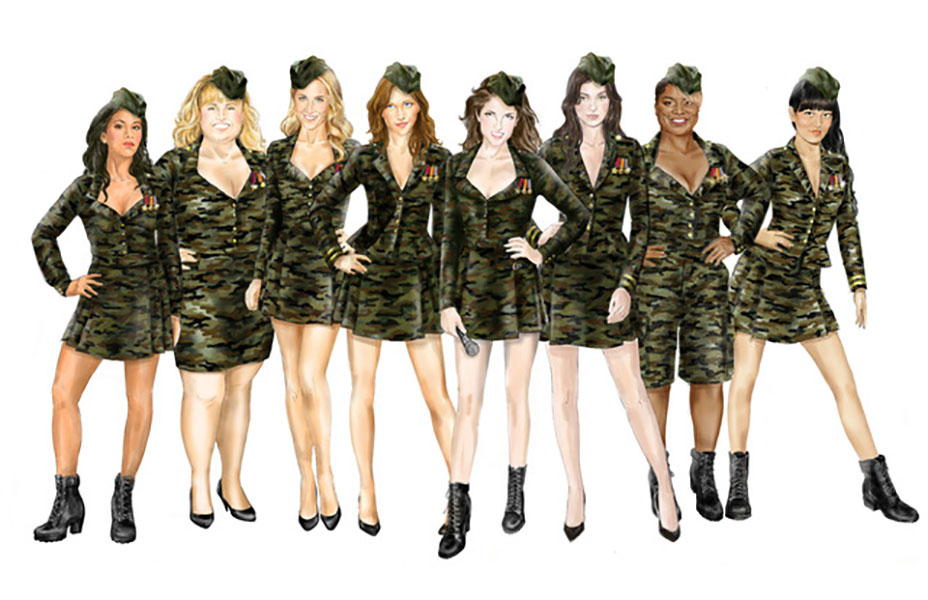 Perez also made the ladies shine with Swarovski crystals. “I customized all those camouflage looks for them and covered everything in Swarovski crystals,” says the costume designer of the Bellas‘ new performance wardrobe, which also includes sailor uniforms. “We put it on every surface possible.” Perez says that the clothes featured so many crystals there were “three costumers doing nothing but crystallizing for eight weeks.” Leaving no detail behind, he even crystallized the back of their pants with the letter “B” for, you guessed it, “Bellas.”

One of the biggest costume challenges was the casino scene, according to Perez. “I had to put 10 women in cocktail [outfits] — they all had to look different. I had to have multiples of six and seven because of the stunts,” he says, adding that he selected a BCBG jumpsuit for Beca and a green cocktail dress for Chloe “that was cut off a gown because I loved that color green, but couldn’t find a cocktail dress in that color.”

Perez also used pieces from Wilson’s collab with Angels to dress her character, including a silver sequin dress, green suede moto jacket and “Watch Me Take a Nap” t-shirt. “She was designing the line as we were shooting the movie, so she was showing me samples and I was like, ‘Can we use this jacket?’ and she was, like, ‘Sure,'” says Perez of pulling from the Rebel Wilson x Angels collection. “I wanted to honor her, because why not. They were perfect.” 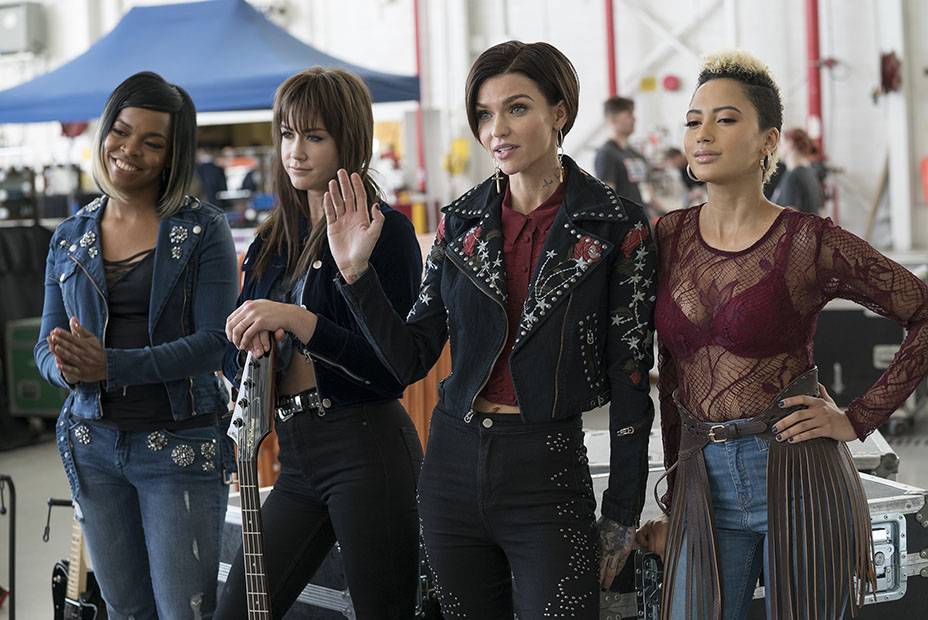 Opposite the Bellas was Calamity, played by Ruby Rose, whose style was much more rock ‘n’ roll. “I was sort of doing the female version of Lenny Kravitz. I wanted her to be a rock goddess,” explains Perez, who outfitted Rose’s character in a Seven for All Mankind black velvet suit with gold prints (“It was my favorite piece because it was so lavish”) for her band’s USO open performance and a True Religion moto jacket with studs and embroidered roses during rehearsals.

For the closing number, Perez dressed the ladies to make them look more “individual as opposed to a group,” especially Beca, who stood out in gold while everyone one else was decked out in various silhouettes of black.

“She’s performing and the girls were audience members, so what the director said was, ‘I want her to pop from them, and I want the girls to come onstage and stay in the background,'” says Perez. He styled Beca in a Bebe gold jacket, tank top from Nordstrom’s BP line, Haute Hippie skirt and Steven Madden boots, which were originally going to be burgundy instead of a champagne gold.

“The boots were a literal last-minute change,” recalls Perez. “Anna was, like, ‘Sal, these boots are uncomfortable, I can’t stand in them for that long.’ I race out to the trailer and luckily most of the girls are size 7, so I had all kinds of shoes as backups. Those shoes were on sale for, like, $29 at Steve Madden.” Aca-awesome. 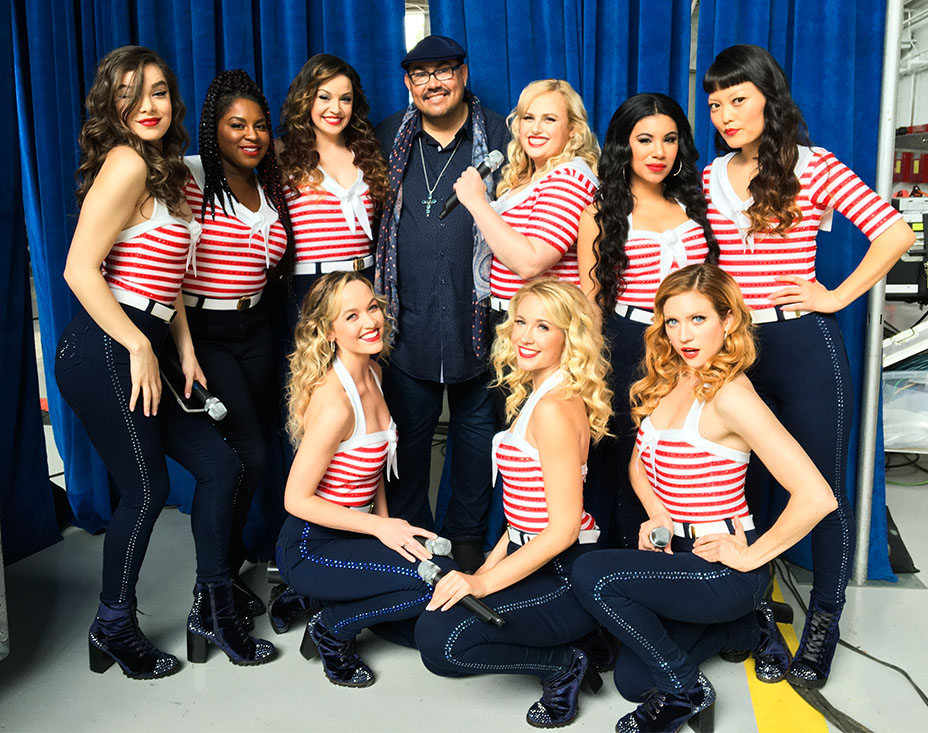