There’s been a strong undercurrent of female empowerment on the runways so far this season, as designers attempt to redefine fashion in the time of #MeToo feminism. For male designers, it can be tricky to project authenticity in this political moment. Hence, we’ve seen “Pussy Power” handbags at Tom Ford, and a female CEO-themed collection from Alexander Wang.

Nepalese-American designer Prabal Gurung is one who has convincingly stepped into a feminist role, inspired by last year’s Women’s March to put slogan tees on his runway in February, welcoming Gloria Steinem to his show in September, and becoming a leading voice on inclusiveness in fashion, which has made his brand a popular choice on the red carpet this awards season with Tracee Ellis Ross, Issa Rae, Kerry Washington and more.

Who Are The Fashion Winners (and Losers) of the New Woke Red Carpet?

For material for his fall 2018 collection show Sunday at New York Fashion Week, he drew on the strong women from his own background: his single mom, who raised him on her own in Nepal, and those who guided him across rough terrain on his cross-cultural journey to America, including the matrilineal Mosuo tribe in the Yunnan province of China, and in the Bundelkhand of India, female activists who wear pink saris as a symbol of power.

Opening with Gigi Hadid, his runway show played out in living color — vivid hues of pinks, reds, golds and blues that were a stark contrast to the Time’s Up protests that have put women in all-black on the red carpet in Hollywood and in the U.S. Capitol during the State of the Union, drawing attention to them in one way, but perhaps visually blotting them out in another.

“I simply wanted to offer another perspective, another option, because at the end of the day, my job as a designer is to provide choices so that women can interpret their femininity as they see fit,” Gurung said. “And doing so in vibrant, optimistic colours makes me hopeful for the future.”

Woven throughout Gurung’s clothes were the traditions of thousands of years of female handiwork — hand- cut fringe, artful draping, paillette embroidery and sturdy, yet soft knits, all of which add texture to life.

The look was utility combined with grace — a Nepal-inspired chunky knit pink ombre sweater with pink plaid cargo pants, for example, and a deliciously cozy red cable-knit turtleneck sweater dress decorated with whimsical ostrich feathers which will be one of the fall season’s must-haves. 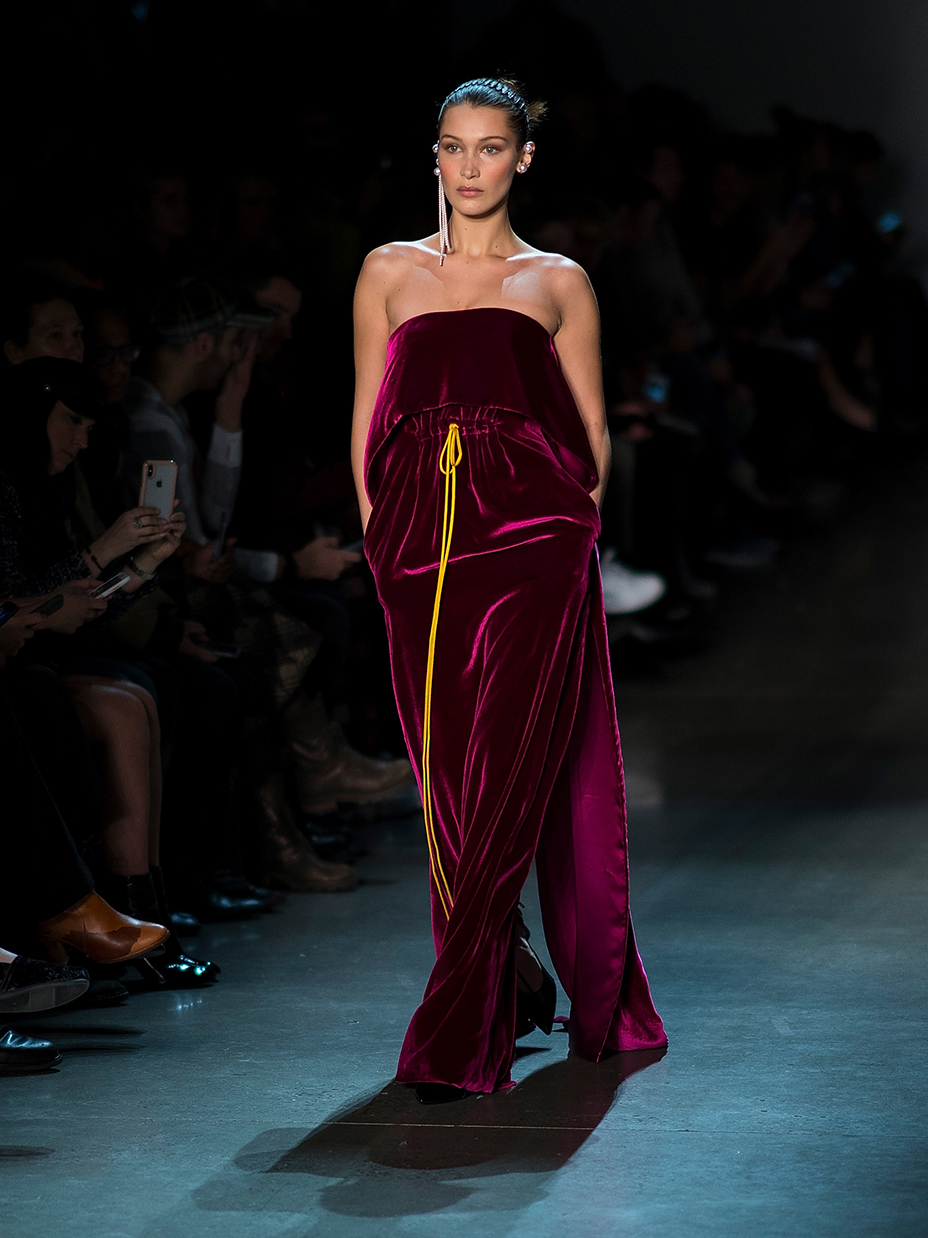 Evening wear had a new egalitarian ease, namely a red velvet strapless cape-back gown cinched with a gold cord belt that looked as comfy as a pair of sweats; a red-and-pink tunic draped, sari-style, over full pants; and his now signature angel-sleeve dress (a knockout on any size), cut in shimmering gold velvet. For a finale, Gurung staged his own silent women’s march, a quiet display of force without any musical accompaniment, just color and style.

Brandon Maxwell, the designer who rose to prominence as the stylist to Lady Gaga, seems to draw his strength from model muses like Gigi and Bella Hadid and Karlie Kloss. He set his show in the stunning Appel Room auditorium at the Time Warner Center overlooking Central Park, with the lights of New York at the models’ feet. 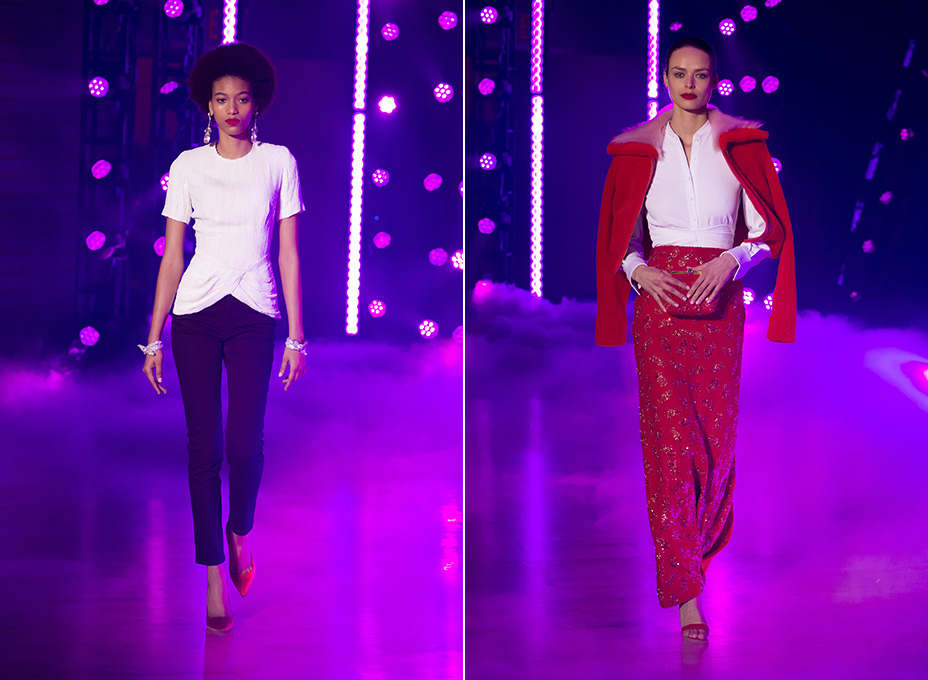 Guests sat in auditorium seats and watched as his muses ascended the stairs, dressed in Maxwell’s vision of casual meets couture: a draped white sequined top as easy as a T-shirt over black cigarette pants; a fire engine red embroidered evening skirt with white button-down shirt and shoulder-robed red shearling bomber jacket; and a black hoodie over a fairytale tulle ball skirt. It felt right for right now, not like a man’s fashion ideal, but a woman’s.

Perhaps the purest expression of feminism in fashion is function, the mother of invention, and dressing for yourself, not the male gaze. That came to mind at Victoria Beckham’s 10th-anniversary show, presented Sunday morning in the Upper East Side circa 1905 James Burden mansion (no big thing) that put the audience up close and personal with the collection in a lovely mirrored drawing room. 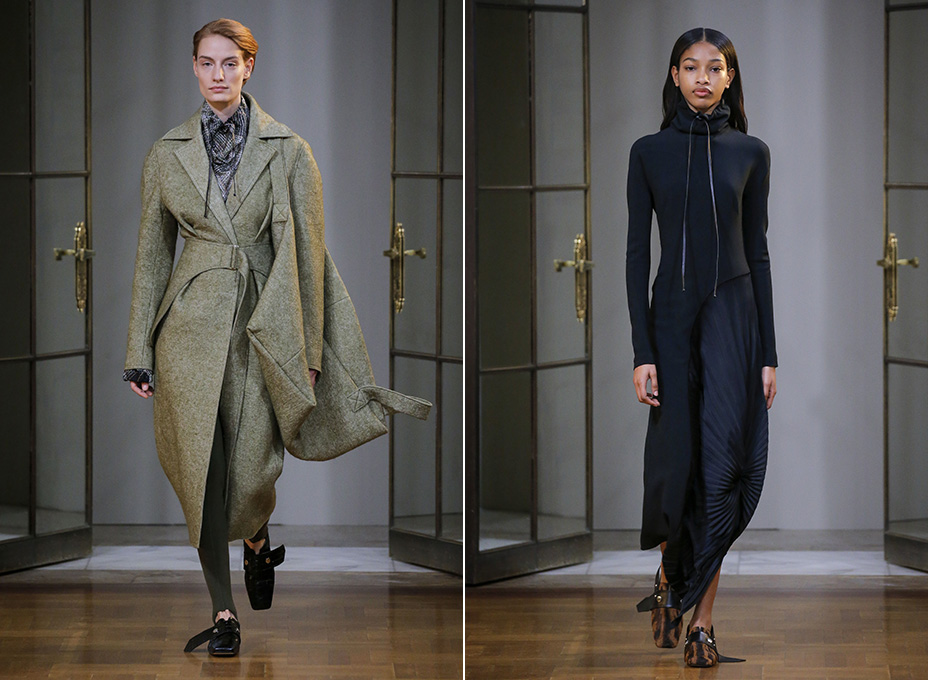 What made the collection soar was that the clothes were as convincing as ever in their purpose — to make the harried experience of getting dressed in the morning just a little bit easier, while at the same time trying to balance getting to work or shuffling kids off to school.

With finely tailored lines of utility jackets and ribbed knits tracing the contours of the female form, this was a collection that served women. Consider Beckham’s black hoodie dress, the kind of functional fashionable piece you want to live in every day. Or a moss-colored knit tunic, part hoodie, part draped cardigan, with a cutout over the shoulder that gives the style an extra punch without sacrificing comfort. Or the statement coat to end all, a long, lean, belted leopard-print chenille style that transcends fashion. 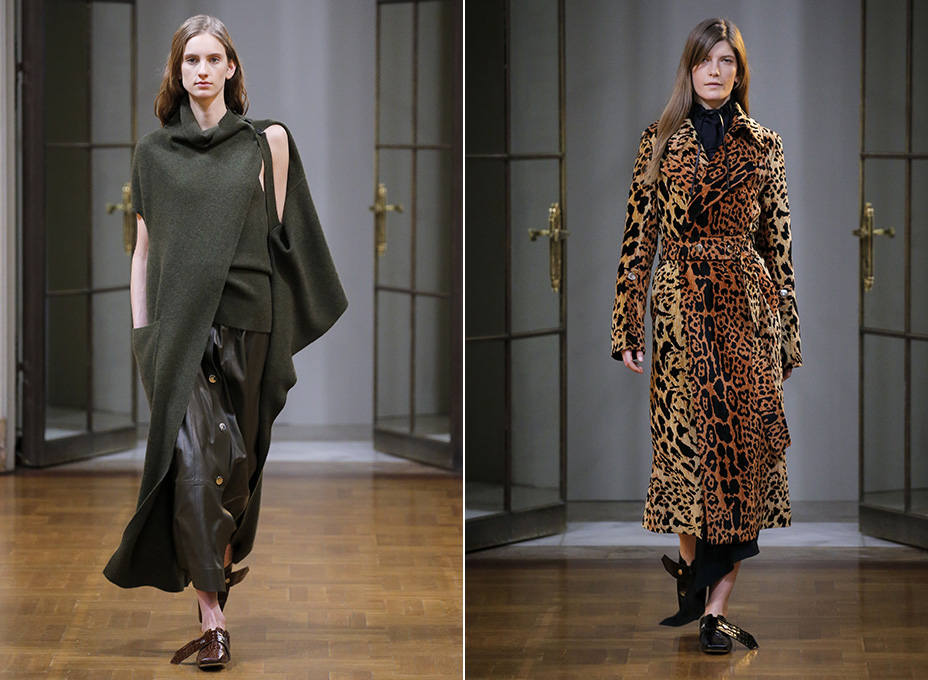 When Beckham took her bow, making a point to kiss each member of her doting family sitting in the front row — hunky husband David, kids Romeo, Cruz and Harper — you got the sense that even with all her celebrity and wealth, motherhood is a balancing act for her, too. It was a moment that felt authentic enough to buy into for another 10 years or more.