The auteur on Thursday night had a front row seat inside Echo Park’s Club Bahia, site of a monthly burlesque show inspired by his oeuvre and dedicated to a stable of powerful female characters. It’s a melange of burlesque, striptease, acrobatics and circus theatrics, and each performance is complemented by costumes and props inspired by Tarantino works (and a few from friend and frequent collaborator Robert Rodriguez) and backed by songs from the respective soundtracks.

Tarantina: Hollywood 1969, the Un-Official Quentin Tarantino Cabaret, presented by Fatale Factory, was created by Tosca Rivola, a performance artist, producer, gymnastics champion and entrepreneur. It had previously posted up at downtown Los Angeles’ Belasco Theater since January before moving in recent weeks to Club Bahia. When The Hollywood Reporter attended the July performance, Tarantino was expected that night — a sofa was even on reserve — but he didn’t show. However, nobody could blame him considering his latest film, Once Upon a Time in Hollywood, was released just days later on July 26.

But there he was Thursday night, claiming a spot on one of those red leather sofas right up front where he was joined by friend and fellow filmmaker Eli Roth. The energy in the intimate venue — roughly 300 people with a standing-room only section — was electric as Tarantino’s presence was announced from the stage by host Miss Emma, who frequently referred to the filmmaker as “Daddy.” 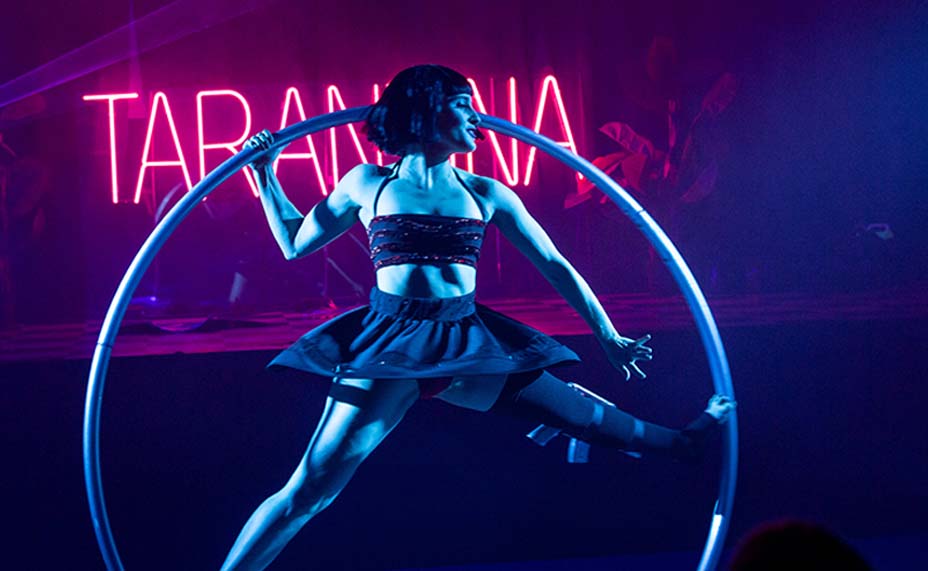 “I just want to remind you that he is here to see me and these bevy of beauties that we have back here just chomping here at the bit to come out here and show him what we’re made of,” she said with a purr before following it up with a quick hiss to keep the peace. “He is not here to take a selfie with you, so don’t do it. Don’t do it. You may gaze lovingly at him from across the room and I’m sure he’ll know in his heart of hearts what you really mean to say is that you love all his films … and just shut up. Don’t do it, OK?”

It appeared that the crowd heard the warning loud and clear as Tarantino was able to sit back, relax and enjoy the show. It kicked off with a burlesque romp to a song from From Dusk Till Dawn, a film written by Tarantino and directed by Rodriguez. Tarantino and Roth were seen clapping throughout the opening number. “Quentin sat in plain view of most of the audience and was practically face-to-face with each performer on the ground-level stage, so the pressure was definitely on,” Rivola told THR on Friday. “It was a huge relief to me that from the very first act on he seemed to really be enjoying himself and emoting along with the acts — nodding, clapping, laughing, throwing his hands up. By the time my act came along in the second half of the show, I had a feeling it might go over well. He seemed to be quite drawn to the very specialized technical acts. I was very humbled to receive a standing ovation from Quentin and the rest of the audience after my act.”

The energy kept going courtesy of applause and multiple standing ovations through such numbers as a Grindhouse lap dance, a Sin City pole dance from performer Brynn Route and a Kill Bill-themed dance featuring a costumed O-Ren Ishii character who strutted across the stage and throughout the audience with a sword, disrobed and then fought The Bride, as in the film. Roth took a turn in the spotlight when he was chosen to go onstage for a special Jackie Brown dance with performer Kyla Carter, a local contortionist and style queen. “Don’t worry, no Elis were harmed in the making of this act,” Miss Emma announced to the audience after. She then asked Roth for his reaction and he had none to offer. “For the first time, I’m speechless,” he said. 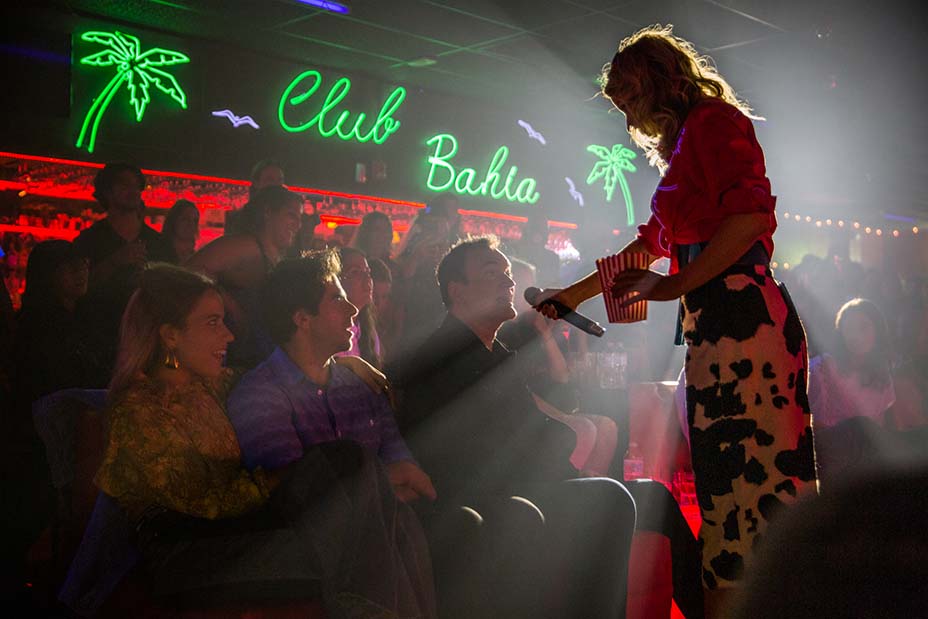 Another highlight of the night came during a True Romance number when a performer stepped into the shoes of Alabama Whitman, a character played by Patricia Arquette in the classic 1993 film written by Tarantino and directed by Tony Scott. Onstage, she was performed by Tarantina castmember Amy Hessler, who also introduced an audience participation moment, selecting Tarantino to answer a slew of questions, starting with his name (“Clarence,” he quipped, referencing Christian Slater’s character). She then asked for his turn-ons (“Raquel Welch movies”), and turn-offs (“shoulder pads”).

Said Rivola: “Quentin said he really appreciated our attention to detail with each character, and the fact that we made each song come alive in a way he had never experienced before. He did mention that it was one of the best live shows he had ever seen and that it really stirred something in him running lines as Clarence from True Romance with Amy Hessler.”

Other highlights: Tarantino got on his feet and led a standing ovation when Rivola performed a Planet Terror dance; and during an Inglourious Basterds number, the filmmaker was seen tapping his toes, clapping his hands and dancing along the entire time. A Sharon Tate-style performer (Donna Hood, one of L.A.’s top burlesque entertainers) did a dance to José Feliciano’s “California Dreamin’,” a track featured in Once Upon a Time in Hollywood; and Donna Hood, another featured a performer who was stabbed awake by a Swarovski-laden syringe reminiscent of the Mia Wallace character from Pulp Fiction. 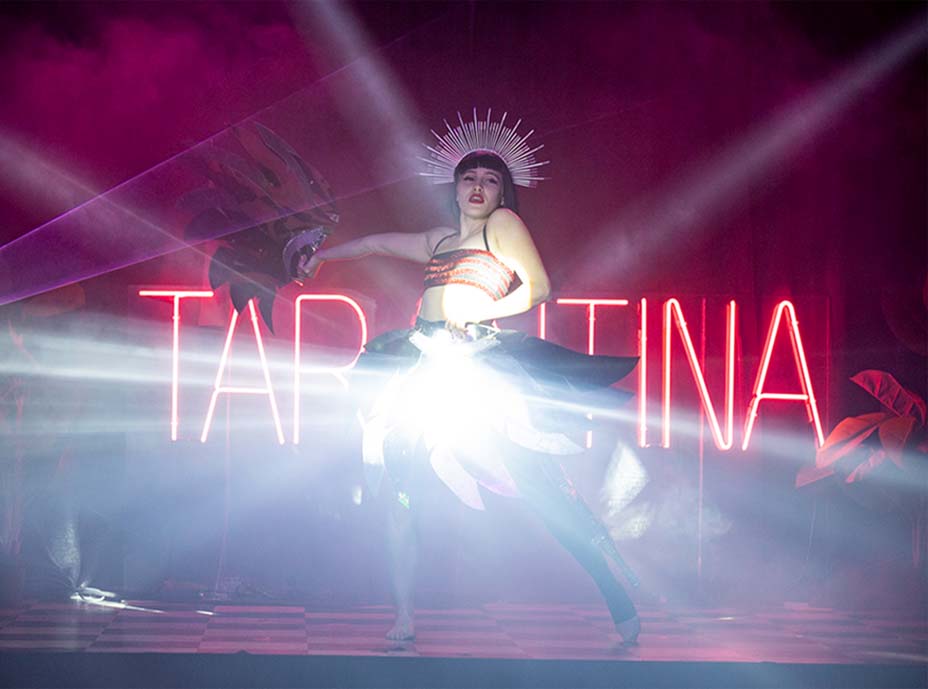 As for how to top Tarantino’s appearance, Rivola said she’s been approached about taking the show out on tour, but she’s still unsure because she loves Club Bahia. “I want to continue running this show at our home venue because it really feels like the people’s show — thrilling, affordable, intimate, unpretentious, I’d like to think. My goal is to work on ingraining the show further into L.A.’s cultural landscape, without excluding the possibility of a tour. Quentin’s presence at the show last night definitely helped validate and legitimize the show to hopefully more easily accomplish these goals.”