It’s hard not to be captivated as a bearded and shotgun-wielding John Krasinski ascends the stairs, wide-eyed and attuned to every shift in his surroundings as he makes his way past the claw marks on the wall and up to his pregnant wife with bated breath, hoping that she’s still alive. Part of that captivation comes from the scenario of A Quiet Place, a world beset by creatures that hunt you if they hear you. But another part comes from the fact that this world-weary, fearful portrayal of Lee Abbott by Krasinski shares a screen presence closer to Tom Skerritt or Roy Scheider than the affable everyman of indie dramedies that we’ve come to know him as. A Quiet Place, which Krasinski directed, co-wrote and stars in alongside his wife, Emily Blunt, loudly announces the emergence of a necessary screen presence — and a new voice within the horror genre.

It may seem that Krasinski is playing against type in Paramount’s highly acclaimed horror film, further separating himself from the role that made him a star: lovable prankster Jim Halpert of NBC’s The Office. But, truth be told, A Quiet Place has far more in common with Krasinski’s creative history than may be immediately apparent. While Krasinski’s recent tour in Michael Bay’s Benghazi thriller 13 Hours (2016) and his upcoming role as the titular hero in Amazon’s Jack Ryan series suggest an action hero in the making, Krasinski brings the intimacy from his dramedy background that separates him from his heroically performing peers.

In looking back on Krasinski’s screen credits, diverse as they may be, horror is not what would immediately come to mind in terms of expectations for the filmmaker directing his first feature for a major studio. Krasinski’s previous two features, Brief Interviews With Hideous Men (2009), which Krasinski adapted from the short stories of David Foster Wallace, and The Hollars (2016), showcase a filmmaker finding his voice in dramatic comedies and surrounding himself with a circle of former collaborators and screen partners. His other screenwriting credit, Gus Van Sant’s anti-fracking film Promised Land (2012), found success on the indie circuit. When looked at as a whole, Krasinski’s expanding filmography showcases a consistency of interest in the connections built between small-town relations struggling in the American lower middle class.

Within modern horror, so many directors’ success is born in the genre. Interviews with them often tell of filmmakers raised on a steady diet of Carpenter, Craven, Romero and Hooper. In many ways, modern horror filmmaking seems insular, with its most successful creatives rarely straying far from the macabre material in which they’ve made their home. Krasinski, however, comes from a different place. He told Playboy in a recent interview that he didn’t grow up watching horror, and what interested him about A Quiet Place was the social issues he could tackle through the genre’s lens. This places Krasinski in the same collection of filmmakers as It Follows‘ David Robert Mitchell and The Babadook‘s Jennifer Kent, who have worked within the genre, but do not consider themselves to explicitly be horror filmmakers, despite delivering some of the strongest examples of the genre in recent years. It’s certainly not bad company for Krasinski to be in. But to go even farther back, Krasinski’s nascent filmography has a connective tissue to the early filmographies of The Exorcist‘s William Friedkin and The Omen‘s Richard Donner; they also refrained from being bound to any classification of film and brought their consideration for empathetic dramas to the horror stage. Perhaps this is why A Quiet Place, for all of its modern concerns about protecting children in a world no longer safe for them, feels old-fashioned. This isn’t only evident in its small-town setting, and the awareness that what isn’t explained is far more frightening than what is, but also in Krasinski’s go-for-broke efforts to deliver a horror film like a filmmaker who won’t be revisiting the genre again and again. 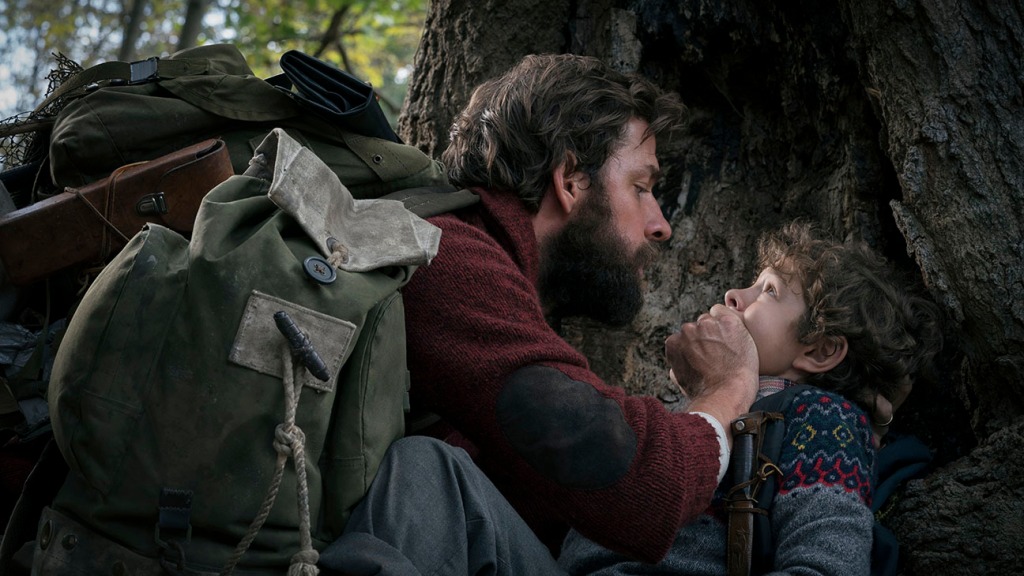 Much of Krasinski’s filmography, both behind the camera and in front of it, has focused on fatherhood. In Sam Mendes’ Away We Go (2009), Krasinski plays an expectant father who, along with his wife, played by Maya Rudolph, travel the country searching for the perfect place to raise their child. In his second directorial feature, The Hollars, Krasinski once again plays an expectant father, this time drawn back to his hometown when he finds out his mother is suffering from a brain tumor. And, in fact, one of the very things that led him to A Quiet Place was the experience of expecting his second child with wife Blunt during the film’s preproduction. The success of the film is entirely dependent on the roles of parenthood and his Lee and Evelyn’s (Blunt) successes and failures in protecting their two children (portrayed by Millicent Simmonds and Noah Jupe) from a world that seeks to harm them at every turn. Krasinski has cited Jaws (1975) as a central influence on this film, in terms of Martin Brody’s struggle to protect his children. It’s scenes like one between Brody and his son at the kitchen table that are extrapolated within A Quiet Place. It’s this kind of 1970s, pre-machismo father figure that Krasinski embodies. He’s a man who openly weeps, who shares the duty of provider and protector with his wife and saves his children not with a shotgun or an ax, but through his openly vulnerable love for them.

The film reveals Krasinski as a compassionate director who enables people to drive his stories. This may be an odd superlative for a filmmaker who’s just delivered a creature feature watched with a knotted stomach, clenched teeth and hands balled tightly into fists, but A Quiet Place is scary because the audience is made to care, and the people whose drama we cling to are fragile, regardless of their strength. In a world that seems to grow increasingly detached and cold, A Quiet Place proposes that we could use a little more warmth and compassion in our horror movies.