Lockington used real monkeys for his score, a move that’s appropriate, given that the Dwayne Johnson blockbuster’s breakout star is George, a gigantic, albino gorilla brought to life by actor Jason Liles.

For Rampage, Lockington researched Polynesian rhythms and recorded gorillas, though it didn’t go as planned.

“I read an article in National Geographic that discussed how gorillas hum. It was fascinating, so I decided to work with the gorillas and record them,” Lockington tells Heat Vision.

Lockington wasn’t pleased with the end result, but it led to another discovery.

“Ultimately, the humming wasn’t that interesting, but during the recording session one of the zookeepers said, ‘Well, they’re nothing like the howler monkeys of Costa Rica.’ I thought, ‘Oh, that’s interesting.’ Next thing you know, I’m flying down to Costa Rica to record the howler monkeys and run them through modular synths. It really provided for some great sounds,” he says.

Rampage, from director Brad Peyton, centers on primatologist Davis Okoye (Dwayne Johnson), who runs a wildlife reserve for animals that were orphaned by poachers. George and Davis communicate through sign language, but that ceases when George’s mind is clouded with aggression after he accidentally inhales a mutation-inducing gas that makes him grow to an enormous size. Davis must team up with a Homeland Security agent (Jeffrey Dean Morgan) and Dr. Kate Caldwell (Naomie Harris) to cure George and stop him and a giant wolf and crocodile from destroying all of Chicago. 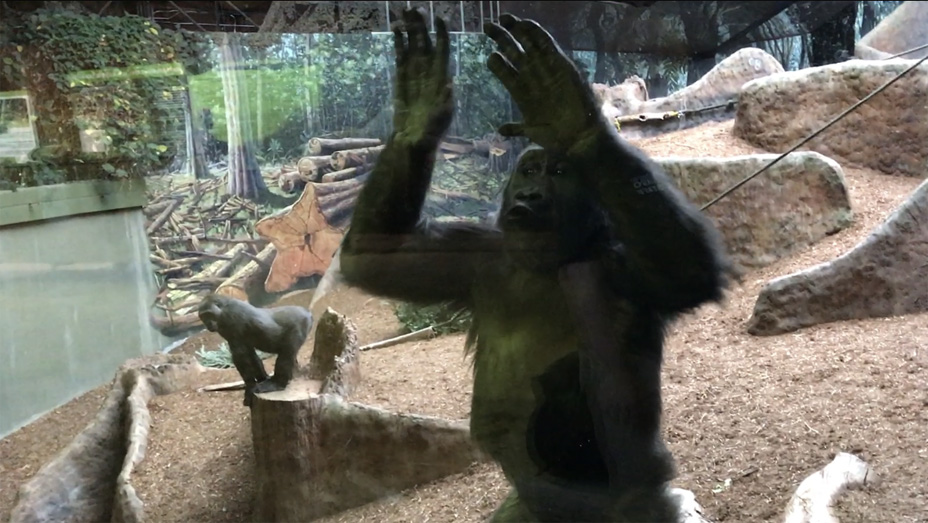 The film opens in a space station, where scientists have been experimenting with the mutagen. To achieve the sound of outer space for the opening sequence, Lockington relied on children from The African Children’s Choir, an organization started in Uganda for young children, some of whom have lost their parents.

“The choir performs for six months and then their education is paid for, which is an amazing setup. I recorded with them and we got several great textures,” says Lockington. “When you stretch out those textures and run them through modular synths, remodulators and a unison carrier wave, it creates this incredible sound. I literally took one second of the choir and stretched it for two minutes, and that’s how you get that space sound. When I played it for the producers, they didn’t even register that it was a choir.” 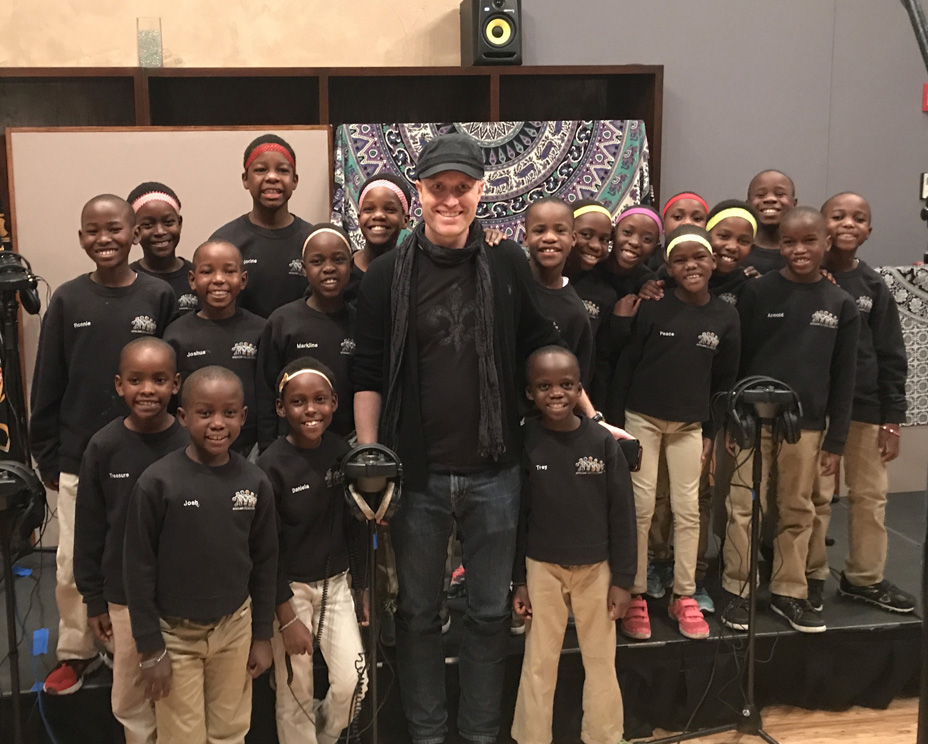 For Rampage, Lockington reveals that the initial cut of the film is incredibly close to Peyton’s final cut.

“It’s nearly identical to the first cut. Brad treats his director’s cut as if it’s going to be shown in theaters,” says Lockington, who worked with Peyton on Journey 2: The Mysterious Island and San Andreas. “There are very few reshoots, if any, on Brad Peyton films.”

Lockington’s copy of the film’s screenplay has numerous notes in the margins, showing how he starts crafting the musical landscape as he reads.

“Rampage was a unique challenge in that it had a hero, a female lead, three monsters, corporate villains, a cowboy government agent and a vigilante group headed by Manganiello that’s reminiscent of Black Water,” says Lockington. “It was a lot to juggle. Luckily, Brad and I were talking about the music extremely early, even before he started location scouting.”

Both Lockington and Peyton had high praise for Jason Liles, the performance-capture actor who plays George in the film.

“Knowing him as a person and seeing the finished product, it really comes through as Jason. He’s expressing himself through the CGI, which is amazing,” Lockington says.

“Jason really did a phenomenal job, not many people know this, but George’s eyes are actually Jason’s real eyes. The camera actually filmed his eyes and then they built the CGI gorilla around them,” says Peyton.

Listen to an exclusive track from the score:

Peyton notes that his longrunning collaboration with Lockington has been key to the success of his films.

“Andrew and I have done everything together, we’re always trying to cultivate new ideas within our working relationship,” says Peyton. ““Andrew has tried things with me that he wouldn’t attempt with other collaborators, because he knows there’s a safety net and a trust. I’m always excited to see his musical ideas — the more outrageous the better.” 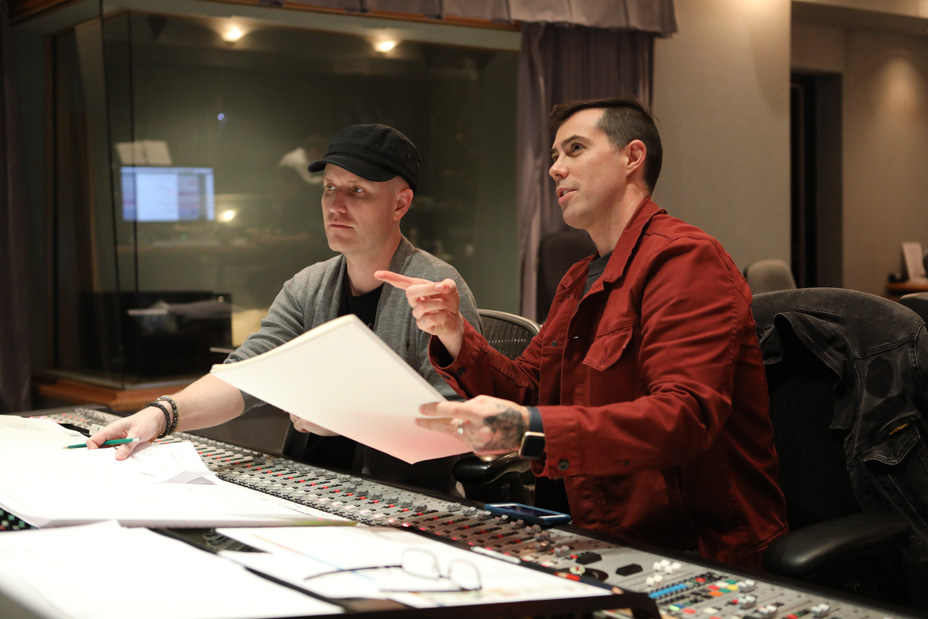 During Lockington’s wide-ranging chat with Heat Vision, the discussion moved to composers who get replaced on films (For example: Danny Elfman has replaced composers on Ang Lee’s Hulk and Joss Wheson’s Avengers: Age of Ultron).

“A lot of times when a movie isn’t working, by the time the filmmakers and studio figure it out, there’s only one thing that you can change and that’s the music,” says Lockington. “I think when composers are replaced it’s less about the quality of the music, and more about the context which the music provides.”

Lockington discovered this very early in his career.

“Years ago, I worked on a movie where one of the characters was in a completely different movie than all the other characters,” Lockington recalls. “They were playing the role more satirical than the other actors. So the director and I reinvented the score so that it supported that character’s satirical nature, putting everyone else in contrast. It made everything click in the film.”