For his emotional performance-capture role as George, an albino gorilla who’s best friends with The Rock, Liles studied gorillas for months and even stayed in character on set between takes.

Liles worked with stars he admires like Dwayne Johnson (primatologist Davis Okoye) and Oscar-nominee Naomie Harris (Dr. Kate Caldwell), but he didn’t have time to pal around with his co-stars on set. He had to tackle demanding scenes in which director Brad Peyton asked him to play a gorilla who’s not only having a panic attack while inside a cage, but also is freaked out because he’s growing to an incredible size after some genetic experimentation.

“[It was] very Daniel Day Lewis-esque. Not to that extent where it’s 24/7, but there were scenes where it was hours and hours — crying, snot coming out of my face — and just holding it and staying in a panic attack. It was exhausting,” says the actor of staying in character. “Makeup would come over and try to clean me up. I would just brush their hand away. ‘Leave it. Leave it alone if it’s not messing up the makeup.'”

Liles, who is six-foot-nine, got the role in part thanks to Colin Strause, the film’s visual effects supervisor. The two worked together on Netflix’s Death Note, and Strause advocated for Liles to play George.

Before filming, Liles spent months studying gorillas, and then moved on to three weeks of training with Kong: Skull Island‘s Terry Notary in the Santa Monica mountains. Hiking with Notary (famous for playing Kong) for hours while wearing arm extenders led to “more pain” than Liles had ever felt in his life, thanks to soreness that kicked in on day three. But the most challenging thing he learned to do was to forget the things that made him human, a goal he and Notary accomplished through silence and meditation.

“He told me from the get-go, ‘I don’t want you to pretend to be a gorilla,'” recalls Liles. ” We are going to shed all the things that make us human, that make you Jason. The society things of keeping eye contact and smiling and nodding and what’s polite and what’s impolite.’ We have to get rid of all of that. Because gorillas don’t know any of that.”

By the time Liles arrived on set, he had gotten good at shedding his human side; he met Johnson the day before shooting, but for the most part, he says that the action superstar only saw George on set.

“I was chasing extras. They were like, ‘Oh my gosh, It’s Dwayne Johnson!’ And I was trying to scare the crap out of them, because I’m like, ‘When they say action, I might kill you,'” Liles says. “I would stare down people until they were uncomfortable. I would charge people and literally make people fall over because they thought I was going to attack…. I would apologize at lunch and they’d say, ‘No, it’s amazing. Please keep doing it.'”

Harris plays a scientist who might be able to help George, and despite being a fan of Harris’ work, Liles didn’t introduce himself until they’d wrapped their first day together, because he didn’t want to break her illusion of George.

“I’m a dude in PJs with dots all over me with sticks for arms. I wanted people as much as possible to see George and not see a guy doing that. So I just stayed in my corner and did my thing,” he says.

Despite spending a lot of time on set with The Rock, Liles doesn’t feel like he got to know him well because he was always in George’s mind-set.

“I feel like I know Davis a lot more than I feel DJ. I looked at him as Davis every day. I don’t feel like Jason knows DJ that well. I feel like George knows Davis,” he says.

But Liles and Johnson did get to bond once a day, after the work was done.

Rampage is in theaters now. 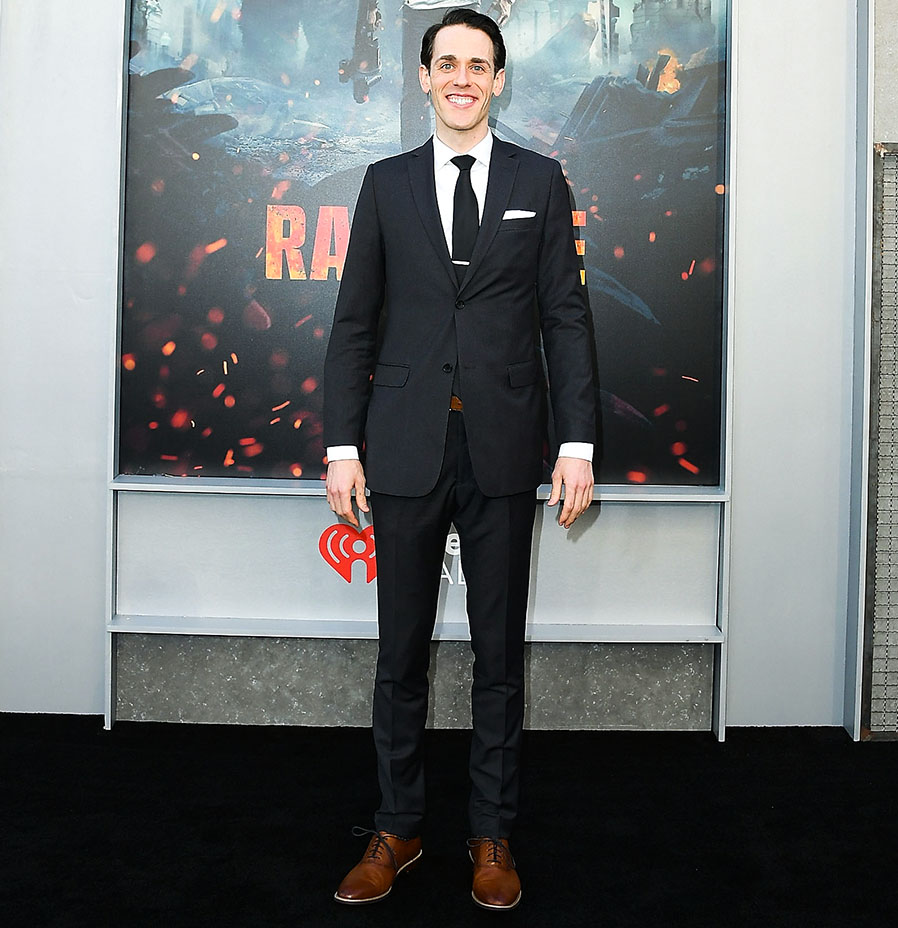