Continue to The Hollywood Reporter SKIP AD
You will be redirected back to your article in seconds
Skip to main content
April 15, 2018 12:00pm
Logo text

Dwayne Johnson’s latest action vehicle, Rampage, directed by frequent collaborator Brad Peyton (San Andreas) offers all of the city-wide destruction and monster mayhem that the big screen can contain. Loosely based on the arcade game of the same name, Rampage sees Johnson’s primatologist, Davis Okoye, contend with the effects of a chemical agent that mutates the genes of several animals — a gorilla, a wolf, and a crocodile — increasing their size and abilities. Much of the film is a means to witness Johnson’s charisma set against an expensive backdrop of helicopter crashes, building scaling and races against time, each defying the laws of science. While Johnson is the film’s biggest draw, the film balances his star power, with an equally impressive draw: giant monsters, or as the Japanese coined them, kaiju. Rampage may be primarily concerned with entertainment and its popcorn movie expectations, but it is firmly set within a much larger cinematic history that speaks to the immediate concerns of the era.

Gordon Douglas’ Them! (1954), a film that preceded Japan’s first entry into the realm of the kaiju film by several months and serves one of the earliest examples of the giant monster movie, contextualized our fears of the atomic age through massive insects. At the end of the film, Dr. Harold Medford (Edmund Gwenn) somberly stares out at the burning carcasses of the oversized ants that plagued America’s Southwest region and delivers the final lines: “When man entered the atomic age, he opened a door into a new world. What we’ll find in that new world, nobody can predict.” This sentiment, and the theme of atomic irresponsibility continued through the American horror films of the ‘50s and ‘60s as giant ants gave way to larger and stranger mutations, a result of nuclear tests and radiation experiments. In many of these films, there is a lack of direct blame. It’s science and curiosity that cause these things, but rarely if ever human evil, or governmental evil, that audiences can put faces to. Even Oppenheimer becomes a mythic figure, a poet consumed by misguided intentions and regret, rather than someone of questionable morals and unquestionable guilt. This oversight allowed for what were originally intended to be horror movies to become more entrenched in the world of science fiction escapism. Joe Dante’s Matinee (1993) best captures this era as the threat of the Cuban Missile Crisis and school bombing drills are juxtaposed against the thrill of big-screen monster movies that served as escapism while being based on the very threats we were meant to confront.

While the giant monster movies of Hollywood focused on the fears born of secrets buried in the desert or hidden away in laboratories, across the sea, Japanese film studios saw giant monsters as a way to directly contend with the horrors of Nagasaki and Hiroshima, confronting the ominous cloud of the nuclear age better than any civilization ever could. Ishiro Honda’s Gojira (1954) is of course the most famous of these films that used monsters as metaphors, though over time some of these giant monsters, Godzilla included, became Japan’s protectors, a means to reclaim their fears and reconstitute them into an action franchise. In the 21st century we’ve seen a new rise of the giant monster movie with several new versions of Godzilla and King Kong, along with The Host, Pacific Rim and its recent sequel, and even more recently Rampage. These films, which have borrowed from the giant monster subgenre’s shift from horror to science fiction in America, and horror to action in Japan, have spawned sequels and cinematic universes leaving us to wonder if there’s something more to the return of these movies, beyond nostalgia and IP value. 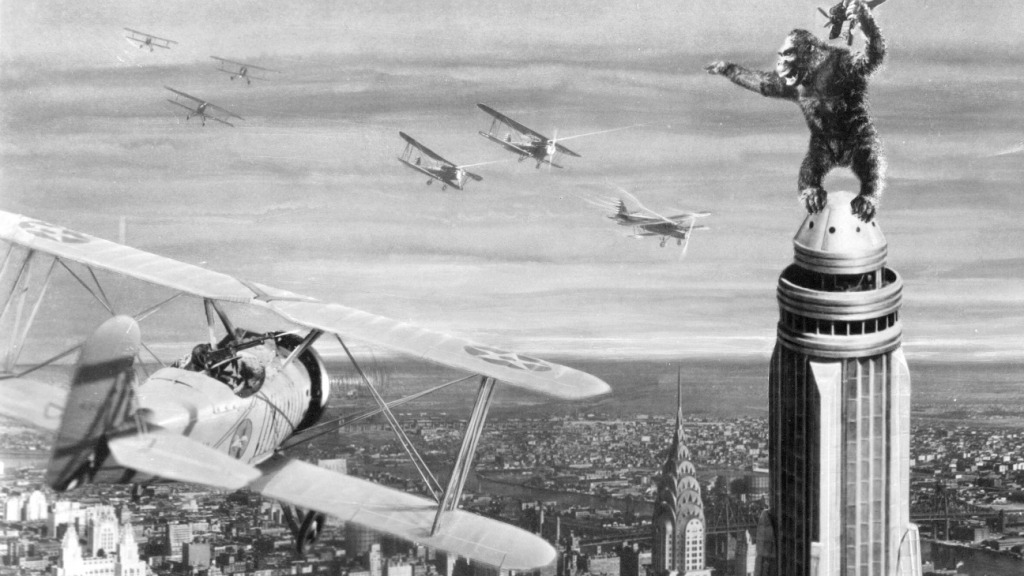 During the third act of Rampage as we witness Chicago being torn apart by monsters that level buildings, leaving debris and dead bodies in their wake, American audiences above a certain age can’t help but think of Sept. 11, 2001. This comparison of the destruction in our science fiction, superhero and disaster films isn’t a recent occurrence. Yet, nearly 17 years removed from that day, we keep returning to images similar to that tragedy in our American films. America’s return to the giant monster movie is similar to Japan’s initial production of those films and their ability to show their resilience and empathy. Pacific Rim (2013) tapped into the shared human experiences of tragedy and saw the world combine as a united front. Godzilla (2014) felt like a means of facing death in the event of disaster, while encouraging empathy and understanding for allies mistaken for enemies. But the threats in both of these films come from nature, whereas Rampage places the blame of destruction squarely on humanity’s shoulders.

While we’ve moved beyond the fear of the atomic age in our films, which in our current political climate seems only temporary, new fears have emerged. Behind the genetic mutations in Rampage is a gene therapy serum, introduced in the opening moments of the film. Developed by Naomi Harris’ Dr. Kate Caldwell, the serum was intended to cure most of the world’s diseases. While the film’s scientific explanation drifts toward the silly side of things, genetic editing stems from a very real world fear of disease and fallible bodies. In 2017, the CDC warned that the possibility of an infectious disease outbreak served as the biggest threat to a global society and could result in the loss of tens of millions of lives. Humanity’s attempt to find cures, and medical research has given way to the fictional threats of zombies, human mutations and now kaiju. Rampage couples this concern with biochemical warfare and the U.S. government’s contracts with pharmaceutical companies that care more about profit than people. This factor is represented by Malin Akerman’s villainous Claire Wyden and her brother Brett (Jake Lacy), both of whom made Dr. Caldwell’s serum into a weapon. Amid all of the explosions and monstrous roars, Rampage does what few American kaiju movies have done and finds a place in which to lay the blame.

Rampage makes no secret about calling out who the real monsters are, but it refuses to be hopeless about humanity and its ability to care and connect. For all the damage they do, these giant monsters don’t tear humanity apart but push them together, not only in the case of Okoye and Caldwell, but also the firefighters and civilians who pull each other up from the rubble. Living up to the legacy of B- movie monster clashes, Rampage offers plenty of escapism, but right under the surface is a contemporary evaluation of why these movies still matter — they give us the thrill we come for and a bit more. We’re in a new age of giant monster movies and Rampage just kicked the door open a little wider.

Box Office: Dwayne Johnson's 'Rampage' Beats 'A Quiet Place' After All With $35.8M