The arcade game Rampage is about some unfortunate folks who get morphed into giant monsters and proceed to whale on some skyscrapers until they run out of health and you run out of quarters. The movie Rampage is, for some reason, more complicated. The film, which has four credited screenwriters, grounds its silly premise as much as you can plausibly ground a movie about giant monsters. It doesn’t take everything seriously, but it takes all of it seriously enough to signal that there’s something deeply wrong with its approach to a game where, upon death, you transform into a tiny naked guy who slinks cartoonishly offscreen with his hands over his genitals.

From the marketing, you’d imagine Rampage should be content with being dumber than the average blockbuster, with its ridiculous premise and a tagline like “big meets bigger.” It does, after all, open with a scene in a space station where a scientist is attacked by a mutant rat. But from there, we spiral into plausibility — a malicious corporate brother-and-sister duo (Jake Lacy and Malin Akerman) have been funding experiments with CRISPR genetic editing, which is a real process. It’s explained multiple times in the film just so we’re clear, with one such explanation delivered by Naomie Harris’ character, who helped develop the process in hopes of saving her terminally ill brother. He died. She went to jail. Meanwhile, after the destruction of the space station, some of the samples make their way to Earth and infect a wolf named Ralph, a crocodile named Lizzie and a gorilla named George who is best buds with Dwayne Johnson. It makes sense that the wolf is giant and can fly and shoot porcupine quills, see? CRISPR!

If all this sounds like a lot for a dumb monster movie, my apologies, because there’s still more: George has a tragic backstory, The Rock is dealing with a mean case of misanthropy, and there are somehow even more characters like a PMC dude (Joe Manganiello!), a hardass colonel (Demetrius Grosse) and whatever Jeffrey Dean Morgan is doing as a greasy government agent who speaks with a passing resemblance to a Southern accent. Rampage even has a reason for the monsters to come calling on Chicago: the corporate siblings called them in with radio waves to help destroy the evidence by, uh, destroying the city. Wide swaths of the movie are dedicated to explaining each and every one of these details right into the camera, from how the summoning radio works on down to what agency the G-man works for. Rampage tries very hard to appear at least halfway plausible, but plausibility is overrated.

The problem isn’t that the movie is unfaithful to the source material, because there’s barely any source material to be faithful to. No, the problem is Rampage’s calculated inoffensiveness. It fits snugly into the current tentpole template, where things are a bit jokey and PG-13 violent and grimly serious when they need to be and, above all, grounded. A razor-thin scientific basis for Porcupine Wolf is what we all crave from our Dwayne Johnson vehicles, apparently.

There is some question of who, exactly, is asking for this sort of faux-realism in a nonsense monster movie. Rampage isn’t exactly gunning for prestige status, but its reams of exposition suggest that if feels the need to sell us on what we’ve already bought: big monsters breaking stuff. What it demonstrates above all is a wide distrust of the audience’s intelligence, where we are considered too discerning to just roll with the concept of giant monsters but also gullible enough to have the stupidity of giant monsters explained away with more stupidity. Rampage has no imagination, because it and movies like it believe we don’t have any imagination, either. Instead, they coddle. They are careful not to leave us to our own devices for too long, careful to explain everything away because they believe if we try to think about it ourselves, we will not be able to accept it. Dollars might be lost. 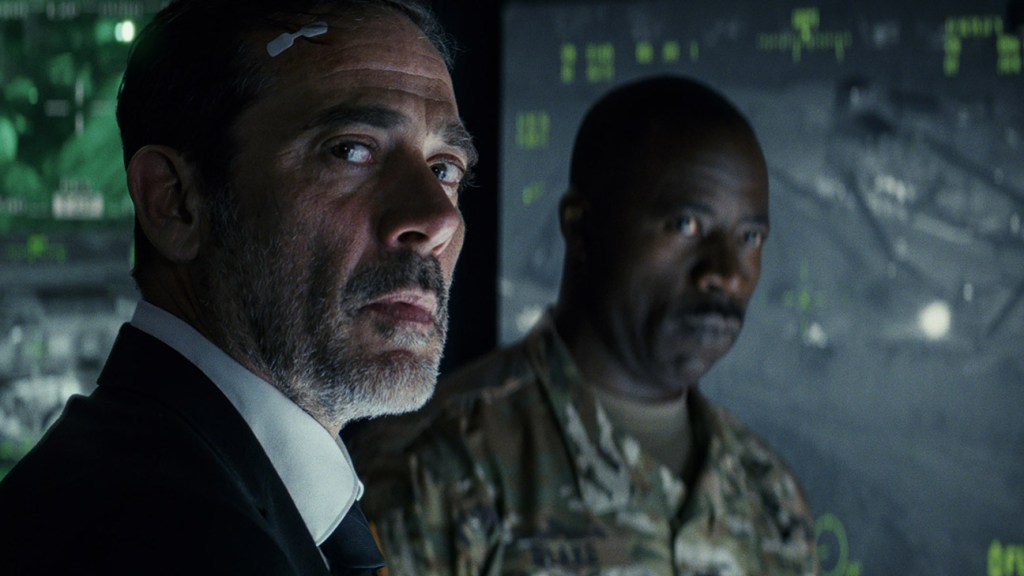 Stupidity and camp are not nearly so widely appealing as the affected semi-realism upon which we construct our cinematic universes. But especially here, such a tone translates directly to a certain joylessness, as well as a visible self-consciousness. The jokes in Rampage feel defensive, as if the movie is rushing to make fun of itself before your lips can even begin the process of a sneer, eager to be liked. The only person who seems to be having any fun is Morgan, a scenery-swallowing vortex with a Foghorn Leghorn accent, a weird drunken swagger and a whole mess of ridiculous lines that mostly conclude with calling somebody “son.” He is the only personality visible beneath Rampage’s constructed exterior, a reminder of what the pic might have been if it wasn’t so focused on hiding its stupidity about as effectively as three kids stacked in a long trenchcoat.

As a game, Rampage was made as an obvious take on well-known movie monsters like Kong and Godzilla. But their movies — even Peter Jackson’s bloated 2005 Kong film — don’t spend nearly so much time trying to explain themselves. With frequent involvement of aliens, Godzilla films in particular tend to wear their silliness proudly, demonstrating an invention and personality entirely absent from Rampage. But then, the Godzilla films aren’t for everyone. Despite the fame of their starring creature, the perceived silliness tends to turn people off, and the 2014 American remake was consciously serious. Rampage is grounded, because here being grounded means middle-of-the-road, means inoffensive, means hitting as wide of an audience as possible. But in trying to hit everyone, Rampage is too bland to hit anyone.