Director Julia Ducournau’s cannibal horror film Raw made headlines when an ambulance was called to a packed early-morning screening at the Toronto International Film Festival, where multiple audience members passed out while viewing the intense film.

The 33-year-old French director’s film follows a vegetarian veterinary student, Justine (Garance Marillier), who is forced into a college hazing ritual that leaves her with a newfound taste for flesh — burgers, shawarma and … otherwise. Raw has garnered positive reviews coming out of its run on the festival circuit, which included a premiere at Cannes and a stop in Park City for Sundance, and it will finally hit theaters in a limited release on Friday.

Ducournau spoke with Heat Vision about humanizing cannibals, candy fingers and Korean cinema (and a couple of other things in between).

What was the choice behind making a cannibal movie your debut feature?

I was talking with my one of my producers about cannibal movies, and I said “You know what, cannibals are always portrayed as a “they.” For me, when I hear “they” I think of creatures from outer space or zombies. I told him that if it was up to me and I tried to make a cannibal movie, I would make it an “I” movie, you know. Like “I,” “me”! I try to understand what is happening when someone becomes a cannibal. It’s not like before she is a human and after she is not human anymore. All along, she is human! [Justine] doesn’t kill, and yet she has eaten human flesh, so what does that make her? And what does it make us if we can relate to her?

Also, I’ve worked around bodies a lot. I’m obsessed with bodies, and I am very interested in filming them. My question is: “Where is the humanity in the body?” For example, if your body has a rash, what does it say about you? Who is in control?

Body horror seemed like the ideal genre for Raw, as it follows a young female, a demographic that has so much emphasis placed on their bodies.

Filming bodies and talking about bodies is a way to aim at a form of equality in my audience. Everyone has a body that is suffering or is aching or desiring or has needs. Sometimes it can be gross, but that can be endearing. This intimacy of the body, for me, is a channel toward equality. I do believe that the female body is usually boxed or niche. It is sexualized and glamorized but there is no truth there; it is a fantasy for men and women. And you can’t relate to a fantasy. You can’t relate to a mirage. You have puked and peed and have dark rings under your eyes and pores and sweat, and all of this goes beyond gender. When you watch Leonardo DiCaprio in The Revenant, everyone can relate to how he is suffering in his body. We don’t think it is only men who can relate to that. 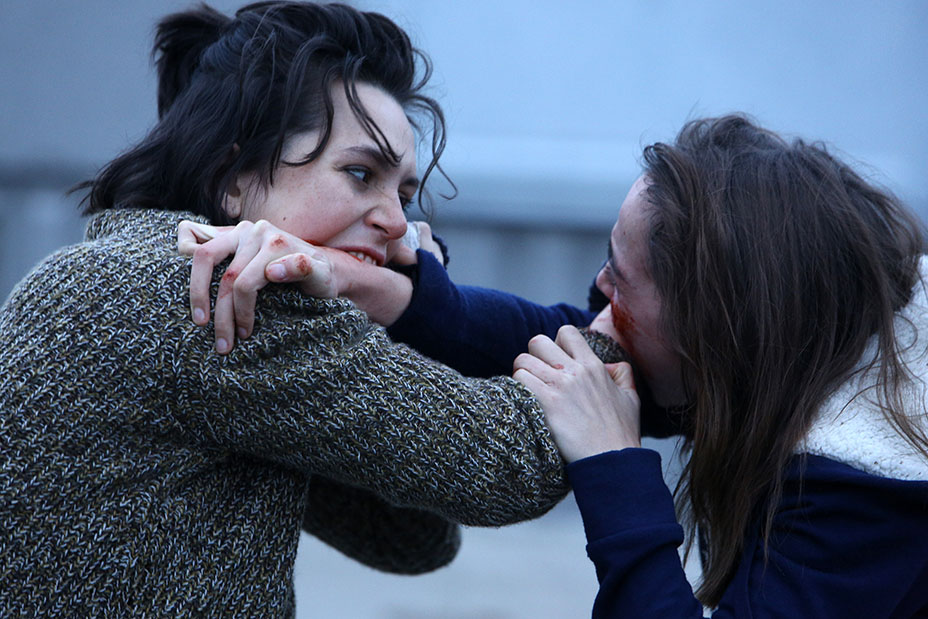 From a directorial perspective, how did you work to ground the emotional and physical performance of actress Garance Marillier, who is playing something as heightened as a young cannibal?

For me, directing actors is way closer to choreography and music than to literature or the script. I like to talk about the characters for months with the actors — how they are like and not like them, what they like and don’t like. So when I am on set I only need to talk to their bodies. For Garance, she has a lot of extremely physical scenes, so I like to talk through the filming so she doesn’t feel alone.

Working with prosthetics, the process is very different. When you work with prosthetics as much as I do — I really don’t like CGI that much — you have to talk about psychology. At the beginning, it is always hard for actors to believe that a piece of candy is a real finger, so you have to contextualize more than I would normally. But, for Garance, the finger is her partner in the scene.

From the wide shots to the muted color palette, how did you go about creating Raw‘s specific look?

I thought it would be interesting to use the scope to treat the body the same way I would treat a landscape. Everyone wants to make wide shots, but I also wanted to fill the screen with skin. In my head, it was all about the relationship between the very wide and the very close. For lighting, my references came from a lot of Korean DPs. I love Korean cinema. The main prerogative was that we really need to see the skin — I didn’t want makeup. The light was very raw, and brutal.

Were you at all surprised by the reaction audiences have been having? Did you anticipate this type of response?

It took me five years from the first word to Cannes, so for five years I was just crossing my fingers that one person on the planet would want to see my movie and would find any interest in it. So, when I get a lot of reactions, whether they are positive or negative, it is very overwhelming and hard to decipher. When I was making the movie, I knew it was a outside of the box, but I didn’t anticipate [the responses]. But I always knew that it would divide people, that’s for sure.