Continue to The Hollywood Reporter SKIP AD
You will be redirected back to your article in seconds
Skip to main content
March 29, 2018 12:00pm
Logo text

[This story contains spoilers for Ready Player One.]

In the dystopian future of Ready Player One, everyone and their aunt is plugged into the OASIS, a VR sandbox where participants can do anything and look like anybody. They can ski down pyramids disguised as Ryu from Street Fighter; they can visit a planetary casino and roll dice in the form of Jason Voorhees; they can visit room 237 in the Overlook Hotel with the Teenage Mutant Ninja Turtles. The possibilities are as endless as they are banal.

Ernest Cline’s novel was published in 2011, a year after Warner Bros. won the rights to adapt it, which means Steven Spielberg’s CGI nostalgia rumpus is an event eight years in the making. But back in 2012, Rich Moore and Disney Animation beat WB to the punch with Wreck-It Ralph, a movie set inside a video game world, told through the eyes of video game characters instead of the players controlling them. On its face, Wreck-It Ralph reads as spiritual kin to Ready Player One, both its ancestor and descendant; the shift in perspective, however, is one of two major differences separating them.

The second and most important difference is how Wreck-It Ralph approaches preexisting intellectual properties compared to Ready Player One as the foundation of its plot. Wreck-It Ralph doesn’t take every opportunity to overstuff its scenes with endless direct references to those IPs; it treats its nods to old classics alongside new favorites as flavoring without distinguishing any of them by brand. Take Ralph, the villain in Fix-It Felix Jr., a naked riff on Donkey Kong; Ralph’s role is, well, wrecking stuff, and Felix’s role is to fix everything Ralph wrecks. Donkey Kong is the obvious basis for Ralph, but Ralph isn’t Donkey Kong. He’s just Ralph.

Maybe this is a case of splitting hairs, but they’re hairs worth splitting. Watching Ready Player One overwhelms the senses whether you’re a veteran pop culture vulture or a casual partaker. If you’re the latter, your head will spin from the sheer volume of cameo appearances; if you’re the former, you’ll get dizzy picking out those cameos as they’re rushed before you. Mortal Kombat. Gundam. Battletoads. Starcraft. A Nightmare on Elm Street. King Kong. Child’s Play. Jurassic Park. (Very clever, Steven.) Dungeons & Dragons. Monty Python and the Holy Grail. The parade of genre favorites, geek iconography and gaming avatars marches well over the line of “too much.”

But that’s only because Ready Player One browbeats the audience into accounting for the cavalcade of walk-ons. The plot centers on OASIS creator Jim Halliday’s (Mark Rylance) Easter egg hunt for ownership of the VR universe. So perhaps it’s fitting the entire film becomes an Easter egg hunt unto itself; the Herculean task of sussing out each of its pop culture guest stars from all the rest is its foremost component. Wreck-It Ralph, on the other hand, invites us to play detective with its reference points by folding them into an otherwise original backdrop. They’re window dressing rather than the actual window. The contrast feels minor, but it’s meaningful enough to elevate Wreck-It Ralph‘s gentle homage over Ready Player One‘s shameless bombast. 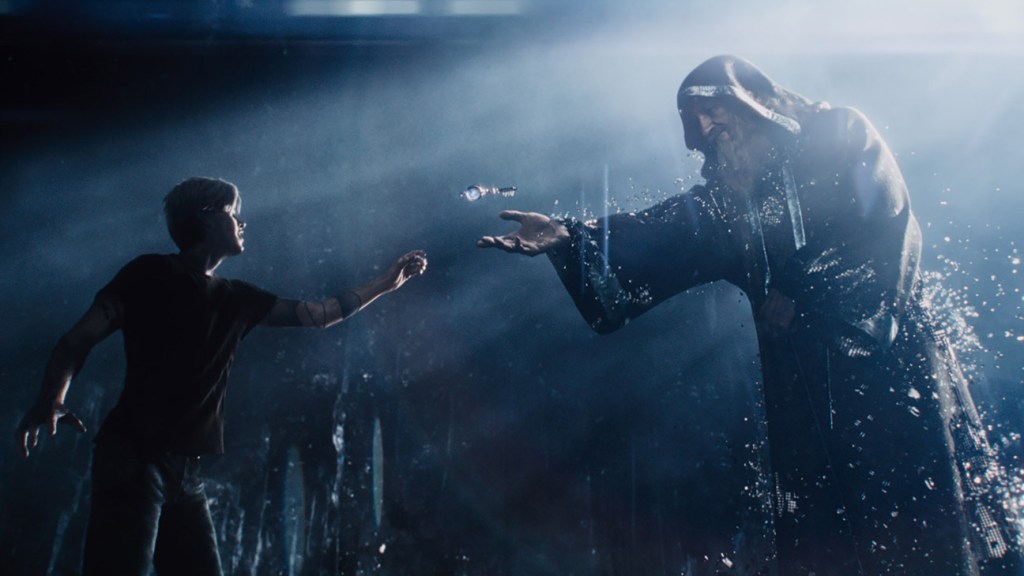 Identity is essential. Wreck-It Ralph is its own movie regardless of its referential nature, while Ready Player One never amounts to more than the sum of its references. Consider the movie’s climax, which hinges on inside baseball knowledge only a longtime gamer would possess; Cline, who co-wrote the script with Zak Penn, couches narrative resolution in the history of the Easter egg as a gaming tradition. Ready Player One‘s ending literally depends on the protagonist’s familiarity with gaming lore and not his growth as a character. Wreck-It Ralph does the opposite by paying off Ralph’s gradual transformation from a lonesome, curmudgeonly brute to a self-sacrificing hero over the course of the film. That’s a great capper for a picture brimming with love for video games that refuses to let that passion hamstring its plot.

Ready Player One‘s narrative is overtaken by slavish devotion to reproducing the gaming experience for the big screen. That’s a bad moviegoing dynamic made worse by our distance from the game itself: We’re not the ones in charge of the action. Spielberg is. With exceptions — say, League of Legends or Overwatch — watching other people play video games is about as exciting as watching paint dry. (Imagine watching an HGTV show without the benefit of time lapse. That’s more or less how you’ll feel during a few of Ready Player One‘s key sequences.) Wreck-It Ralph is free from such design constraints, so Moore along with screenwriters Phil Johnston and Jennifer Lee have a ball blending its influences into settings and characters that ultimately become unique to the film’s aesthetic. They’re not interested in hiding their source materials because they don’t have to; their combined inspirations metastasize into pop filmmaking that stands alone.

Ready Player One, far too encumbered by the weight of its own inspirations, never manages to do that. The referentialism is foregrounded in the world its characters live in; their world is our world, but 25 years in the future and in much, much worse shape. (On the plus side, they’ve got way better high-tech toys.) Maybe if the movie cared as much about world-building as Wreck-It Ralph, the referentialism wouldn’t give us sensory overload, or maybe it would, but the overload would have firmer grounding in reality. Wreck-It Ralph‘s world is every bit as digital as Ready Player One‘s, but that digital world is the end result of referentialism instead of a vehicle for it. The basic conceit doesn’t stop the film from feeling real — as Halliday reminds us, reality is better than a game.