Steven Spielberg has returned to the world of blockbuster fun with Warner Bros.’ Ready Player One, which he brought to its Hollywood premiere on Monday.

The filmmaker noted it felt good to make a popcorn flick following awards-season movies like last year’s The Post and 2015’s Bridge of Spies.

“Honestly, it was a relief to do this film. I’ve done a lot of history films lately, but this is a real crowd-pleaser,” the director told The Hollywood Reporter. “It reminds me of the days when I did Jurassic Park and Raiders of the Lost Ark. I had so much fun on this, it was like a vacation, even though it was incredibly hard work.”

Ready Player One stars Tye Sheridan as Wade Watts, a young man struggling in the harsh world of 2045. Watts finds himself drawn to the escapism offered by the virtual reality world known as the OASIS, which was created by the brilliant and eccentric James Halliday (Mark Rylance), who left his immense fortune and total control of the OASIS to the winner of a three-part contest. Watts and his team of friends known as the High Five tackle the three challenges in the hopes of saving the OASIS and being crowned its heir.

Hannah John-Kamen, who plays the film’s main female antagonist, was surprised by her first interactions with Spielberg, which involved more music than she expected.

“What’s funny is that I would sing show tunes with Steven in-between takes. We did Singing in the Rain, Guys and Dolls, a few Frank Sinatra tracks. Steven’s got a good voice,” she said.

The film, based on Ernest Cline’s best-selling novel, brought a diverse crowd of fans to Hollywood Boulevard for its star-studded premiere. A DeLorean was parked at the front of the massive red carpet, and Back to the Future star Christopher Lloyd enjoyed posing with the car once again and supporting his friends.

“This is my first time seeing the film. I’m so glad to be here in support of Alan Silvestri and Steven Spielberg, they’re part of the Back to the Future family,” said Lloyd.

Silvestri, who scored the Back to the Future trilogy as well as Ready Player One, was also glad to go for another ride in the DeLorean, which is featured prominently in the new movie, just as it was in the original 1985 classic Spielberg produced.

“It felt like seeing an old friend again, and getting to work with Steven as a director was the icing on the cake,” said Silvestri. 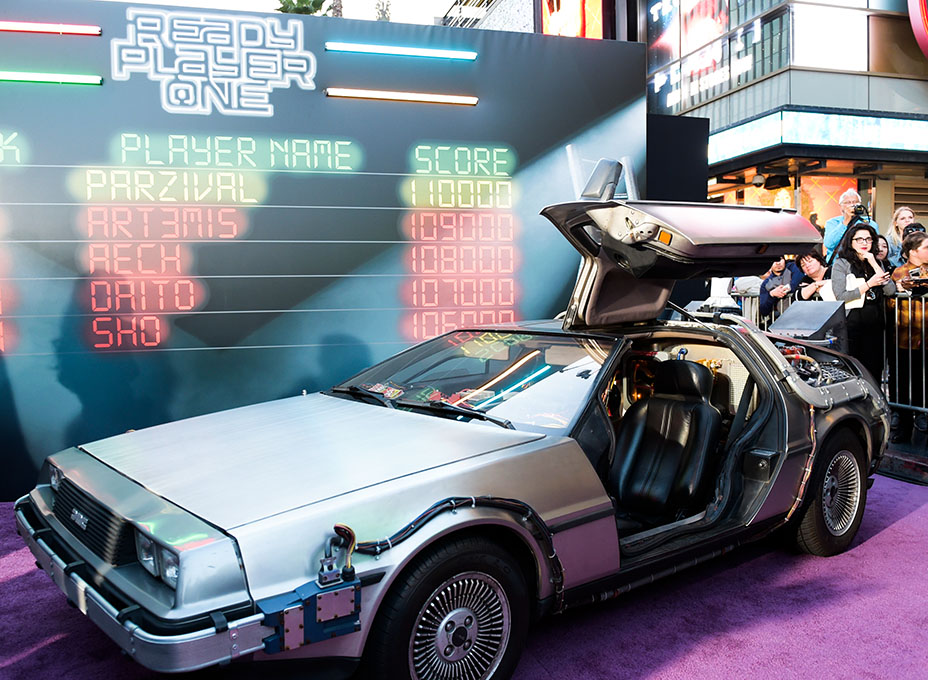 Spielberg also wanted to tap into the nostalgia of the films by reviving parts of their musical DNA.

“With this score, Steven was very specific about what he wanted in certain places,” with the pair paying musical homage both to Back to the Future and another famous movie that THR will keep secret for spoiler reasons. “In both instances, Steven wanted an exact note-for-note recreation of the original music.”

For screenwriter Zak Penn, it was a constant grind on set as things were often changed as they shot.

“Steven is very improvisational, and as a result, we had to rewrite a lot of scenes on set. Whether that’s helping the actors find the dialogue and make it more natural, or a complete reworking of the initial idea,” said Penn.

“There’s a lot of complicated intercutting in the film,” said Penn. “If something changes in the OASIS, I then have to go and rewrite what happens in the real world. It was almost like a time-travel film in the regard that we had to constantly keep track of how changes would affect the opposing narrative.” 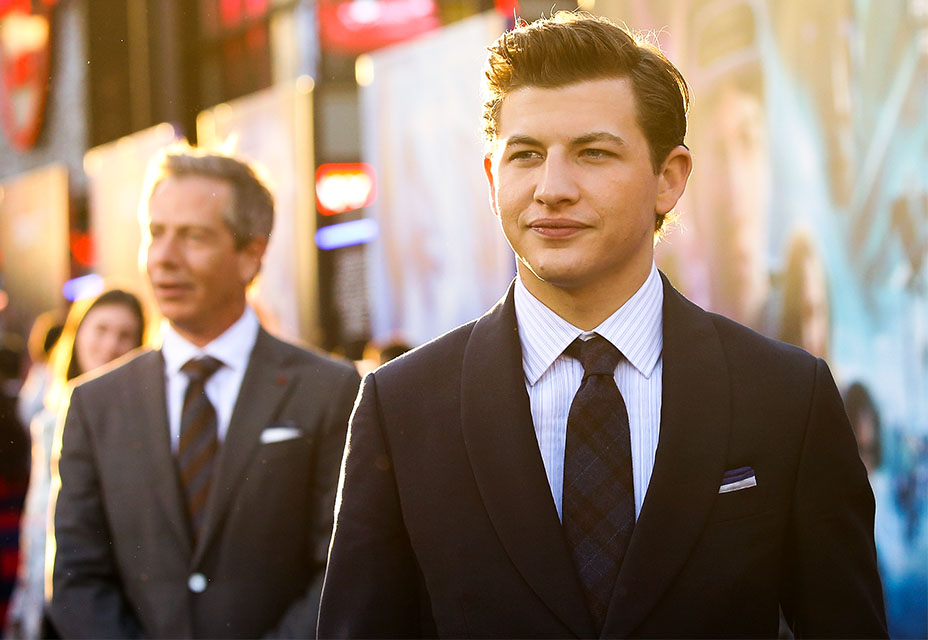 Cline, who also served as one of the film’s screenwriters, discussed his battle to keep a famous dancing scene from his book alive. “The Distracted Globe, or Zero Gravity Dance Club, was a scene I’d kept in every draft of my script. The studio wanted it taken out because it was just incredibly expensive. It was an amazing set piece and probably my favorite scene, but it had to go,” he said.

This decision was reversed within days of Spielberg joining the project. “Once Steven came on board, he said, ‘Why isn’t this in the movie?’ They give him the same reasons they gave me and he said, ‘I don’t care, it’s going back in the movie.’ And you’ll see it tonight.”

Simon Pegg danced multiple times on the carpet, showcasing a lesser-known side to the comedic actor.  He compared his character Ogden Morrow, the co-creator of the OASIS, to Apple’s late leader Steve Jobs.

“Ogden is definitely the face of the company with limited capabilities, whereas Halliday is the genius with all the knowledge…he’s the Steve Wozniak to complete the Apple analogy.”

Pegg, a longtime star of the Mission: Impossible franchise, promised a much different movie this summer when the sixth installment, Fallout, opens July 27.

“[2015’s] Rogue Nation was more of a buddy film, with some great set pieces and thrills. Fallout is a continuation of Rogue Nation, but it’s a much darker film,” said the actor. “I think people will be pleased with the evolution that we’ve been able to achieve with this film.”

Ben Mendelsohn, the Emmy-winning actor of Netflix’s Bloodline, portrays Ready Player One’s antagonist, Nolan Sorrento. Mendelsohn is a veteran of bad-guy roles, including working with Christopher Nolan on The Dark Night Rises and Gareth Edwards on Rogue One: A Star Wars Story.

Sorrento has gambled his entire career on solving Halliday’s three-part contest in order to monetize the OASIS for his evil corporation. This means failure is not an option. Mendelsohn purposefully wanted to reinterpret the character from the book, so that his life off the page wasn’t a replication.

“You always want to make the material fresh, and if you turn up on the day with the right attitude, you’ll find something,” said the actor. “Working with Steven on the character and the camera movements was vital to this version of Sorrento. It was really important to make the shots land with a punch, and luckily they did.” 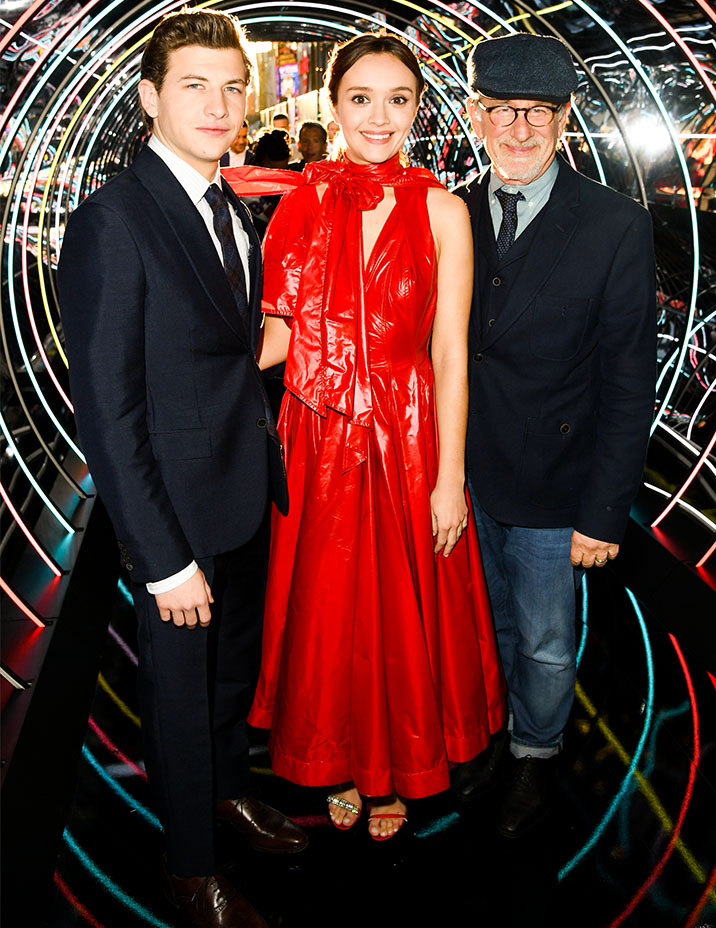 The afterparty spared no expense, recreating an entire arcade full of 1980s games that occupied players the entire night as music played from artists including Queen, The Bee Gees, Men at Work, The Outfield and Rick Springfield.

Several VR booths were set up with replica headgear and hand controls from the film. Players were able to enter the OASIS and battle on Planet Doom with dual blasters. Pegg and Mendelsohn both mingled with fans throughout the evening; Mendelsohn was particularly warm and celebrated a fan’s birthday that happened to fall on the night of the premiere.

“Steven is someone whom I completely trust and I would do anything to work with him,” Pegg said. “If the role only required me to wash a car, I’d do it for Steven.” 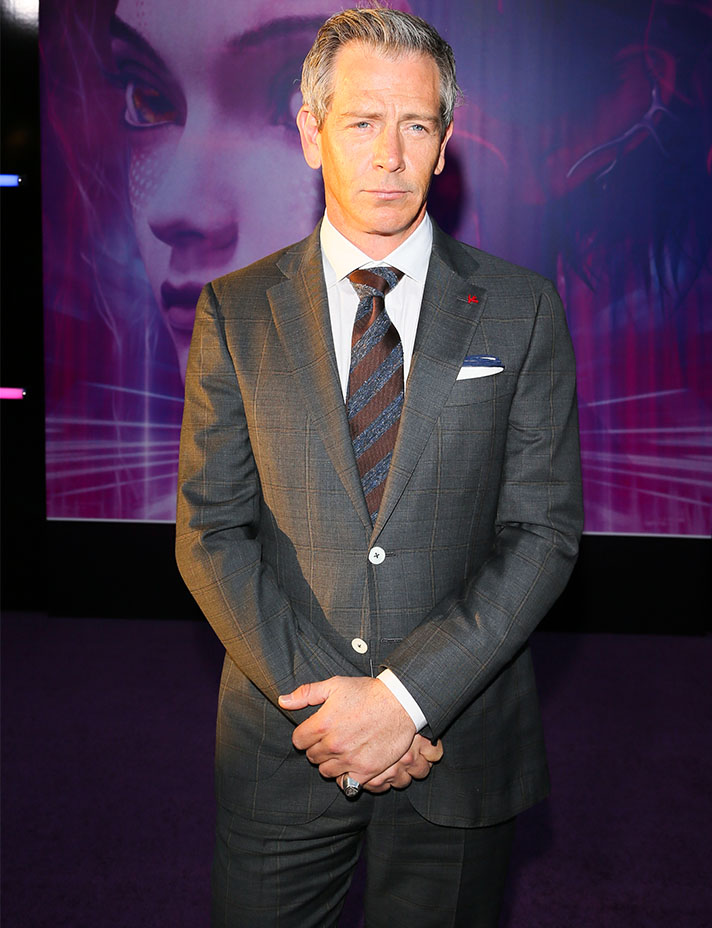